Today’s ADAS (advanced driver-assistance systems) functions do more than reduce the risk of injuries during a crash. Many features, such as autonomous braking, collision avoidance, and the ability of a vehicle to determine whether a lane change is possible, are designed to help avoid accidents altogether.

ADAS features, only offered to drivers when purchasing a new vehicle as embedded solutions, first appeared as options on high-end luxury vehicles. Unfortunately, to date it hasn’t been economically feasible for all cars to have all ADAS technologies. But carmakers and Tier-1 suppliers are striving to make driving-assistance features available in as many cars as possible. This means that more vehicles need to be capable of cost-effectively sensing, processing, and acting on real-time data (Fig. 1).

1. The influx of information coming into the car underscores the need for SoCs to quickly and efficiently manage multilevel processing in real time, all while operating within the system’s power budget.

The good news is that ADAS has become more widespread across multiple price points and car models. AAA examined 2018 model year vehicles to identify the percentage of ADAS technology that comes standard. According to AAA, at least one ADAS feature was available in 92.7% of new vehicle models in the United States in 2018.

AAA found the following three features to be the most prevalent:

Most ADAS safety features are comprised of sensors such as cameras, radar, LiDAR, ultrasonic, and infrared systems as well as a number of actuators. Camera-based systems give drivers visual cues to make them more informed and aware of their surroundings. Multiple cameras (four to six) placed around the car provide a 360-degree view.

Front-camera systems can use a mono or stereo camera setup. The main advantage of a mono camera is that it can be installed at low cost and the degree of freedom for the installation location is high. These cameras are expected to be widely used as parking sensors due to their increasing penetration in economy cars, especially in emerging economies.

More sophisticated stereo cameras are useful to obtain 3D information. These visual systems measure distance and lateral position to various objects such as pedestrians, bicycles, and vehicles with higher accuracy. However, stereo-camera systems are more expensive compared to mono-camera solutions. All camera systems suffer from the fact that they’re easily affected by poor weather conditions.

An important advantage of radar over cameras is that radar is resistant to nighttime conditions, or when visibility is bad due to weather. Radar is useful for vehicular applications such as parking assist, lane-change assist, and car safety applications like autonomous braking and collision avoidance. Radar also is utilized as a sensor to detect pedestrians and other cars.

Light detection and ranging (LiDAR) is a sensing method that detects objects and maps their distances. The technology works by illuminating a target with a laser pulse and measuring the characteristics of the reflected return signal, helping vehicles “see” other objects like cars, pedestrians, and cyclists.

Since it was first introduced into automotive applications, the cost of LiDAR has dropped precipitously. An early model used by companies developing self-driving prototypes cost about $75,000—clearly not practical for mass production. But the cost has come down. At the 2020 Consumer Electronics Show (CES), for instance, suppliers showed off LiDAR with a range of 100 meters and a cost of $100. While not as powerful as top-of-the-line LiDARs, which boast ranges of 200 meters or more, the more compact low-cost model—smaller than a deck of playing cards—allows automakers to easily embed it into their vehicles (Fig. 2). 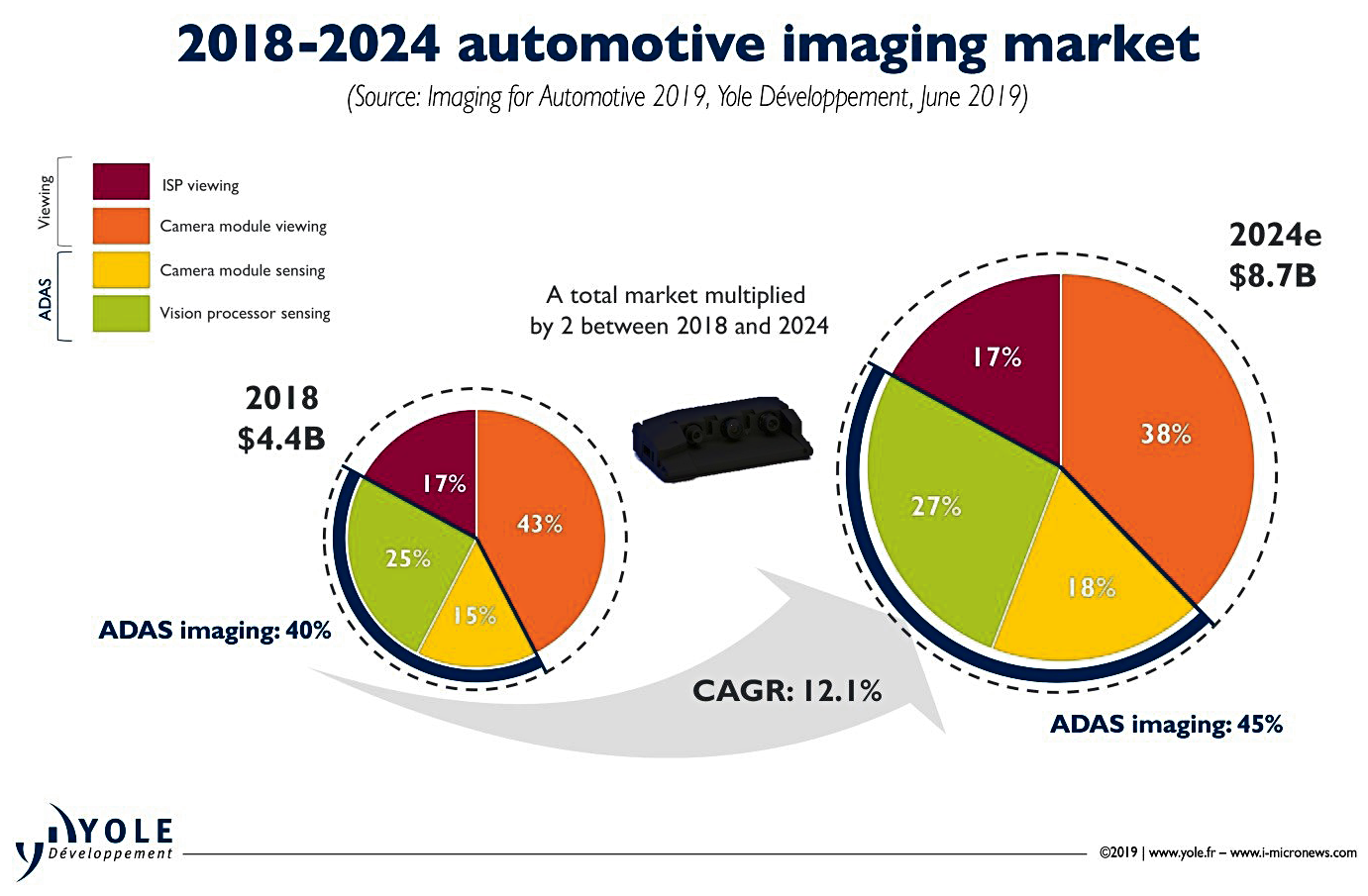 2. Market research firm Yole projects a 12.1% CAGR for automotive visual systems from 2018 to 2024. In a typical vision-based system camera, data is captured via a serial interface and then sent to a vision-processing hardware engine. (Source: Yole Développement)

More cameras, radar, and LiDAR with higher resolution all translate into stringent requirements for high-performance processing. Processors for ADAS applications need to be able to combine megabytes of visual or other sensor data to produce an interpreted environment for the car.

To make ADAS applications affordable in low- and mid-end vehicles, it’s important to have a cost-effective processing solution.

If nothing else will convince you that available system-on-chip (SoC) solutions can scale from more simple cases (fewer sensors, lower resolutions) to the most complex cases without compromising basic ADAS features, the newest member of TI’s Jacinto 7 processor family should.

The TDA4VM SoC for ADAS enables critical features for automated parking, such as surround view and image processing for displays (Fig. 3). Its 8-Mpixel front-camera support enables the car to see farther and clearer in all driving conditions. This SoC supports four to six 3-Mpixel cameras while also fusing other sensors such as radar, LiDAR, and ultrasonic systems on one chip. TI’s new processor also uses just 5 to 20 W of power, eliminating the need for active cooling. 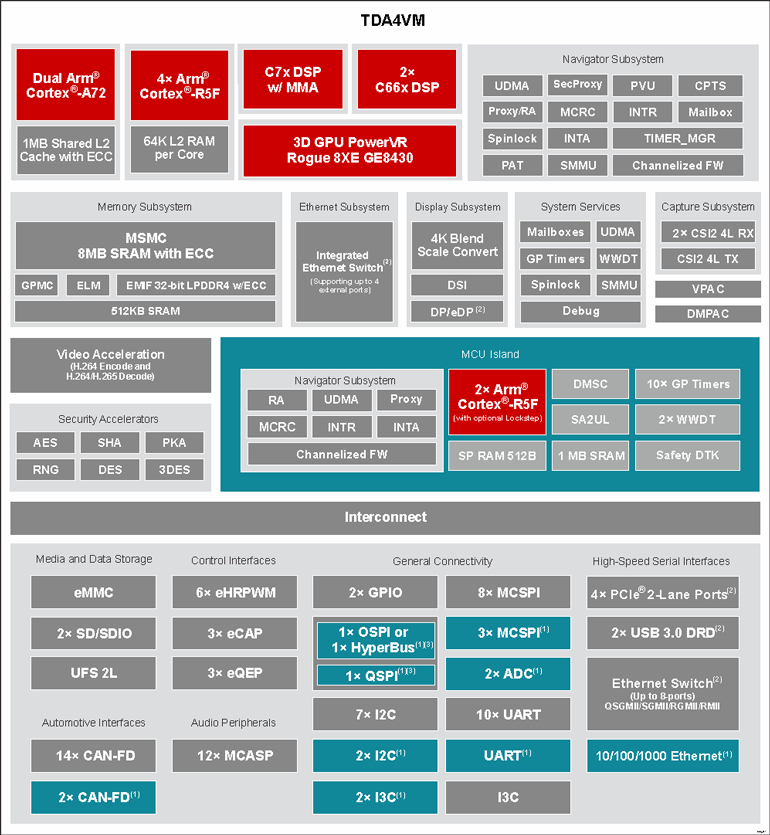 3. The TDA4VM processor family is based on the Jacinto architecture, targeted at ADAS and autonomous-vehicle (AV) applications. (Source: Texas Instruments)

Key cores include a digital signal processor (DSP) with scalar and vector cores, dedicated deep-learning and traditional algorithm accelerators, Arm and GPU processors for general computing, an integrated 7th-generation imaging subsystem (ISP) that includes the flexibility to process a broader sensor suite, and support for higher bit depth. The SoC also features a PCIe switch and Gigabit Ethernet switch to handle the throughput of the many sensor inputs and an isolated safety MCU, eliminating the need for an external system microcontroller (MCU).

The functional safety MCU makes it possible for OEMs and Tier-1 suppliers to support both ASIL-D safety-critical tasks and convenience features with one chip.

A new “MMA” deep-learning accelerator enables performance up to 8 TOPS. In addition, a single software platform alleviates system complexity and cost by enabling developers to reuse their software investment across multiple vehicle domains.

Implementing ADAS features on low- or mid-level cars isn’t easy. And yet recently, a number of ADAS applications that only appeared in high-end cars have trickled down to the low- and mid-level vehicles.

With governments focusing on safety as a top priority, if industry doesn’t take the lead sooner or later, mandatory safety equipment standards will be imposed. For example, in 2018, some 25,000 people died on European Union roads and 135,000 were seriously injured. In response, in April 2019, the EU Parliament passed legislation making it mandatory—starting in May 2022 for new models and in May 2024 for existing models—to have an emergency braking system as well as an emergency lane-keeping system on passenger cars and light commercial vehicles (it was already compulsory for trucks and buses).

To make ADAS available across the board for new model cars, the technology will have to become even more affordable. But as we have shown, the mainstream use of ADAS in modern-day cars is being made possible by reducing the size and complexity of individual components such as sensors, as well as integrating more processing functions into comprehensive IC platforms. These trends are complementary because smaller, less-expensive components are needed to build larger systems affordably.

What’s more, in terms of reining in ADAS costs, solutions are accommodating an open software-development methodology, making it possible to reuse the resulting code and preserve efforts made in development and testing.

Considering the headwind of slowing demand for new cars challenging automotive markets, the democratization of ADAS is likely to be accomplished gradually over a period of years. But make no mistake: The race to develop advanced driver-assistance systems is on. Major vehicle original equipment manufacturers and Tier-1 suppliers are accelerating development efforts to get ahead in the race and gain a share of a market estimated to be US$30.0 billion in 2019 and projected to reach US$134.9 billion by 2027, representing a CAGR of 20.7% (Fig. 4). 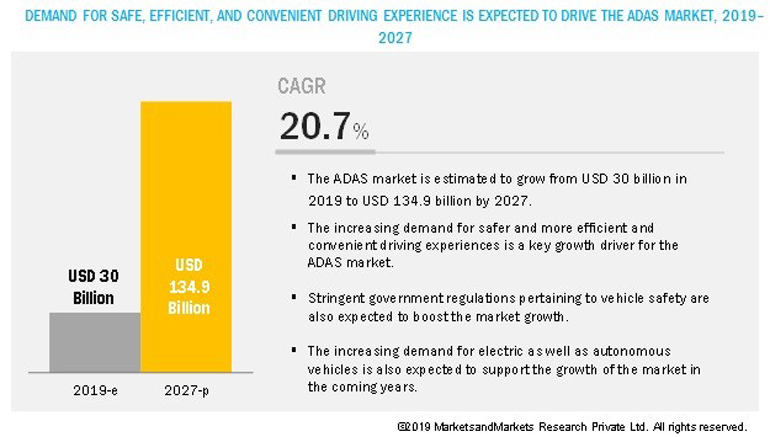 4. ADAS systems are expected to chalk up solid growth in tandem with strong demand for a safer, more efficient, and convenient driving experience. (Source: MarketsandMarkets)

For more information about Jacinto 7 processors, go to www.ti.com/Jacinto7-pr.