Can cow manure really help green the world’s electricity grids? Surprisingly, biogas produced from animal manure and other types of organic waste is already being used to generate substantial amounts of electricity and process heat along with other types of energy in Europe, India, and other parts of the world (Fig. 1).

Equally important, biogas-powered generating plants with outputs ranging from a few hundred kilowatts to multiple megawatts are taking their place alongside the growing number of other industrial-scale plants, powered by wind and solar, which are helping utility grids make the transition from our century-old centralized distribution networks to more efficient, responsive, and resilient distributed architectures.

Regardless of whether they make power from the sun’s distant rays or a nearby city’s sewage sludge, the growing role of industrial-scale renewables in the global energy mix has created a very real demand for a new generation of reliable, efficient, and cost-effective equipment designed specifically for distributed generation applications. This new demand represents significant new market opportunities for manufacturers of power conversion, storage, and management systems—as well as new challenges for the designers tasked with creating them.

This two-part story is intended serve as a brief introduction to some of the issues involved with designing renewable-based distributed energy systems. In this part, we’ll take a look at biogas technology, its current role in distributed generation, and some of the recent advances that allow it to play an important—and highly profitable role—in the transition toward a greener economy.

The second installment will focus on the challenges involved with designing the energy conversion, storage, and transmission equipment used in industrial-scale distributed generating plants, and the role that wide-bandgap semiconductors will play in meeting them. It will include insights from expert representatives from several leading electronics manufacturers.

Produced from animal or crop waste, sewage, or nearly any type of organic waste, biogas has the potential to meet 19% of global electricity demand by 2050, while eliminating 10% to 13% of humanity’s current greenhouse emissions (equivalent to 4360 metric tons of CO2).1

At the present time, Europe is the leader in biogas energy production, accounting for almost 45% of the total biogas produced across the world. And while biogas-generated electricity only represents about 6% of Europe’s green-energy portfolio, it’s expected to enjoy a 4.5% CAGR for most of the next decade. Translated into hard numbers, a study conducted in 2018 found that Europe had 17,783 plants with total capacity of around 11 GW, which generated roughly 55 TWh of electricity that year (Fig. 2).2

According to Bioenergy Europe projections, bioelectricity will grow by 30% in the coming decade reaching 17.4 Mtoe in 2030 in the EU27. Its development will facilitate driving down GHG emissions and fulfilling EU’s 2030 targets.

North America, Asia, and Latin America also have substantial bio-energy efforts underway, expanding  their installed bases at 2%-4% per year. According to a report issued by the U.S. Energy Information Administration (EIA)3, during 2018, roughly 270 billion cubic feet (Bcf) of landfill gas was collected from about 352 U.S. landfills and burned to produce about 11 Billion kWh of electricity. This represents roughly 0.3% of total U.S. utility-scale electricity generation for that year.

Differences, Similarities, and a Promising Future

A biogas-powered distributed generation facility has several unique elements, such as the treatment system that removes the water vapor, sulfur, and other contaminants from the raw gas to make it suitable as fuel. The system also has a heat exchanger system, more commonly associated with fossil-fuel-burning heat and power (CHP) plants, to extract the waste heat from the engine for heating buildings or many types of industrial processes.

In addition, such a system produces a double environmental benefit. Not only does it avert the production of 2,683 tons of CO2 each year, but it also produces and burns methane in a controlled environment from materials that would have otherwise released it into the atmosphere when they decomposed in a field or landfill.

Beyond these differences, most of the electrical systems in the facility would be familiar to anyone operating one of the industrial-scale wind or solar generating facilities that are playing an increasingly important role in the world’s energy economy. Likewise, the growing demand for equipment that performs the conversion, management, storage, and distribution of the energy produced by these facilities represents a significant opportunity for manufacturers who are prepared to grasp it.

Biogas power’s growing role in the global energy mix for over the last two decades can provide some useful insights about what’s driving the design requirements for all types of distributed energy equipment. Many of these issues are reflected the recent technical upgrades to an agricultural biogas plant, located in Germany’s Lower Saxony region (Fig. 3). 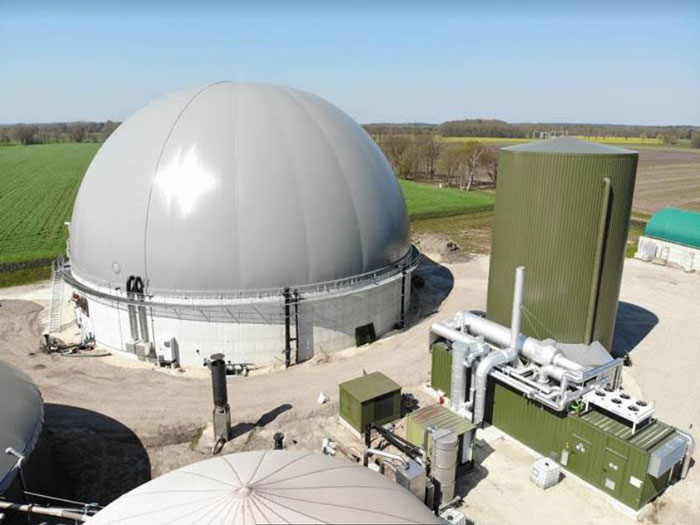 Originally commissioned in 2001 by Andreas Rohlfs to provide power for his 235-hectare farm, the combined CHP digester produces biogas fuel from the farm’s waste stream, a mix of dung, liquid manure, maize stalks, and other plant matter. Any electricity not consumed by the farm is fed into the grid, while the waste heat produced by the digestion process is fed into a district heating network where it’s used to heat private and municipal buildings and for drying wood chips. The original produced around 5.4 million kilowatt hours (5.4 GWh) of electrical energy and 4.1 GWh of thermal energy per year.

A 1.6 million Euro upgrade, begun in 2019 by ETW Energietechnik, transformed the straightforward biogas generating facility into a regenerative storage power plant. Improvements included replacing the old combined CHP system with a so-called “Flex” system. This includes a biogas-optimized CHP engine (MWM model # TCG 2020 V20) with a rated electrical output of 2 MW and 2.3 MW of thermal energy (Fig. 4). After the upgrades, the plant produces 5.7 GWh of electrical energy and almost 5.8 GWh of heat per year. 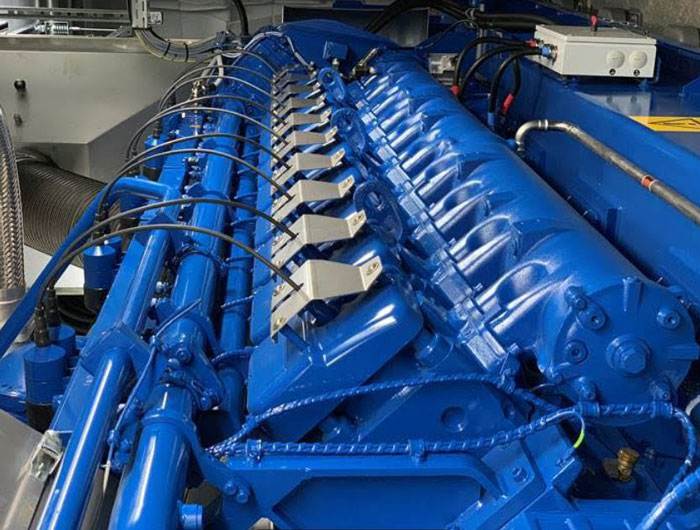 4. The farm’s generator is driven by a conventional stationary CHP motor, optimized to run on biogas. (Credit: ETW Energietechnik)

Together, the increased gas and fuel storage ensure that there’s a large reserve of electricity and heat available when demand is greatest. The thermal storage system includes a “keep-over” function that diverts a small portion of the digester’s heat output to the generator’s engine when it’s not running. This allows the plant operator to quickly restart the engine and make the CHP’s full output available to support a jump in demand, either on the farm or the regional grid.

In addition to the economic benefits, the regenerative storage upgrade allows the CHP facility’s electric generator to eliminate roughly 2,683 tons of CO2 per year and an additional 1,300 tons with its heat production.

Regardless of whether they make power from the sun’s distant rays or a nearby city’s sewage sludge, industrial-scale distributed generating plants share many of the same technical requirements for regulating, conditioning, and distributing their output through the power grid. They also face the same challenges that renewable and conventional plants are confronting as they implement storage capabilities to hold over surplus power for later use.

In the next installment, we’ll take a closer look at that equipment, and the technologies that will make the next generation of distributed generation systems even more efficient, robust, and cost-effective.

The American Biogas Council offers a library of whitepapers on various aspects of biogas production, commercialization, and regulation, as well as several valuable guides to vendors and a clearing house for completed biogas-related research projects. Visit https://americanbiogascouncil.org/resources/.