When we look at today’s focus of our safety efforts, we see that we mostly deal with the following topics:

Safety in use (SiU) tries to cover hazards arising from the interaction of the safety-related system with a human operator. Security is a topic which has significant impact on safety, for example, when a safety-related system isn’t secure against unauthorized access from a third party, who then might be able to manipulate the system. Active and passive safety systems also try to prevent accidents or activate during a collision to protect the driver and passenger, respectively.

Looking at this list, the question arises sooner or later on whether we’re missing something in our combined safety efforts. Something that poses a risk to humans but currently isn’t covered by the safety efforts that we invest.

As an example, let’s look at the Tesla autopilot system (version 2.5) and a scenario where this system behaved unsafely. In normal conditions, the autopilot can detect both lane markings of the ego lane and steers the vehicle accordingly to stay at the center of the lane. However, at some point, the system may lose one or both lane markings and is obliged to react accordingly. This can be due to, for example, missing or intermittent lane markings on the road, or the system incorrectly interpreting the given lanes.

In the case of only one detected lane marking, the system is designed to keep working with the remaining lane marking as the only reference for steering the car. Problems may arise when this lane marking leads the ego vehicle into entering a forbidden area, where the vehicle would crash into a barrier ahead:

The takeaway from this scenario is the fact that all technical components performed exactly as designed and tested. There was no component failure. No system was hacked from the inside or the outside that led to a component failure and/or misbehaving components. It wasn’t a problem of SiU since the driver is required to give the control to the autopilot system. Systems of active and passive safety (e.g., seat belts, ABS, ESP, etc.) can’t deal with this kind of issues as well. Regarding SOTIF, even with enough sensor performance for lane marking detection, the problem of incorrect interpretation of sensor data and a resulting false system belief of its environment is normally not part of SOTIF analyses.

There’s a gap in our safety efforts, focusing on the belief of the system about its environment rather than the failure of components. New problems often require a new analysis method to cover these topics, like the System-Theoretic Process Analysis (STPA).

For both cases, the safety community already has very powerful analysis methods at their disposal, e.g. FMEA, FTA, HAZOP, etc. It’s shown that due to our increased skills in performing classic safety analyses such as FMEA and FTA, losses resulting from component failures have decreased significantly over the last decades (Fig. 2). 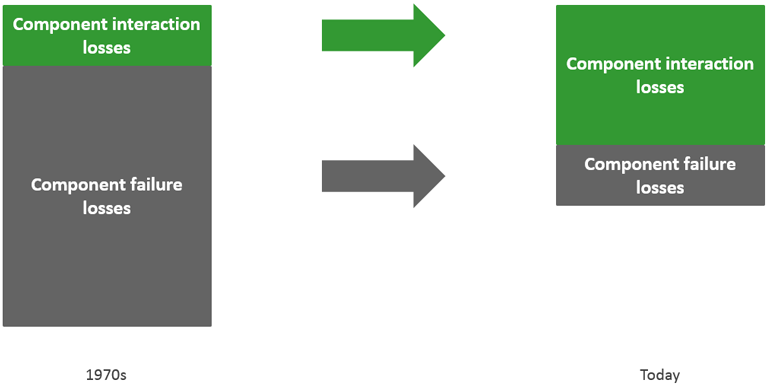 Losses due to component interaction, though, have increased at the same time. In case of unsafe scenarios that aren’t a result of component failures but of losses, the former mentioned safety analysis methods are no longer sufficient. This is where the method of STPA can complete the toolbox of safety analyses. STPA isn’t meant to replace one or more of the already established methods, but to extend the possibilities of analysis methods to also cover hazards that arise from a non-component failure.

The traditional hazard analysis is based on decomposition. A complex system is broken down into its single components, which in turn and isolation are analyzed for failures. The results are then combined in order to understand the behavior of the composed components. This approach requires that the components are independent of each other.

If this assumption isn’t met, then the decomposition of a system into components and their individual analysis will not reflect the final system behavior. This approach, however, proved very useful for the types of systems that were built a few years ago, and it’s still valid for certain properties of our systems today.

A new method is needed that closes those gaps. We need to start looking at the system as a whole and not focus on the separate parts/components. System theory does exactly that.

In 2012, Nancy G. Leveson introduced the System-Theoretic Accident Model and Processes (STAMP)1, which is based on system theory as well as control theory. STAMP provides the theoretical foundation to STPA. In STAMP, “safety is treated as a dynamic control problem rather than a failure prevention problem2.” However, STAMP isn’t an analysis method. It’s a “model or set of assumptions about how accidents occur2.”

STPA is an analysis method based on STAMP. It uses the system-theoretic approach to analyze potential causes of accidents during development so that hazards can be eliminated or controlled.

Overview of the Method

3. This is an overview of the STPA method.

Step 1: Definition of the purpose of the analysis

This first step is to identify the system that’s supposed to be analyzed. For this purpose, it’s important to define system boundaries to explicitly state where the system responsibilities end—what is, per definition, the system and what belongs to the environment.

It’s also important to define which kind of losses the analysis shall prevent. Is the focus on traditional safety goals like loss of human life and/or injury of humans, or also, for example, are economic factors a concern?

After the system boundaries are defined, the losses are identified. The definition of a loss reads as follows: “A loss involves something of value to stakeholders. Losses may include a loss of human life or human injury, property damage, environmental pollution, loss of mission, loss of reputation, loss or leak of sensitive information, or any other loss that is unacceptable to the stakeholders2.” As the definition states, in the beginning of the analysis, the stakeholders must define which losses they want the analysis to focus on.

Examples of losses for an adaptive-cruise-control (ACC) system include:

For the identification of losses, it’s important to note that losses should not reference individual components or specific causes.

Once the stakeholder losses are defined, system-level hazards are identified. The definition of a system-level hazard reads as follows: “A hazard is a system state or set of conditions that, together with a particular set of worst-case environmental conditions, will lead to a loss2.”

When defining hazards, it’s crucial that hazards not be confused with causes of hazards. Therefore, it’s again important that hazards don’t refer to individual components of the system. The format of describing a hazard should be:

Examples for hazards for an ACC system include:

Note the traces to the losses in the brackets behind the hazards.

System-level safety constraints can be derived by simply inverting the condition of the system-level hazard:

What we will look at in steps 2 to 4 is a systematic identification of scenarios that can violate these system-level safety constraints.

Step 2: Modeling of the control structure 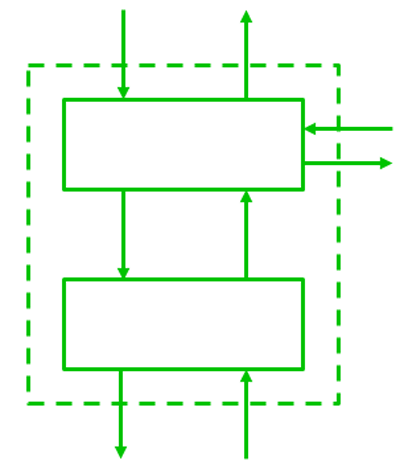 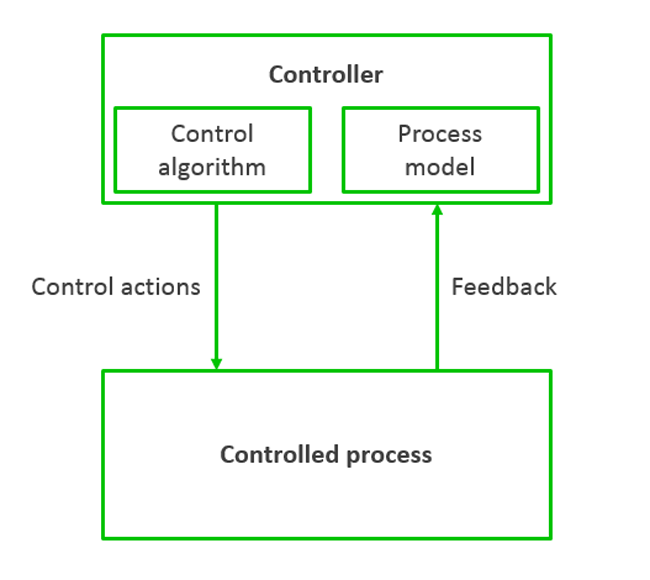 Problems can arise anywhere in the control loop. The belief of the system in the process model could be wrong. Control actions performed by the control algorithm might be unsafe in a specific situation. Feedback could be missing or incorrect.

6. The basic control structure of an ACC in this example consists of five control loops.

It’s important to note that as a possible point of confusion, a control structure isn’t a physical model—it’s a functional model. This way it’s possible to also display interactions that aren’t physical in nature; for example, the communication between a flight crew and an air traffic controller.

Step 3 identifies the unsafe control actions. Every control action that was identified in the control structure in Figure 6 is analyzed to determine whether this control action can be unsafe in a certain scenario. For this analysis, a guide-word-driven approach is used, such as in a HAZOP analysis. For an exemplary analysis, we look at the brake command executed from the ACC system on the ego vehicle (Fig. 7).

7. This model shows the brake command executed from the ACC system on the ego vehicle.

The guide words often used for the analysis are:

9. Controller restraints regarding the brake control action are listed in this table.

The last step of the STPA focuses on the identification of loss scenarios. Here, the whole control loop is analyzed for causal factors (Fig. 10).

10. Loss scenarios are identified in this model.

Two types of loss scenarios need to be considered:

Why would unsafe control actions occur?

Why would control actions be improperly executed or not executed?

Hazards can also arise without having UCAs, but with having correct control actions not executed or improperly executed. Possibilities for this to happen include:

Scenarios related to the controlled process:

If we now apply the introduced steps to our initial Tesla autopilot system (version 2.5) example, how could this have helped us to identify the problem? Figure 11 shows the steps of the STPA that could have led to the identification of the system behavior of entering an area outside the operational design domain.

11. This model shows the STPA on the Tesla Autopilot System.

We see that by applying the STPA on a system level, even without further technical knowledge of the system, potentially hazardous scenarios can already be identified and requirements for their mitigation or even elimination can be derived.