What is a Step-Down Transformer?

Transformers are static electrical devices with no moving parts, transforming electrical power from one voltage and current setting to another. The frequency of the electrical current remains constant.

Generally, step-up transformers are located at power generation plants, stepping up the voltage flowing from the power plant to long-distance distribution networks. Step-down transformers, on the other hand, decrease the voltage of power streams received at the local distribution level. The long-distance stream is first stepped down to a level acceptable for local distribution, and then stepped down again at each consumer node (residential homes and offices).

The Necessity of Transformers

When transmitting power over both long and short distances, there are inherent losses in the system. These losses are of greater magnitude when the current is higher (at lower voltage) than at a low current. For this reason, long-distance transmission necessitates that electricity has high voltage and low current. High voltages aren’t safe for consumers, though, and aren’t suitable for most electrical appliances. Consumer appliances are generally rated at 220 V.

As an aside, power transmission lines are generally manufactured from copper to minimize the losses associated with transmission. Copper offers the lowest electrical resistance of all conductive materials.

Household voltage is 220 V in most areas. However, household outlets operate at 110 or 120 V in the United States and neighboring countries. Connecting a 220-V device to a 110-V outlet may damage the device. Fortunately, inexpensive adapters (Fig. 1) are readily accessible to fully solve the problem. They’re sold for less than $20 in most electronics shops. Many of these European-made devices specifically state that they can be used in the United States.

1. This is a photo of a typical step-up transformer adapter converter that operates from 110 to 220 V.

Transformers work on the principle of mutual induction. A changing magnetic field in one loop of wire induces an electromotive force (EMF) in an adjacent loop of wire, inductively coupled to the first. In very basic terms, a transformer consists of two coils of wire with high mutual inductance. These coils are electrically separated while they share a common magnetic circuit (Fig. 2). 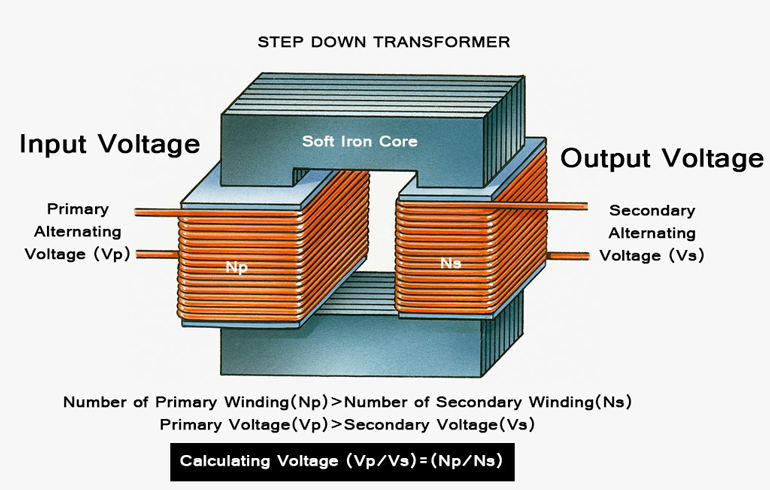 2. A step-down transformer has more primary windings than the secondary side.

For a step-down transformer, the second coil has fewer windings than the first, allowing for a decrease in voltage in the exiting electrical stream.

The primary winding, which is the first set of coils, connects to an alternating-current voltage source, or primary voltage inflow. The secondary coil connects to the load, or secondary voltage outflow, distributing the electrical power away from the transformer.

Transformers are an expensive but essential aspect of the electricity supply chain. A large amount of capital expenditure is needed to acquire transformers, and it’s expected that they last for the entire forecast lifespan. In reality, though, these transformers usually fail about halfway through their expected lifespan. Windings, tap changers, and bushings in ill repair are often the primary cause.

However, inadequate maintenance plans aren’t solely to blame. Transformers are often mismatched to their intended usage conditions, placing unnecessary strain on the device once in use. Even though transformers are entirely static, with no moving parts, the intensity of the current flowing through the wire coils causes wear on the coils themselves. The same is true for the tap changers and bushings. Over time, the integrity of these materials is compromised, failing either mildly or catastrophically.

To prevent this premature failure, transformers must be specified with care. Once installed, commissioning should be done with care, too. Operating conditions must be meticulously controlled, and maintenance plans carried out regularly and thoroughly. With these provisions in place, transformers are likely to provide optimum performance for the entirety of their forecast lifespan.

Choose the type of metal used in the transformer’s windings with care. The aim here is to minimize resistance in the wires while maximizing electrical conduction. Copper is generally the best choice in this case, although it’s generally more expensive than aluminum, which is the alternative.

It’s important to understand the physical arrangement of the coils. This arrangement should match the expected operating conditions.

Insulation is critical to the proper functioning of a transformer as well as the safety of personnel on-site. Match this to the expected operating conditions, ensuring the optimal selection of the insulating material and configuration.

Transformers are essential to the effective functioning of the national power grid. These devices allow electrical power to be converted to the correct voltage to current ratios for both long-distance transmission and local distribution. Due to their cost, transformer should be chosen with care. Correct operation and adequate maintenance prolong the transformer unit’s expected lifespan.