For example, QuantumScape, which has a strategic partnership with Volkswagen, announced promising test results for a solid-state cell. At the same time a six-year-old startup called Solid Power revealed that it has made a functioning solid-state cell and is producing prototype batteries with 10 stacked layers at a pilot plant in Colorado.

Furthermore, Toray Industries has created a non-porous separator for lithium-ion batteries that could vastly increase battery capacity by enhancing the safety of lithium-metal anodes, and Toyota said that it plans to have solid-state battery technology in its production vehicles by 2025.

Let‘s look at these developments one at a time.

In a press announcement, QuantumScape, a 10-year-old San Jose, California startup, provided technical results from lab tests of the company’s solid-state battery. Previously, solid-state batteries working with lithium metal at high rates of power suffered from short lifetimes and slow charging rate. But according to QuantumScape, its noncombustible cell can charge to 80% of capacity in 15 minutes, retain more than 80% of its capacity after 800 charging cycles, and has a volumetric energy density of more than 1,000 watt-hours per liter, nearly double the energy density of commercial lithium-ion cells.

QuantumScape’s cathode, or positive terminal, consists of nickel manganese cobalt oxide, which is common in EV batteries. However, its negative electrode, or anode, is made from pure lithium metal that’s formed in situ when the finished cell is charged, rather than when the cell is produced (Fig. 1).

The key breakthrough is the use of a ceramic separator between the cathode and the anode to replace the liquid electrolyte used in conventional battery cells. Like the liquid electrolyte in this scheme, lithium ions flow from one terminal to the other when the battery charges and discharges. During discharge, the lithium flows from the anode to the cathode and the anode side is compressed. As thin as a human hair, the separator is the “secret sauce” of a solid-state battery. It must act as a barrier that keeps lithium dendrites—metallic tendrils that form on lithium-metal anodes during charge cycles—from going between the electrodes and causing a short circuit.

Dendrites are caused by a phenomenon in which branch-shaped crystals grow on the surface of the negative electrode due to an uneven chemical reaction. Lithium dendrites form along the pores of microporous film. Eliminating separator pores can stop such growth, but the downside is greatly reduced lithium-ion permeability. QuantumScape’s solid-state separator replaces the organic separator used in conventional cells, enabling an anode-less architecture, with zero excess lithium.

In the past, solid-state battery efforts have relied on either a polymer—the separator material of choice in liquid electrolyte batteries—or a hard ceramic. Polymers unfortunately don’t block dendrites. And ceramics used for experimental solid-state batteries have proven to be too brittle to last for enough charging cycles. QuantumScape has not revealed the nature of the separator it uses other than to say the material is readily available.

QuantumScape’s newly released results, based on testing of single-layer battery cells, show its solid-state separators are capable of working at very high rates of power, enabling a 15-minute charge to 80% capacity, faster than conventional batteries are capable of delivering.

The tested cells were large-area, single-layer pouch cells in the target commercial form factor with thick cathodes running at rates of one-hour charge and discharge at 30°C. These tests demonstrated retained capacity of greater than 80% after 800 cycles.

The thin cell unveiled by QuantumScape is destined to be stacked together with about 100 others to form a full cell about the size of a deck of cards. So far, the company hasn’t tested a fully stacked cell.

A six-year-old startup called Solid Power has also made a functioning solid-state cell. The flammable liquid electrolyte in a conventional lithium-ion battery is replaced with a proprietary sulfide solid electrolyte. Solid Power has begun producing 330-Wh/kg, 22-layer all-solid-state lithium-metal batteries on the company’s continuous roll-to-roll production line at a pilot plant in Louisville, Colorado (Fig. 2). The company has a roadmap to surpass 400 Wh/kg by 2022. 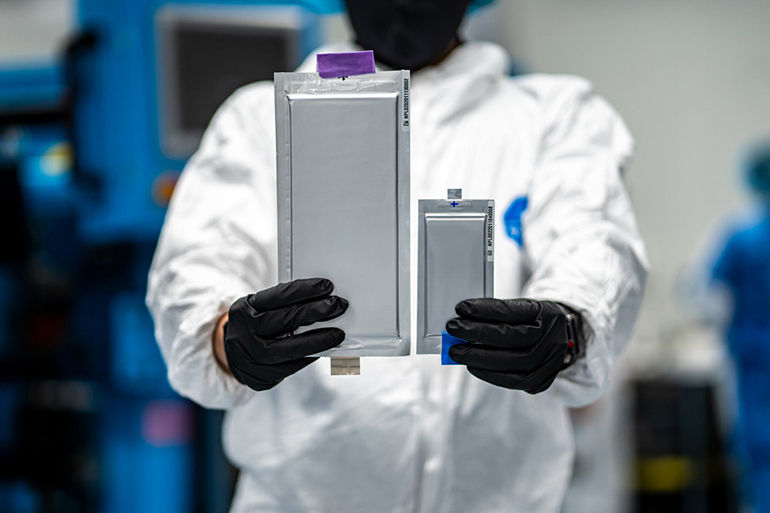 Solid Power has partnerships with a number of auto manufacturers, including BMW Hyundai and Ford, to jointly develop all-solid-state batteries. The company also is backed by prominent investors including Samsung, Volta Energy Technologies, and Solvay.

Solid Power has demonstrated the company’s latest electrode compositions, which will move to the production line in 2021, including:

Toray Industries has created a non-porous separator for lithium-ion batteries that could vastly increase capacity by enhancing the safety of lithium-metal anode batteries. Toray tackled the challenge of lithium dendrites forming on lithium-metal surfaces during charging—penetrating separators and causing short circuits that deteriorate safety—by utilizing high-heat-resistance aramid polymer molecular design technology.  The company thus was able to suppress dendrite formation in lithium-metal anode batteries while keeping ion conductivity. It did so by employing the polymer as a non-porous separator comprising a pore-free layer onto a microporous separator.

Toray showed that a battery with such a separator suppressed short circuits attributable to dendrites and maintained more than 80% of its capacity after 100 charge/discharge cycles. The company further said it will accelerate research and development to swiftly establish technologies with lithium-metal anodes batteries so that it can drive ultra-high capacity and safety for tomorrow’s lithium-ion batteries.

Toyota is developing a solid-state cell that company officials say would be capable of making a trip of 500 km on one charge and recharge from zero to full in 10 minutes. And the cell would do so with minimal safety concerns. Toyota planned to unveil its solid-state battery at the Tokyo Olympics this year before it was postponed due to the pandemic

Toyota further plans to be the first company to sell an electric vehicle equipped with a solid-state battery in the early 2020s. The world’s largest automaker is expected to unveil a prototype next year.