A new medical device makes it easy to decide whether you need your daily dose of Vitamin C.

The non-invasive, wearable sensor, developed by a research team at University of California San Diego, provides a way to track a user’s daily nutritional intake and dietary adherence.

Wearable sensors are typically associated with tracking physical activity or for monitoring disease pathologies, such as diabetes. But the vitamin C sensor device is the first to track changes using an enzyme-based approach, noted Juliane Sempionatto, a Ph.D. candidate in nanoengineering at the UC San Diego Jacobs School of Engineering and first-author of the study “Epidermal Enzymatic Biosensors for Sweat Vitamin C: Toward Personalized Nutrition,” published in ACS Sensors.

“Wearable sensors have rarely been considered for precision nutrition,” said Joseph Wang, a professor of nanoengineering and director of the Center of Wearable Sensors at UC San Diego.

The sensor is paired with a circuit board that can transmit data wirelessly.University of California San Diego

The sensor consists of a flexible, polyurethane tattoo patch fitted with a sweat stimulation system, as well as an electrode sensor containing the enzyme ascorbate oxidase. When vitamin C is present, noted the study, the enzyme converts to dehydroascorbic acid. The resulting consumption of oxygen generates a current, which is measured by the device.

The device was tested in vitro as well as in four human subjects who consumed vitamin C supplements and fruit juices. According to the authors, the device detected changes in the levels of vitamin C over two hours.

In addition, the electrode detector was tested for cross-functionality. This was achieved by gauging its ability to detect temporal vitamin C changes in tears and saliva. The researchers report that differences observed in the vitamin C dynamics across different human subjects is an indication that the device holds promise for personal nutrition applications.

“Ultimately, this sort of device would be valuable for supporting behavioral changes around diet and nutrition,” said Sempionatto. “A user could track not just vitamin C, but other nutrients—a multivitamin patch, if you will. This is a field that will keep growing fast.”

The UC San Diego team is collaborating with global nutrition company DSM toward the use of wearable sensors for personal nutrition. 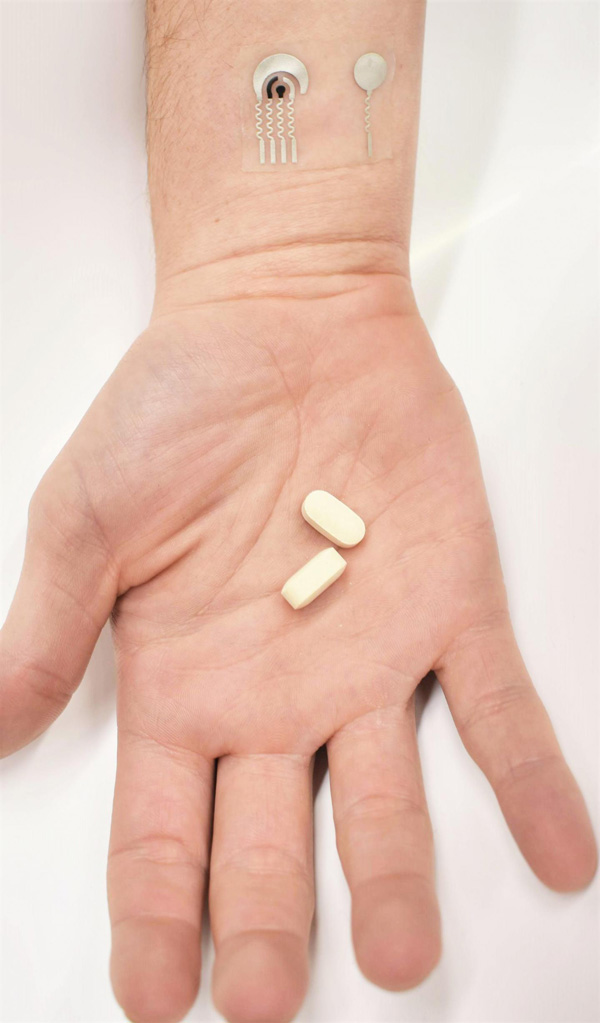 The body needs vitamin C to form blood vessels, cartilage, muscle and collagen in bones. According to the Mayo Clinic, vitamin C is an antioxidant that might help protect cells against the effects of free radicals. (Free radicals are compounds formed when the body converts food into energy.)

“I hope that the new epidermal patch will facilitate the use of wearable sensors for non-invasive nutrition status assessments and tracking of nutrient uptake toward detecting and correcting nutritional deficiencies, assessing adherence to vitamin intake and supporting dietary behavior change,” said Joseph Wang, a professor of nanoengineering and director of the Center of Wearable Sensors at UC San Diego.

Vitamin C is also being studied in several clinical trials for its potential in supporting recovery from COVID-19, the disease caused by the novel SARS-CoV-2 virus. In a Canadian clinical trial run by physicians in Montreal and Toronto, researchers are investigating the use of intravenous vitamin C in COVID-19 patients. In a separate meta-analysis, the use and effect of vitamin C was evaluated in relation to the length of stay in the intensive care unit and duration of mechanical ventilation. Results are not definitive, but a recent study found that hospital stays could be shortened with the use of vitamin C.

With the race to find treatments for COVID-19, the researchers are also poised to get the vitamin C sensor technology into a clinical setting, in the event that vitamin C does prove to be a helpful treatment for the disease.