For most design engineers, study of waveguide technology ended when they got their last degree. The only time waveguide comes up is to use it as a last resort in applications such as millimeter-wave (mmWave) measurements, where coaxial cable is too lossy, expensive, and fragile. That’s not to say waveguide isn’t used anymore, but it’s not considered “modern” technology and of little use in applications such as wireless. However, that perception is beginning to change, and the needs for waveguide’s benefits at mmWave frequencies for 5G are driving substantial amounts of research around the world.

The market for waveguide, and the components made from it, is remarkably stable and continues to grow. Depending on analysts, this growth is expected to be from 5% to 20% through the early 2020s. In its “Millimeter Wave Technology Market 2019-2023,” 360 Research Reports notes: “There has been a remarkable increase in antenna developments from waveguide slot antennas,” driven by mmWave radars and interest in “design and implementation of efficient and miniaturized antennas for mobile communications and radio communication equipment.”

That’s remarkable in an era when systems of all kinds are shrinking and powered by low-power solid-state devices, and except for those who actively seek it, information about waveguide antennas is rarely covered in the media. However, many research papers concerning new waveguide antenna designs appear every year. Many of them are related not to traditional applications such as defense systems, but rather to their potential use in deploying commercial wireless networks.

The reason for this interest lies in the basic characteristics of waveguide, which when compared with its counterpart, coaxial transmission line, has unique benefits. For example, while coaxial cable is far easier to use, its performance declines with frequency. And at millimeter wavelengths above about 30 Hz, insertion loss becomes increasingly problematic and its size shrinks to the size of a pencil lead, making it extremely fragile and expensive.

Only air has lower insertion loss than waveguide, and it’s virtually impervious to external interference, handles much higher levels of RF power, and operates over wide bandwidths. The RF power-handling ability of coaxial cables is quite high at high frequencies, especially when using air rather than PTFE as the dielectric, but it falls off rapidly with frequency to a watt or less at high millimeter wavelengths

That said, at lower frequencies, metal waveguide is huge when compared to coaxial cable, and for applications at 1 GHz and below it’s truly enormous, fulfilling its derogative moniker as “microwave plumbing.” Even the flexible versions of waveguide are comparatively difficult to install and require special couplings.

Because of its size, most waveguide applications today are confined to test and measurement, radar and electronic warfare systems, point-to-point links, satellite terminals, broadcast transmitters, medical systems, and linear accelerators and other scientific systems. But at frequencies above about 30 GHz, waveguide comes into its own, and as frequency increases, it becomes the only reasonable solution for transferring energy over a physical medium with low loss. In the future, it holds great potential for mmWave antennas, too.

One of the core tenets of the fifth generation of wireless communications is the use of mmWave frequencies. They’re needed to accommodate the extremely wide channel bandwidths required by high-definition video streaming and other data-intensive applications, as well as the low latency required by applications such autonomous vehicles, tele-surgery, gaming, and many industrial applications. To realize operation in this spectral region, advanced antenna architectures will be crucial. Although waveguide-based antennas are rarely mentioned in the same sentence as 5G, they will likely play an important role at millimeter wavelengths.

To facilitate the development of mmWave technology around 60 GHz for Wi-Fi and potentially the next generation of cellular technology, Pasternack in 2014 introduced the PEM003-KIT transmit/receive development system for creating transmission paths at varying distances and vary key parameters to verify and optimize the performance of designs. At the time it was introduced, 60 GHz seemed a bit far out in terms of deployment. However, in the last two years, the kit has gained popularity as designers and experimenters realize that 60 GHz will likely be in their sights sooner rather than later.

The PEM033-KIT consists of transmitter and receiver printed circuit boards and WR15/WG2 waveguide antenna modules that create transmission and reception paths, along with Windows software that acts as a control panel for system monitoring, configuration, and experimentation (Fig. 1). Two antenna modules are available: For distances between 30 to 50 m, a WR-15 antenna delivers gain of 15 dBi, and for distances between 200 to 300 m, a WR15 horn antenna delivers 34 dBi of gain.

A variety of waveguide antenna techniques can be used to achieve excellent results by combining the inherent characteristics of waveguide and fabrication using cost-effective methods. Depending on their architecture, these antennas can provide directional or omnidirectional coverage and electronically steered beams. Active beamsteering, regardless of the technology used to implement it, is essential for combating the challenging propagation characteristics at millimeter wavelengths.

The majority of the traditional waveguide antennas are standard rectangular, or conical, gain horns, with directional radiation patterns. For wireless communication applications, like 5G, other radiation patterns may be required for desired coverage, such as omnidirectional and sector patterns. In addition, dual polarization and circular polarization may be needed for optimized communications. Pasternack has introduced these categories of waveguide antennas, as well as high-gain lens gain horns.

One such antenna is the slotted waveguide antenna array (SWAA), which has been used since World War II in various radar applications, especially rotating commercial S-band (2 to 4 GHz) marine radars where cost and simplicity are key metrics. SWAAs consist of lengths of circular or rectangular waveguide with slots milled into their conducting walls. These slots introduce discontinuities in the conductor and interrupt the current flow in the waveguide wall. As current flows around the edges of the slots, they act as dipole antennas. The waveguide itself acts as the transmission line feeding the antenna elements.

Researchers at the National Institute of Telecommunications and the Federal University of Itajubá in Brazil developed SWAAs that have the potential for use in 5G networks.1 One of these, designed for operation between 24 and 33 GHz, combines high gain and omnidirectional coverage using circular waveguide filled with PTFE that acts as a mechanical support for the antenna structure (Fig. 2).

2. The omnidirectional ring-based SWAA antenna from researchers in Brazil is designed to deliver coverage indoors or outdoors with substantial gain.

The circular slots in the waveguide are equally spaced. They act as metal rings within a dielectric rod in which the waves function much like a leaky-wave antenna. RF energy is radiated outward through the slots, producing omnidirectional coverage. The conical horn of the lower part of the antenna measures 15 × 9.9 mm and is fed by a K connector. The antenna produces gain of about 12 dBi at 28 GHz and has a 2.15-GHz bandwidth. It stated applications include shopping malls, theaters, convention centers, and stadiums.

One of the most impressive large-scale SWAA antennas was announced early last year by Mitsubishi Electric and Hiroshima Institute of Technology (Fig. 3). The 2,000-element dual-polarized array is designed for weather, airport radar, remote-sensing radar, and satellite communications, but the concept could be applied to smaller arrays at higher frequencies. Because it’s made from injection-molded resin rather than metal, it’s 40% lighter and 90% less expensive than a patch array of the same size. Furthermore, it offers 60% sidelobe suppression, a 90% reduction in cross-polarization, and 10% greater efficiency. 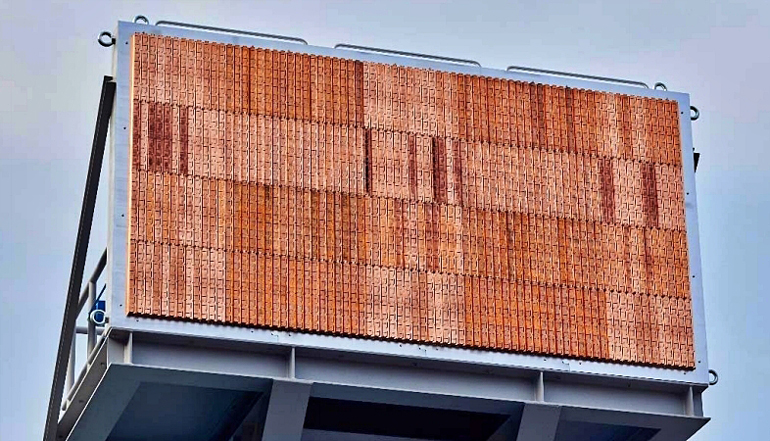 3. This 2,000-element SWAA from Mitsubishi Electric and Hiroshima Institute of Technology is designed for use in weather and surveillance radars.

Another promising technology is substrate integrated waveguide (SIW), which uses printed structures that emulate metal waveguide but are lightweight, have a low profile and low insertion loss, and are easy to manufacture. SIW technology allows for integration of passive and active components and antennas in a single substrate. It’s a promising technology not only for antennas, but for phase shifters, oscillators, resonators, filters, and other passive components, forming substrate integrated circuits (SiCs). They can be directly connected to planar circuits, namely microstrip line and coplanar waveguide, making it suitable for mass production.

SIW falls between microchip line and dielectric-filled waveguide in which the metal on both sides of a dielectric substrate (microwave laminate) acts as the waveguide’s top and bottom walls. A dense array of metallized posts connects to the upper and lower plates of the substrate. There are multiple variations on SIW that enhance its capabilities while reducing size and complexity.

For example, half-mode SIW reduces the amount of vertical metallization to half that of a full SIW implementation, increases operating bandwidth, and can function effectively up to about 100 GHz. The latest versions of this technique eliminate the via holes and the dielectric substrate, replacing it with an air-filled structure while maintaining the advantage of integration on a planar substrate.2 As a result, the technique may allow SIW to be at even higher frequencies.

Other researchers have developed a double‐sided, 4×4 element SIW slot antenna using a stripline feed.3 The antenna and its feed are fabricated on a single substrate with two dielectric layers and three copper layers, resulting in its small size, low profile, low cost, and two radiation directions. The antenna can be used at 25 and 28 GHz with 8-dBi gain, 63-deg. half-power beamwidth, and a 2-GHz bandwidth.

Still another technique is half-mode composite waveguide (MCW). It consists of inner and outer waveguide structures in which the outer structure acts as a rectangular coaxial line for lower-frequency operation while the inner structure acts as a rectangular waveguide for higher-frequency operation. A half-mode version (HMCW) has inner and outer waveguide that operates in half-mode. When compared to its full-size counterpart, it occupies half the space with comparable insertion loss.

Finally, Gapwaves, a Swedish company founded by the late Per-Simon Kildal, a researcher and professor at Chalmers University of Technology, developed a commercial product based on techniques quite different from others called a gap waveguide. A structured metal surface and flat metal surface are placed close together, with the structured surface having pins that form a metamaterial surface referred to as an artificial magnetic conductor (Fig. 4). 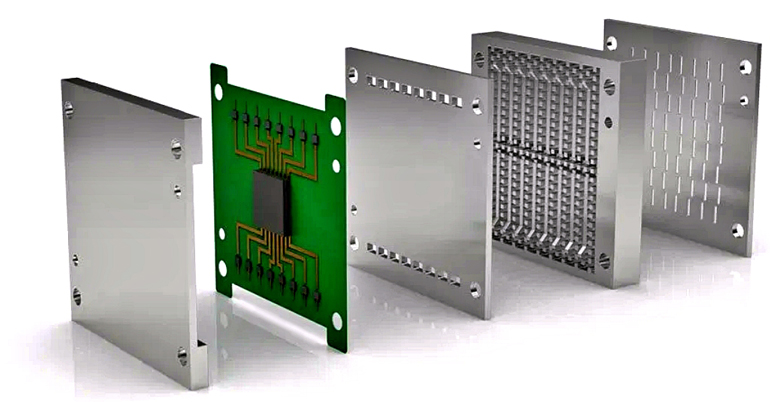 4. The Gapwaves “gap waveguide” technology can be used to build a compact 28-GHz phased array while integrating active components to produce a complete subsystem.

The pins prevent RF energy from propagating in undesired directions. Thus, the pins effectively replace the walls in a conventional rectangular waveguide—without the need for a sealed metallic enclosure. The waves propagate in the air gap between the ridges and the top metal surface with low loss, and no metallic contact is required between the two parts, so assembly is comparatively simple.

A 28-GHz phased-array using this technology can deliver effective radiated power of 65 dBm in a small form factor. It also allows for integration and direct antenna contact with other active or passive components by replacing the flat metal surface with a circuit board. The company is integrating GaN front-end modules, filters, a beamforming chip set, and other components to produce a complete subsystem.

These represent just a few of the many ways that researchers are exploiting the properties of waveguide to create antennas that a decade ago would have been of little interest for commercial applications. However, if there’s any market that will foster the continued development of waveguide technology in the coming years, it will be the wireless industry, because no other needs it more.