An array or bank of load resistors is often required for testing power products, characterization of solar panels, and many other applications that require evaluation under various well-defined loads. While simple rheostats can provide continuous variation in load resistance, their power rating decreases as the value of their resistance is decreased, and they have series inductance that’s undesirable in some cases. Instead, a resistor “load bank” is a better alternative.

Some of the features that engineers look for with a load-resistor bank are:

This modular resistor load bank topology, which uses four switches and five resistors, also acts as a building block (Fig. 1). It varies the resistance value in 12 steps; if more than 12 steps are required, another such module can be connected in parallel, thus increasing the number of steps to 144.  In this way, it’s possible to get a large number of steps without increasing the complexity.

1. The load-resistor bank topology with four switches and five resistors is straightforward. 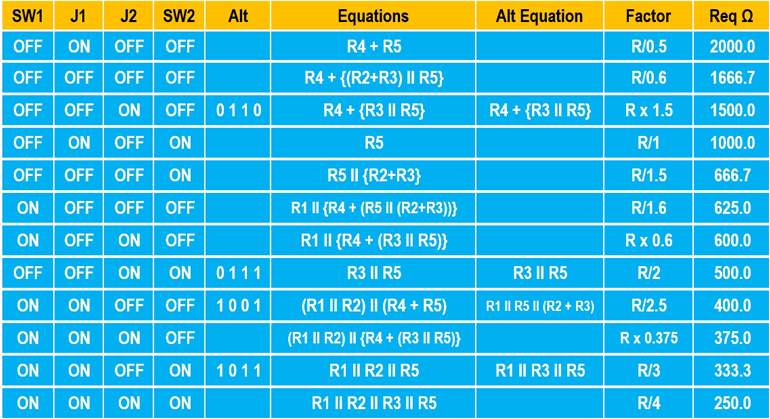 The division/multiplication factors for 12 switch settings needed to calculate Req are in the column “Factor.” These factors have been derived when all five resistors are of same value equal to R Ω. The values shown in column “Req” have been calculated for the case R1 = R2 = R3 = R4 = R5 = 1000 Ω.

With all resistors at 1000 Ω /2 W, the resulting specifications are:

Figure 2 shows the front panel of the load bank, while Figure 3 shows the mounting arrangement of switches and resistors. 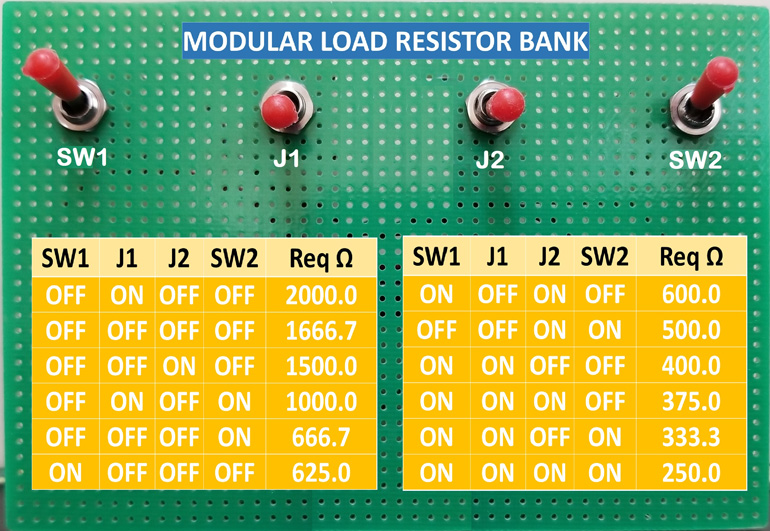 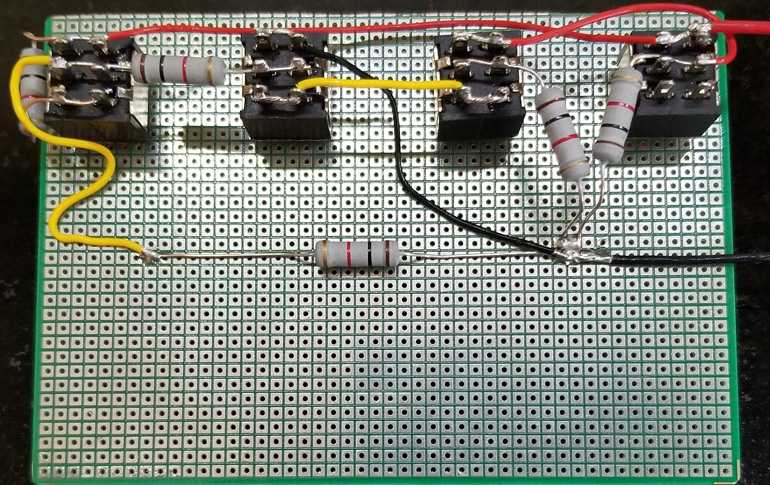 3. Mounting of switches and resistors on the printed wiring board is non-critical.

This simple resistor load bank is very compact and cost-effective. It uses very few components and can produce 12 different load-resistor values. However, some situations require a larger number of steps.

Using Multiple Load Banks for a Larger Number of Steps

Using the basic load bank module described above, with two modules simply connected in parallel, enables the generation of more steps (Fig. 4). For each setting of resistance for BANK1, we have 12 different settings of BANK2. 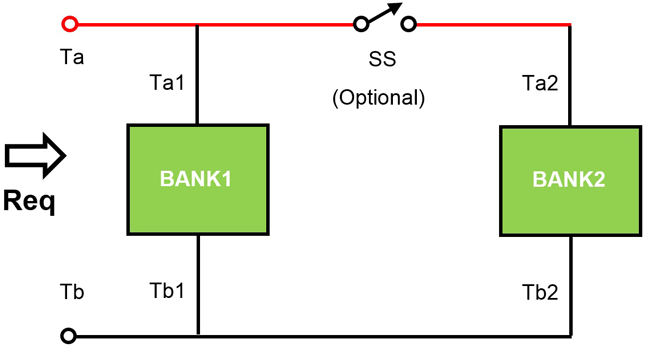 4. The parallel connection of two load banks enables an increased number of steps for Req.

The equivalent resistance of load bank is given by:

There are two ways in which the load banks can be interconnected:

Interconnection with a switch in series

Interconnection without switch in series

In this case, switch SS isn’t present and both banks are permanently connected. Hence, total number of steps is 144.

The selection of resistor values is important. If the two load-resistor banks have identical resistor values, then a large number of duplicate values will be generated. Therefore, it makes sense for the two banks to use slightly different values. Consider the case where all five resistors of BANK1 are 1000 Ω while those of BANK2 are 910 Ω. The equivalent resistor values for both the banks are shown in Table 2.

Table 2: Req values for BANK1 and BANK2 for 12 switch settings. 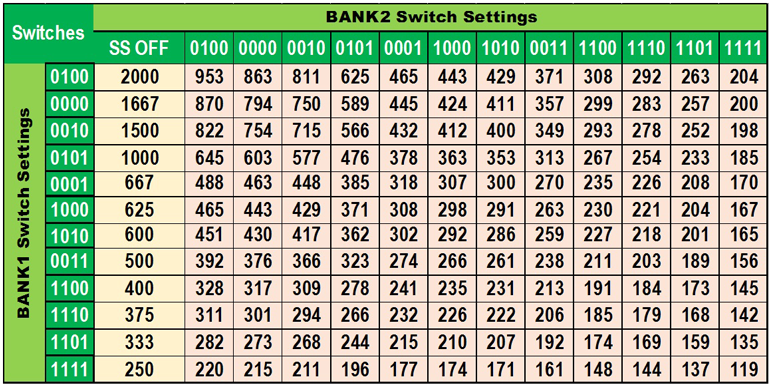 Table 3: Req values in ohms for the load bank of Figure 4.

For this table, note that:

For two banks connected in parallel, with all resistors of BANK1 at 1000 Ω/2 W and all those of BANK2 at 910 Ω/2 W, the resulting load-bank specifications are:

Resistance Plot: Figure 5 shows a plot of load bank resistance Req against the step number (with SS). The step number has been sequenced for getting monotonically decreasing resistance values. If switch SS isn’t used, the 12 values shown in the column “SS OFF” will not be plotted, and there will be only 144 steps. 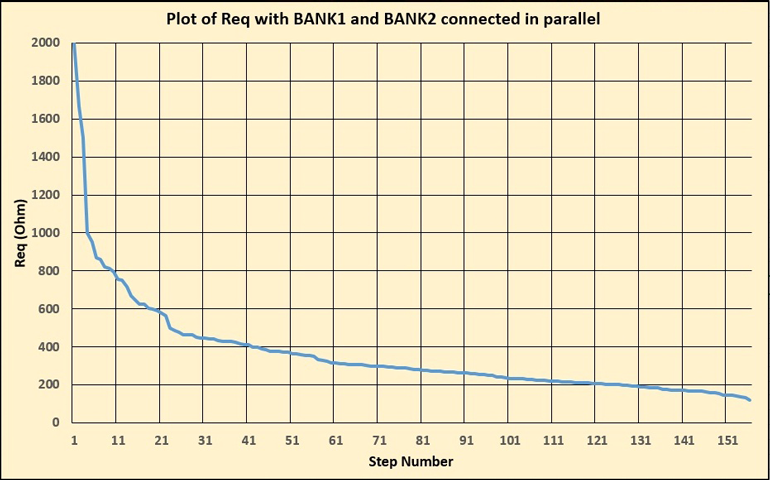 5. The variation in Req with BANK1 (R = 1000 Ω) and BANK2 (R = 910 Ω) resistors (with SS), with the step number sequenced for obtaining monotonically decreasing resistance values.

How to Increase Number of Steps in the Basic Topology

Therefore, if we use different resistor values for R2 and R3, it’s possible to get two additional steps.

Therefore, the load banks can produce 14 steps each. Using the above values for BANK1 and BANK2 yields 196 steps without SS and 210 steps with SS. Thus, without any additional cost, there’s further improvement in the number of steps for Req.

The basic load-resistor bank topology is less complex and uses fewer components. However, if a greater number of steps is required, two banks can be connected in parallel as the load bank design is modular. Using simple algorithms, it’s possible to program the load bank to generate resistance values in an increasing or decreasing stepped fashion. Due to its simplicity and modular approach, this load-bank topology should find widespread use and may even find application as a resistance “synthesizer” inside an IC.

Dr. Vijay Deshpande worked for more than 30 years as electronics hardware engineer at various companies. He retired recently from Honeywell India and is now working on electronics and solar energy projects as a hobby.