The requirement to channel very high electrical current narrows the potential metallization systems down to the best conductors: silver (Ag), copper (Cu), or aluminum (Al). Of these, thick Cu and Al are more favorable due to higher resistance to electromigration compared to Ag.

Such high tensile stress can result in dielectric cracking. For this reason, very high flexural strength ceramics like Si3N4 are increasingly being utilized for the highest power applications where the temperature cycling stresses are the largest.

The focus of this article will be to provide a quantitative evaluation of the thermal resistance between the metallization system and the dielectric by utilizing a laser-flash technique. The thermal resistance of this interface will directly impact heat conduction through the package since this interface is located between the die and the heat sink. A schematic of the thermal path for a packaged power semiconductor is shown in Figure 1.

1. Shown is a schematic of a packaged power semiconductor illustrating the heat path from the die, through the package to the heat sink.

The laser flash technique described here follows ASTM E 1461. In this measurement, a short laser pulse illuminates the front surface of the sample, creating a heat pulse. The subsequent temperature rise is measured on the back surface of the ceramic using a sensitive infrared detector. The overall temperature rise is typically only a few degrees centigrade. The temperature rise on the back surface as a function of time is fitted to a one-dimensional heat flow model and the thermal diffusivity of the sample is determined.

Thermal conductivity is the product of the sample density, heat capacity, and the measured thermal diffusivity. A typical temperature rise profile measured on the sample backside as a function of time is shown in Figure 2. 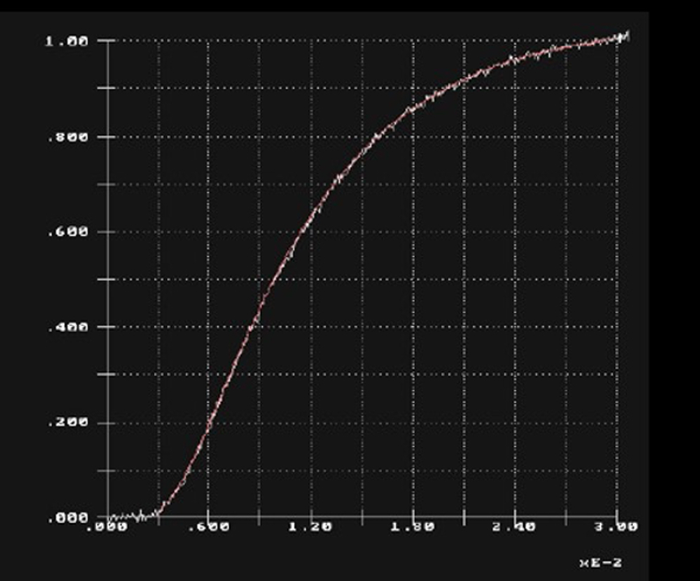 2. The temperature rise on the backside of a thermal conductivity sample is shown as a function of time in the laser-flash measurement system.

The time = 0 for this profile begins when the laser pulse is incident on the sample. Figure 3 depicts a schematic of the laser-flash system used for these measurements.

For a monolithic sample, this temperature rise is fitted to a 1D heat flow model; the thermal diffusivity of the sample is determined from this fit. The time-dependent temperature of the backside of the sample T(t) in the 1D heat from the model is described by:

If we input the experimentally measured time required for the sample backside to reach 0.5 Tm, t1/2, then from the equation above, calculate the thermal diffusivity:

The thermal conductivity is the product of the thermal diffusivity a, sample density (r), and heat capacity cp.

The discussion above is relevant for monolithic samples. However, the laser-flash technique can also be applied to layered structures. In this case, a model is utilized which considers one dimensional heat flow through a layered structure. Application of the diffusion equation to layered structures is discussed in Reference 1 and references therein. The input requirements for a three-layer model are shown in Table 1. 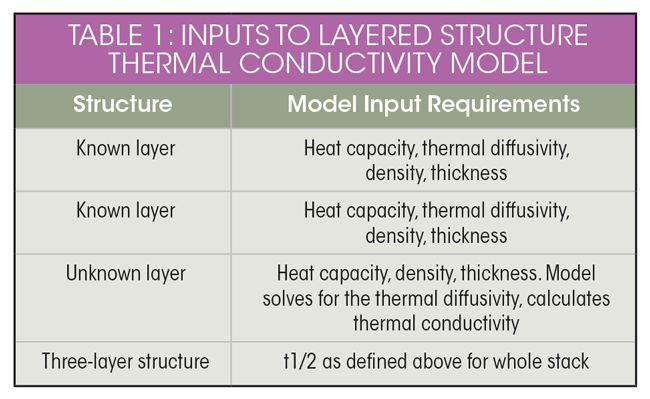 This measurement is very useful for evaluating thermal resistance in “real-world” situations since the “unknown layer” comprises the layer itself and the interfaces between the “unknown” and known layers.

Here, we will utilize this approach to quantify the thermal resistance between the metallization systems relevant to power-semiconductor packaging and the ceramic dielectric layers. We will consider the three cases described in Table 2.

The DBC sample that was measured came from a commercial DBC vendor. The active Cu samples were prepared from commercial ABA Cu alloy foils that were brazed in an argon atmosphere at 1025°C to AlN, Si3N4 substrates and to OFC Cu foil. In addition to the sandwich structure samples (with ABA in the middle layer), a sample was constructed with Si3N4 dielectric bonded to ABA Cu, which was bonded to Cu foil.

Argon was chosen to avoid any interaction between the Ti, Al, and Si in the ABA Cu foil and the furnace atmosphere. All samples were x-rayed to ensure that there were no voids at the braze joints.

The results of the laser-flash thermal conductivity measurement and layered structure model for the packaging systems outlined in Table 2 are summarized in Table 3. 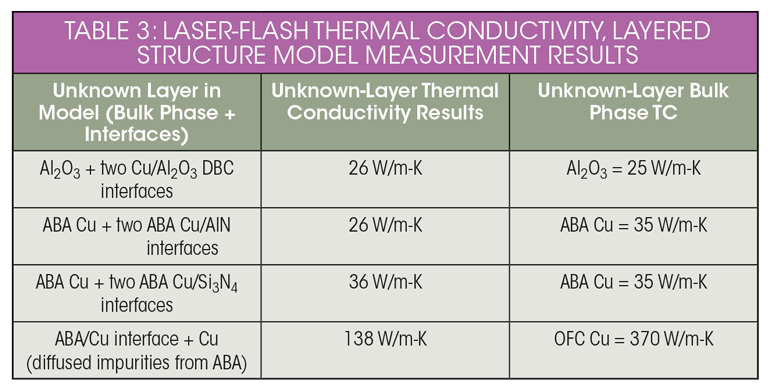 Key observations from these measurements include:

All of the samples discussed above were cross-sectioned with an ion mill and then imaged on a high-resolution SEM.

In Figure 4, the interface between the Al2O3 and Cu with the DBC bond is shown at 10,000X and in Figure 5 shows a high-resolution image at 160,000X. It’s clear from this figure that the Cu/CuO interfacial layer in DBC is extremely thin, less than 90 A. 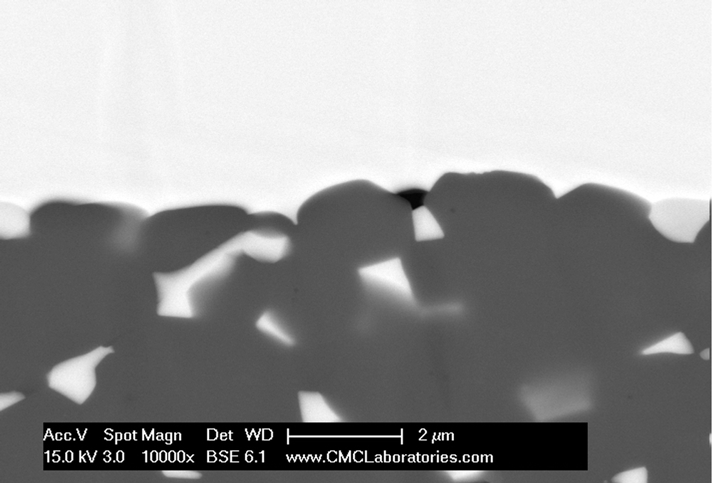 4. This is an SEM image of the Cu/Al2O3 interface in the DBC sample. 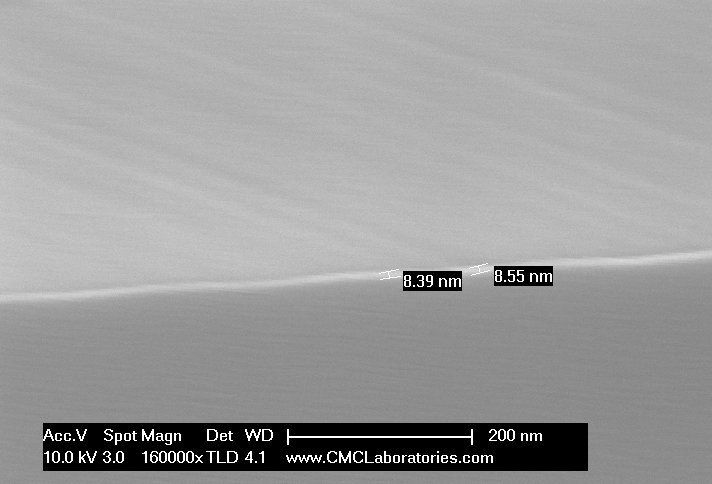 5. This is a high-resolution SEM image of the Al2O3/Cu interface in DBC.

Figure 6 shows an ion-mill cross-section for ABA Cu on Si3N4. In this case, the interfacial phases are much thicker, on the order of 1 µm. 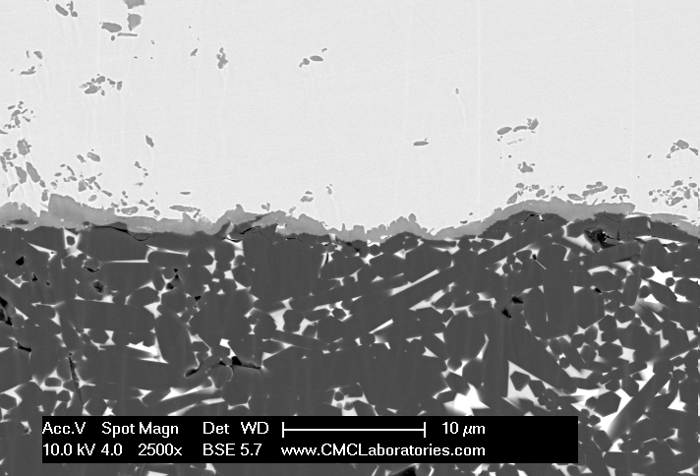 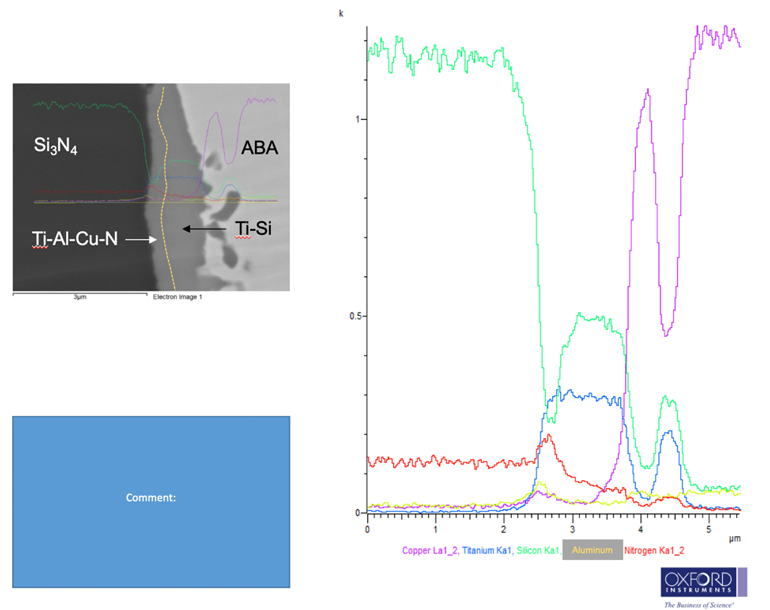 7. This elemental map was taken in an SEM with EDS of the ABA Cu/Si3N4 interfacial phases.

Figure 8 illustrates an EDS analysis in the SEM of the interface between the ABA Cu layer and the AlN ceramic. In this case, a distinct Cu-Ti-N layer that’s about 2 µm thick has formed. The laser-flash measurements indicate that this interfacial layer has a measurable impact on the overall thermal impedance of the structure, decreasing the effective thermal conductivity from 35 to 26 W/m-K. 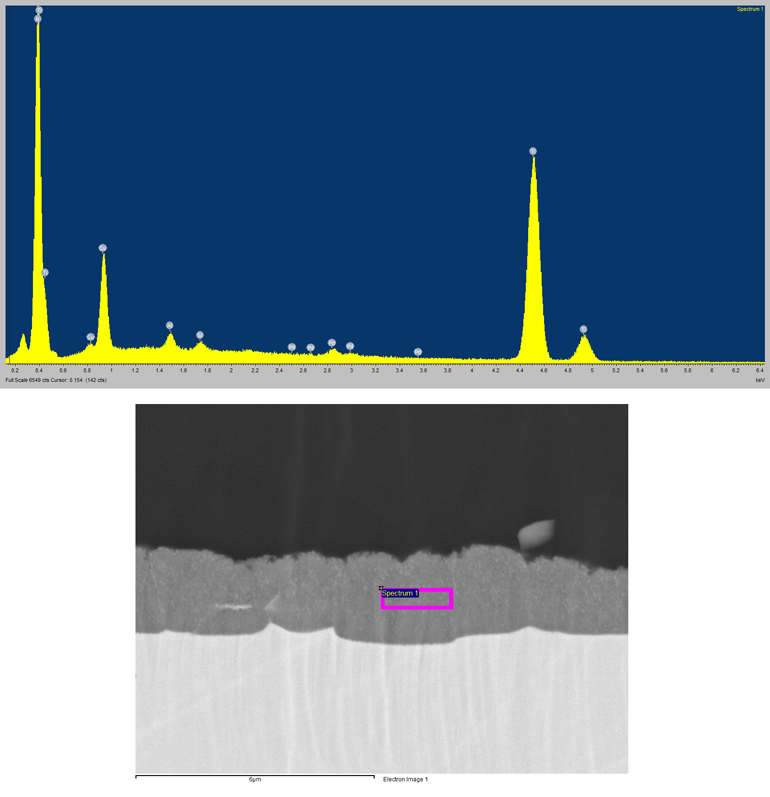 8. An elemental analysis was taken in an SEM with EDS of the ABA Cu/AlN interface. 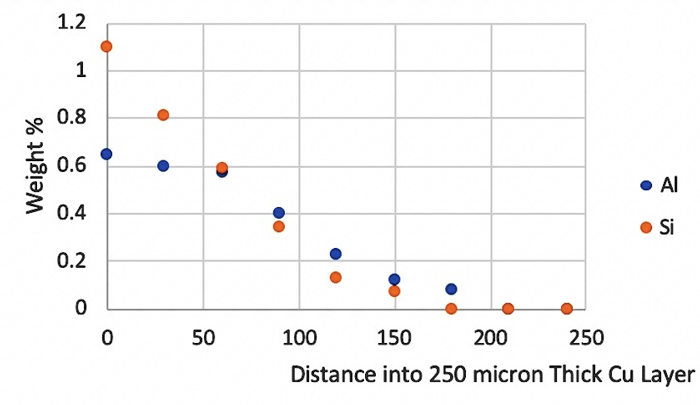 9. Al and Si impurity concentration is plotted as a function of distance from the ABA Cu/Cu interface into the Cu layer.

The significant impact of the thermal conductivity of Cu on impurities, as observed here, is due to electron-impurity scattering, since heat is carried in metals by conduction electrons. This impact can also be seen in electrical conductivity (Fig. 10). In this case, the change in Cu resistivity for additions of various impurities (including Al and Si) is shown. Note that both heat and electrical current in metals is carried by electrons; therefore, both properties are impacted by electron-impurity scattering. 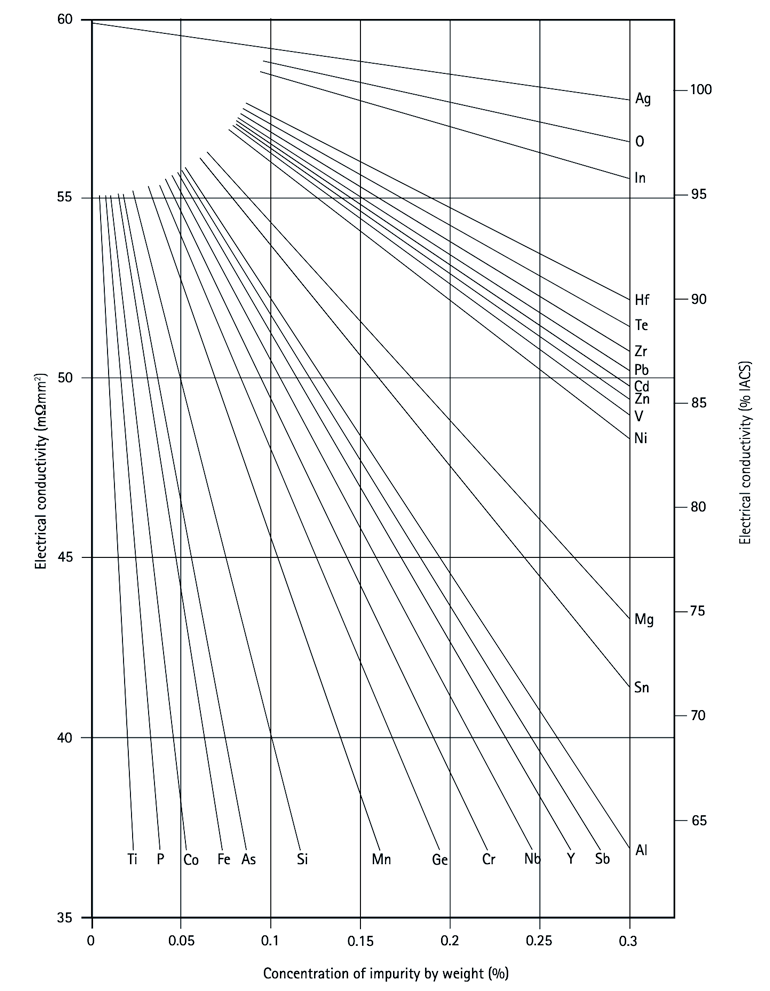 Laser-flash thermal conductivity evaluations of ABA Cu on Si3N4 as well as ALN ceramics has been performed, in addition to evaluation of DBC Cu on Al2O3. Bulk thermal conductivities of the ABA Cu, alumina, ALN, and Si3N4 were measured. In addition, the thermal diffusion time through the layered structures were also determined and a model was utilized to determine the interfacial thermal resistances in each system. The following findings resulted from this study: