ROHM has been able to successfully improve the traditionally difficult tradeoff faced by SiC device manufacturers to strike a balance between a reducing a MOSFET’s on-resistance and the expense of its short-circuit withstand. The new devices are fabricated using an improved double trench structure, which gives them 40% less on-resistance per unit area over conventional products without any sacrifice in short-circuit withstand time (see figure below). 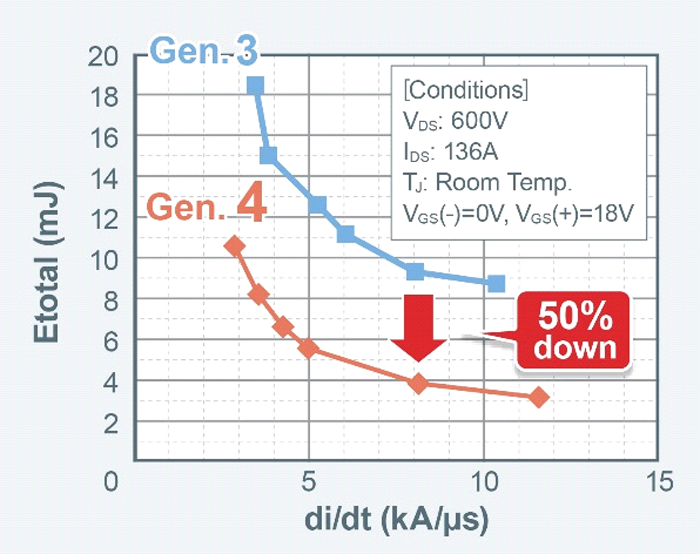 Bare chip samples are available now; discrete packages will be offered in the future. Information about ROHM’s third-generation devices is available at: https://www.rohm.com/products/sic-power-devices. For information on ROHM’s fourth-generation devices, contact jpontious@rohmsemiconductor.com.

Most of the materials and resources are available free on the STM32 D-Power website, which include the all-in-one STM32 digital-power Discovery Kits, dedicated power-supply boards, and embedded software components—software tools created by ST Authorized Partner Biricha Digital. It supports three levels of STM32 MCUs that combine the benefits of standard Arm Cortex-M cores with integrated features optimized for digital-power applications. The site offers documentation, evaluation kits, videos, and guides that cater to power-supply designers from beginner to expert.

Thanks to the global pandemic, it will be at least another year before semiconductor-savvy savants will be able to gather on the shores of Waikiki to ponder the future of electron devices. However, they will still be able to attend a virtual gathering of the 66th annual IEEE International Electron Devices Meeting (IEDM), scheduled for December 12-16, 2020. 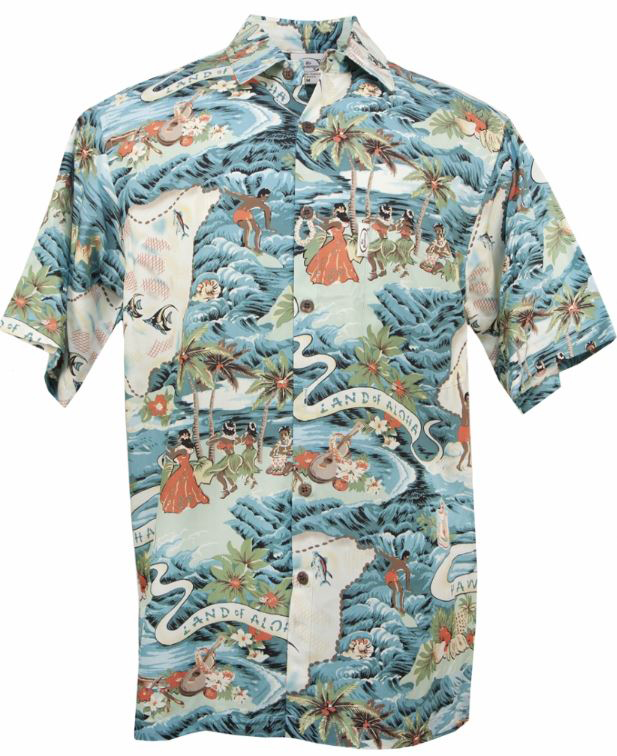 Organized by the IEEE Electron Devices Society, this year’s virtualized IEDM will offer both live and recorded sessions covering technological breakthroughs in semiconductor and electron device technology and discussions of the world’s best original work in all areas of microelectronics research and development. 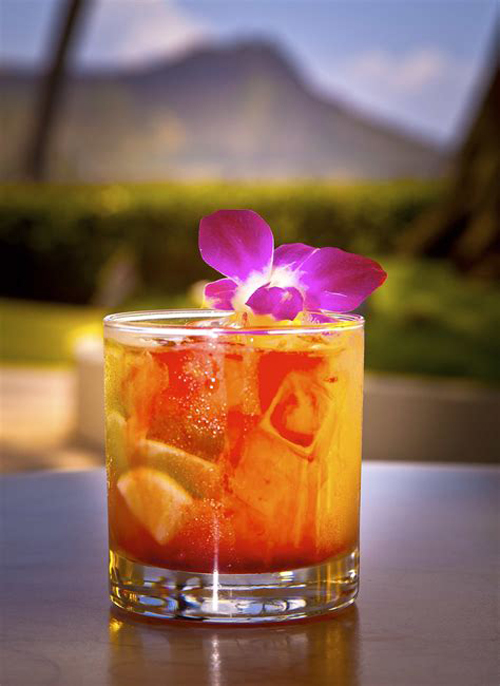 More details about the 2020 IEDM will be announced in late summer. In the meantime, you can follow IEDM via social media:

Toshiba Electronics Europe has introduced eight new super-junction N-channel power MOSFETs to its DTMOSVI series. The 650-V-rated devices all offer a 40% reduction in drain-source on-resistance × gate-drain charge (QGD) figure of merit (FoM) over Toshiba’s previous generation of DTMOS devices.  The new MOSFETs are targeted at switch-mode power supplies for a broad range of industrial equipment (including data-center infrastructure, backup power sources, and the power conditioners of photovoltaic generators). When used in these applications, the lower resistance translates into an efficiency of improvement of approximately 0.36%. 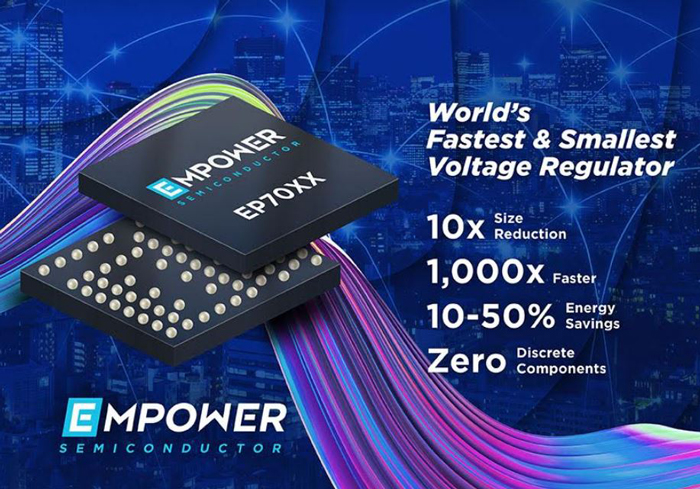 The EP70xx’s digitally configurable hardware architecture simplifies the process of integrating dc-dc converters into a design by eliminating the need for input/output filter design, feedback resistors, or external loop-compensation components. They can be easily configured via its I3C/I2C port using the factory-supplied GUI. Once in service, its unique architecture allows the regulators to deliver peak efficiencies of up to 91% with a nearly flat efficiency curve up through 10 A of output current.  The accelerated dynamic voltage scaling  enables rapid, lossless processor state changes that reduce processor power consumption by 30% or more.

Keysight Technologies is expanding its RP7900 Series with two new bidirectional, regenerative dc power supplies. They offer integrated safety features and higher current outputs needed to test the larger batteries being used in the next generation of electric vehicles. The supplies’ unique regenerative design enables the energy normally consumed to be cleanly returned to the grid, saving costs associated with energy consumption and cooling.

Pricing and availability: The RP7900 Series is available now, starting at USD $27,335. Additional information can be found at www.keysight.com/find/RP7900.

Is the airline industry really ready to embrace electric propulsion? Five years ago, electric airliners were, at best, a technology for a far-off future. But now, a combination of growing environmental concerns, wildly fluctuating fuel prices, and steady improvements in propulsion technology have moved electric airliners much closer to our event horizons.

While electric propulsion still faces several major technical challenges before it’s mature enough to use in big airliners, Ampaire is helping accelerate the trend by offering a so-called hybrid solution for electrifying existing airframes. A hybrid prototype, sporting one gasoline engine and one electric engine, has already been successfully tested and is providing valuable engineering data for Ampaire’s upcoming products.

Based in Hawthorne, Calif., Ampaire is developing the Tailwind, a small, all-electric airliner, intended to help short-haul regional airlines reduce their operating costs by up to 70% and achieve a similar drop in their environmental footprints. The sleek composite-bodied nine-passenger craft uses a ducted pusher prop and appears to shares many characteristics with the Alice Commuter, being developed by Israeli-based eViation, scheduled to enter production in 2022.

One of the critical elements in the airliner’s development process is the power plant (see image below), which must be efficient, lightweight, easy to manufacture, and reliable—four seemingly orthogonal requirements. In designing a prototype of the motor and drive electronics, Ampaire’s engineering team decided that the best way to test the system under real-world conditions would be to retrofit an existing twin-engine aircraft, replacing one of its gasoline-burning power plants with an electric motor. 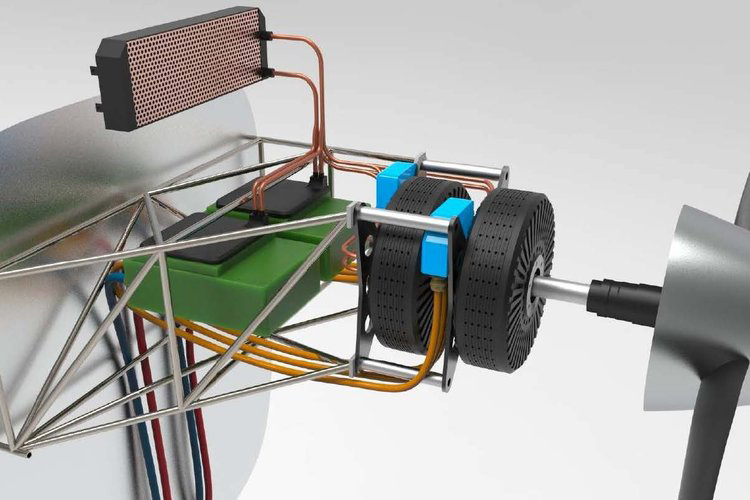 They found an ideal candidate in Cessna’s 337 Skymaster, a six-seat utility aircraft known as much for its unusual “push-pull” propeller configuration as its large cargo capacity and ease of operation. This allowed them to create an inline, parallel hybrid architecture in which the Skymaster’s original gasoline engine remains in the rear of the aircraft, and Ampaire’s electric-powered propeller replaces the front engine. According to Ampaire, this so-called hybrid system allows power to be dynamically shared across both propulsion systems to optimize speed, power, fuel consumption, or noise. 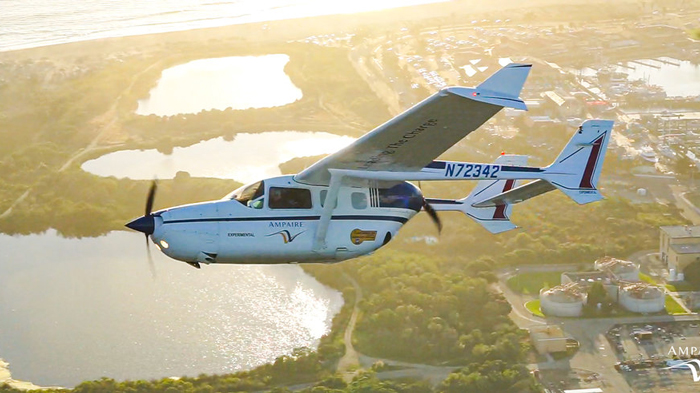 The power-delivery system for the Ampaire prototype plane consists of a high-voltage battery pack. Depending on its state of charge, the pack’s output voltage can range between 500 and 738 V. Rather than use a separate battery to power the radios, instruments, and other avionics that require a 28-V supply, Ampaire’s design team turned to Vicor, a power engineering and manufacturing company. Vicor developed a two-stage solution consisting of a fixed-ratio bus converter (BCM) to isolate and downconvert the high-voltage from the battery, followed by a low-voltage dc-dc converter to regulate the output of the bus converter to 28 V.

In addition to proving the technology, Ampaire’s president believes that hybrid aircraft may be a large potential market for the company in the form of retrofit kits for existing multi-engine airframes. These could help dramatically reduce operating and maintenance costs.

This isn’t the last you’ll see of Ampaire’s Tailwind in Electronic Design. We’ll be taking a closer look at the airliner, and the technology behind it, in a feature about electric aircraft that’s planned for the fall. So be sure to stay tuned for that, and other “shocking” tales of electric airplanes here in Electronic Design’s Power Management section!