Most electric car batteries today last 100,000 to 200,000 miles before replacement, while most current gas-engine cars only last 150,000 miles before joining the scrap heap. So why are EV makers seek a million-mile battery?

The answer is they are preparing for what comes next: Allowing EV batteries to have second lives in stationary grid storage systems by enabling a vehicle to send power back into the grid via a bidirectional charger. With a battery capable of lasting a million miles, suppliers would not have to worry about accelerated battery degradation and the need for early battery-pack replacement in vehicular applications. For EV buyers, committing to a vehicle-to-electric power grid (V2G) program also could reduce the upfront cost of the batteries.

Given the intermittent generating capability of energy renewables such as wind and solar, grid balancing—the matching of supply and demand—becomes critical for maintaining the reliability of the electricity grid.

Instead of using expensive generators that burn fossil fuels, there’s the sense in the industry that EVs could be used as a power source to handle demand spikes in a way that could save utilities (and thus consumers) money and reward EV owners for their participation. To do so, vehicles would have to be grid-integrated with controllable charging and discharging rates (two-way power flow).

For its part, GM recently made news about its efforts to produce batteries with improved range and longer life (Fig. 1). It’s calling those batteries “Ultium.” A new joint venture between GM and LG Chem, called Ultium Cells LLC, has started clearing ground for an Ohio battery factory that will supply the power packs for upcoming electric vehicles.

Ultium batteries are unique in the industry because the large-format, pouch-style cells can be stacked vertically or horizontally inside the battery pack (Fig. 2). This allows engineers to optimize battery energy storage and layout for each vehicle design. Ultium-powered EVs are designed for Level 2 and dc fast charging. Most will have 400-V battery packs and up to 200-kW fast-charging capability. GM’s truck platform will have 800-V battery packs and 350-kW fast-charging capability. The new Ultium batteries are pouch-shaped, rather than the more traditional cylindrical form adopted by most manufacturers. 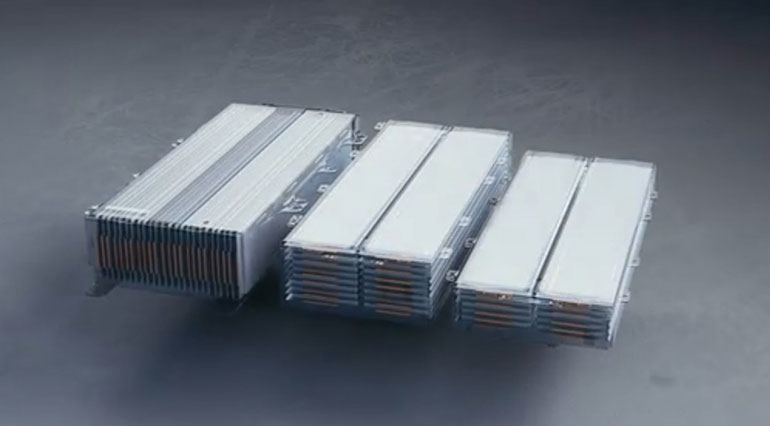 2. Passenger cars will use horizontally stacked cells in low-profile packs (center and right), while trucks will be able to have vertical cell stacking (left). (Source: General Motors)

The large-format pouch cells employ a nickel-cobalt-manganese-aluminum chemistry that was developed within GM. Compared to existing cells, they’re lower in cobalt content but add aluminum to the cathode structure for longer life. EV manufacturers usually use nickel-cobalt-aluminum (NCA) or nickel-manganese-cobalt (NMC) batteries on passenger vehicles because of their higher energy density, which is critical in determining how far an EV can drive on single charge.

GM’s next-generation vehicles will be built around these large-format pouch cells arranged horizontally or vertically into modules, with 6 to 24 modules adding up to 50 to 200 kWh. This arrangement could enable a GM-estimated range of up to 400 miles or more on a full charge. Passenger cars will use horizontally stacked cells in low-profile packs and modules, while trucks will be able to have vertical cell stacking—with, in some versions, a double-stacked pack that allows for 800-V charging.

Even before those batteries launch, the company is already aiming for a longer service life to be put to use in upcoming autonomous and shared-mobility vehicles. One such vehicle is the Cruise Origin, a self-driving EV and the first product revealed using GM’s third-generation EV platform and Ultium batteries. It was shown to the public in January in San Francisco.

Next will be the Cadillac Lyriq luxury SUV, followed by the Ultium-powered GMC Hummer EV. Production is expected to begin in Fall 2021 at GM’s Detroit-Hamtramck assembly plant, GM’s first assembly plant totally dedicated to EV production.

Zero-cobalt and zero-nickel cells are being tested by GM, as well as electrolyte additives, which are known to improve the performance of lithium-ion cells. “We do have million-mile battery life, especially in shared mobility usage, in our sights,” said Tim Grewe, head of GM’s global electrification and battery systems.

Another goal, according to GM President Mark Reuss, is to produce Ultium batteries for below $100 per kilowatt-hour. The company’s current powerpacks cost approximately $145 per kWh for the Chevrolet Bolt EV when it launched a few years ago. The company plans to get below $100 per kilowatt-hour in part by using larger cells that require fewer connectors to function, and in part by reducing use of high-cost cobalt in its batteries.

Cutting the Amount of Cobalt

Meanwhile, Tesla’s million-mile battery effort is being developed in partnership with Chinese battery maker Contemporary Amperex Technology Ltd., or CATL. Tesla plans to introduce a new low-cost, long-life battery in its Model 3 sedan in China, which it expects will bring the cost of electric vehicles more in line with gasoline models and allow EV batteries to have secondary lives in the electric power grid (Fig. 3). 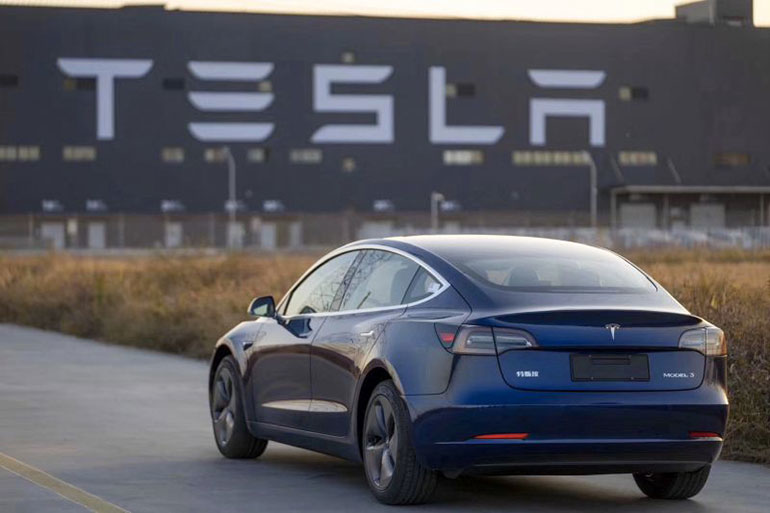 3. A new long-life battery is expected for the next version of Tesla’s Model 3 in China.

The new batteries reportedly will rely on low-cobalt and no-cobalt battery chemistries, and the use of additives and coatings will enable them to store more energy for longer periods. Cobalt is the most expensive metal in EV batteries, costing in the neighborhood of $30,000 a ton (down from nearly $100,000 a ton in 2018). Tesla is a proponent of NCA technology, which requires less than a third the amount of cobalt than first-generation NMC types. Presumably, Tesla would make use of CATL’s lithium-iron-phosphate batteries, which don’t use cobalt.

Tesla’s current NCA batteries are jointly made with Panasonic at Tesla’s “gigafactory” in Nevada, and the company buys NMC batteries from LG Chem in China. CATL also plans to supply Tesla with an improved long-life NMC battery whose cathode is 50% nickel and contains just 20% cobalt.

Tesla is working on recycling and recovery of such expensive metals as nickel, cobalt, and lithium through Redwood Materials, run by former Tesla CTO JB Straubel, as well as developing new “second life” applications of EV batteries in grid storage systems like the one Tesla built in South Australia in 2017. That facility uses a Tesla Powerwall, the company’s rechargeable lithium-ion battery stationary energy-storage product, to store solar power from panels on the rooftops of 1,000 homes and release energy back into the grid as it’s needed.