The “Interoperability Inside” Logo | Electronic Design

With exponential growth in the Internet of Things and the countless number of sensors, cameras, controllers, and other remote devices being widely deployed around the world, Power over Ethernet (PoE) has become a leading solution for more streamlined deployments and greater cost savings. What’s more, as power demands increase for such things as wireless access points needed to serve an increasingly mobile-connected public, the issues of standards conformance and assured interoperability of equipment have come to the forefront.

In particular, what has been needed to overcome confusion in the PoE ecosystem, and prepare equipment suppliers, end users, and installers for a growing and more complex Ethernet ecosystem, is a readily available testing suite that delivers on the interoperability promise of IEEE 802.3 PoE standards.

In response, many of the individuals involved in standards development convened under the auspices of the Ethernet Alliance to launch a second generation of its PoE Certification Program. Much like the renowned “Intel inside” branding associated with personal computers, the certification program is based on marking equipment with “EA Certified” PoE logos to identify port attributes. It brings a multitude of benefits across the entire ecosystem—all of which have a positive impact on ROI. The logo delivers an “Interoperability Inside” promise to the various stakeholders in a PoE-deployed system.

In developing the certification program, the team first identified the key benefits for all principles working in the PoE space as summarized in the table above. These include:

The logo itself is visually straightforward, simply showing “arrow out, power out” and “arrow in, power in.” Clearly, the number on the load needs to be less than or equal to the number on the switch. This was a key issue in Gen1 of the certification program.

Now, however, instead of switches primarily sending the same type of power across all ports (Type 2 for example), a more likely future scenario on a 24-port chassis might be having four ports rated to send Type 4 power, four to eight of Type 3,  and the rest being Type 2. For installers, that’s going to be a lot more challenging as PoE installations become increasingly complicated. The “EA Certified” solution allows for installers to just quickly look at the switch port labeling instead of having to open an instruction manual and identify exactly which ports are set at a particular power level.

Overall, equipment manufacturers with the “EA Certified” PoE logo can not only expect fewer calls, but they can also achieve lower support costs for customer calls by deferring those from non-certified suppliers, particularly in an environment where there’s diminishing support from system vendors. 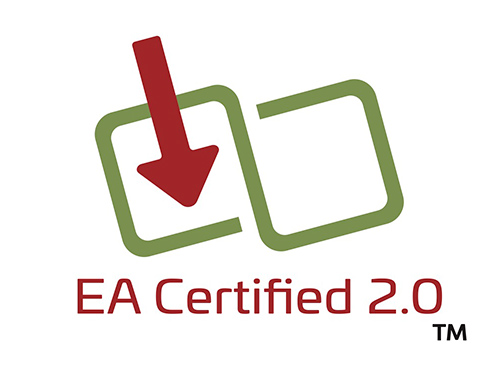 In the future, the first question customers can expect when reporting an interoperability challenge is “Does both sides of the cable have the logo?” Whichever side does not have the logo will become the focus of any continued debug effort. Further upstream in the ecosystem, IC vendors can much more quickly focus their attention in debug efforts as well.

For equipment installers, the logo will improve outcomes with end users by significantly decreasing installation times and the likelihood that installed equipment will experience a load that causes a fault. Consequently, installers can save time and increase PoE deployments with greater troubleshooting capabilities, with the added benefit of greatly reducing call backs.

Because the logo signifies a range of benefits, having it increases the value proposition of PoE for the end customer. This is very much in line with the aforementioned “Interoperability inside” model and can positively impact everyone in the channel.

Many working in the PoE space share an opinion that one of the top things hindering PoE adoption at a higher percentage, other than its power limitations, is that there’s no one broadly defined and accepted vision of PoE. Too much confusion exists in the market. Despite having a standard for decades, no one recognized test suite translates the standard into certification tests and an easily identified mark.

To overcome this, the Ethernet Alliance is leveraging its expertise and recognition as a leader of advancing Ethernet technologies to establish a logo that clearly defines PoE so that people will look for it as part of their decision-making when purchasing equipment.

Consider a smaller end-equipment manufacturer that might only ship 100,000 switches, and maybe only one model that integrates the PoE feature. Hypothetically, the company may only be shipping 5,000 PoE models. Even if you already have an existing validation suite to test for PoE functionality under the IEEE 802.3at standard, there’s still a whole lot of work to get ready for the latest standard and to validate your switch at a black-box level.

By trusting in the Ethernet Alliance PoE certification and logo, you needn’t worry about the nuts and bolts of incorporating a PoE feature. Providing end-equipment manufacturers with this level of confidence ultimately saves on evaluation costs and allows them to significantly reduce equipment cycle timelines in order to bring products to market faster and cheaper.

Because the Ethernet Alliance PoE certification program is the first test validation platform that assures conformance to IEEE 802.3bt, switch and end-device manufacturers now have a means other than relying on data from chip and PoE controller suppliers, which might not deliver full confidence of compliance to the standard.

An affordable official third-party test suite alleviates companies from having to develop a program in-house thats confirm its equipment is IEEE 802.3bt-compatible. And, pursuing the certification program and logo attribution provides the opportunity to identify issues early on prior to installation, avoiding the high cost of fixing problems post deployment. These costs, in particular, are extremely painful to both the pocketbook and long-term perceived quality of the manufacturer. Just one of these “in field” interoperability issues could cost millions of dollars in new development and/or foregone opportunity costs.

For companies wanting to fully leverage their PoE deployments, there’s now an option that makes a lot of sense from a pure ROI point of view. Looking at the table again, it’s hard to imagine a scenario that doesn’t return on an investment of ~$25,000-30,000 (annualized) for the end-equipment manufacturers themselves. While hard to estimate, lower customer-service costs alone will offset the modest costs, and avoiding (or deferring to the non-logoed side of the troubling system) even one significant interoperability issue can easily save a company thousands of dollars in debug.

The evolution of Ethernet is continuing at a notable pace and PoE is positioned to experience considerable growth over the coming years. Interoperability of PoE equipment and assured reliability of devices for end users is essential. Once earned, the “EA Certified” PoE logo visual aid delivers benefits for all stakeholders in the PoE space.

Thomas Lewis is an Ethernet Alliance member and Marketing & Applications Manager for Power over Ethernet (PoE) Solutions at Texas Instruments.