The eNinja Chronicles: “What’s that Weird Yellow Thing Doing in the Garage?”

I’m not quite sure how it happened, but my garage seems to have summoned a homemade electric motorcycle into existence. I hadn’t been looking for one—I expected my first all-electric vehicle would be a lightly used Chevy Volt, Bolt, or Nissan Leaf.

Nevertheless, there it is, lurking like an electric yellow shark in the back of my garage, tucked behind my daily driver (a Honda Silverwing 600) and the Suzuki Katana 750 that fell into the garage’s field of attraction a year or so ago. They are arranged in a staggered formation to allow easy egress for whichever machine I’ll need that day, and to make room for the Tesla motor/drivetrain assembly that also managed to make its way into the garage.

But I swear, other than the oh-so-sensible Silverwing, none of the other stuff is my fault—it’s the garage’s.

Located behind our nondescript brick ranch home, the garage was built by the original owner out of recycled materials he’d scavenged or otherwise appropriated, some of which came from mysterious sources that remain legend in our neighborhood. Perhaps the building’s strange origins account for the fact that it seems to exist in a different dimension—parallel, but not quite congruent with the one where most of my very normal suburban existence occurs. Whatever the reason, it appears that the space within its walls is not only subject to the physics that govern the conservation of energy, but also the conservation of weirdness.

The trouble began several years ago, after I’d cleared out a home-built hovercraft and a biodiesel converter rig to make enough room to refurbish the ultralight aircraft I’d built, flown, and stored away nearly 20 years earlier. After the purge, the garage was much neater and easier to work in, and the ultralight (a Kolb Ultrastar) seemed to have a sufficiently high coefficient of weirdness (WC) to prevent any additional junk from accreting. Unfortunately, the ultralight was destroyed in a crash, leaving half the floor space open, and creating a powerful weirdness deficit that immediately sucked in the Tesla motor/drivetrain, the Katana, and a three-wheeled recumbent bicycle.

At first, it seemed as if the new acquisitions were weird enough to establish a new equilibrium, but the garage was just biding its time…

A few months later, I was idly scanning the motorcycle listings on Craigslist, mostly looking for accessories for the scooter but also doing a little fantasizing about dream bikes. I had just finished ogling an older BMW twin and was scrolling down the page when an odd-looking machine I didn’t recognize caught my eye. The boxy structure where the engine should have been was confusing until I saw the ad’s title, “Electric Ninja.”

Turns out that the bike in question was a late-90s Kawasaki Ninja 250 that had been converted to electric propulsion, and the “boxy thing” was a stack of battery cells from a Nissan Leaf that, according to the ad, gave it a top speed of around 70, a range of 35-40 miles, and crazy-fast acceleration that would match or exceed my 750 Katana.

The bike was priced surprisingly low at $1K, mostly because its batteries had been damaged when they were accidentally discharged below their recommended limits and would eventually have to be replaced.  A little research on eBay revealed that it would cost roughly $1K to replace the damaged battery pack, making it the cheapest—and possibly the coolest—EV I’d ever have a chance to own.

But, even at $2K, a third toy in the garage was hard to justify—especially with a kid still in college—so I consigned the eBike to my rather large bucket list of “someday” projects and adventures. I soon discovered the universe had other plans when, the next day, PayPal notified me that I’d received a payment for $1,000. Figuring it was some sort of scam or mistake, I logged in to discover that an old friend had picked that moment to repay the loan I’d made to him when he was going through a rough patch a year or so earlier. I swear, I’m not making this up!

That weekend, I went to look at the bike, and meet Phil, the guy who built it. Turns out he’s an EE who has spent most of his career designing ultrasonic inspection equipment. He’s also put his professional skills to work on a number of interesting personal projects, including the eBike. As so often happens when two engineers get together, our short visit stretched to more than an hour as he cheerfully explained the thinking behind his choices for the tech that was crammed into the Ninja’s frame, the challenges he’d overcome, and how he’d taught himself to weld to build the frame that holds the battery.

How could I not buy the thing?

The eNinja just after it arrived at the house.

Phil helped me wrestle the machine onto a hitch-mounted carrier behind my Honda Element, after making sure I had the bike’s charger, his collection of extra parts, and some very professionally done documentation. 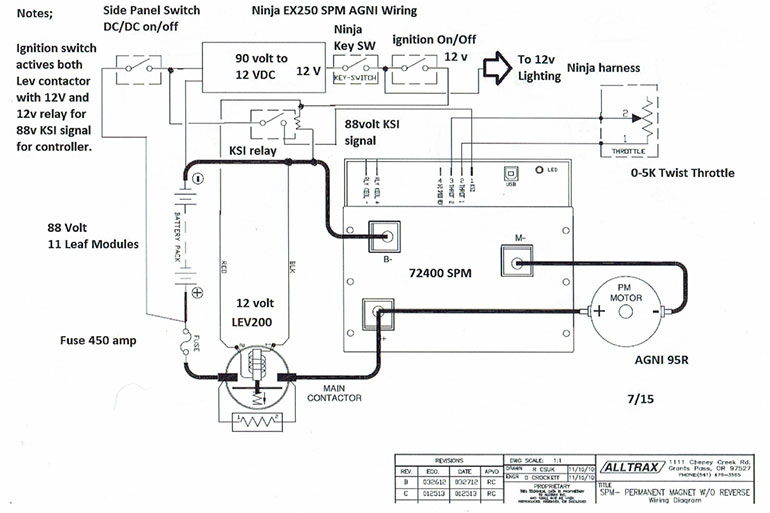 Being a meticulous engineer, Phil prepared a clear, accurate schematic of the eNinja’s wiring.

That documentation, and the short test drives that the damaged battery pack allows me to take, have been very helpful in my efforts to understand exactly what I’ve bought. Here’s a brief overview of the eNinja: 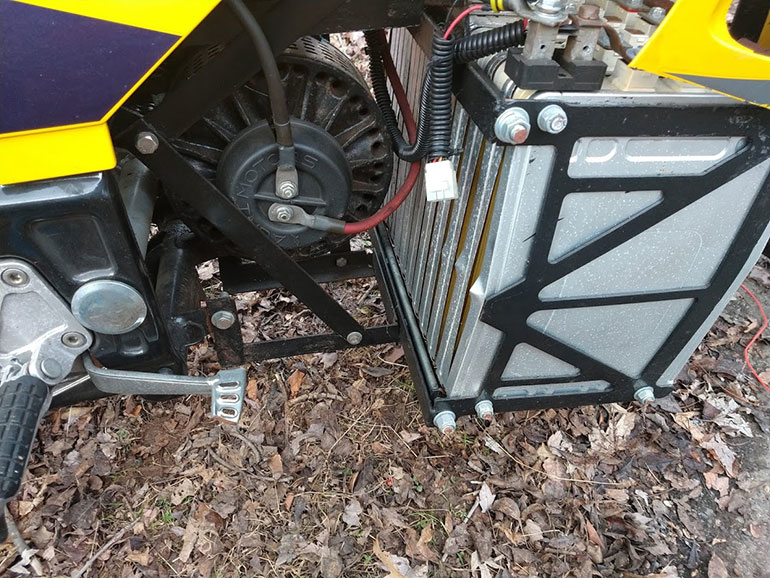 A close-up of the motor and battery. Note the swelling on several of the battery modules, caused by the unintended deep discharge incident before I bought it.

I’ve already started taking the bike out to run short (3-4 mile) errands and it’s a delight to drive. The damaged batteries only provide modest acceleration and a top speed of around 50, but it’s much nimbler than either of my other machines. Range testing will be my first project as I save up the $700-$1K I’ll need for a new battery stack.

Whatever I learn, I’ll share it with you in subsequent installments of The eNinja Chronicles.

Comments? Questions? Tips on sources for replacement batteries? Write me at lgoldberg@green-electronics.com.