The ABCs of Interleaved ADCs

Across many segments of the market today, interleaving analog-to-digital converters (ADCs) offers several advantages in many applications. In communications infrastructure, there’s a constant push for higher-sample-rate ADCs to allow for multiband, multicarrier radios, in addition to wider bandwidth requirements for linearization techniques like digital predistortion (DPD). In military and aerospace, higher-sample-rate ADCs allow for multipurpose systems that can be used for communications, electronic surveillance, and radar, just to name a few. In industrial instrumentation, the need for higher-sample-rate ADCs continues to increase so that higher-speed signals can be measured more adequately and accurately.

It’s first important to understand exactly what interleaved ADCs are about. To get a better understanding, it’s best to look at what’s actually happening and how it’s being implemented. Then we can explore the benefits of interleaving. Of course, as many know, there’s no such thing as a free lunch, so the challenges of interleaving need to be evaluated and assessed.

When ADCs are interleaved, two or more ADCs with a defined clocking relationship are used to simultaneously sample an input signal and produce a combined output signal that results in a sampling bandwidth at some multiple of the individual ADCs. Utilizing m number of ADCs allows for the effective sample rate to be increased by a factor of m.

For the sake of simplicity and ease of understanding, we’ll focus on the case of two ADCs. If two ADCs, each having a sample rate of fS, are interleaved, the resultant sample rate is simply 2 × fs. These two ADCs must have a clock-phase relationship for the interleaving to work properly. The clock-phase relationship is governed by Equation 1, where n is the specific ADC and m is the total number of ADCs:

Another representation of this concept is illustrated in Figure 2. By interleaving these two 100-MSPS ADCs, the sample rate is increased to 200 MSPS. This extends each Nyquist zone from 50 MHz to 100 MHz, doubling the available bandwidth in which to operate. The increased operational bandwidth brings many advantages to applications across multiple market segments. Radio systems can increase the number of supported bands, radar systems are able to improve spatial resolution, and measurement equipment can achieve greater analog input bandwidth.

The benefits of interleaving span across a range of market segments. The most desired benefit is the increased bandwidth made possible by the wider Nyquist zone of the interleaved ADCs. Once again, using the example of two 100-MSPS ADCs interleaved to create a sample rate of 200 MSPS, Figure 3 gives a representation of the much wider bandwidth allowed by interleaving the two ADCs. This creates advantages for many different applications. 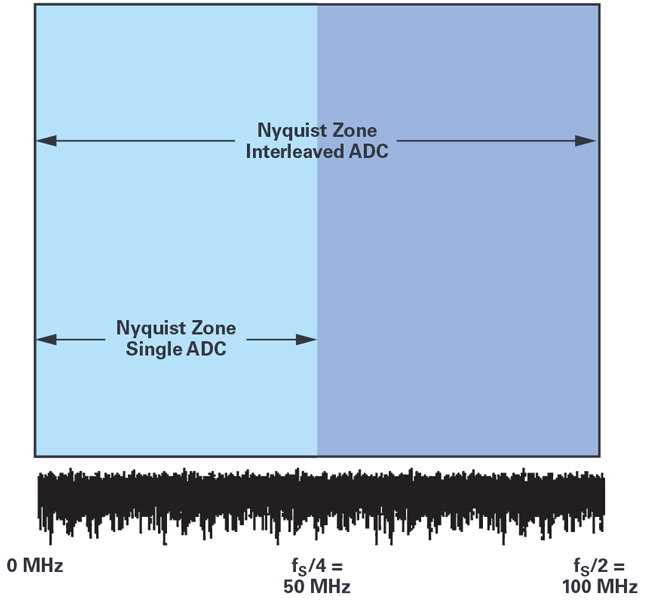 As cellular standards increase channel bandwidth and the number of operating bands, there are greater demands on the available bandwidth in the ADC. In addition, for military applications, the requirements for better spatial recognition, as well as increased channel bandwidths in backend communications, require higher bandwidths from the ADC.

Due to demands for more bandwidth in these areas, accurate measurement of these signals becomes even more crucial. Thus, measurement equipment requires higher bandwidths to properly acquire and measure these higher-bandwidth signals. The system requirements in many designs inherently stay ahead of commercial ADC technology. Interleaving makes it possible to close some of this gap.

The increased sample rate provides more bandwidth for these applications, but also allows for easier frequency planning and reduces the complexity and cost of the antialiasing filter that’s typically used at ADC inputs. With all of these benefits, one has to wonder “What the price do I have to pay?” Though interleaved ADCs offer increased bandwidth and other nice benefits, some challenges also enter the picture in such an implementation.

One thing to look out for when interleaving ADCs concerns spurs that appear in the output spectrum, which result from the imperfections associated with interleaving ADCs. These imperfections are basically mismatches between the two ADCs that are being interleaved. Four basic mismatches result in spurs in the output spectrum: offset mismatch, gain mismatch, timing mismatch, and bandwidth mismatch.

Figure 4 presents an example of how each ADC has its own dc offset and how the interleaved output will effectively switch back and forth between these two dc offset values. The output switches between these offset values at a rate of fs/2, which will result in a spur in the output spectrum located at fS/2. Because the mismatch itself doesn’t have a frequency component and is only at dc, the frequency of the spur that appears in the output spectrum only depends on the sampling frequency and will always appear at a frequency of fs/2. 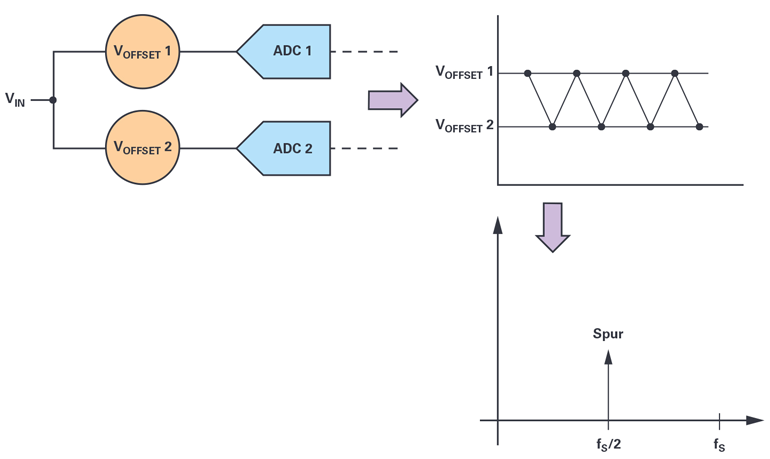 4. Offset mismatch: When the two ADCs are interleaved and samples are acquired alternatively back and forth between them, it changes the dc offset of each successive sample.

The magnitude of the spur depends on the magnitude of the offset mismatch between the ADCs. The greater the mismatch, the larger the spur. To minimize the spur caused by the offset mismatch, it’s not necessary to completely null the dc offset in each ADC. Doing this would filter out any dc content in the signal. Furthermore, it wouldn’t work for systems using a zero IF (ZIF) architecture where the signal content is real and complex and includes data at dc. 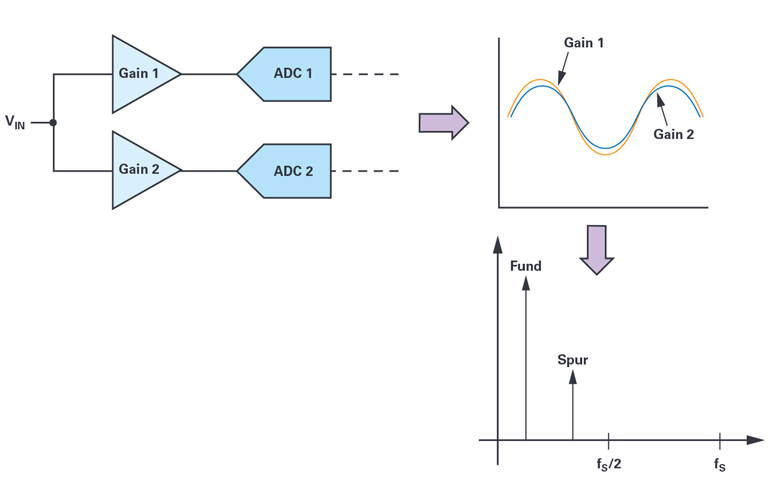 5. A gain mismatch in interleaved ADCs involves a frequency component.

To minimize the spur caused by the gain mismatch, a strategy similar to that used for the offset mismatch is employed. The gain of one of the ADCs is chosen as the reference, and the gain of the other ADC is set to match that gain value as closely as possible. The better the gain values of each ADC are matched to each other, the less the resulting spur will be in the output spectrum.

The timing mismatch between the two ADCs has two components: group delay in the analog section of the ADC and clock skew. The analog circuitry within the ADC has an associated group delay, and the value can be different between the two ADCs. In addition, clock skew has an aperture uncertainty component in each of the ADCs as well as a component related to the accuracy of the clock phases that are input to each converter. Figure 6 shows the mechanism and effects of the timing mismatches in the ADCs. Similar to the gain mismatch spur, the timing mismatch spur is also a function of the input frequency and the sample rate and appears at fs/2 ± fIN. 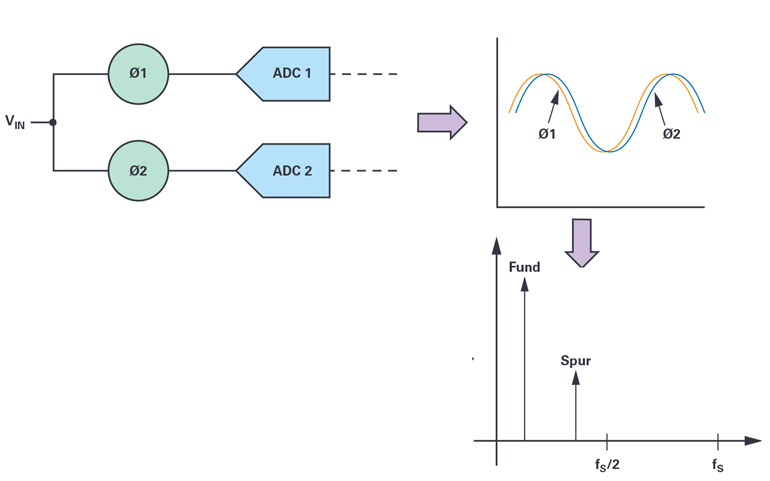 6. Timing mismatch between two ADCs involves two components: group delay in the analog section of the ADC and clock skew.

To minimize the resulting spur, the group delay through the analog section of each converter needs to be properly matched with good circuit design techniques. In addition, the clock path designs need to be closely matched to minimize aperture uncertainty differences. Lastly, the clock-phase relationships must be precisely controlled such that the two input clocks are as close to 180° apart as possible. As with the other mismatches, the goal is to attempt to minimize the mechanisms causing the timing mismatch. 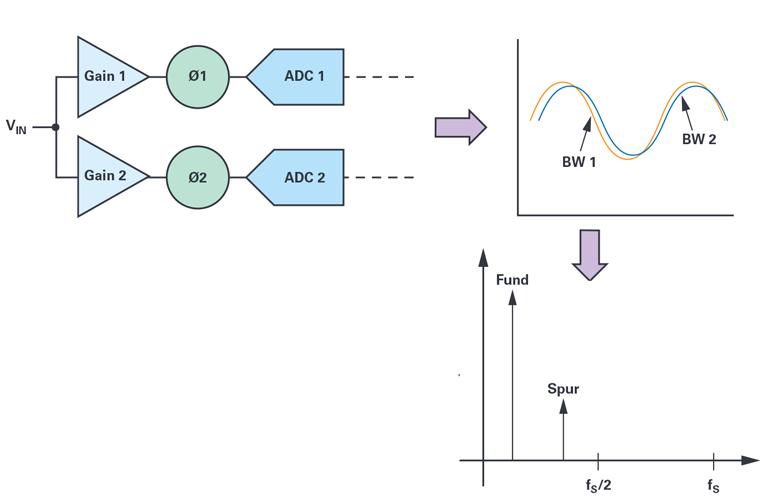 7. Bandwidth mismatch has a gain and a phase/frequency component, which makes this mismatch more difficult to contend with.

After discussing the four different mismatches that cause issues when interleaving ADCs, a commonality between them emerges. Three of the four mismatches produce a spur in the output spectrum at fs/2 ± fIN. The offset mismatch spur can be easily identified, since it alone resides at fs/2 and can be compensated fairly easily. The gain, timing, and bandwidth mismatches all produce a spur at fs/2 ± fIN in the output spectrum, so the question becomes how to identify the contribution of each. Figure 8 gives a quick visual guide to the process of identifying the sources of the spurs from the different mismatches of interleaved ADCs. 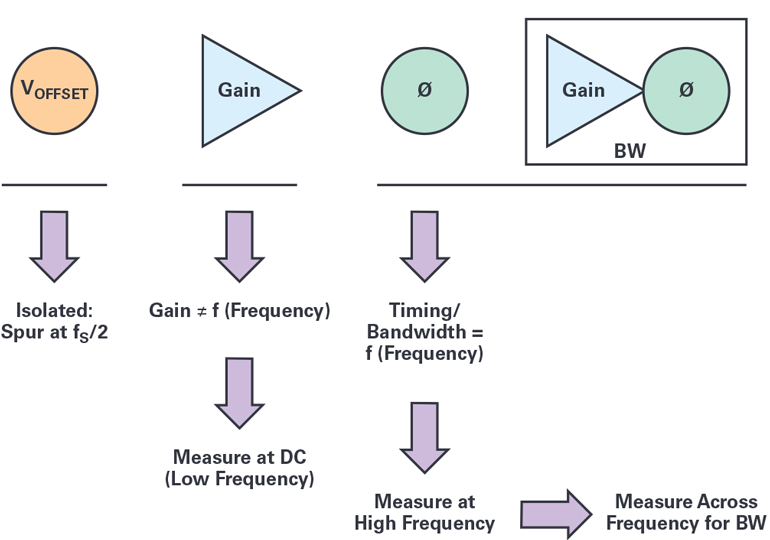 The newest communication system designs, cutting-edge radar technologies, and ultra-high-bandwidth measurement equipment seem to constantly outpace the available ADC technology. Their requirements push both users and manufacturers of ADCs to develop methods to keep pace with these demands. Interleaving ADCs allow for greater bandwidths to be achieved at a faster pace than the traditional path of increasing the conversion rate of a typical ADC. Taking two or more ADCs and interleaving them together increases the available bandwidth, and system design requirements can be met at a faster pace.

Interleaving ADCs does have its challenges, though, and mismatches between the ADCs can’t be ignored. Even though the mismatches do exist, understanding them and how to appropriately deal with them equips designers with the ability to meet the ever-increasing demands of their latest system designs.

Jonathan Harris is a Product Applications Engineer in the high speed converter group at Analog Devices.