TCXO Stability is More than Just a Number

The main datasheet specification of a temperature-compensated oscillator (TCXO) is its frequency-over-temperature stability, expressed in parts/million (ppm) or parts/billion (ppb). But this specification isn’t enough on its own to predict the TCXO’s performance and reliability in a real-life system.

In practice, different stability specifications in a TCXO datasheet account for the many factors that contribute to stability. Therefore, TCXO stability is more than just a single number for a given system. This article provides a comprehensive list of contributing factors impacting TCXO stability that should be accounted for when evaluating a system’s overall stability.

Changes in a system’s temperature environment create corresponding changes in an oscillator’s output frequency, referred to as frequency-over-temperature stability. A TCXO employs temperature-compensation circuitry to reduce this contribution to ±100 or even ±50 ppb across temperature.

At such low levels, other noise sources in the application can become significant. For example, acceleration, vibration, supply noise, load changes, airflow, thermal gradients, and high temperatures can impact the system’s overall stability much more than is predicted by the TCXO’s frequency-over-temperature specification. Separate specs of stability for each of these contributing system factors enables designers to add their contributions for a given system to better predict overall stability. Thus, TCXO stability isn’t just a single number, but rather a list of contributing attributes.

Depending on the application, one or more of the following attributes may be more important than the TCXO’s widely publicized frequency-over-temperature stability number.

Thermal hysteresis is the maximum difference between two measurements: the frequency as temperature is adjusted from the bottom of the specified temperature range to the top, and the frequency as the temperature is adjusted from the top of the specified temperature range back down to the bottom. When plotted, the two curves form the shape of an eye. The maximum vertical difference between the two curves (or the tallest part of the “eye”) is usually specified. The realized stability can’t be made smaller than its hysteresis, making hysteresis a limiting factor for overall TCXO stability.

Frequency-over-temperature slope describes how the output frequency changes due to fluctuations in temperature. It’s also referred to as frequency-versus-temperature slope, abbreviated as dF/dT, and is specified in units of ppb/°C. Typically, temperature ramp rates are 0.5°C/min or 1°C/min, although they can be as high as 5°C/min for systems deployed in harsh environments.

1. A comparison of dF/dT performance for MEMS vs. quartz TCXOs shows no correlation with the devices’ rated frequency-over-temperature specifications.

Initial tolerance quantifies the accuracy of the device’s initial frequency compared to its target frequency at a given temperature, typically 25 °C, and is specified in units of ppm. Systems requiring high accuracy can minimize initial tolerance by calibrating the TCXO against a more accurate reference during production before shipping to customers. Periodic calibration may be necessary to account for aging that causes the system to fall out of specification.

Aging quantifies how the output frequency changes over time when external factors (such as ambient temperature and supply voltage) are held constant. This specification is typically specified for one day, one year, 10 years, and 20 years.

Voltage sensitivity describes how oscillator output frequency changes with the oscillator’s power-supply voltage. For this reason, it’s better to use regulated power supplies to minimize supply voltage variations. Integrating such regulation in a TCXO package eliminates the need for dedicated external regulation, potentially saving valuable space in the system.

Table 1 compares the stability numbers of quartz TCXOs and SiTime’s SiT5356 MEMS Super-TCXO. Note that while microelectromechanical (MEMS) TCXOs are based on MEMS resonators, they use the same TCXO nomenclature to simplify product selection. 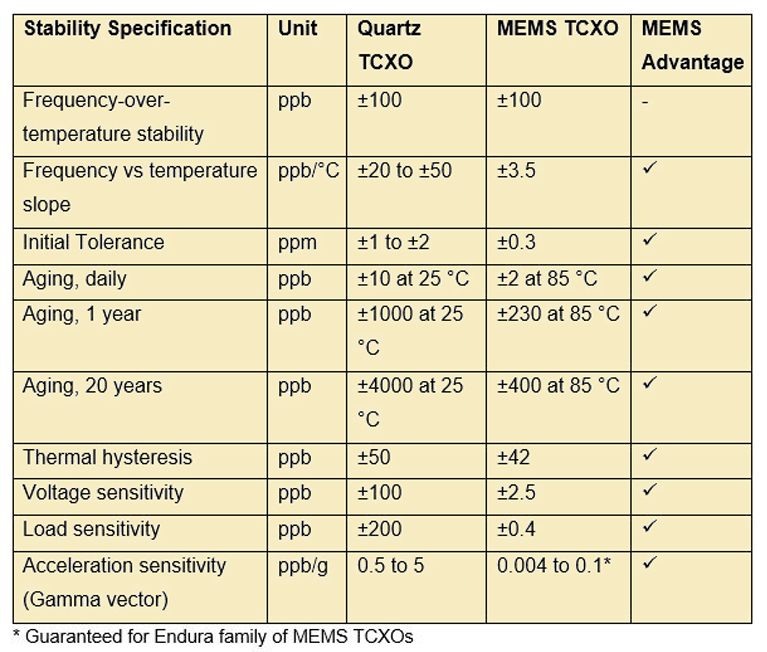 A comparison of stability specifications for quartz versus MEMS TCXOs.

Although both quartz and MEMS TCXOs have equal banner specifications for frequency-over-temperature stability, selecting a device based only on this value can lead to wildly different results for overall system stability. For example, exposing an outdoor 5G radio to a sudden rain shower can drop its internal ambient temperature 10°C, which can degrade the output frequency for quartz TCXOs between ±200 and ±500 ppb compared to just ±35 ppb for MEMS devices.

In addition, aging will cause the quartz device’s frequency to shift significantly more than that of MEMS devices. For each aging specification—daily, yearly, and 20 years—a quartz device’s frequency shift can be much worse than predicted in the table. That’s because the quartz TCXO’s aging is usually quoted at room temperature in their datasheet, compared to 85°C for the SiT5356 MEMS Super-TCXOs. Excessive heat increases aging in quartz resonators much more than in MEMS resonators.

Alternatively, subjecting a radio mounted on an outdoor pole to 1 g of shock from wind-induced vibration can shift the frequency of internal quartz devices by ±0.5 to ±5 ppb, compared to ±0.004 to ±0.1 ppb for MEMS devices. Furthermore, because quartz is a piezoelectric device, mechanical vibration can significantly degrade its phase-noise performance, whereas MEMS devices, such as the SiT5356, are electrostatic-based and therefore resistant to degradation (Fig. 2). 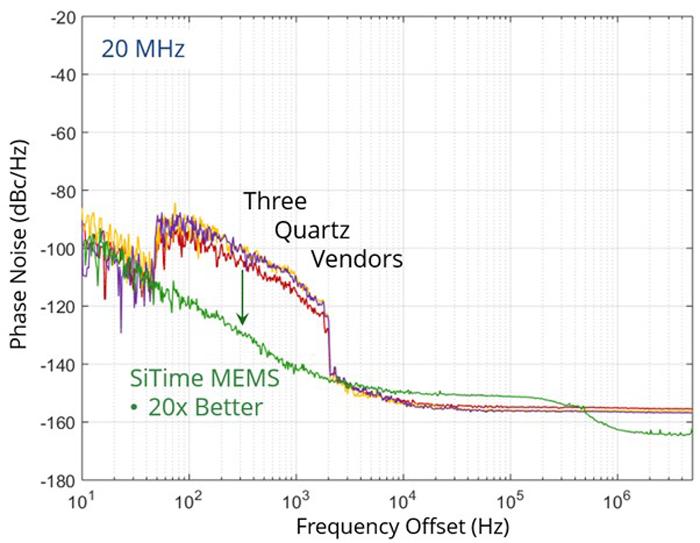 2. Shown is a comparison of phase noise under vibration for MEMS versus quartz TCXOs, measured per MIL-STD-883F Method 2026 using 7.5-g rms total vibration intensity from 50 Hz to 2 kHz.

For a thorough consideration of factors that can influence TCXO stability and therefore overall system performance, designers should look beyond the banner specification of frequency-over-temperature stability and drill down to other relevant system attributes contributing to TCXO instability. These include frequency-over-temperature slope, initial tolerance, aging, hysteresis, voltage, and load sensitivities, as well as acceleration. Only then can a comprehensive understanding of the device’s performance under all conditions be accurately evaluated for the system.