The tour through DragonSpeed Racing’s shop was lots of fun and informative as well. We’ve covered the Indy 500 and racing technology, in addition to automotive technology in general, since the inception of Electronic Design. Much has changed over the years and we will be highlighting the latest technology here (Fig. 1).

1. In 2009, the steering wheel had a display with LEDs (top left). The latest version has more buttons and switches along with an LCD display.

I got quite an education on how IndyCar runs these days and was able to check out the pieces to be assembled into DragonSpeed’s IndyCar entry. One aspect I wasn’t aware of is that the engines are managed by the engine companies, Chevrolet and Honda. This includes the ability to start the engines. A company representative is on hand whenever the engine is run, and will often take or disable the engine control unit (ECU) so that the car can’t be run without supervision.

The current 2.2-liter engines are capable of approximately 700 hp. In 2021, the series will move to a larger, 2.4-liter, 900-hp engine. Typically, a single engine is used for only around 2500 miles. At that point, it’s replaced (or sooner if the specs shift too far from a very strict range). This is to make sure that all of the teams have the same capabilities when it comes to engines, in addition to a number of other standardized items on the car.

The standardization puts more onus on the teams and drivers. Features like “push-to-pass” gives a fixed amount of extra turbocharger boost for about 10 seconds. The extra 40 hp is designed to be used in passing, but it can also be employed for defense.

The boost can be used a limited number of times, making it a more strategic tool. The rules have been changed so that the information reported in real time will not be available to the teams until each lap is finished. A team could, of course, see a visual change in a competitor’s car performance, but that’s different from the instantaneous report that may be available. Likewise, the video you see on TV or a smartphone is delayed.

The engine wasn’t actually in the shop when I came to visit. In fact, all I got to see what the cockpit (Fig. 2), which is primarily made from graphite composites. A new windscreen has been mandated for the 2020 series—I’ll be taking a closer look at that later at Sebring. 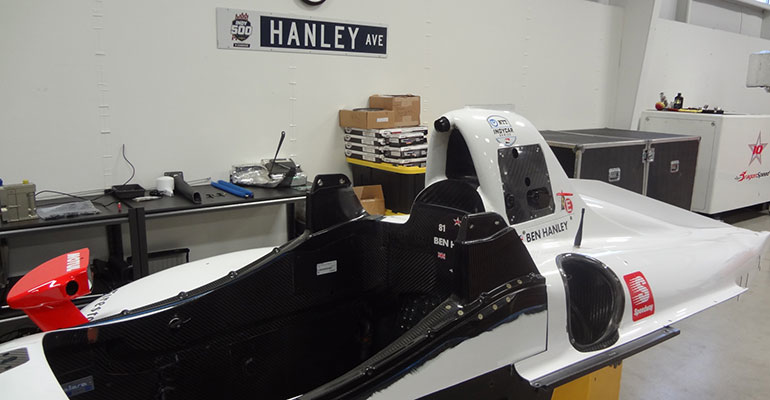 2. The cockpit and most of the IndyCar exterior portions consist of strong, lightweight graphite composites.

One other thing I learned is that the windscreens don’t have windshield wipers. The teams typically paste a stack of clear plastic sheets on the front and tear them off one at a time when the car pits. The sheets are normally pitted by debris kicked up by the other cars.

One area I will be covering in future articles is car safety. A safety feature that most race viewers don’t see are yellow cables used throughout the car (Fig. 3). The mandatory cables are threaded through components like movable arms that could be thrown from the car in an accident. Many a driver has been injured or killed when this happens. They’re anchored on large items like the engine and frame. 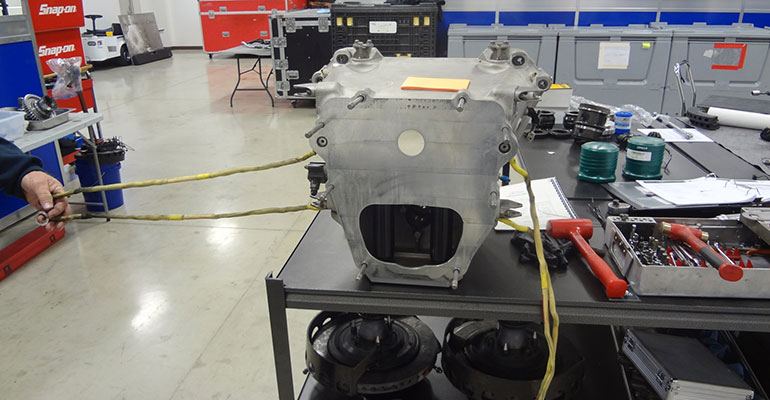 3. The yellow cables are a safety feature used throughout the car. They consist of two cables internally with the yellow cover. They’re designed to keep other components from flying off the car when an accident occurs.

The cables—a pair of internal cables plus the protective cover—are designed to keep other components from flying off the car when there’s an accident. Two internal cables are used so that if one breaks, then the other acts as a backup. The colors indicate when the cables are to be used, identifying the expired cables that need to be replaced.

I’m off to Sebring to see the latest test of the assembled car, so check out our DragonSpeed site for more details—and the future opportunity to win a ticket to the Indy 500.