Broadcom is selling the remnants of its wireless Internet of Things business to Synaptics. Synaptics said it has agreed to pay $250 million to buy out Broadcom’s WiFi, Bluetooth, GPS and other IoT-focused wireless assets, in its latest bid to beat out competitors to control the electronics crammed inside the next generation of smart consumer devices in the home.

Under the terms of the deal, Synaptics said it would pay for the rights to Broadcom’s WiFi, Bluetooth and GPS products aimed at consumer Internet of Things devices, ranging from thermostats that programs itself based on how users change the temperature to smart speakers that can understand simple, verbal commands from users. The deal also gives it rights to new generations of wireless IoT chips currently in development at Broadcom.

Broadcom is a leading supplier of WiFi and Bluetooth chips for use in smartphones ranging from Apple’s iPhone to Samsung’s Galaxy devices, and it is holding onto that business unit. Around 60 employees from Broadcom’s engineering division are also part of the deal, which is expected to close by the first quarter of 2021.

The assets Synaptics is buying include IoT-focused IP for WiFi 4, WiFi 5 and WiFi 6 as well as Bluetooth 5.1, Bluetooth 5.2, BLE and GPS L5 and GNSS. Once the all-cash deal closes, the new business will add around $65 million to Synaptics’ annual sales. The agreement has been approved by the company’s board of directors.

Synaptics is a leading seller of display drivers and touch controllers for use in a range of devices from phones to PCs. It also sells chips that allow users to unlock smartphones by touching the fingerprint sensor under the touch screen instead of a physical button, giving it a dominant position in high-end smartphones. But in recent years, it has been trying to diversify its product portfolio and roll out new combinations of chips for consumer devices.

In 2017, Synaptics shelled out about $300 million to buy Conexant Systems to push into the consumer IoT. It is using Conexant’s voice technology to make chips that can discern voices from long distances and over loud noises and can be programmed to wake voice assistants like Amazon’s Alexa upon hearing a keyword. It also agreed to buy Marvell’s video and audio processing unit, which sold chips for set-top boxes and gaming consoles, for $125 million.

The Broadcom deal gives it the ability to supply more of the chips crammed in consumer IoT devices, from display drivers and touch controllers to video and audio processing ICs. It could also supply WiFi, Bluetooth and GPS products as integrated solutions to customers buying its other components. The deal, which will add $65 million to its annual sales, should expand the addressable market for its product portfolio by more than $5 billion by 2023.

Shares of Synaptics have surged more than 13% since it announced the deal on Tuesday.

Last year, Broadcom was reportedly readying to sell its wireless semiconductor business, which designs and develops Bluetooth, WiFi and GPS products and radio frequency ICs that clarify cellular signals used by smartphones and other consumer electronics. But it chose not to offload the business after it hammered out supply deals worth billions of dollars with Apple, giving its wireless ICs guaranteed slots in new 5G smartphones, including the iPhone.

The deal also signals that WiFi and Bluetooth chips have now become a linchpin for the consumer IoT market and a battleground for the semiconductor industry. NXP agreed last year to buy out Marvell’s WiFi and Bluetooth business, which has rolled out chips used in Apple’s iPod, Microsoft’s Surface, Google’s Home and other iconic consumer devices, for $1.75 billion. NXP said sales from the assets could more than double to $600 million by 2022. 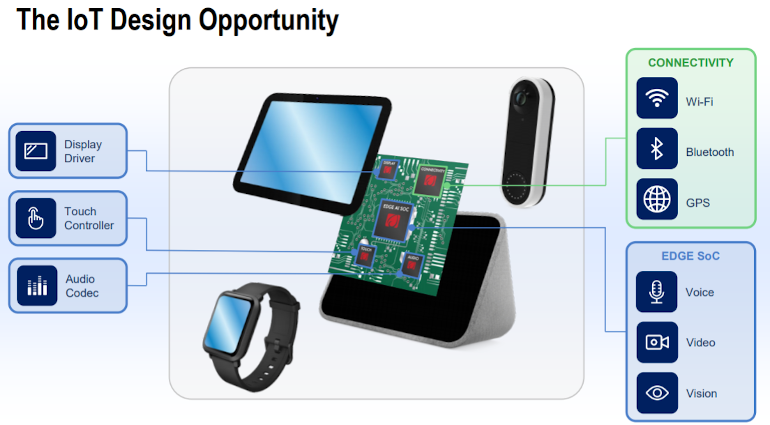 Qualcomm, the world’s largest vendor of chips used in smartphones, is also wading into the battleground. The San Diego, California-based company recently rolled out its latest line of integrated WiFi and Bluetooth chips for the digital dashboards and center consoles of cars.

Infineon, one of the world’s largest manufacturers of chips used in cars, also agreed last year to buy out Cypress Semiconductor, which also sells WiFi and Bluetooth products for Internet of Things devices in cars, on factory floors and in homes, for around $10.1 billion. Cypress said 75% of the $2 billion market for IoT wireless solutions last year would be based on WiFi and Bluetooth.

But as rivals have been burning through billions of dollars to enter the business, Broadcom has been trying to get out. The company divested another part of its wireless IoT business, with 450 employees, to Cypress for $550 million in 2016. As part of the deal, Broadcom retained the ability develop Wi-Fi, Bluetooth and other wireless chips to support customers in the consumer electronics space.

“Expanding our offering in the high growth IoT market has been one of the major focus areas for Synaptics and the addition of best-in-class wireless connectivity technology to our portfolio significantly enhances our overall position,” Michael Hurlston, the chief executive of Synaptics, said in a statement. Before he was hired by Synaptics in 2019, Hurlston served for more than a decade as the head of Broadcom’s mobile wireless chip business.