It’s always been a challenge to generate terahertz (THz) waves, the span of electromagnetic spectrum between millimeter and optical wavelengths and generally defined as wavelengths from 1 to 0.1 mm or 300 to 3,000 GHz. While there are vacuum-tube and solid-state devices and assemblies that can do so, these bring many challenges and limitations.

Now, a team at MIT in close collaboration with one at nearby Harvard University has developed a laser-pumped, gas-based THz source that can be fine-tuned over 37 lines spanning 0.251 to 0.955 THz. Each line features kilohertz linewidths and power greater than 1 mW.

The underlying physics is obviously extremely sophisticated, based on what’s called rotational population inversions that are optically pumped by a quantum cascade laser (QCL). Also fascinating is that the gas they used for a variety of reasons was nitrous oxide, better known as laughing gas.

Their implementation overcame some previously assumed theoretical limitations about cavity size as well as molecular interaction and collision. This analysis led to the development of a new mathematical theory to describe the behavior of a gas in a molecular gas laser cavity. Their new model tracked thousands of relevant vibrational and rotational states among millions of groups of molecules within a single cavity. New numerical analysis and computational techniques were used to reduce the large problem and make it solvable on a laptop computer. It then analyzed how those molecules would react to incoming infrared light, depending on their position and direction within the cavity.

The entire project utilized off-the-shelf standard electro-optical components, including a custom-built tunable QCL (also constructed from standard parts) developed by the Harvard group. This QCL provided the power that the MIT group’s theory predicted would be needed to properly excite a resonant cavity the size of a pen (a conventional cavity is about 1000× larger). The researchers then looked through libraries of gases to identify those that were known to rotate in a certain way in response to infrared light and selected nitrous oxide.

Although the principles, design, and implementation are extremely advanced, a few figures summarize the situation. In the arrangement (Fig. 1), IR light from a widely tunable QCL is tuned to pump a “rotational (ro)-vibrational” transition and create a rotational population inversion. Light from the QCL is deflected by a 90%-10% beam splitter (BS) and transmitted through a gas cell. Therefore, the QCL may be tuned into coincidence with the vibrational transition by minimizing the transmitted intensity measured using a photodiode (PD).

1. Although complicated and sophisticated, the experimental arrangement at MIT was built with standard parts and used a tunable quantum cascade laser custom built at Harvard. (Source: MIT)

The radiation emitted from the pinhole of the QPML is collected with the off-axis parabolic mirror (OAP), focused through a Teflon lens, and measured by a power meter, a detector, or a receiver that uses a frequency-multiplied local oscillator (LO) mixed with the signal to produce the intermediate frequency (IF) measured by a spectrum analyzer. The pump power from the QCL is varied with a wire grid polarizer on a calcium fluoride substrate. The laser cavity is tuned into resonance with the lasing frequency by moving a copper mirror on a translation stage. Figure 2 shows the construction and tunability, and Figure 3 shows the tuning range.

2. Shown is a photograph of the experimental setup depicting the different components of the laser cavity, the path of the QCL beam (red), and how the output light (blue) is collected (A); and a plot of the measured relative emission frequency of the THz gas laser as a function of the back-mirror position for JL= 10, (νTHz ≈ 0.299 THz) (B). (Source: MIT) 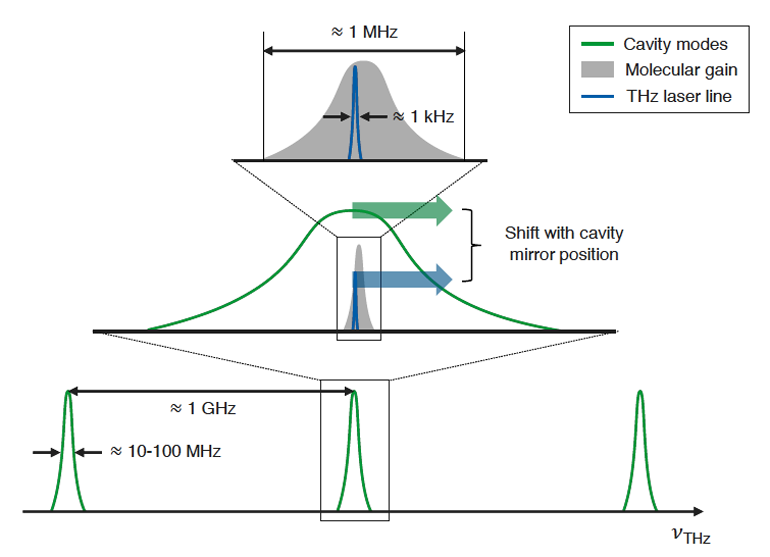 3. The schematic reveals the tuning range of the THz laser for a given pumped transition. As the back-mirror of the gas cavity is translated, the free spectral range of the resonator is modified, resulting in a shift of the cavity modes. This, in turn, causes the emission frequency of the laser to shift within the frequency range of the molecular gain profile. (Source: MIT)

Full details are in their paper with a deceptively short and simple title “Widely tunable compact terahertz gas lasers” published in AAAS Science; an unlocked version along with extensive Supplementary Materials is posted here. (Note that although the paper’s authors use the word “simple” quite often for both the theoretical underpinnings and the physical implementation, none of it is that way at all). The research was supported in part by the U.S. Army Research Office and the National Science Foundation.

Going beyond the THz part of the spectrum, researchers at the Universidad Nacional Autónoma de México (Mexico City, Mexico) have accurately measured the X-ray spectrum that results from peeling of standard adhesive tape. It occurs due to the triboluminescence effect, a mechanical process that involves rubbing, breaking, peeling, or deforming a material. While this strange effect and X-ray “source” has been known for decades, the emissions are very brief and accurate measurements were obscured due to “pileup.” This is when the multiple x-ray pulses overlap in time, and so appear as if they were a single pulse but with greater energy. 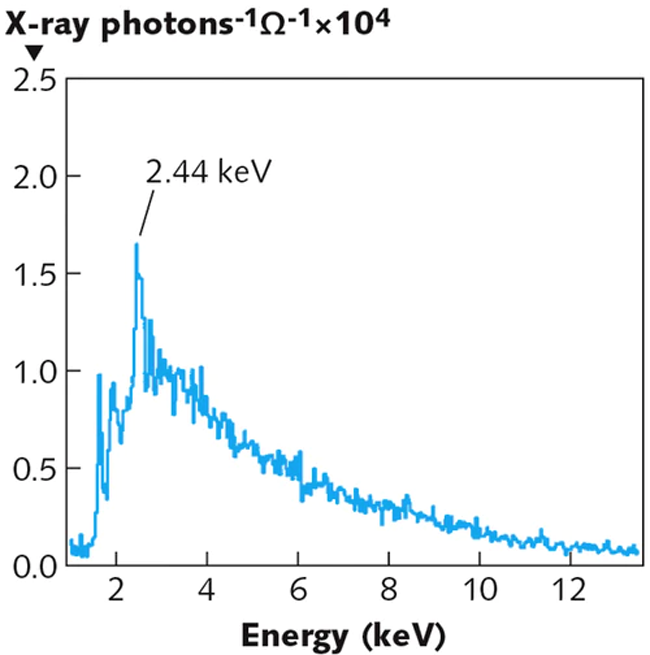 4. The plot shows energy versus number of X-ray photons observed for the triboluminescence effect when peeling adhesive tape. The solid angle Ω subtended by the detector was just 5 × 10-6 (Ω is defined as Ω = A/r2, where A is the exposed area of the detector’s window and r is the distance to the source). (Source: Universidad Nacional Autónoma de México via “Laser Focus World”)

Using an innovative solid-state detector and observation arrangement in a partial vacuum chamber setup, they found maximum individual photon energy to be 30 keV (about half of that in previous studies) with an overall peak at 2.44 keV (Fig. 4), which is about half of that reported in previous studies. Average power of the radiation source was 18.5 nW.  Details are in their paper “The true spectrum of tribo-generated X-rays from peeling tape,” published in Applied Physics Letters. Just don’t scare people by telling them, however accurate it may be, that even using cellophane (such as “Scotch”) tape will generate X-rays!