The great thing about solid electrolytes is that they allow for the integration of different active materials (such as a lithium metal anode) and cell architectures (such as bipolar arrangements), making for a higher energy density at cell and/or battery-pack level. In parallel with these all-solid-state batteries, developments such as “smart” battery cells with sensors will increase the amount of usable energy in the battery pack even further.

Today’s Li-Ion Battery Cells are Running Out of Steam

For electric cars to really take off, they ideally should match—or even exceed—the driving range of vehicles with an internal combustion engine. The key to achieving this lies in the battery itself, more specifically in the use of solid-state battery-cell technology.

At the heart of today’s EVs are lithium-ion battery (LiB) cells that contain liquid electrolytes. The best-in-class of these “wet” LiB cells have an energy density of around 700 watt-hours per liter (Wh/l), accommodating a maximum driving range of about 500 km. Yet, their energy density is expected to stagnate at around 800 Wh/l due to the characteristics of their active materials (Fig. 1).

1. The energy density of the Li-ion battery (LiB) cell has more than tripled since its market introduction by Sony in 1991. Continuous improvements in LiB components with LiCoO2-graphite chemistry resulted in an average increase of 25 Wh/l per year from 1995 to 2010. Introduction of new active cathode materials, such as the NiCoAl-based and NiMnCo-based lithium-metal oxides (NCA and NMC), and the gradual addition of silicon to the graphite anode, have maintained the energy density increase ever since. However, it’s expected that with the materials known today, we will reach a practical limit for wet LiBs around 800 Wh/l. Solid-state battery technology will be needed to break through this barrier and achieve an energy density of 1000 Wh/l—and more.

A higher energy density can be expected from solid-state batteries, which contain a solid electrolyte instead of a liquid one. In combination with new battery-pack and battery-module developments, the autonomy of electric cars could significantly be extended.

Today, the maximum driving range of an electric vehicle is determined by the amount of energy that’s contained in the individual LiB cells of the car’s battery pack. Cells are connected in parallel and series arrangements to provide the high currents and high voltage needed to power the electric engine.

Battery-cell roadmaps foresee that cells of 1000 Wh/l should become available in 2030—in the form of solid-state lithium-metal batteries. We will come back to the potential of those solid-state batteries, but let’s first discuss an alternative approach to increase the amount of energy that can be squeezed out of an electric car’s battery pack—an approach leveraging so-called “smart” battery cells.

Enlarging the energy density at cell level is one prerequisite to increasing the driving range of the electric car. But, next to the many individual cells in large battery packs, a car battery module also contains electronics and sensors to manage that battery’s usage. For example, to ensure a long (enough) lifetime, the battery management system (or BMS) will typically only use part of the cells’ energy to avoid damage to the cell chemistry.

In other words, the energy that can actually be used by an electric car for driving might only be 60-80% of the overall battery’s capacity (depending on the type of electric car).

Improving the battery’s energy management can be another factor to enhancing the electric vehicles’ driving range. This could be realized by using “smart” battery cells, with micro-sensors built into the cell to better monitor its state of charge and state of health.

At EnergyVille—an association of the Flemish research institutes KU Leuven, VITO, imec, and UHasselt in the field of sustainable energy and intelligent energy systems—research into smart battery cells with multi-array sensors and integrated electronics for communication with the BMS is currently under way.

Why, then, develop solid-state batteries at all, you may ask? Well, for one, solid-state batteries allow for different, more compact arrangements in the battery pack. They can be built in bipolar arrangements providing higher voltages at cell level. This, in turn, simplifies connecting the cells and creates extra space in the battery pack to include more cells.

Solid-state LiBs will also be more intrinsically safe. Thus, less safety monitoring electronics are needed in the periphery of the battery module. Finally, solid-state batteries can have a larger voltage window than wet LiBs, which means that the risk of damaging the cell during charge and discharge is reduced and a larger part of the cell energy becomes available for use.

The first electric cars equipped with these first-generation solid-state batteries are expected to launch somewhere in the middle of this decade.

In Pursuit of the Holy Grail: Solid-State Lithium-Metal Batteries

The benefit lies in the fact that some solid electrolytes can provide a larger electrochemical window. In other words, they remain stable also at very high voltages (where current liquid electrolytes do not). This means that higher-voltage cathode materials can be used than those employed in 3.6- to 3.8-V LiBs today, and a higher cell voltage leads to an increase in cell energy, provided the lithium-ion capacity remains the same.

For example, LiMn1.5Ni0.5O2, or LMNO, has an electrode potential of 4.7 V and can’t be used with liquid electrolytes that react at these high voltages. Solid electrolytes such as lithium lanthanum zirconium oxide (LLZO), however, are stable up to 5 V and are thus compatible with these high-voltage cathodes. As such, solid-state LiBs can break the 800-Wh/l barrier.

The real game-changer is the use of metallic lithium as an anode. Lithium metal has the highest energy density as active anode material and provides the highest cell voltage from the anode contribution in the cell. To reach the much desired 1000-Wh/l energy density—and to even go beyond—all-solid-state lithium-metal battery (LMB) cells are therefore targeted.

So far, the use of lithium metal didn’t work because charging of the battery leads to the formation of lithium-metal needles (or dendrites). These short the battery internally, resulting in thermal runaway and explosions. It was Dr. Akira Yoshino (Fig. 2), one of last year’s Nobel prize winners in chemistry, who came up with graphite as a safe solution, enabling the commercialization of the current wet LiBs in the early 1990s. 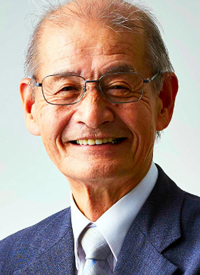 2. Dr. Akira Yoshino was awarded the Nobel Prize in chemistry in 2019. (Source: Wikipedia)

Inserting lithium-ions in between the layers of graphite was a safe compromise, but it came at the expense of energy density and cell voltage. Several solid-state electrolytes are stable against metallic lithium; thus, the use of thin lithium as an anode becomes a possibility. In fact, lithium-metal batteries with solid polymer electrolytes are already commercially available (Fig. 3).

However, these batteries only operate at temperatures of 70°C and therefore aren’t suitable for an electric family car. The reason for this is lithium-ion conductivity is too low for these solid polymer electrolytes. As a result, for many years, solid-state battery research has focused on finding solid electrolytes with a high-enough ionic conductivity.

Exploring the Options for a Matching Solid Electrolyte

In contrast, imec has developed a nanocomposite electrolyte that’s fabricated from liquid and turned solid once it’s inside the cell (Fig. 4). This makes the material compatible with current lithium-ion cell-fabrication processes, and thus potentially low cost. 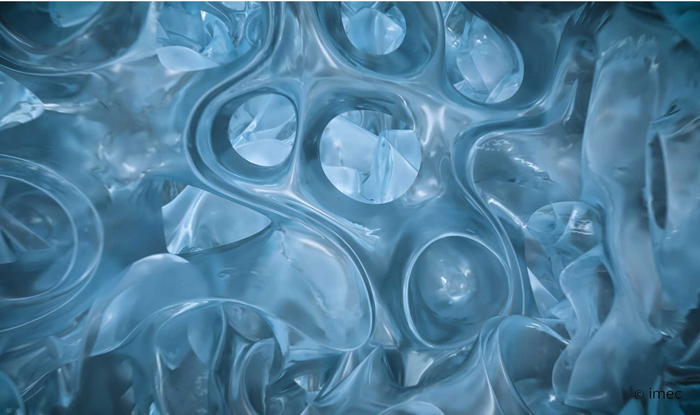 4. Imec’s solid-state electrolyte is a new material for use in making next-generation LiBs for electric vehicles (artist impression). (Source: imec)

Now that several options are available, solid-state battery research has shifted its focus toward the assembly of the cells and the integration of all components into a functional cell. One issue is the reactivity of the materials forming resistive or blocking layers between the functional components, severely inhibiting the cell’s operation. Special thin-film coating (or so-called “artificial interphase coatings”) are being developed to prevent these reactions from happening.

At EnergyVille, upscale and cost-effective methods are developed for the deposition of these sub-nanometer thin coatings inside the thick battery electrodes. These nanoscale coatings will be instrumental not only for the solid-state lithium-metal batteries under development, but also for the extendibility of LiBs with a liquid electrolyte. Indeed, much of the solid electrolyte know-how can be applied to wet LiBs as well.

Who knows, the solution may lie in a hybrid approach after all.