As industrial processes become automated, wireless and cloud-connected, sensors serve as the backbone in providing the feedback on assets necessary for remote monitoring and control. The accuracy and reliability of sensors are critical to process control systems by ensuring optimum results and ongoing performance. While different sensor technologies are available on the market to perform the same measurement, their principles of operation differ. As a result, some perform tasks better in certain applications than others.

In position measurement, the Linear Variable Differential Transformer (LVDT) has stood the test of time as the ideal sensor technology in industrial automation processes, and even in next-generation IoT applications. Sensitive to minute position changes, the LVDT offers highly accurate feedback on product movement, essential for the optimal performance of many of today’s automated processes.

What is an LVDT?

Linear Variable Differential Transformers are displacement sensors that convert the linear position or motion of a measured object to a proportional electrical output. That voltage is scaled for use in a local readout or a programmable logic controller (PLC) that supports a more automated process control.

These displacement sensors are sensitive enough to measure movements as small as a few millionths of an inch and total measuring ranges up to ±10 in. (±02.54 mm), or more in some cases. Depending on construction, operating temperatures range from a low of −238°F (−150°C) to as high as 1,000°F (537°C). Their accuracy, reliability and long-term performance make LVDTs stand out from other linear position technology.

In construction, an LVDT has two basic components:

In operation, the single primary coil in the center of the housing gets energized with an AC signal. Magnetically coupled by the core, a voltage is induced in each of two symmetrical secondary windings connected in a series-opposing circuit. The effective voltage and LVDT output is the difference between each secondary.

1. As the LVDT core moves, it engages with the secondary winding and disengages from the opposite winding. The difference between S1 and S2 gives an electrical signal proportional to the core position.

Being an inductive transformer, the LVDT requires an AC excitation voltage across the primary and produces an AC output across the secondaries. Support electronics and signal conditioners demodulate the low-amplitude AC output and produce a DC voltage, current or digital output for use by most industrial meters and control systems. In modern LVDTs, excitation signal requirements are around 3 Vrms and frequencies range from 1 kHz to 10 kHz. As alluded to earlier, without any internal electronics, AC-operated LVDTs can handle extreme temperatures from as low as −238°F (−150°C) to as high as 1,000°F (537°C). AC-Operated LVDTs also are packaged in smaller sizes to fit into the hard-to-reach installation.

DC-operated LVDTs incorporate electronics so signal conditioners are built right into them for easy and fast installation. These LVDTs provide DC output corresponding to the core position directly compatible with computer-based systems. As a result, DC versions of the LVDT are more popularly used in a wider variety of quality control, inspection equipment and industrial metrology applications.

With no physical contact between the housing and the core, there is no source of friction during operation (Fig. 2). As a result, LVDT sensors have no rubbing parts, no wear, no error due to stiction and no resistance.

2. Because the low-mass LVDT core can float freely within the housing of the LVDT, no friction exists between the core and the housing that can wear in the sensing element or cause stiction errors with stationary surfaces or resistance that can hinder the very movement one is trying to sense. For example, a small float operating with too much friction will not properly track liquid level or might provide a delayed response. The same is true for a very small actuator that might not generate the necessary force to move the object and core due to unnecessary friction.

With no moving parts and frictionless operation, the LVDT offers near-infinite mechanical life. Once installed, this displacement sensor will offer decades of reliable operation over millions of cycles without the need for replacement. This feature is especially valuable when LVDTs are installed in inaccessible or unattended locations—such as nuclear plants, embedded in structures for strain monitoring or installed in choke valves undersea that depend on continued operation for many thousands of hours—as replacing hardware is expensive and cumbersome, often resulting in extended downtime of operations.

Use in Hostile Environments

Adding a non-magnetic barrier to separate the LVDT coil from its core enables its operation in highly corrosive, pressurized and harsh pressurized environments. In this configuration, the LVDT core is only exposed to media while the housing and coils are separated by a sleeve or tube construction of glass, metal or other non-magnetic materials. This feature is particularly useful in level systems, pumps and valves, especially underwater.

Many industrial processes require precise product placement at high consistency. Immune to drifts, wear, vibration or foreign matter intrusion, and unlike other sensor technology (Fig. 3), LVDTs exhibit excellent repeatability at any point within their range for extremely consistent output at any given position. Reliability is critically important for applications such as structural monitoring and product thickness measurement that require measurement of extreme small movements over many years. 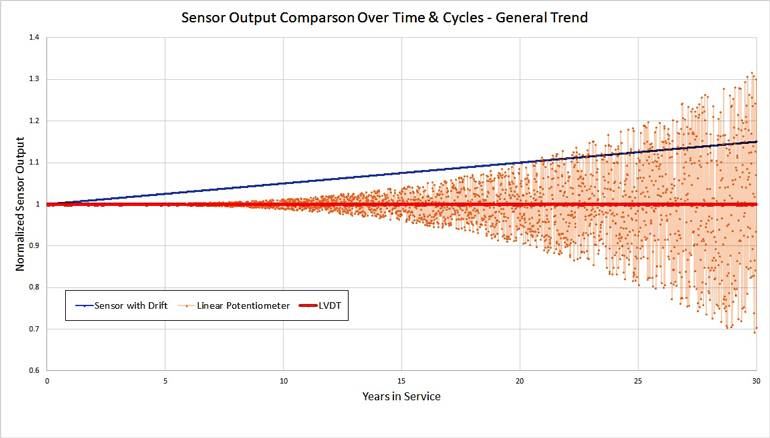 3. While drift causes some position sensors to change output over time and the noise of linear potentiometers increase due to wear and foreign debris entry, LVDTs remain impervious to both to deliver a consistent, repeatable output for their entire service life.

Limited only by their associated electronics, LVDTs can detect extremely small changes in position on the sub-micron level. Their infinite resolution even with the most infinitesimal movement is important in measuring parameters such as dimensional quality, TIR measurements and thermal expansion.

The null point or the center of the LVDT’s electrical range where the output is nearest to zero is extremely repeatable regardless of changing environment. Across temperature shifts and measurement ranges, the LVDT null point never drifts due to temperature variations and constantly serves as a consistent point to base calibrations.

LVDTs also can be constructed from different materials to provide resistance to radiation, high temperatures, salinity and subsea conditions. All of these factors help LVDTs deliver highly accurate and reliable position measurement in applications with extreme conditions where other sensors might fail.

Sensors such as LVDTs are a critical tool in the construction of smart factories and intelligent automation. As the industry moves to the IoT, more systems will rely on sensors to provide the data for the remote monitoring and control of different assets. Thanks to their long life and reliability, LVDTs allow users to monitor position from a distance. Processes that formerly depended on human presence—sometimes in high-risk areas—can now be controlled from a control room or even a smart device using feedback from LVDTs so human operators are not exposed to any unnecessary hazards.

Michael Marciante is an applications engineer for NewTek Sensor Solutions.