To obtain the transfer function of an analog-to-digital converter (ADC), it’s intuitive to feed a ramp signal and observe the ADC output code as shown in Figure 1. But the greater the resolution and precision of the ADC, the more complex it becomes to generate the ramp signal.

1. The transfer function of an ADC can be obtained by giving a ramp signal to the ADC, which is generated by incrementing voltage.

For example, let’s consider an 18-bit, 1-Msample/s ADC, where the transfer function must be measured at 1 LSB/16 = 0.0625 LSB (for hits per code = 16) precision. This means that the ramp signal should be stepped at 0.0625LSB; thus, the resolution of the ramp-signal generator should be 22 bits. However, this is severely limited by the DAC chosen for the ramp generation. And when considering the DAC’s nonlinearity, this doesn’t seem like a practical solution.

On the other hand, sine waves can be easily generated, and their purity can be worked on to meet the ADC’s performance. A sine wave of ~−120-dB total harmonic distortion (THD) contributes to an INL of ~0.26 LSB (4-V reference and 18-bit ADC). Finding an 18-bit DAC with ~0.26 LSB INL is difficult, though. Moreover, the DAC throughput would decide the linearity test time.

Consider a low-frequency sine wave as shown Figure 1. The frequency is so low that most of the time, the ADC consecutively captures the same code. Therefore, it can be said that most of the codes are hit more than once, or hits per code is greater than 1.

As Figure 2 shows, hits for all codes aren’t uniform. At the mid-risings, the slope of the sine wave is higher, so those codes aren’t hit as frequently. At the peaks (top and bottom peaks), the slope of the sine wave is lower, so those codes are more likely to be hit. Consequently, “hits per code” is lesser at the mid-risings and more at the top and bottom peaks. 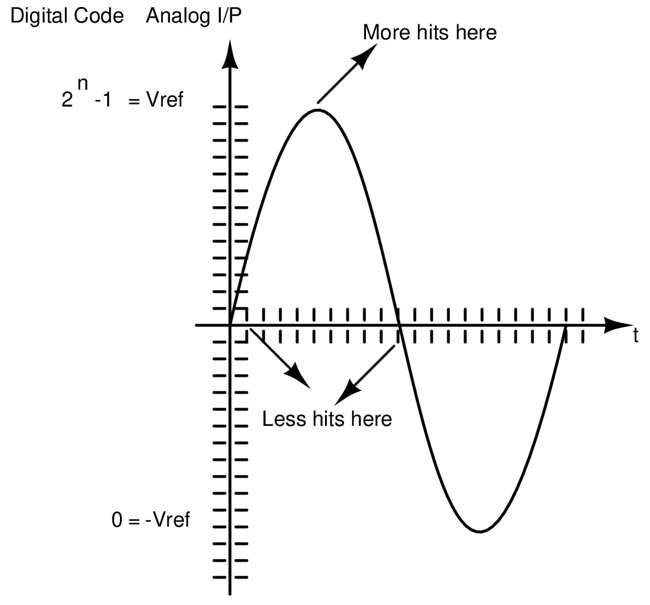 2. A sine wave can’t be uniformly traversed throughout; some sections are closely captured, resulting in the same code multiple times while other sections are captured far apart.

The plot of “hits per code” versus codes is as shown in Figure 3. This is famously referred to as the “bathtub” shape. 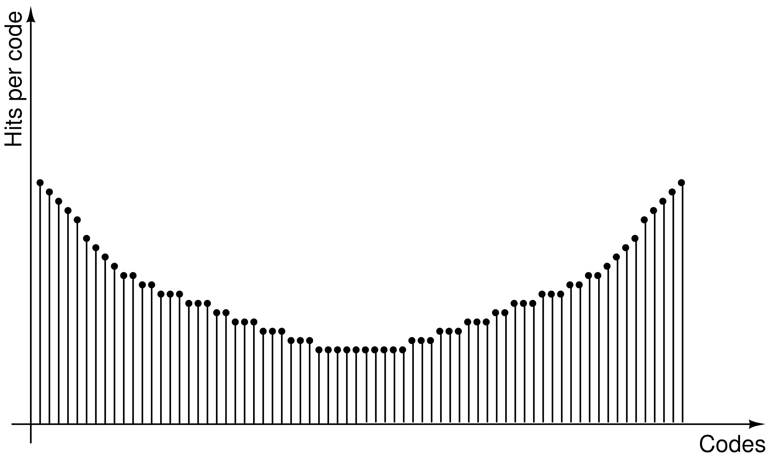 3. This histogram shows the number of hits of the sine wave across ADC codes. It’s famously referred to as the “bathtub” shape.

The frequency of the sine wave can be varied to hit all of the codes at least once. We need to target the mid-code to be hit only once to achieve minimum hits per code equal to 1—it’s the least probable code to be hit in the entire range of codes. 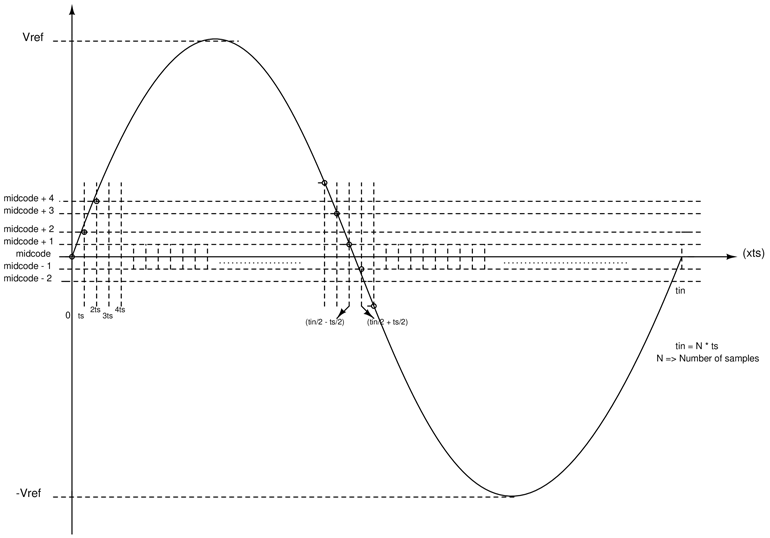 4. The time period of the input sine wave needs to be calculated to ensure that the ADC captures every code at least once. This figure shows how to consider different points on the sine wave for the calculation.

With the least probable code hit only once, we can be assured that all other codes are hit at least once or more than once:

The above condition ensures that the mid-code isn’t traversed again when the sine wave is rolling down from Vref to –Vref:

This can be simplified to:

Single-ended and differential modes have no variation as the ADC produces codes between 0 and 2n−1 irrespective of the input mode.

The number of samples to be captured is given by tin/ts:

Let’s consider an example to get a better idea of the above calculations.

The frequency of the sine wave to hit every code at least once is:

Thus, the frequency of the sine wave to be given is 9.714 Hz. This ensures that we hit all of the codes at least one time.

The linearity measurement can be more accurate with higher hits per code. Let’s now change the hits per code to 32 and recalculate the frequency of the sine wave:

The frequency of the sine wave to hit every code a minimum of 32 times is:

Consider the histogram as shown in this array:

The 1 LSB used in the calculation isn’t the accurate value of 1 LSB, which depends on the ADC’s reference voltage. Hence, this doesn’t involve the gain error component in the transfer function. The offset error of the ADC also doesn’t factor in the above calculations, because there’s no mapping of input voltages to output codes. Thus, the transfer function obtained from the above method doesn’t include gain error and offset error of the system.

INL is given as:

To get the above calculations done, it’s easier if we accumulate the histogram obtained from the sine-wave data capture. Figure 5 depicts the accumulated histogram per code versus codes. 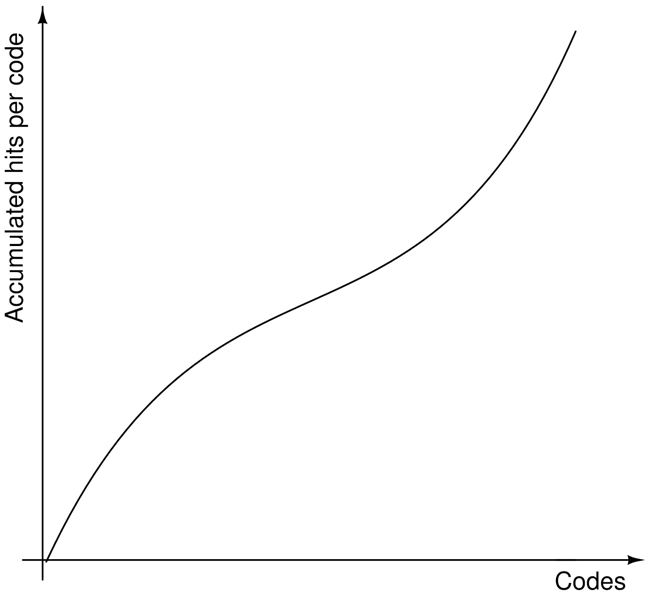 5. Accumulated hits across codes are plotted.

Until now, we have been considering one cycle of low-frequency sine wave. However, two concerns arise with this method:

In Figure 6, we see that the presence of a lower frequency tone along with a sine wave of low-frequency fundamental can affect the histogram. Flicker noise is unavoidable in electronic systems, so there’s a need for a method that can deal with it differently. 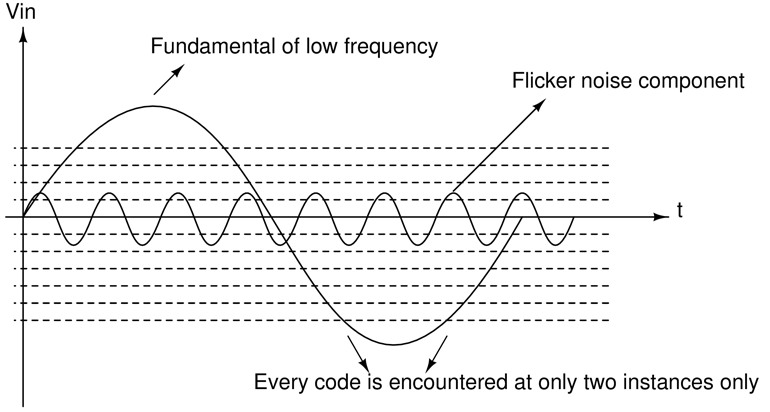 6. This diagram shows the effect of the flicker-noise component riding atop one cycle of a low-frequency fundamental on the linearity measurement.

7. With multiple cycles of the fundamental, the flicker-noise component across different hits can be cancelled out.

Due to inherent flicker noise in most of the electronic systems, it’s also difficult for signal generators to generate a pure sinusoidal of such low frequencies. Thus, we can break up one low-frequency sine-wave cycle into many sine-wave cycles of higher frequency. This will help us overcome the flicker noise with the same number of samples to be captured and hence the same test time.

We obtain the same histogram from one cycle of 9.714-Hz sinusoidal and 128 cycles of 1.2434-kHz (9.714 Hz * 128 = 1.2434 kHz) sinusoidal. Figure 8 shows that the effect of flicker noise can be evened out when using 128 cycles. In addition, it’s practical to obtain considerably pure sinusoidal of 1.2434-kHz frequency. (Please note that we have only depicted one flicker-noise component in the above figures for ease. In practice, there will be multiple noise components.) 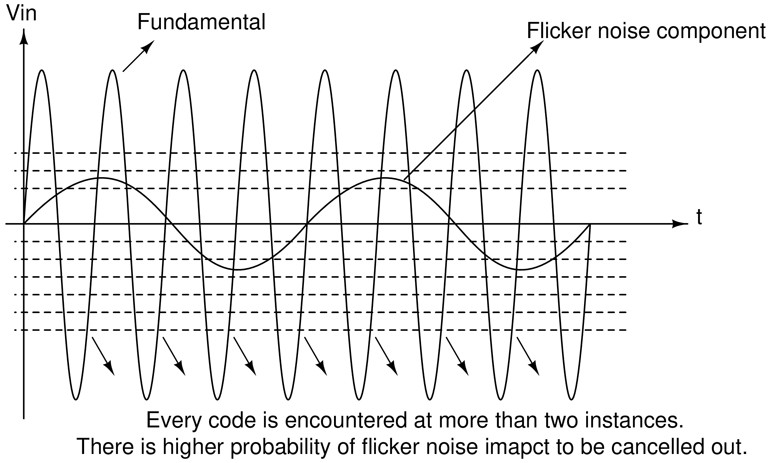 8. A high frequency for the fundamental would ensure that multiple cycles need to be considered for the desired minimum hits per code, indirectly helping to cancel the flicker-noise components across different time instances.

Impact of Harmonics on INL Measurement 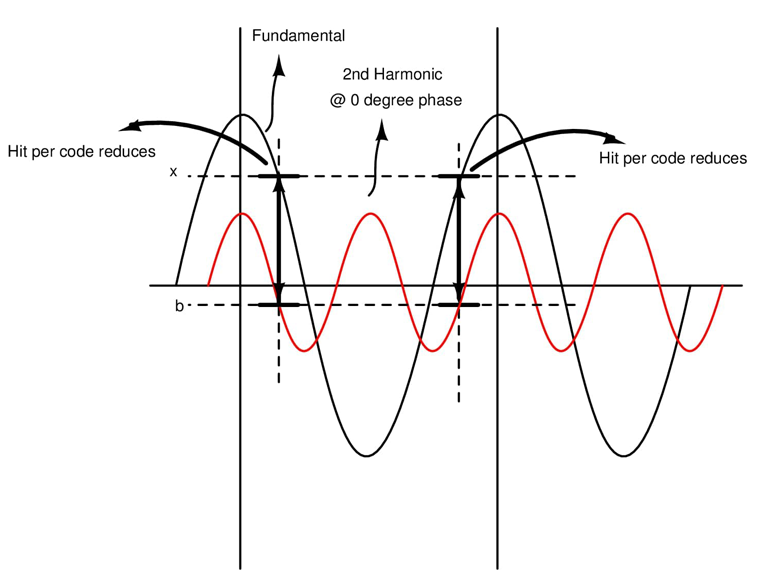 9. Shown is the impact on the histogram when a second harmonic is at a phase difference of 0° with respect to the fundamental.

10. A second harmonic at a phase difference of 90° with respect to the fundamental doesn’t impact the histogram.

Considering any one code ‘x’ of the sine wave, the point ‘x’ is encountered twice in a complete sine-wave cycle. When the phase difference is 0°, the point ‘x’ of the fundamental is adding on to ‘-b’ value of the second harmonic in both the encounters. This clearly means that the hit for code ‘x’ is lesser than the ideal value hit for the code ‘x’. The hit per code ‘x’ reduces because the addition of the second harmonic at that point increases the slope of the sine wave; thus, fewer samples are hit than ideal.

Over the entire sine-wave cycle, the sample hits for the code ‘x’ balances out. This clearly occurs at all points of the sine wave, resulting in a histogram that’s equal to the histogram of an ideal sine wave without any impurities. 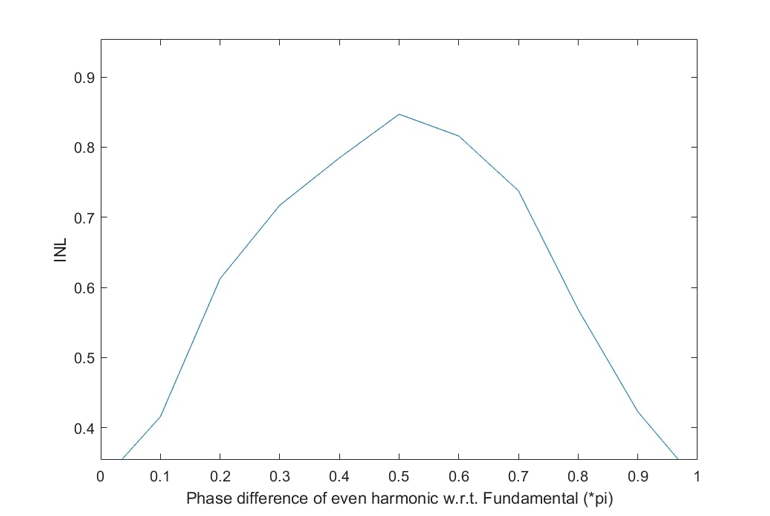 11. This graph shows the variation of INL across phase differences of an even harmonic with respect to the fundamental. 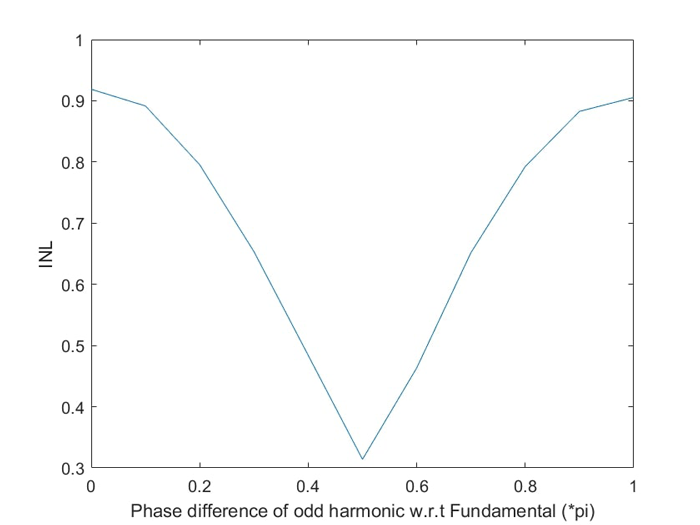 12. This graph depicts the variation of INL across phase differences of an odd harmonic with respect to the fundamental.

Chandana Krishna is an Analog Engineer at Texas Instruments.