Every airplane creates wake turbulence while in flight, which results in two counter-rotating vortices trailing behind the aircraft. These vortices can affect other aircraft as it passes.

According to the FAA website, “wake turbulence from the generating aircraft can affect encountering aircraft due to the strength, duration and direction of the vortices.”

Wake turbulence can force rolling that exceeds the roll-control authority of encountering aircraft, causing possible injury to passengers and damage to aircraft. There are many variables that can affect the wake turbulence, including speed of both aircraft, distance between them and size difference. An added complexity comes into play when the vortices collide (or dance, as researchers describe), creating a more complex and less predictable movement pattern.

An extreme example of the impact of wake turbulence is from 2018 flight QF94 from Los Angeles to Melbourne. The aircraft entered a vortex, causing it to enter into a nosedive for 10 sec.

To help design aircraft that can better maneuver these extreme situations, Purdue University researchers have developed a modeling approach that simulates the entire process of a vortex collision in a reduced computational time. The data extracted from the simulation can then be used to help aircraft respond to these events.

A new modeling approach allows engineers to simulate an entire vortex collision without needing to do extensive data processing on a supercomputer.Purdue University/Carlo Scalo

With more realistic and complete simulations, engineers can design aircraft capable of more abrupt maneuvers or helicopters that can land more safely on aircraft carriers, the researchers said.

“Aircraft in extreme conditions cannot rely on simple modeling,” said Carlo Scalo, a Purdue associate professor of mechanical engineering, in a press release. “Just to troubleshoot some of these calculations can take running them on a thousand processors for a month. You need faster computation to do aircraft design.”

The model, which would still require a supercomputer to run, is called “Coherent-vorticity-Preserving (CvP) Large Eddy Simulation (LES).” The researchers applied the CvP-LES model to the collision events of two vortex tubes that are known to trail the wings of a plane and “dance” when they reconnect. 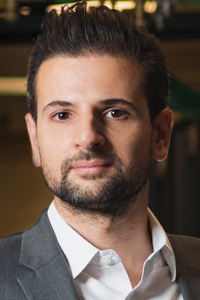 “When vortices collide, there’s a clash that creates a lot of turbulence,” said Scalo. “It’s very hard computationally to simulate because you have an intense localized event that happens between two structures that look pretty innocent and uneventful until they collide.”

Using the CvP LES model, engineers can simulate vortices over any length of time to best resemble what happens around an aircraft. Physicists could also shrink the model down for fluid dynamics experiments.

“The thing that’s really clever about Dr. Scalo’s approach is that it uses information about the flow physics to decide the best tactic for computing the flow physics,” said Matthew Munson, program manager for Fluid Dynamics at the Army Research Office. “There is enormous potential for this to have a real impact on the design of vehicle platforms and weapons systems that will allow our soldiers to successfully accomplish their missions.”