With the world’s population on course to reach 9.7 billion by 2050, the global demand for protein is expected to grow by 40%. One way to meet our protein needs is to sustainably maintain both wild fish reserves and farmed fish.

But with pressure on the already over-exploited wild fish reserves, communities worldwide, including the UN’s Food and Agriculture Organization, are calling for more efficient ways to manage both wild fish stocks and the ocean’s natural biodiversity.

It would help if we provide fish with optimal environmental conditions by reducing stress levels, protecting against parasitic outbreaks and ensuring there is enough food—and developing the technology to do so.

“In order to effectively observe fish in their natural state, a technology is needed which would enable reaching each nook of the fish farm—where, for example, frightened specimens might be hiding,” said Professor Maarja Kruusmaa of Estonia’s TalTech Centre for Biorobotics. “It must be observed whether the feed reaches all the fish or only the more aggressive alpha specimens, whether the fish have parasites or any other health problems, etc.”

In a recent paper published in the journal Royal Society Open Science, Kruusmaa and her colleagues maintain that robots can provide a new set of experimental methods for observing fish in their natural state. Since the robots are physically present, it allows for a controlled variation of predesigned morphologies and movements. Currently, experimental results on how fish are affected by the presence of underwater robots are largely limited to laboratory environments with few individuals and a focus on model species.

The team of researchers investigated large-scale fish responses to robots in the context of practical, underwater observations in fish farms. They examined the effects of underwater robots and a human diver in a large fish aggregation within a Norwegian aquaculture facility, with the explicit purpose to improve the use of underwater robots for fish observations. The behavior of fish was observed in a semi-natural environment in a very large aggregation, in a commercial fish farm sea cage containing about 190,000 farmed salmon. Experiments were conducted with a small, field-deployable, flipper-propelled robot known as U-CAT. Experiments focused on observing aquaculture salmon’s reaction to U-CAT.

The study compared the fish’s reaction to U-CAT against standard technologies and practices in aquafarming using a stationary camera, a technical diver and Argus Mini (a commercial thruster-driven underwater robot). Another goal was to scrutinize the design of U-CAT and its operation and make improvements by investigating the fish’s reaction in response to the locomotion mode and color. 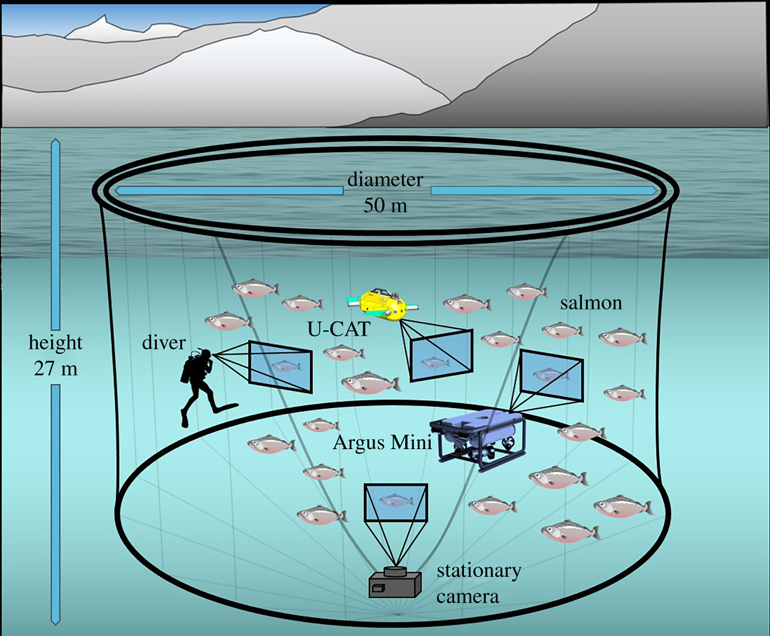 Illustration of the salmon farm sea cage test environment (not to scale). The stationary camera in the sea cage was used to analyze fish’s tailbeat frequency and distance as the dependent parameter in the presence of the human diver, the flipper-propelled U-CAT and the thruster-driven Argus Mini. In addition, the tailbeat frequency was assessed using GoPro3 cameras mounted on the human diver, as well as the U-CAT and Argus Mini underwater robots.TalTech

U-CAT is a biomimetic underwater robot that uses a novel four-fin actuation to give it high maneuverability in complex environments with walls, ropes, nets and other obstacles. The use of fins (mimicking a sea turtle) allows quiet motion relative to traditional propellers. The autonomous robot, developed at Estonia’s Tallinn University of Technology, can be connected to measuring instruments and sensors to provide online updates and monitoring of activity in the sea cage.

The general conclusion was that the experimental robot U-CAT permitted observation in an aquarium at close distance (0.5-1.5 m), while conventional observations methods from platforms are “significantly more disturbing or do not permit observations at all.” The researchers observed a significant difference in fish behavior using the U-CAT robot when compared to a thruster-driven underwater robot, Argus Mini, and a human diver. Specifically, salmon were more likely to swim closer to the U-CAT robot at a lower tailbeat frequency. They also observed that fish reactions were not significantly different when considering motor noise or when the U-CAT’s colour was changed from yellow to silver (it was covered in silver duct tape). 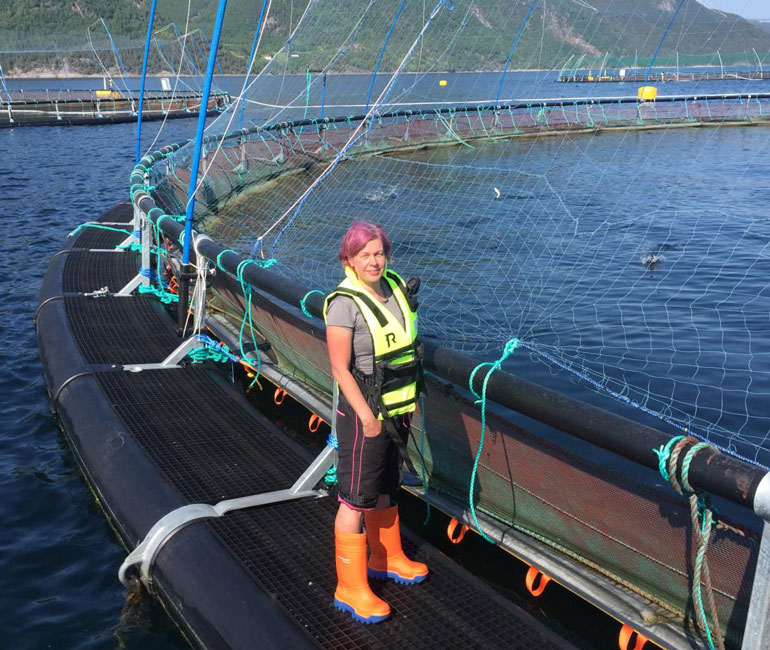 “Robot-human interactions have been investigated for decades, but animal-robot interactions and communication are almost unexplored,” noted Kruusmaa. “However, these studies are of considerable importance: They would inspire advances in environmental monitoring and agriculture automation, and would help to build robots facilitating wildlife research.”