Robotics Manufacturing in the Age of COVID-19

Universal Robots (UR) has released a Q&A with Martin Kjærbo, its VP of operations and supply chain, about adaptations to the company’s robotics manufacturing operations in the wake of COVID-19—and how the crisis will shape UR going forward.

Kjærbo said UR began preparing for the possible impact of the virus on the manufacturing supply chain in January and were prepared when the U.S. implemented stay-at-home orders.

“Many of our R&D engineers have been able to set up labs in their own garages,” he said in the Q&A. “We sent robots home with them and it’s a setup that has actually worked surprisingly well, especially since they are also able to use and collaborate through some of the UR+ simulation software tools available.”

UR, like the majority of global manufacturers, faced a supply chain disruption. The robot manufacturer has a dual-source supply chain in place—a solution many companies will consider after the pandemic if they didn’t already have them—and he said that was one of the most important lessons UR has learned during the pandemic. Kjærbo said that moving forward, his company will consider earlier purchasing of raw material and will take a look at second-, third- and fourth-tier suppliers. 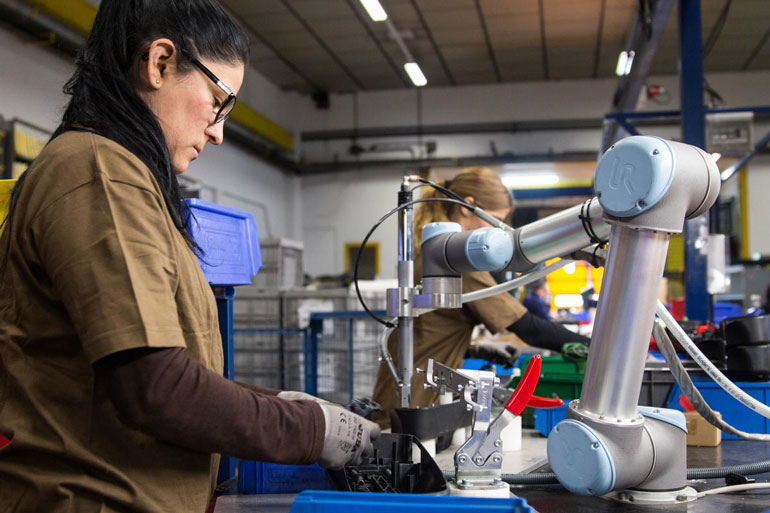 Adding cobots to a production line has long helped many UR customers address labor shortages.Universal Robots

The company’s production lines in Denmark were required to change from one- to two-shift operation, so as to physically spread out its workforce enough to maintain the six-feet social distancing regulation. Another consideration: safely feeding employees in the company cafeteria. 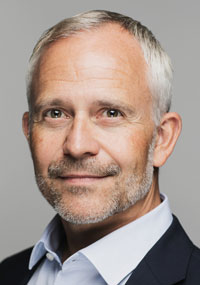 Before joining Universal Robots, Martin Kjærbo held management positions within logistics/supply chain and engineering departments at other Danish companies in the global market, such as pump manufacturer Grundfos and the wind turbine company Vestas.Universal Robots“Spreading the workforce out over two shifts also means less people in the cafeteria at the same time, said Kjærbo. “At headquarters, we ask production staff to break in small groups, all meals are pre-plated with disposable cutlery, the buffet is gone to avoid cross-contamination.”

UR also implemented cobots into its assembly lines to compensate for the reduced number of employees and take over more tasks, adding more automation on the line.

“I think we will emerge from this forever changed,” said Kjærbo. “On the bright side, this has been a big wake-up call that has spurred an amazing amount of production adaptability and increased focus on securing healthy work environments.”