Semiconductors based on gallium-nitride (GaN) substrates are increasingly important in the power-device landscape. Their thermal conductivity, and thus their ability to conduct and dissipate heat, is also a critical parameter.

A two-person team, based at the Nick Holonyak, Jr. Micro and Nanotechnology Laboratory at the University of Illinois at Urbana-Champaign, measured the thermal conductivity of four commonly used GaN substrate implementations along with other defining attributes. They noted that GaN thermal conductivity is reported to range from 110 to 269 W/m-K, which suggests a strong dependence not only on growth methods and conditions, but also measurement techniques and assumptions.

To do this, the researchers fabricated and tested four standard techniques used for fabricating c-plane GaN substrates, and measured their resultant thermal conductivity (κGaN) factors as follows:

To evaluate the thermal conductivity, they employed standard time-domain thermoreflectance (TDTR) techniques with a laser light source generating pulses at an 80-MHz repetition rate. These pulses were split into a pump beam and a probe beam, with the pump beam modulated by an electro-optical modulator using a 200-Hz chopper. A fast-response photodiode detector coupled with an RF lock-in amplifier was then used to pick up the reflected laser signal. The resulting graphs also show the time delay (in seconds) used to allow the thermal energy to propagate through the sample (Fig. 1).

Their efforts didn’t end with the measurement of thermal conductivity. In addition, they used sophisticated cathodoluminescence (CL) and X-ray diffraction techniques to evaluate crystal dislocation densities (σD) along with secondary ion mass spectroscopy to measure impurity concentration. Finally, they developed a complex empirical model equating the relationship between thermal conductivity and these dislocation densities, and believe it explains the experimentally observed rate of decrease in κGaN with increasing σD(Fig. 2). 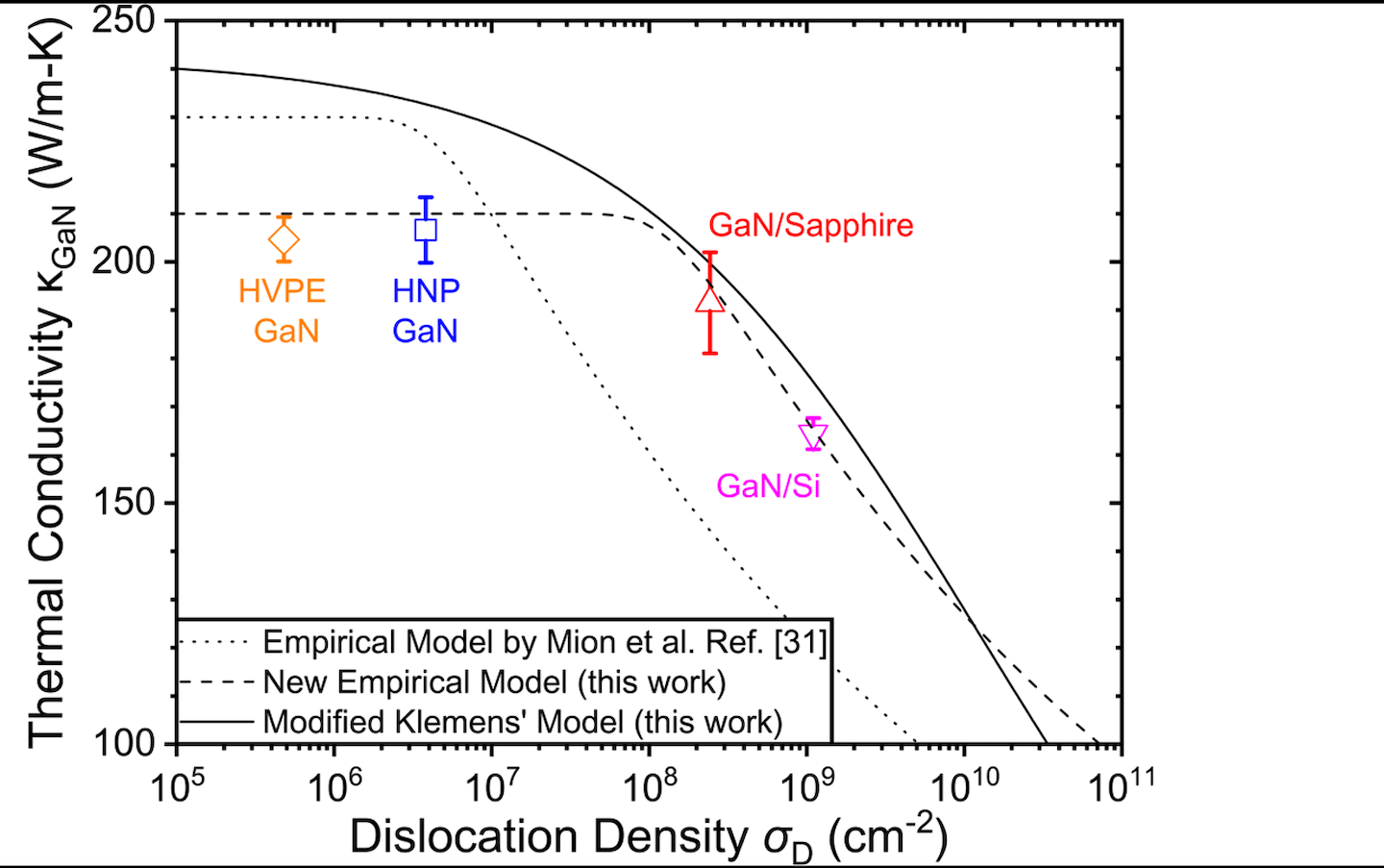 The team further believes their work shows that the thermal conductivity of a heteroepitaxially-grown GaN material can be estimated based on its dislocation densities, thus providing key design guidelines for thermal management in these semiconductor devices. The device-fabrication physics study, which was supported by the Air Force Office of Scientific Research (AFOSR), is published as “Impact of dislocations on the thermal conductivity of gallium nitride studied by time-domain thermoreflectance” in the Journal of Applied Physics from the American Institute of Physics, with additional Supplementary Online Material as well.