Rescuing Our Science Fair from COVID-19

We have been at it for 65 years, but this year’s Bristol-Meyers Squibb Mercer Science and Engineering Fair was a lot different because of COVID-19. Rider University normally hosts our fair at their facilities. However, it was closed down the week of the fair like all educational facilities in New Jersey. It would not have been too bad except the Mercer Science and Engineering Club, of which I am president, was notified days before it was to start. That set us scrambling to figure out what to do.

On the plus side, we no longer had a hard deadline to hold the fair, but we had to figure out whether to cancel like everyone else is doing or to go online and hold a virtual fair. We decided to do the latter and push back the date by a week.

We have a custom website that’s used for fair registration (Fig. 1). However,  it needed to be modified to handle additional uploads from the students. Luckily things like the abstracts and research plans had been posted weeks ago. Photos of their display boards and support for artifacts like lab notebooks and research papers still had to be added, though. Students also had to provide all of this information, plus the release forms that we normally signed and brought to the fair required uploading, too.

1. Students used the Mercer Science and Engineering Fair website to upload their research plans, photos of their boards and other materials.

We have three divisions for grades 4 and 5, grades 6 through 8, and finally grades 9 through 12. The latter is the senior division and those students have always been interviewed. We followed the same methodology for all of the divisions and used Zoom video conferencing for the senior interviews (Fig. 2). 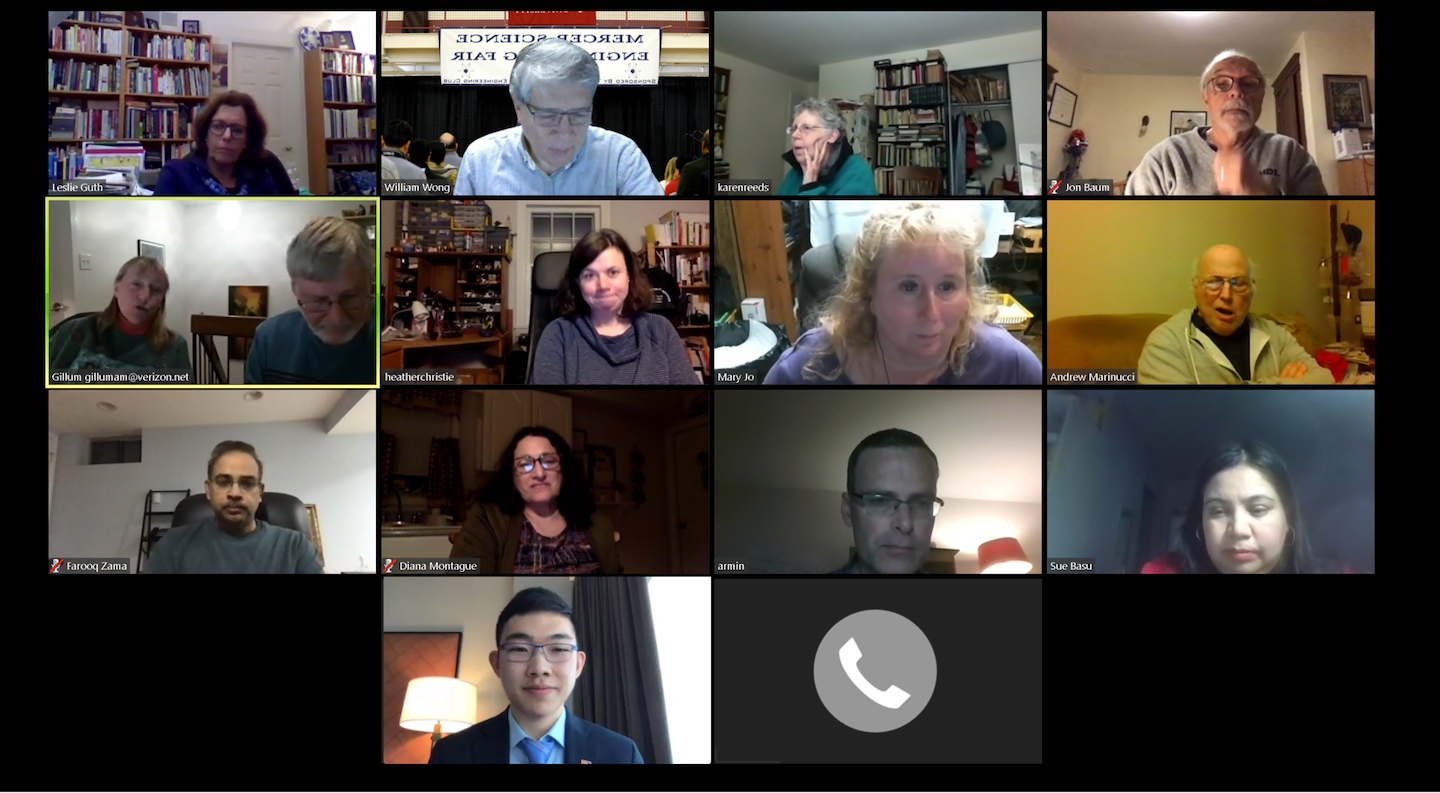 2. Changing to video conferencing allowed judges to interact with students without being in direct contact.

We had to set up shared spreadsheets for tabulating results that were previously done in person. There were multiple conferences, since judge groups had to discuss who won what award. We limited the seniors to 15-minute interviews to keep everyone on schedule.

Surprisingly everything came together. I think giving everyone something extra to do withing a given timeframe helped. We ran a number of video conferences so that everyone could make sure their cameras and microphones worked. We still ran into issues—we only had to reschedule two students due to technical difficulties. Luckily, only 20 seniors needed to go through the interview process, and two called in from overseas as they were boarding students who had returned home. Still it took almost a full day. We discovered Zoom’s breakout rooms too late, but we may use those next time as doing the interviews online has some benefits.

The judges’ results have finally been tabulated and the awards are ready to announce. You’ll see it here first as I have not had a chance to post the full list on our website yet. Sonja Michaluk, a senior at Hopewell Valley Central High, won the grand prize with her project Optimizing Taxonomic Identification of Chironomidae (Diptera) for A Novel Method of Monitoring Our Global Fresh Water Supply using DNA Barcoding (A Continuation). She has won this three years in a row.

Michael Zhang from the Lawrenceville School was second runner-up with the project Metal-doped Zinc Oxide Nanochip for Surface-Enhanced Raman Spectroscopic Sensing of Opioid in Water. Philip Voronin’s Freedom Chair was third runner-up. All of the projects can be found on our website.

You can watch videos we shot at past Mercer Science and Engineering Fairs on YouTube (Fig. 3). We will be including some from the online senior division interviews from this year’s fair, too. 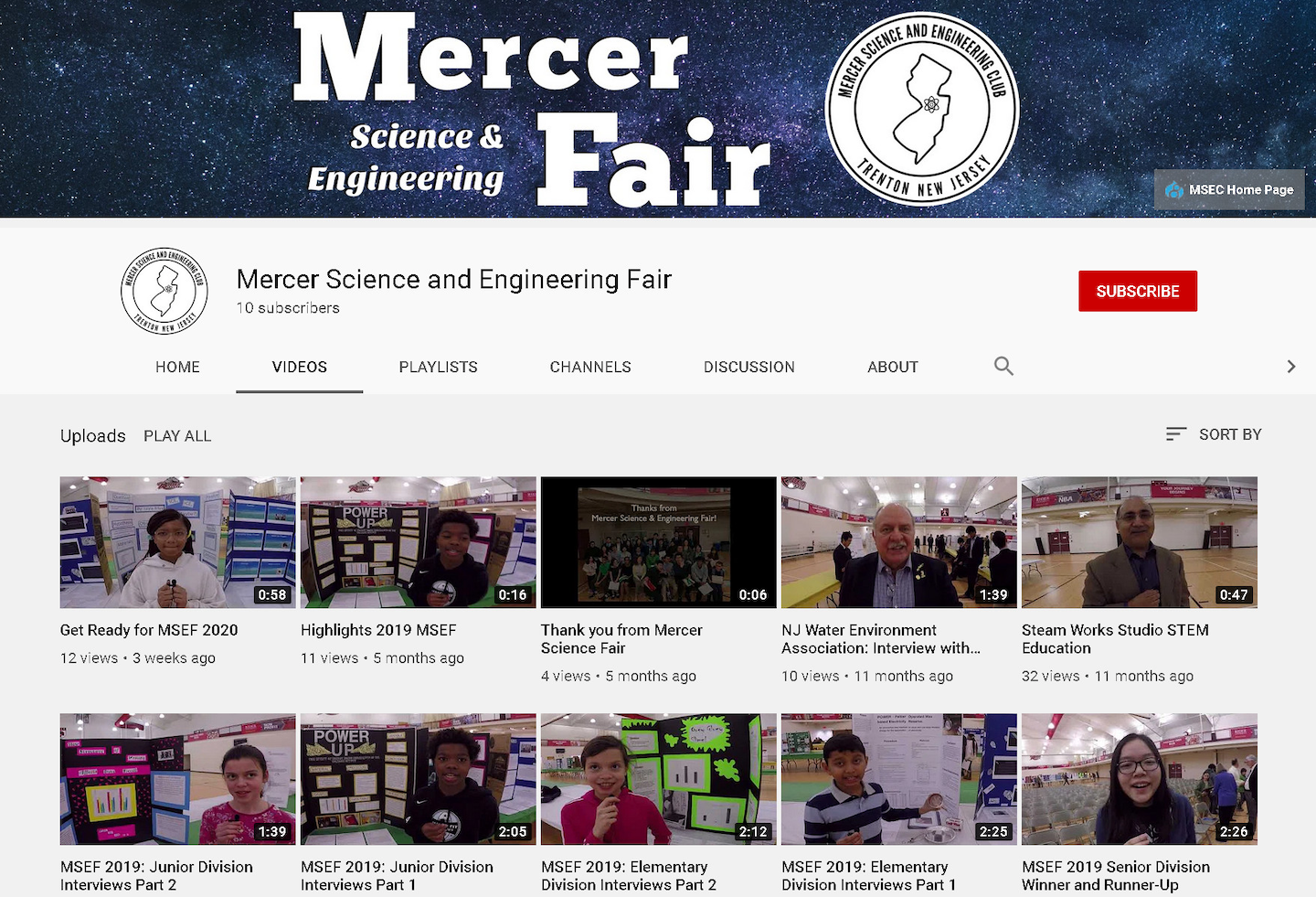 3. Videos from past fairs and online interviews can be found on the MSEF YouTube site.

Overall, feedback has been very positive. We still will not be able to hold an award ceremony. Certificates, ribbons, and plaques will have to be mailed out. The Regeneron International Science and Engineering Fair (ISEF), where we would send our grand prize and first runner up to, has been cancelled. That was set to occur in May and we were expecting over 1,800 students to compete. The Broadcom Masters competition is still on and our middle-school winners in grades 6 through 8 is still on, but it occurs months from now when we will hopefully be past the current state of affairs due to COVID-19.

We can even hope that this might generate more interest in the science fair. We’ve had a participation high of about 450 students; this year’s fair had less than a quarter of that. Teachers and school administrators have been hard-pressed even with the increased importance of STEM.

So if you’re a student attending school in Mercer County, N.J. next year, we hope to see you in person at the fair. If not, we will have a more refined process in place to do another virtual fair.