Radar as a Sensor: Who Would Have Thought?

When you can package a radar system in a 10- × 10-mm chip, you end up with a new type of sensor that was unimagined a few years ago. Today, it’s becoming common practice to use a radar chip for some creative sensing applications.

The industrial and automotive markets have a tremendous need for innovative sensing capabilities to assist vehicles, factories, buildings, and cities to better sense the world around them and help them make more intelligent decisions. Millimeter-wave (mmWave) radar-sensor implementations are increasing as well as expanding. Some interesting new examples include keeping track of the elderly, automotive in-cabin monitoring, and robotics safety. This article looks at how Texas Instruments’ 60-GHz radars are expanding the industrial and automotive sensor markets.

Radar Sensors Unlike Others

Literally dozens, maybe even hundreds of different types of sensors are used in industrial and automotive applications. Temperature, pressure, flow, light, and other common physical characteristics are the most often measured or monitored. Presence, range or distance, motion and velocity, and angle of direction tend to be difficult to monitor. Often such measurements must be done at night, in bad weather, or in compromised environmental conditions. This is where a radar sensor comes into play.

A complete radar sensor consists of the radar chip plus an antenna and a power source. Texas Instruments’ IWR6843, a 60-GHz mmWave radar sensor, which operates over the 60- to 64-GHz range with FMCW (frequency-modulated continuous wave), is just such a chip (Fig. 1). It’s made up of three radar transmitters, four radar receivers, and all of the required ADCs, DACs, and synthesizers.

1. Shown is a general block diagram of the IWR6443 radar.

The other major segment of the IWR6843 is its processing power, which is made up of an Arm Cortex-R4F 200-MHz MCU as well as a digital-signal-processor (DSP) section made up of a TIC674x DSP to do the fast Fourier transforms (FFTs) and other advanced processing, both with a mix of memory and standard I/O interfaces. The chip is packaged in a 10.4- × 10.4-mm BGA.

The transmitters emit a FMCW signal called a chirp. This is a mmWave sine wave that increases in frequency from 60 to 64 GHz over a 40-µs period (Fig. 2). The signals are reflected from the target and the receivers detect and capture them. Then these signals are processed in various ways (FFT, etc.) to produce range, velocity, and angle measurements. 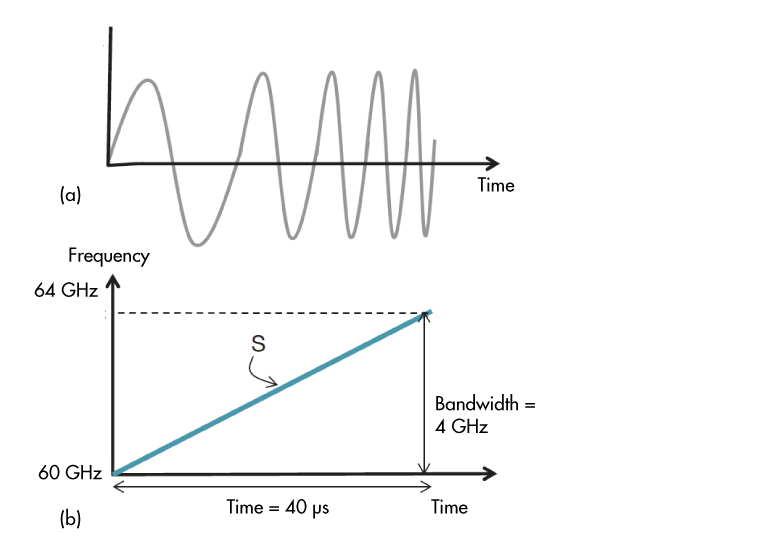 2. These radar chirp signals illustrate amplitude vs. time (a) and frequency vs. time (b).

Traditional and simpler sensors only detect and measure changes in some physical characteristic like temperature. But a radar sensor can determine the distance to an object (range), the velocity of an object, and the angle where it is with respect to some reference. It can “see” through walls, especially wood and sheet rock. This type of sensor is even able to detect a glass wall, window, door, or partition. And it can accurately measure the range to any of those things.

Range resolution at 60 GHz is 3.75 cm. With this kind of resolution, these sensors can detect, identify, and separate closely spaced objects. Applications permit these sensors to detect and count individual signals from things in a factory or people inside a room or vehicle. Range resolution is mainly a function of the signal bandwidth—the wider the bandwidth, the better the resolution. And as part of that capability, don’t forget that motion detection is a useful feature.

Furthermore, radar sensors can measure velocity. Because of the Doppler effect on the varying frequency signals, the speed of the object being detected can be computed. The velocity resolution is almost a direct function of the center frequency of the signal. Here again, the higher the transmission frequency, the greater the resolution.

All of the signal capturing and measuring is generally called rich point-cloud data. The total amount of data you pick up leads to better measurements and more different types of measurements that can be made. For instance, the angle of the signal detected is able to be computed with some of the captured data.

Radar-on-a-chip devices were first used almost extensively in automobiles. Applications included automatic cruise control, emergency self-braking, lane-change detection, and other use cases. Those applications still exist and will increase due to the mandatory advanced driver-assistance systems (ADAS) in most new modern vehicles. Some additional uses derive from the radar sensor’s ability to penetrate solid objects, making them good proximity detectors.

For instance, radar’s ability to sense through solid materials makes it possible to detect an unattended child, monitor occupant status, and estimate driver vital signs with greater accuracy than ever before. You can detect child presence and motion, count the number of people in the vehicle, and check to see if the driver is too drowsy to drive.

But experience with these applications has stimulated interest in other sectors. For example, 60-GHz radar IC sensors bring new awareness and intelligence to applications in robotics, building automation, and factory manufacturing. Robotics uses are particularly helpful. Radar sensors can provide the safety for large industrial robots by detecting position, velocity of motion, and even angle. An invisible safety “cage” or curtain can be defined for the robot to provide visible and audible warnings.

A Word About Antennas

The only missing pieces to a radar sensor are the power supply and the antenna. Thankfully, at 60 GHz, the wavelength is short (about 5 mm), so antennas are small. A simple half-wave dipole at 60 GHz is only 2.5 mm. Thus, designers at this frequency can create phased arrays that provide gain, directivity, and the potential for beamforming. A small phased array can be made directly on a PCB, or in some cases, right on the IC chip. A horn antenna is an option in special applications.

Single-chip radar has been around for years now and is a proven technology, of which TI is a major manufacturer. These devices come in a wide range of different configurations, and multiple evaluation modules are available for design and testing.