Qualcomm rolled out its latest flagship chip for 5G smartphones, featuring a built-in modem for the first time in its high-end product line and vastly improved performance and efficiency.

The San Diego, California-based company introduced the new Snapdragon 888 at its annual tech conference, adding that it would “set the benchmark for flagship smartphones” in 2021.

Qualcomm, the world’s largest vendor of cellular modems and central processors for phones, is trying to strengthen its dominance in the 5G smartphone market. Its flagship products are used in most of the top-of-the-line smartphones based on Google’s Android operating system (OS). The company’s family of 5G baseband modems have slots in Apple’s latest iPhone.

The company says that it takes three years on average to develop its most advanced chips, such as the Snapdragon 888 or its predecessor, the Snapdragon 865, and billions of dollars of investment. The improvements it brings to its flagship products are one of the levers it pulls to persuade customers to favor its components instead of rival chips from Mediatek and others.

It is also trying to prevent smartphone giants and other customers from developing chips internally, a segment where Apple, Samsung, and Huawei are investing aggressively. While other vendors sell systems-on-a-chip for smartphones, Qualcomm is dominant. It controls 35% of the total market share, leading Apple and Samsung, according to Strategy Analytics.

At the heart of the Snapdragon 888 is an octo-core central processing unit combining large, high-performance cores and smaller, energy-efficient cores to bolster its battery life. The chip incorporates a single core based on Arm’s Cortex-X1 technology, which serves to pump out short bursts of performance at the cost of burning through battery life faster than usual. The high-performance core is clocked at 2.85 GHz and contains 1 MB of internal L2 cache.

The chip is also supplemented by three Cortex-A78 cores clocked at 2.4 GHz and adding 512 KB of L2 cache. The remaining Cortex-A55 cores are focused on energy efficiency and are clocked at maximum speeds of 1.8 GHz, the company said. The Snapdragon 888 adds 4 MB of L3 cache and 3 MB of system cache to store data for faster access. Together, the cores can manage up to 25% more performance than its previous generation of processors.

The Cortex-X1 is a performance-at-all-costs core introduced by Arm to challenge Apple’s A-series chips for the single-threaded performance crown in the smartphone arena. The Cortex A78 belongs to the same generation of CPU cores as the Cortex-X1. But it is more focused on Arm’s traditional strategy of striking the right balance between performance, power, and area.

The chip can access up to 16 GB of LP-DDR5 DRAM, and it also supports USB Type-C.

The chip is manufactured by Samsung on its 5-nanometer node, resulting in more computing might crammed in a smaller space and more power efficiency compared to the Snapdragon 865 chip manufactured by TSMC on the 7-nanometer node. That brings it on par with Apple, which is rolling out its new generation of A-series chips on a 5-nanometer node from TSMC. Qualcomm said the advances in its flagship chip add up to more “sustained performance.”

Another area of improvement is in the graphics processing unit, or GPU, which brings up to 35% more performance than its predecessor – its largest generational leap in performance yet. Qualcomm said the Adreno 660 GPU rolls out lusher colors, sharper details, and faster frame rates to consumers playing more graphically-advanced games on high-end phones.

The Snapdragon 888 also offers more energy efficient than the Snapdragon 865, with a 25% improvement in the CPU’s performance-per-watt and 20% more power efficiency in the GPU. 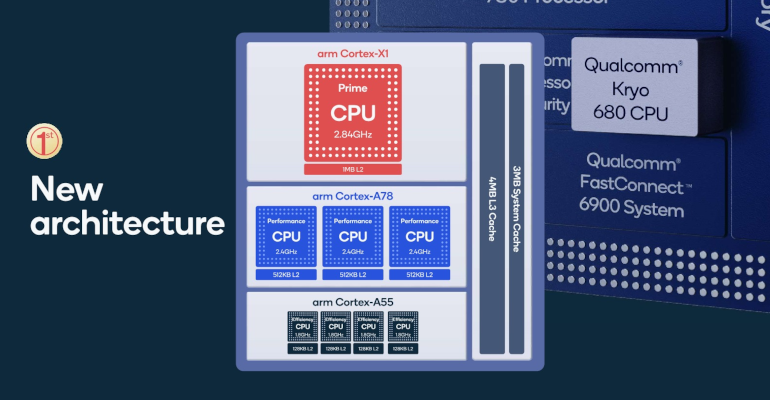 The Snapdragon 888 chip incorporates an internal 5G modem for the first time in its flagship product line. In recent years, phone manufacturers have been forced to use a standalone 5G modem, pairing it with Qualcomm’s Snapdragon SoCs. But the unattached modem inflated the cost and power of the device. The move also reduced space on the PCB for other parts.

Upgrading to the 5-nanometer process made it possible to integrate the 5G modem without hurting its production or sacrificing its power consumption or speed. That should also make more room for other components in the phone, where space is at a premium. Qualcomm has rolled out 5G modems in its mid-range chipsets but it was forced to compromise on more advanced features, including millimeter wave, to fit it all on a single slab of silicon.

The internal modem, the Snapdragon X60, can handle any combination of frequency bands in any part of the world where its customers sell smartphones, including the sub-6 bands used in 4G. It also connects to millimeter waves, which offer faster data transfers but are less widely deployed. Qualcomm said that its onboard modem supports speeds of up to 7.5 Gbps, beating out other modems on the market. Upload speeds max out at 3 Gbps.

None of Qualcomm’s rivals currently sell baseband modems can support the sub-6 bands and millimeter waves on the same piece of silicon—one of its key advantages in the market. The modem can also aggregate any of the frequency bands used globally—including the TDD and FDD bands—to lift the performance floor of 5G technology. By sending data over different bands at the same time, the X60 modem boosts the average speed of the smartphone. 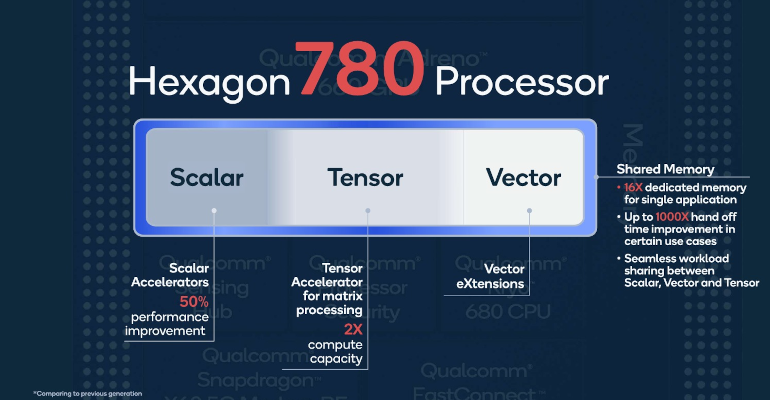 One of the most advanced tools in its technology arsenal is its Hexagon 780 DSP, which is used to manage machine learning chores on the smartphone itself instead of in the cloud. Qualcomm said that it vastly improved the internal architecture of its Hexagon DSP, which includes scalar, tensor and vector accelerator cores targeted at artificial intelligence tasks.

The company said it integrated these independent cores into a single block of intellectual property, increasing its energy efficiency and speed while carrying out artificial intelligence chores. It also increased the internal SRAM that serves as the cache for the machine learning cores, where data is stored for fast and easy access, by 16 times. That opens the door for it to fit larger machine learning models on the smartphone itself, further lifting its performance.

The chip coordinates the Kryo CPU, Adreno GPU, and Hexagon DSP to serve as the internal artificial intelligence engine. The chip can handle up to 26 trillion operations per second, or TOPS, to automate advanced photography features, identify objects and faces in images, and understand “OK Google” or other commands. That compares to the 15 TOPS in the Snapdragon 865, while featuring three times better performance-per-watt.

The chip also brings improvements to the internal image signal processor (ISP), giving it the computational might to process images with more vivid colors and vast amounts of detail. 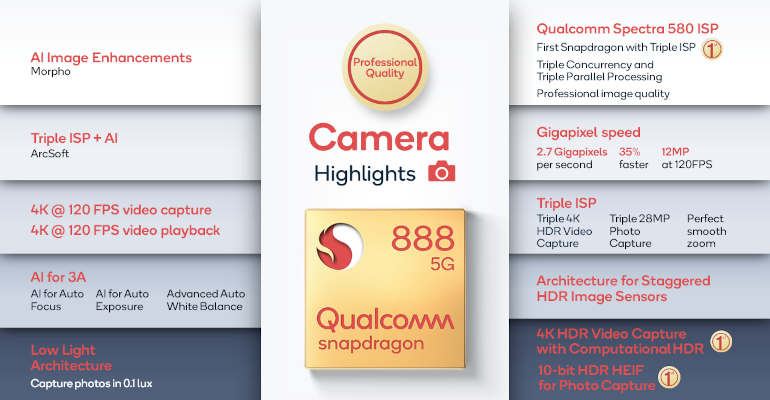 The chip adds another independent ISP, bringing its total to three, enlarging its processing pipeline and giving it a generational leap of up to 35% in performance. The chip can shoot up to 120 images per second to better photograph or record moving objects. Today, most of the flagship smartphones on the market combine three cameras, each with a different lens–a wide-angle, an ultrawide-angle, and telephoto–in addition to front-facing sensors.

The improved image processor can capture up to three images at the same time in 4K resolution. The Snapdragon 880 also supports shooting video with HDR, for high dynamic range, where it captures frames from different cameras on the smartphone, combining the best parts to reduce blurriness in the final shot while bringing out shadowy and bright details.

Qualcomm sells its flagship product line, including the Snapdragon 880, into the higher end of the smartphone space, ranging from Samsung’s Galaxy to Google’s Pixel to other models that can cost in the $1,000 range. Over time, the US semiconductor giant brings most of the features in its flagship product line to chips targeting more affordable phones.

More than 10 smartphone vendors plan to use the Snapdragon 880 in flagship smartphones starting in the early 2021, including LG, Lenovo, Motorola, Oppo, Vivo, and Xiaomi.