Engineers and designers are using all the engineering tools and techniques in their arsenals to improve the efficiency of solar power facilities. Most end up building solar farms covering acres of mostly flat land with row upon row of identical panels of solar cells.

The managers and engineers at Sunfolding, a San Francisco-based company, decided to put their heads together and devise an even more efficient method of building the next-generation of solar farms.

The goal was a flexible, easy-to-assemble array that could deliver the most electricity for the lowest cost. The result was the Sunfolding T29 Tracking array. Like other solar arrays, it is designed to be laid out in East-West rows with the photoelectric cells facing south to catch the sun from morning until dusk (in the Northern Hemisphere). To increase the amount of sunlight shining on the cells over the course of day, Sunfolding added a simple pneumatically powered tracking device that keeps the arrays pointed toward the moving sun.

The T29 uses AirDrive X actuators. Each contains two flexible air bladders—one to the West, the other to the East—sandwiched between two metal plates. The solar module mounts on the top metal plate. When the western bladder inflates, it lifts the west side of the panel and angles it towards the east, which lets it gather more sun in the morning. It then does the opposite toward sundown.

Single-axis trackers such as these generate 20 to 25% more electricity than static arrays, depending on geography and other installation factors. The question in the industry is no longer whether to use trackers or not, but which tracker is most profitable.

On the T29, a Tracker Controller controls the air pressure into and out of the 50-lb AirDrive X so that it points the modules toward the sun. The controller is programmed with celestial tables containing the sun’s position in the sky during the day and aims the modules accordingly. A controller on end of each row of modules handles the entire row. 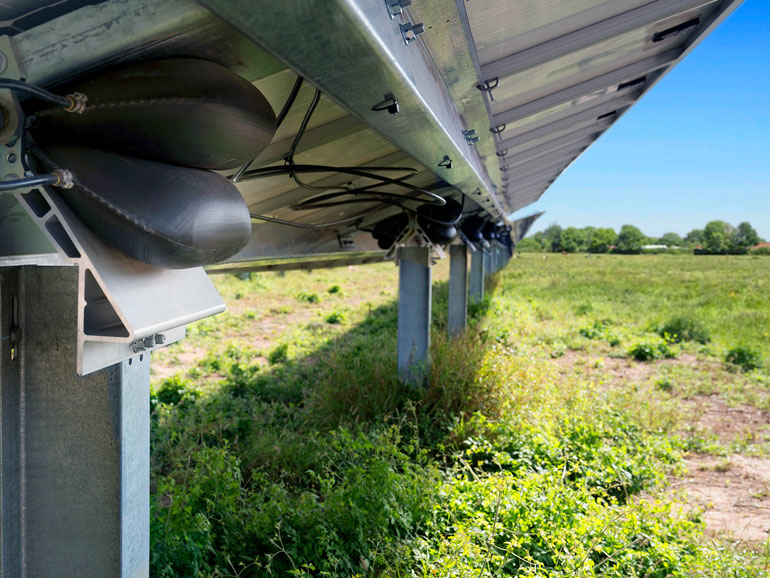 Compressed air comes from Sunfolding’s Supply Air System (SAS). It has a single air compressor and can handle modules or panels that generate from 4 to 6 megawatts of electricity. So, for example, a 50 MW solar farm might need 10 SAS. The compressor consumes a negligible amount of electricity in terms of cost, according to Sunfolding. They also use air as the working fluid, a readily available material that’s free of charge and can be vented to the atmosphere. The SAS’s are delivered from the factory as pre-assembled plug-and-play units that get dropped in place near the inverter.

Relying on this pneumatic approach gives the T29 significant benefits. The units only have to move the modules once per day. That’s a pretty low cycle rate, translating into less than 13,000 cycles over a 35-year lifespan. The air actuator in the T29 could likely withstand 6 million cycles before needing to be replaced. This means Sunfolding T29s are durable with little need for maintenance.

The T29 system consists of mainly off-the-shelf components that have already undergone rigorous testing in the lab and in the field. There is also a supply chain of manufacturers and distributors already providing pneumatic parts and components for a handful of large industries. For example, a complete solar farm of Sunfolding T2s can be hooked up using pneumatic-hose harnesses made by companies that supply similar harnesses for cars and trucks. The automotive-grade harnesses connect quickly and easily using standard connectors. 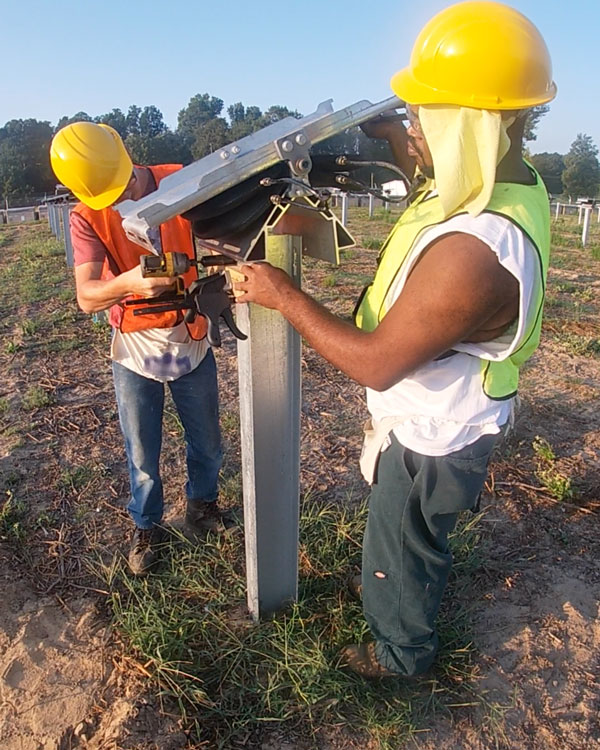 Installing Sunfolding T29s is simple and requires no special tools.

The T29 also uses fewer parts than arrays with tracking systems that have complex machinery and an army of motors or hydraulic actuators. The pneumatic system has far fewer critical points of failure and fewer maintenance needs than other tracking-array technologies, according to Sunfolding. This lowers costs, including installation, and reduces the risk of failure.

With tracking technologies that rely on heavy motors to move the panels, designers have an incentive to ensure the motors are used to their fullest capacity. This leads to long rows of panels powered by one motor to keep capital expenses in check. But that limits how designers can arrange the arrays on the parcel of land available for the solar farm. With Sunfolding’s air-driven trackers, designers can efficiently use shorter rows of panels to put as many solar panels as possible on the land no matter how it is shaped. The shorter rows also let power wires or even roads cross the land without letting too much acreage go unused.

Sunfolding is competitive with other self-tracker solar arrays. The real advantages come in the form of flexible layouts that get more electricity from odd shaped parcels on rough terrain, as well as construction savings due to fewer components and fasteners that simplify the installation process. The finished farm has fewer maintenance requirements over the life of the project.

See a video of the Sunfolding T29 tracking array in action here.