Piezo elements are electromechanical transducers that convert mechanical forces (pressure, tensile stress or acceleration) into voltages. The inverse piezoelectric effect, precisely the opposite, forces piezo elements to change shape when a voltage is applied to them. This lets them generate mechanical motion and be used as oscillators.

The piezoelectric effect (from the Greek word for “pressing”) was discovered in 1880 by the brothers Jacques and Pierre Curie, the latter being the husband of Marie Curie. They found some materials, usually ceramics with conductive surfaces, convert electrical energy into mechanical energy and vice-versa.

Using strong electric fields, engineers can give some ceramics piezoelectric properties that make them change shape when a voltage is applied. These shape changes can be harnessed to power a drive and be created using almost zero power. This is one advantage of piezoelectric valves and drives.

In electrical terms, a piezo element is a capacitor consisting of two electrically conductive plates and the ceramic piezo material between them acting as a dielectric. Current only flows while the capacitor is charging, and flow drops to zero when charging is complete. Electrical power is calculated as voltage × current, so the power is zero if no more current flows. In applications that need to be extremely energy-efficient, it is even possible to recover the charging energy when the drive is reset and then use it again for the next charging operation.

Types and Versions of Piezo Transducers

Piezo elements can be crafted into several types of actuators, depending on what the needs are: disc transducers, bender actuators or piezo stacks.

Bender actuators are rectangular with a piece of piezo ceramic material that has been rendered conductive on both surfaces. This piece is also joined all along one side to a conductive substrate. One end of the actuator is usually fixed, so motion gets converted to a bending movement.

Bender actuators can be designed to have a range of possible forces and motions, and they are well-suited for use in pneumatic valves. Typical characteristics include deflection of several tenths of a millimeter and forces up to 1 N.

Bender actuators can be designed to have a range of possible forces and motions, and they are well-suited for use in pneumatic valves.

One variation on the bender actuator is called the trimorph. It has a second ceramic layer sandwiching the substrate. This increases its performance and lets it operate across a wider temperature ranges, thanks to its symmetry.

A disc transducer consists of a thin ceramic disc bonded to a metal substrate. To generate an electric field, the flat  area on the disc’s top surface must be metalized. If a voltage is applied to the top surface and the ceramic disc, the ceramic expands and the disc becomes thicker with a smaller diameter. Overall, the disc bends spherically, letting them be used in high-frequency loudspeakers, sensors, micro pumps, fans and ultrasound generators, such as are often used in automobile distance sensors.

Stack transducers (piezo stacks) are towers of stacked piezo discs connected mechanically in series but electrically in parallel. In contrast to disc transducers, operation is not triggered by bending the composite material but by expansion in the direction of the field. This allows only short strokes—a maximum of 0.2% of the overall height—but with actuating forces of up to several kilonewtons. Stack transducers can be found in liquid valves, such as those used in diesel fuel-injectors and micro positioning.

Piezo elements shaped as benders serve widely in pneumatic valves. A piezo valve’s performance depends on the strength of its electric field: The greater the field strength, the better the actuator and valve perform.

Switch-on energy, E, can be calculated as an approximation using the formula E = CU²/2, where C is the transducer’s capacitance and U is the control voltage. Values usually lie between 0.5 and 5 mW, and the transducer’s capacitance is generally around 30 nF with control voltages up to 300 V DC. Switch-on energies of piezo valves are always specified in milliwatt seconds. It is not possible, as with solenoid valves, to specify power in watts.

When a piezo valve has been switched on and the power supply interrupted, the valve remains on because charge carriers cannot flow past the interruption. To reset the valve, the transducer charge must be removed. This can be done by using buffer storage in another system (energy recovery) or converting the energy to heat (short circuit). This is why it takes a changeover switch instead of an on-off switch to operate the valve.

In the world of electrically controlled pneumatic valves, solenoid valves are the absolute standard with a market share of almost 100%. Nevertheless, piezo valves offer many advantages over the solenoids and open up entirely new areas of application.

● Low energy consumption and no heat generation. By using the capacitive principle, piezo valves require virtually no energy to maintain an active state. They also do not generate heat, provided high-frequency controls are not used. And they are not used because higher control frequencies need higher switch-on energies.

Piezo technology is ideal for battery-powered devices. Compared to solenoid valves, piezo versions increase the service life of a battery pack by a factor of seven or greater.

● Intrinsic safety is a term describing the level of protection required on hardware that will operate in potentially explosive atmospheres. An electrical system is intrinsically safe if most energy it can store can’t cause ignition of the atmosphere if there’s a fault. Piezo valves can meet this requirement.

● Switching speeds are playing larger roles in today’s high-speed applications, such as sorting systems. Piezo valves are ideal as they can be incredibly fast, easily reaching the submicrosecond range.

● Minimal weight due to housings made of mostly plastic, with little to no iron or copper. Lighter equipment is always more portable. 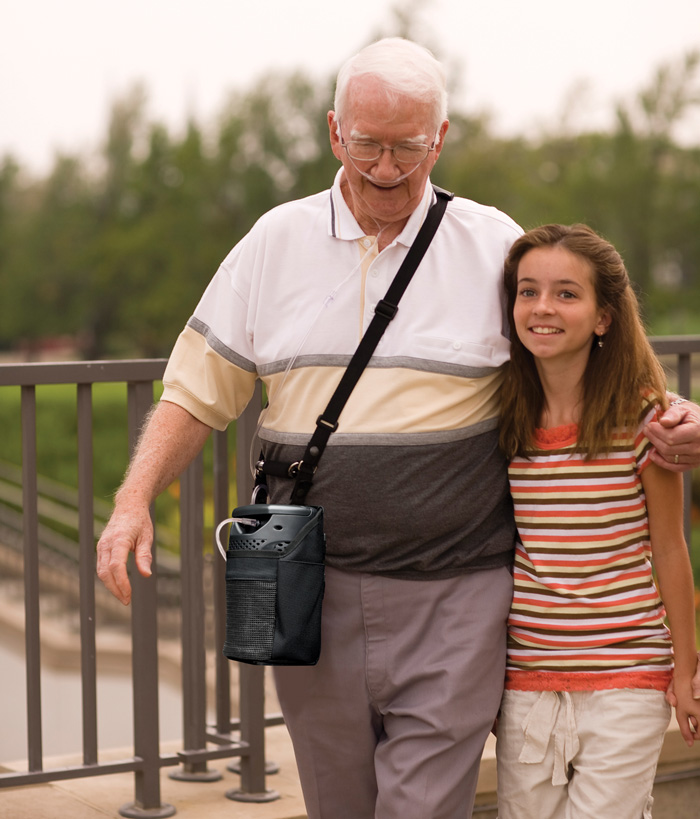 ● Low costs in high volumes. Piezo valves can be mass-produced if large quantities are required. For example, piezo-ignited lighters are available at low cost.

● Long service life. Piezo valves drives can handle an unusually high number of operating cycles if well designed. They consist of a single, solid-state working component with no other wearing parts subject to friction.

Flow Control. Some applications use flow regulators with constant mass flow rates for long periods of time. Typical examples include production of artificial atmospheres such as those required by semiconductor fabrication at the front end for coating and at the back end for bonding. This type of load is easy for a piezo valve because it involves a steady state with virtually no consumption of energy. But it would be an extremely heavy load for a pulse-width modulated switching valve—both in terms of energy and mechanically. 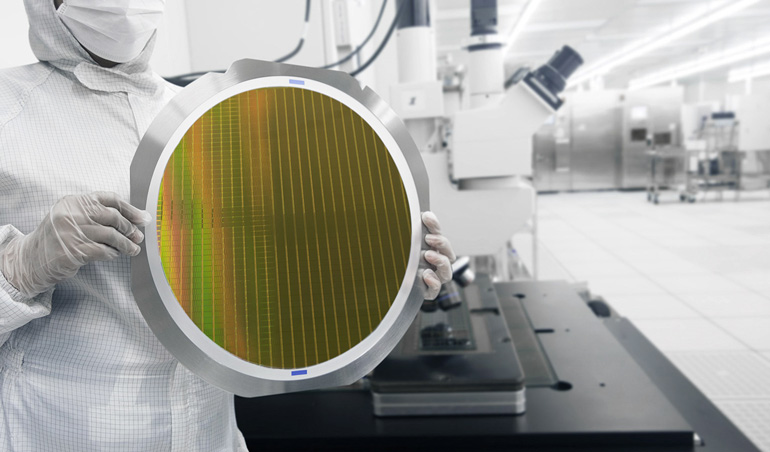 Handling fragile workpieces. One method for moving sensitive workpieces is the “speed controller” for double-acting pneumatic cylinders. This lets a pneumatic cylinder execute speed-controlled, jerk-free motions. It takes four piezo valves hooked to a controller to form a system that can be connected to a double-acting cylinder. Speed is controlled by maintaining a constant cylinder exhaust flow rate. This low-cost system does not need an expensive displacement encoder and can execute smooth start-ups and braking.

Applying adhesives. To prevent drips after pneumatically applying adhesive, a vacuum is applied after a predetermined amount of glue has been applied. This takes metering when assembling small parts.

Conventional applicators normally work require two valves: one to apply vacuum, the second to apply positive pressure. Piezo valves are much more accurate, faster and efficient, controlling pressure and vacuum with one valve.

Polishing wafers. Piezo valves are highly accurate and can quickly reach preselected setpoints. This makes them ideal for semiconductor applications where there is ample need to precisely meter small amounts of air to precisely machine the workpieces. When polishing wafers, for example, each wafer must be pressed against a rotating polishing table with accurately controlled pressure. In one step of the process, several diaphragm rings are pressed onto the wafers with varying amounts of force. These rings must be controlled precisely in terms of both vacuum and pressure. Piezo valves combine both these functions in a single compact valve.

Medical ventilators. Mobile ventilators for medical use must be light, compact and operate for a long time on battery power. Many patients depend on these units for oxygen as they sleep, so the machine should make as little noise as possible. Piezo valves are already being used in these machines for their durability, accuracy, small size and power needs, and quiet operation. 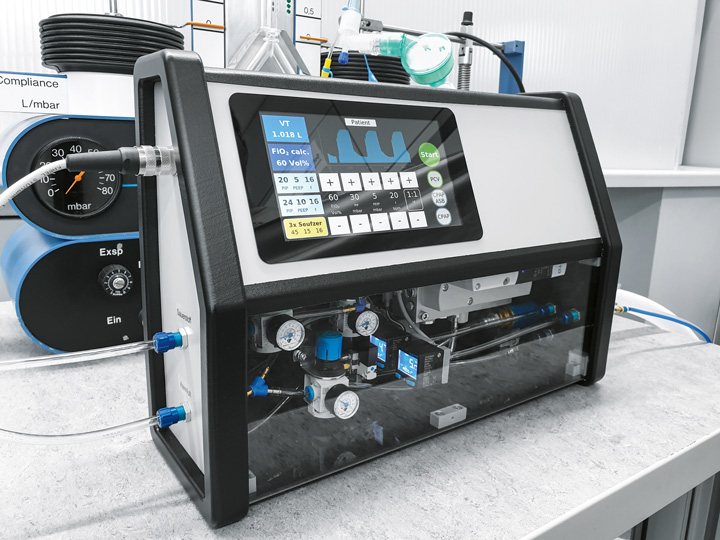 This Festo prototype for an emergency ventilator is based on piezo proportional-control-flow valves.

Surgical ophthalmology. Piezo valves control pneumatically powered tools used in cataract surgery, one of the most common surgical procedures. This surgery is the only treatment for cataracts, the progressive or age-related clouding of the eye’s lens. In the operation, the patient’s clouded lens is removed and replaced with an artificial intraocular lens (IOL).

The surgical tools used are operated pneumatically. Piezo valves control pressure and vacuum and are crucial for handling various liquids, including aqueous humour (the natural fluid in the eye) and substitute solutions (infusions). Piezo valves precisely meter and regulate the flow when replacing the aqueous humour.

Car-seat comfort. Piezo valves are hard a work silently filling and emptying air cushions underneath drivers and passengers. This makes the ride more comfortable. Air bladders built into seat side panels and backrests are filled as appropriate to the driving situation. The change in air pressures sent to various inflatable pillows is based on steering angle, lateral acceleration and travel speed. For example, the system inflates air chambers on the right side of the backrest more during left turns.

Thanks to their laundry list of properties, piezo valves are finding new uses in new and old products.

A Variety of Valves

Piezoelectric valves are versatile and can handle a wide variety of functions. Here are some examples from Festo Corp.

2/2-way valve VEMR. These valves have interchangeable seat inserts which lets them be used in a wide variety of applications because their pressure and flow rates are determined by the seat diameter. In oxygen therapy devices, for example, VEMR valves closely control oxygen supply and metering during inhalations. Combing a VEMR valve with a flow sensor creates a proportional flow control valve. Two VEMR valves can be used with an additional pressure sensor and control electronic as a proportional pressure control valve. 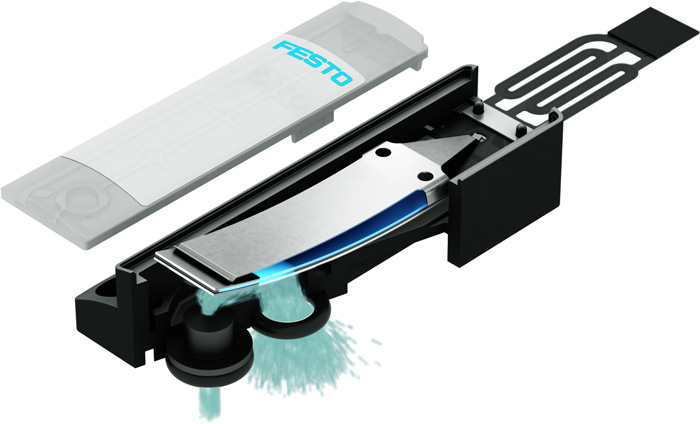 3/3-way valve VEMC or VEMP. These valves are known as gap-transducer valves. They incorporate a special bender actuator that uses differential movements to compensate for temperature-related errors. VEMC and VEMP are used in medical drainage devices but can also be used as switch valves to select between two different flow rates. VEMC and VEMP valves can be combined with a flow sensor and electronic control to create a proportional pressure regulator. 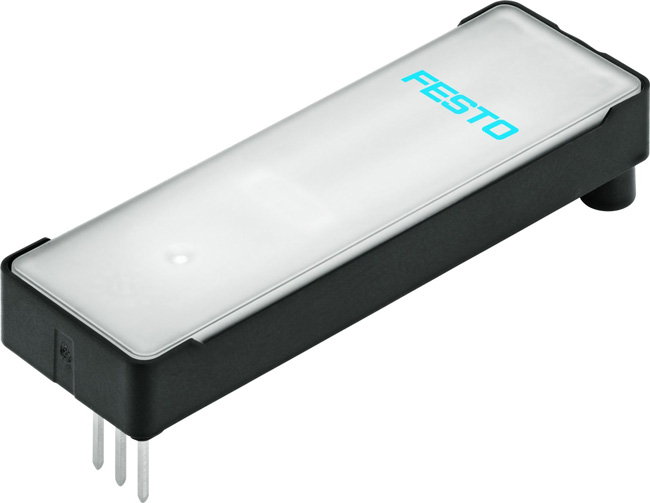 3/3-way valve VEAA. This valve, also known as a rocker transducer valve, has a trimorph transducer which lets it move in two directions, thus closing port P or R. Its range of vacuum supply pressure goes up to 12 bar, making it well suited for industrial apps with pressure regulation.

Directly controlled proportional pressure regulator VEAB. These are fully-fledged proportional valves which provide an output pressure via an integrated electronic unit with a pressure sensor. The setpoint can be specified as a voltage of 0 to 5 V or 0 to 10 V, or a current of 4.to. 20 mA. The valve also generates a reference signal in the same range. The valve is compact for its flow rate of about 20 liters per minute, has response times of less than 10 msec, is highly accurate at regulating pressure, consumes little power and emits no switching noises.