Compatibility of sensor-based weapons systems across different branches of the military has long been a goal if not a reality. It’s especially critical as electronic systems grow in complexity in response to emerging threats. Efforts at compatibility among different command, control, communications, computer, intelligence, surveillance, and reconnaissance (C4ISR) systems have spawned a large number of standards that serve as design guidelines for specific systems, but not across a wide range of applications.

The U.S. Army, Navy, and Air Force are hoping that will change for future weapons systems, notably as part of electronic-system modernization efforts, through the development and application of an open C4ISR embedded computing weapons system standard format—the Sensor Open System Architecture (SOSA).

The U.S. military has long sought to move away from the enormous expense and challenge of developing specialized, custom electronic systems and toward the use of commercial-off-the-shelf (COTS) components and subsystems plus the economy of low size, weight, and power (SWaP) design practices. The challenges to developing a common standard, or even a group of common standards, stem from the many different contractors and suppliers involved in the effort. Even a single difference, such as a power-supply voltage, throws up a roadblock to compatibility.

SOSA has been in development for several years, with the three armed-forces branches formulating versions of an open standard largely based on the OpenVPX standard introduced by Mercury Systems in early 2009. The OpenVPX standard covers precise definitions for the parameters of a modular electronic system, including its chassis, slots, and the modules that slide into those slots to establish different functions.

The parameters of the OpenVPX standard are available to the public and to any electronics manufacturer interested in competing on military electronic programs and systems development. The goal with using OpenVPX is to provide systems and modules that are fully compatible with all other hardware and software built for similar systems.

The SOSA standard is being developed so that modules such as digital signal processors (DSPs), field-programmable gate arrays (FPGAs), and single-board computers (SBCs) need not be customized for specific interface requirements, such as for different VITA interfaces. Instead, SOSA modules can be interchanged across high-speed, high-power C4ISR electronic weapons systems in response to changing threats without losing functionality or performance.

To make such compatibility possible, SOSA is being created with elements of different OpenVPX VITA standards, such as VITA 65, 46, 48, 48.2, 62, and 49.2. An open standard like SOSA makes it possible to achieve multiple-threat defensive capabilities in limited space, e.g. in unmanned aerial vehicles (UAVs), using systems that can be designed to meet the challenging SWaP requirements of UAV applications.

The SOSA technical standard is still in its developmental stages, with parameters being defined and refined even as electronic suppliers design “demonstrator” systems and modules to investigate performance and compatibility among different operating conditions. SOSA is an attempt to achieve high-performance, high-speed digital communications performance with agreement among the three service branches on modular system parameters, such as voltage supply, cooling approach, connector types, and mechanical tolerances, needed for compatibility among systems produced by many different vendors. Compatibility will help to speed, simplify, and reduce the cost of modernizing C4ISR systems.

OpenVPX, one of the many modular systems standards used by the services, has also served as a starting point for developing SOSA standards. Designers of many demonstrator SOSA system backplanes and chassis, for example, employed OpenVPX VITA 66 or VITA 67 profiles for compatibility with other embedded computing systems based on those profiles.

To be described as what the industry calls “SOSA-aligned” products, they must undergo compatibility testing under different operating conditions to ensure they operate as expected within different systems and with equipment from different vendors. The SOSA standard is being created under the guidance of The Open Group and its SOSA Consortium. The development process features the efforts of military and industrial working groups, including the U.S. Department of Defense (DoD), prime contractors, and electronics manufacturers.

Although still in development, the first version of the standard is expected to be released by mid-2020. The SOSA standard is an opportunity for the three services to reach agreement on the electronic backplane and module needs of their future weapons systems. As an open standard, SOSA’s specifications are available to all consortium members, enabling interested manufacturers to access specifications when developing hardware and software for SOSA mainframes and modules.

SOSA isn’t the first attempt at an open embedded computing standard designed to aid multiple branches of the armed forces, and it’s not intended to leave previously developed standards behind. A single-page, January 2019 memorandum from tri-service secretaries clearly stated the need for a Modular Open Systems Approach (MOSA) to all future weapons systems. A MOSA would support all standards, such as SOSA, that enable the design and development of compatible weapons systems. Other open standards covered in the MOSA memo, and under the sponsorship of The Open Group, are the Future Airborne Capability Environment (FACE), Vehicular Integration for C4ISR/EW Interoperability (VICTORY), and C4ISR/EW Modular Open Suite of Standards (CMOSS).

MOSA isn’t meant to be a single standard for all electronic weapons systems, but rather serve as an umbrella for multiple standards, enabling interface capability and compatibility among them. Tri-service specifiers have long relied on systems developed according to many different standards, and MOSA isn’t expected to bundle just four open standards.

The Army, Navy, and Air Force are aware of the limitations of an aging inventory of weapons systems and have embarked on numerous modernization programs. For example, the Army’s Future Attack Reconnaissance Aircraft (FARA) competition seeks a MOSA approach to the development of FARA avionics systems and an armed reconnaissance helicopter as part of a massive replacement of aging AH-64 Apache helicopters. The Army’s Future Vertical Lift (FVL) program is targeting a SOSA-compliant SBC card module, with the Army’s Joint Multi-Role Technology Demonstrator (JMR-TD) program designed to encourage the development of next-generation weapons systems, including rotary-wing and tilt-wing aircraft (Fig. 1).

1. The Bell V280 Valor is one of the aircraft being considered by the U.S. Army as a next-generation rotary-wing aircraft, outfitted with SOSA-compatible electronic systems. (Courtesy of Bell Textron)

The Army’s efforts at modernizing its rotary-wing aircraft (by 2028) also include building FARA and Future Long-Range Assault Aircraft (FLRAA), which will also involve integration of SOSA-compatible weapons systems. Another development program, the Air Force Research Laboratory’s AgilePod T program, is targeting an ISR module with an open architecture compatible with SOSA.

Crafting an acceptable early SOSA standard will take time and effort, and it will involve the design of various SOSA-compliant modules and assemblies termed as “snapshots” of possible solutions for electronic products meeting the open standard. One of the challenges in developing a successful SOSA standard is arriving at an open architecture that can serve all three branches of the military for at least a 30-year life cycle. Thus, the path to finding a working SOSA standard will require investments from all parties. This includes the creation of many “demonstrator” systems, which will show that an open standard makes it possible for different products, such as SOSA modules, to operate seamlessly under all operating conditions faced by weapons systems.

The first version (V1) of a SOSA standard is expected from The Open Group later this year. Companies supporting the SOSA architecture according to different tri-service programs, such as Abaco Systems with its 3U “SOSA-aligned” SBC3511 SBC module targeting the Army’s FVL program (Fig. 2), will have much to do with the refinement and finalization of a first SOSA open-standard version. 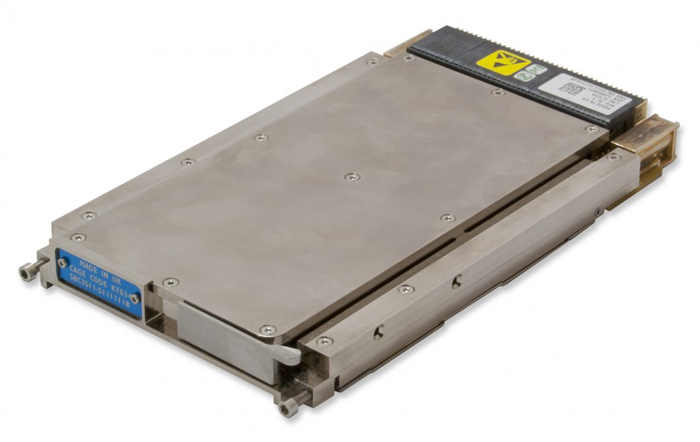 2. The SBC3511 is a 3U SOSA-aligned module developed for the U.S. Army’s FVL program. It’s also compatible with CMOSS and HOST standards. (Courtesy of Abaco Systems)

The SBC3511 features an OpenVPX payload profile that’s aligned to the SOSA, CMOSS, and HOST standards. It can operate at speeds to 2.8 GHz and to 4.4 GHz with TurboBoost and comes with as much as 32 GB DDR4 RAM and up to 256 GB of NVMe SSD. The SOSA SBC has a 40-Gb/s Ethernet data plane, extensive security features, and a thermal design that effectively dissipates heat even in space-constrained systems.

Interest in attaining a usable SOSA standard for the three armed-forces branches has encouraged the teamwork of Open Consortium members. At the AUSA 2019 event in Washington, D.C., Pentek, Herrick Technology Laboratories, and Kontron showed a SOSA-aligned C4ISR demonstrator system with contributions from all three companies. It gave visitors to the exhibition a chance to see the effectiveness of the SOSA open standard when operating with “plug-and-play” cards from different suppliers.

Based on the OpenVPX backplane, the system combines a Herrick 3U flight-qualified chassis with a Kontron VX305C-40G SBC (Fig. 3) and a Pentek model 71813 XMC board as an embedded computing starting point for EW, communications, and signal intelligence (SIGINT) applications. Elma Electronic was also part of a multiple-vendor OpenVPX/SOSA demonstrator at the AUSA 2019 event. 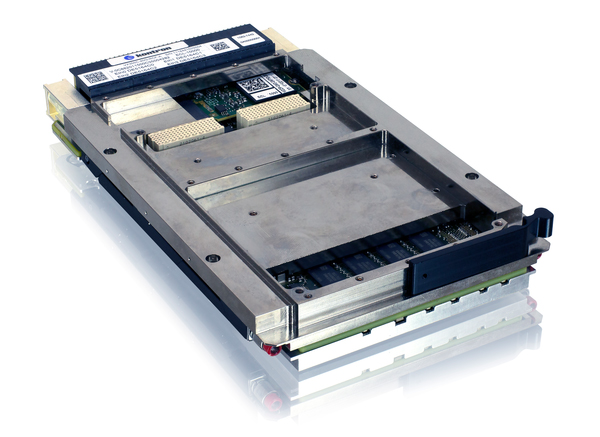 3. The VX305C-40G is a 3U SBC that was part of a SOSA-aligned C4ISR demonstrator system on display at the recent AUSA 2019 show. (Courtesy of Kontron)

Given the desire of the Army, Navy, and Air Force to modernize weapons systems during the next several years, interest in the SOSA standard is high across the industry, with many OpenVPX cards being adapted to SOSA requirements. The list of manufacturers for SOSA-aligned products is growing quickly and includes innovative suppliers such as Annapolis Micro Systems, Concurrent Technologies, Curtiss-Wright, Pixus Technologies, and Spectranetix.

For example, the model SX-430 EW transceiver card (Fig. 4) from Spectranetix has been a plug-in part of at least one of the SOSA demonstrators, providing the kind of wideband performance to make it a candidate for a host of defense-related applications. The software-defined-radio (SDR) full-duplex transceiver is aligned to the CMOSS and SOSA standards with an RF/microwave range of 1 MHz to 18 GHz and intermediate-frequency (IF) range of 40 to 160 MHz. As SOSA spreads, the SX-430 is likely to be found plugged into modular systems for all three service customers.

4. Model SX-430 is an SDR-based EW transceiver card that’s aligned to CMOSS and SOSA standards and has been a part of several C4ISR SOSA demonstrators. (Courtesy of Spectranetix)