One-Port VNA Calibration: A Look Under the Hood

This article appeared in Microwaves & RF and has been published here with permission.

Directivity error is mostly due to leakage in the bridge. Some amount of incident signal causes a small erroneous response on the reflection port. A typical raw bridge directivity might be anywhere from 15 to 40 dB. The source match represents the error in the source impedance of the VNA. The output source match is never perfect and is made somewhat worse by the cable connector and the test cable. A typical raw source match for a VNA might be 20 dB.

The reflection tracking error is basically the frequency response of the reflected signal from the DUT into the VNA and out through the reflection port of the bridge. This includes the loss incurred in the test cable and looks like a small value at low frequencies, increasing to several decibels at higher frequencies.

Figure 1 depicts a network-signal flow diagram with the three error terms included. A few simple manipulations of this diagram yield the formula for the measured value as a function of the DUT reflection coefficient and these three error terms.

1. Shown is a network-signal flow diagram with the three error terms included.

Note that b2/a2 is our measured reflection coefficient and b1/a1 is the actual reflection coefficient of L. We want to know b1/a1 while measuring b2/a2. This can be simplified with network flow-graph manipulations. For those unfamiliar with the technique, it involves only a few simple rules and an understanding that the math works only in the direction of a flow-graph arrow. For instance, from Figure 1, one can say that b2 = R * b1. It is NOT true that b1 = b2/R. 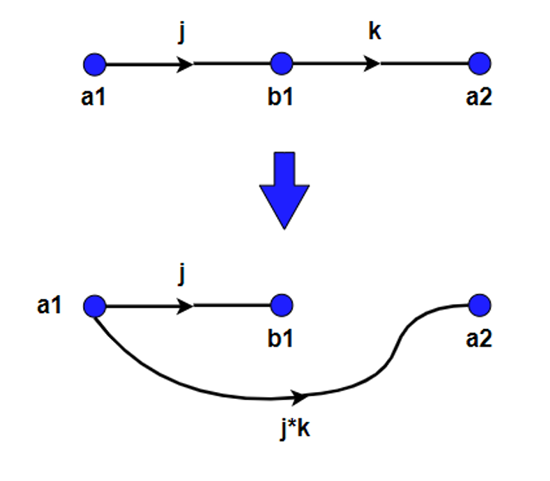 The next rule is the “Parallel Rule”: Because both branches “j” and “k” point in the same direction, their contributions may be combined as shown in Figure 3. 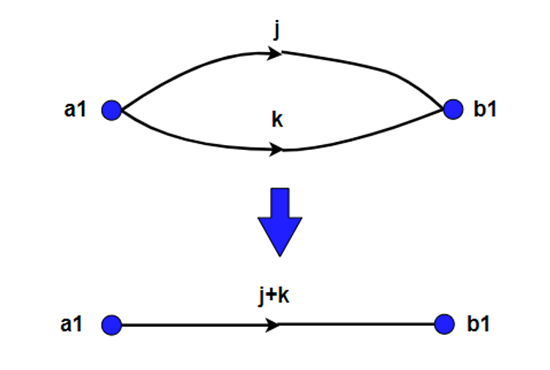 3. Here, we see illustrated the parallel rule: Because both branches “j” and “k” point in the same direction, their contributions may be combined as shown.

The next rule is the “Self-Loop Rule”: The loop is created by virtue of the Series Rule as the path from a1 to b1 and back may be combined (Fig. 4). This may not seem like a useful transform, but one more manipulation is possible. A network flow will always enter the loop. The loop may be removed, and its effect applied to that entering path as follows (Fig. 5). 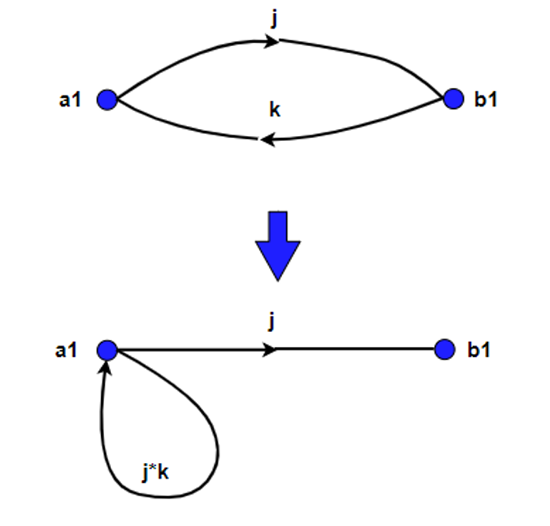 4. According to the self-loop rule, the loop is created by virtue of the series rule as the path from a1 to b1 and back may be combined. 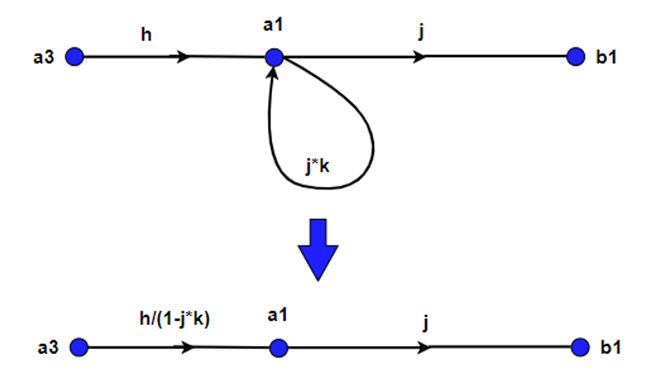 5. Application of the self-loop rule leaves one more possible manipulation: There will always be a network flow that enters the loop. The loop may be removed, and its effect applied to that entering path is shown.

This transform comes from the parallel rule:

If the arrow from b1 pointed to the left and entered the loop, then “j” would have to be replaced by:

These rules may now be employed to simplify Figure 1 such that all nodes are explicitly defined by the single independent node “a2.” The steps encompass the transformation depicted in Figure 6, followed by the application of series and parallel rules as shown in Figure 7.

6. These rules may now be employed to simplify Figure 1 such that all nodes are explicitly defined by the single independent node “a2.” First, as shown, the self-loop rule is applied to eliminate a branch.

7. Finally, the series rule is applied, followed by the parallel rule, to arrive at the simplification of Figure 1.

Finally, we see that our measured reflection coefficient is represented by:

We can solve this for L and obtain:

which is the result we were looking for.

Now, if we know D, R, and S, we can easily correct our Γm to obtain L, which is the actual reflection coefficient.

We now make three measurements of three known artifacts and solve a system of equations to obtain the D, R, and S error terms. In addition, we could make more than three measurements and perhaps improve our estimation of the error terms with a least-squares approach. Rather than write out those three equations, we’ll jump right to the matrix notation, which is much cleaner.

Any three artifacts with known reflection coefficients may be used if they’re sufficiently separated on the Smith chart at every frequency. If they’re not, the matrix calculations will be ill-conditioned and the results unreliable.

where H is the Hermetian transpose operator, or the matrix transposed with its entries conjugated.

It so happens that (CH * C)−1 * CH is a least-squares calculation. If our measurements are a little noisy, we can improve our results by making more known measurements. Simply add more rows to the C and V matrices. Matrix E will still have three values in the end and the results might be somewhat better in the face of slightly noisy measurements.

In this article, we introduced the three-term error-correction terms, and used a simple method of derivation to show how these error terms affect the measured value. Finally, we outlined a simple matrix method for easy calculation of one-port error correction to arrive at calibrated results from the error terms. None of this work is original, but it’s educational to pull all of the pieces together and demonstrate how they are used.