Laser plastic welding has grown in popularity for medical applications because it reliably joins a wide range of materials, including dissimilar materials. At the same time, the process uses no vibration energy, so it is gentle enough to bond plastic parts with thin walls, geometrically complex shapes, and embedded electronics or sensors. At the same time, it can provide a Class A finish. Laser welding is ideal for making medical products that require narrow, particulate-free fluid pathways. Thus, it is often used to make drug-delivery devices, in-vitro diagnostic (IVD) devices, glucose monitors, insulin pumps and similar applications.

Simultaneous through-transmission IR (STTIr) laser-welding technology, developed by Emerson, gives engineers new capabilities for welding plastic parts. That’s partly because it employs a series of laser-emitting diodes to heat the entire weld surface at once. This ensures precise heating and reduces the clamping force required to press parts together while the weld is made and then cools.

Traditionally when welding two plastic parts together, one part had to be “clear” or “transmissive,” which would let the laser pass through without causing warming; the other part then had to be “dark” or “absorptive” to be heated by the laser. This assured the applied laser energy would selectively heat the weld zone of the absorptive part. There, the heat softens the mating edges of both parts, letting them be brought together under compressive force into a clean, particle-free welded assembly.

Laser welding uses heat provided by a 980-nm laser generated by diodes. This light is concentrated through fiber-optic bundles connected to the weld tooling, then precisely aimed through wave guides (seen in circle view) along the part’s weld area according to the heating density required.Emerson

This new “clear-on-clear” laser process overcomes the traditional transmissive/absorptive part limitation by treating one of the two “clear” mating parts with a biocompatible laser absorber before laser welding. The absorber consists of microparticles of pigment dye or carbon black suspended in a carrier fluid such as isopropyl alcohol or acetone.

The absorber can be added to resin in the form of a masterbatch prior to molding, applied to molded parts using pad printing or, for maximum precision, applied to individual parts with ultrasonic spray-deposition.

Spray deposition relies on an ultrasonic atomizer that precisely deposits the  laser-absorbing dye on one of the mating parts, creating a spray pattern as thin as 0.5 mm.

When deposited using the right ultrasonic frequency and spray pattern, the carrier fluid essentially flashes off, leaving a precise pattern of laser-absorbing particles, one micron or smaller in size, on the surface of the thermoplastic. During welding, laser energy gets absorbed by these particles and consumes them, releasing heat that travels through the weld zone of the mating parts, which then become bonded together under compressive force.

Typical targets include the interior surface of tongue-and-groove joints and the interior surfaces of a “double V” joint on one of the mating parts. Precisely depositing the absorber within enclosed joints like these focuses the laser-generated heat needed to create the part-to-part melt and creates a “flash-trap” that contains the melt’s treated area, isolating it from any nearby microfluidic flow paths in the finished assembly. 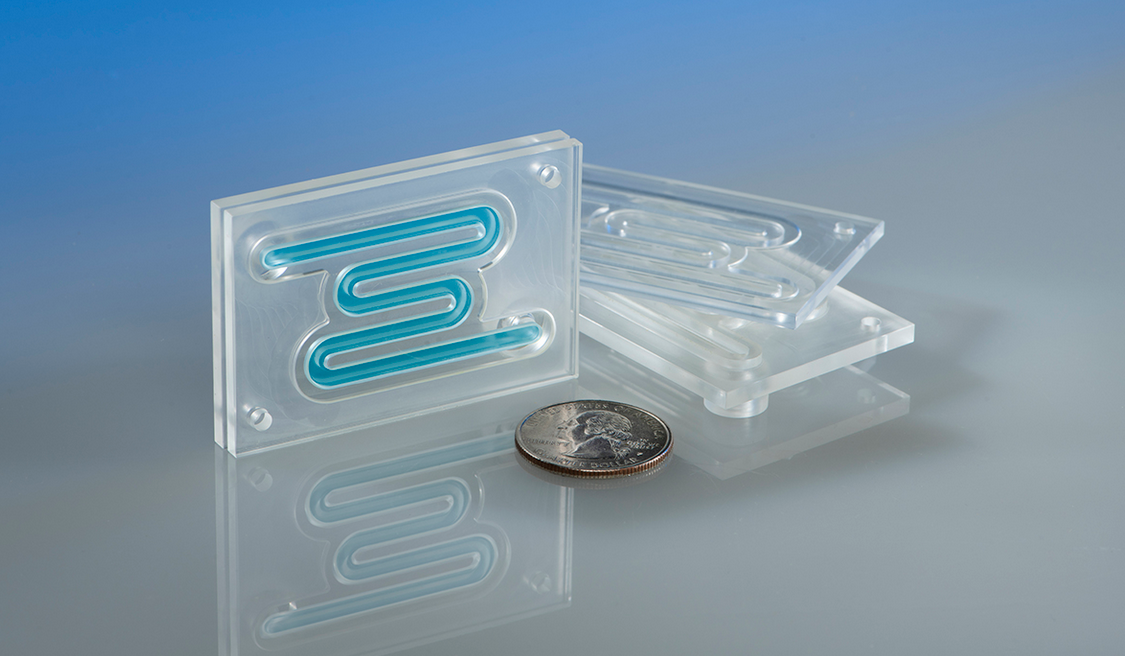 This new method of plastic laser-welding reliably produces complex fluid paths while maintaining superior aspect ratios in the submillimeter flow path pitch. Such precision is essential for microfluidic parts, which must be reliably bonded, yet maintain consistent dimensions along extremely small flow paths. 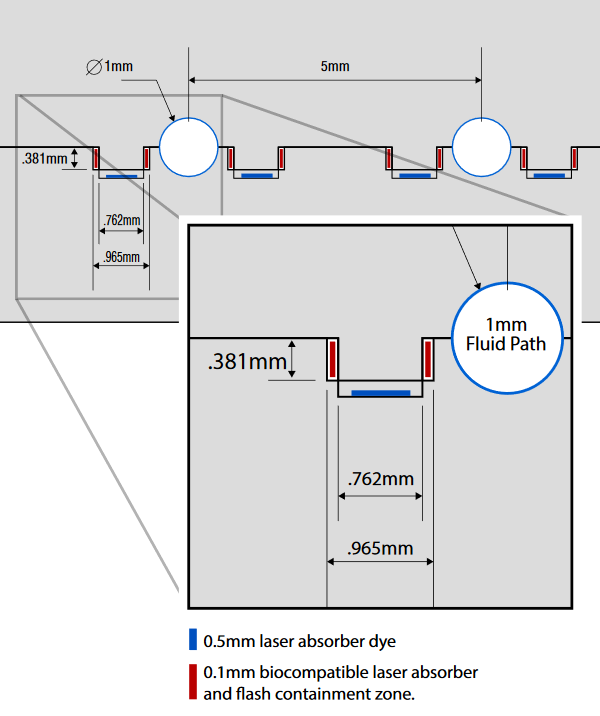 Two clear mating parts can be attached to one another using STTIr welding without destroying or blocking small, thin fluid pathways.Emerson

This new clear-on-clear laser-welding capability relies on equipment added to the STTIr process (i.e., the biocompatible laser absorber and ultrasonic spray deposition equipment) and it can be “bolted on” to many existing laser-welding applications. It delivers cycle times measured in seconds, making industrial-scale laser welding of medical-quality clear-on-clear microfluidic parts economically viable for the first time. And, since spray deposition can be adapted to coat several parts at once, both the spray-deposition and welding processes can be further scaled up to accelerate production throughputs.

The new process also joins a far greater range of clear thermoplastics, regardless of chemistry. Because the laser-absorbing pigment dye efficiently generates and conducts heat and melt, it can compensate for large differences in the glass transition temperatures (Tg) of different polymers used in mating parts.

A typical example of the process is its use on two clear plastic “coupons” or  injection-molded parts that mate to form a serpentine flow path like those found in a host of medical devices. The coupons will become the “absorptive” half of each assembly, so they are placed in the spray deposition equipment for a coating of the laser absorber. 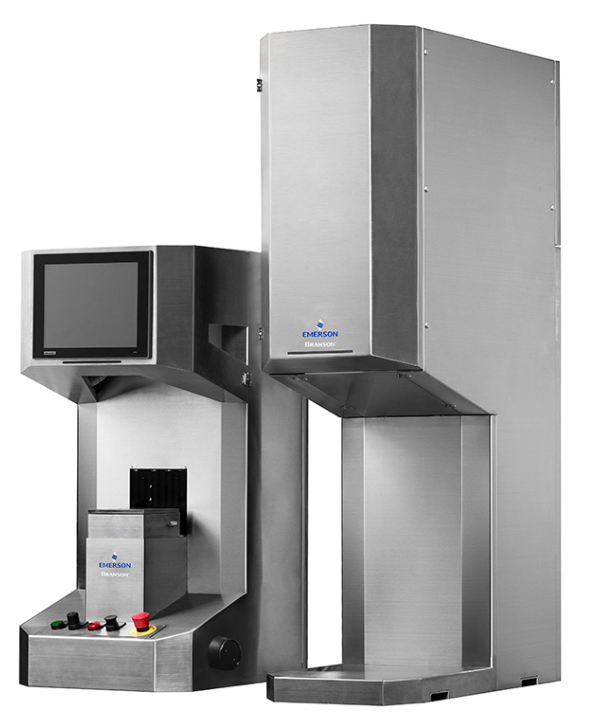 The Branson GLX Micro laser welder from Emerson is the smallest of five units in the GLX Series. The welding unit (left) features a color touchscreen, a lift table measuring 150 × 150 mm, and clamp forces up to 0.05 kN. These make it an excellent choice for welding microfluidic parts for medical applications. The unit at right contains the laser source and power supply.Emerson

From there, parts are transferred to the laser welder (see photo above), which makes a clear-on-clear, laser-welded part. For medical or IVD devices that demand optically clear flow paths, the technology is invaluable. It simplifies everything from automating blood cell counts in capillary-sized fluid paths to providing visual validation to technicians that a microdose of a powerful therapy is being properly administered to a patient.

The Benefits of Laser Welding

Laser welding offers a range of important benefits to product assembly operations, including:

Superior aesthetics. Manufacturers increasingly use laser welds for their aesthetics because they are precise and flash-free. Weld lines are virtually invisible.

Ultra-cleanliness. Laser welding produces no flash or particulates. It’s a cleanroom-capable process that’s equally at home on any production floor.

Priyank Kishor is a global product manager for Branson laser welding and other non-ultrasonic products at Emerson.