Beam steering systems have been used for many years for applications such as imaging, displays and optical trapping, but they require bulky mechanical mirrors and are overly sensitive to vibrations. Compact optical phased arrays (OPAs), which change the angle of an optical beam by changing the beam’s phase profile, are a promising alternative for many new applications.

These include ultra-small solid-state LiDAR on autonomous vehicles; much smaller and lighter AR/VR displays; large-scale trapped-ion quantum computers to address ion qubits; and optogenetics, an emerging field that uses light and genetic engineering to study the brain.

Long-range, high-performance OPAs require a large beam emission area densely packed with thousands of actively phase-controlled, power-hungry light-emitting elements. To date, such OPAs for LiDAR have been impractical because they require too much electrical power.The new technology that enables our chip-based devices to point the beam anywhere we want opens the door wide for transforming a broad range of areas.

Researchers at Columbia Engineering led by Professor Michal Lipson developed a low-power beam steering platform that is a non-mechanical, durable and scalable approach to beam steering. They were among the first teams to build a low-power large-scale OPA that operates at near-infrared wavelenghs,and were the first to build an OPA on-chip that uses blue wavelength.  These could find use in autonomous navigation and augmented reality, respectively.

Working with a group at Washington University in St. Louis, the team also developed an implantable photonic chip based on an optical switch array at blue wavelengths for precise optogenetic neural stimulation.

“This new technology that enables our chip-based devices to point the beam anywhere we want opens the door wide for transforming a broad range of areas,” says Lipson. “These areas include making LiDAR devices as small as a credit card for a self-driving car, or a neural probe that controls micron scale beams to stimulate neurons for optogenetics neuroscience research, or a light delivery method to individual ions for quantum manipulations and readout.” 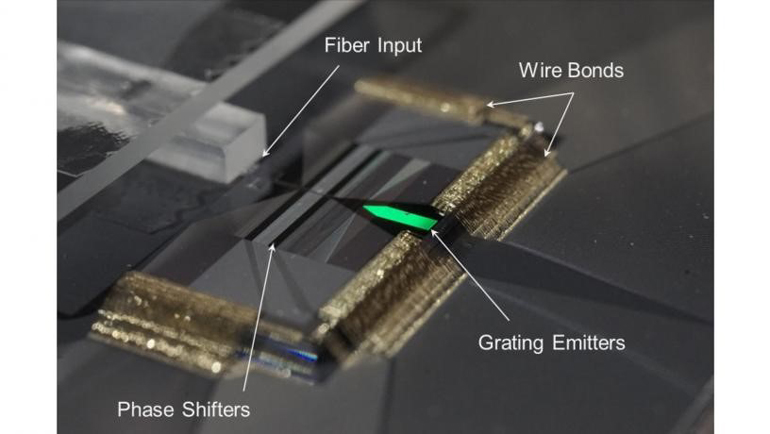 Here’s a design for a packaged large-scale optical phased array for solid-state LiDAR.

Phased array devices were initially developed for larger electromagnetic wavelengths. By applying different phases at each antenna, researchers can form a very directional beam by adding constructive interference in one direction and destructive in other directions. To steer or turn the beam’s direction, they delay light in one emitter or shift a phase relative to another.

Current visible light applications for OPAs have been limited by bulky table-top devices with limited fields of view due to their overly wide pixels.

“As wavelengths becomes smaller, the light becomes more sensitive to small changes such as fabrication errors,” says Min Chul Shin, a Ph.D. student on Lipson’s team. “It also scatters more, resulting in higher losses if fabrication is not perfect—and fabrication can never be perfect.”

A major challenge for the researchers was working in the blue range, which has the smallest wavelength in the visible spectrum and scatters more than other colors because it travels as shorter, smaller waves. Another challenge in demonstrating a phased array in blue was that to have a wide angle, the team had to place emitters half a wavelength apart or at least smaller than a wavelength—40 nm spacing—which was difficult. In addition, to make the OPA useful, they needed many emitters. Scaling this up to a large device was even more difficult.