Not sure if I need a T-shirt with “I survived Embedded World 2020,” but it’s one of the few recent tradeshows that wasn’t cancelled due to the coronavirus. Attendance was down and many of the major chip vendors, such as NXP and Silicon Labs, weren’t there. One hall was shut down and the venues had a lot more open space (Fig. 1). On the flip side, there were actually places to sit for lunch and I had a chance to talk with a lot of vendors that did attend.

1. There were more and larger open areas to make up for companies that decided not to attend Embedded World this year.

There was a plethora of announcements, but I’m going to concentrate on those that I actually saw at the show. One of the more impressive boards was VersaLogic’s Grizzly (Fig. 2). It’s part of the company’s embedded server series and features an Intel C3958 16-core processor spec’d for −40 to +85°C operation. It has IPMI 2.0 support as it also sports a pair of 10-Gb Ethernet SFP+ ports. Two 1-Gb Ethernet ports are built-in as well, one of which supports Power over Ethernet. 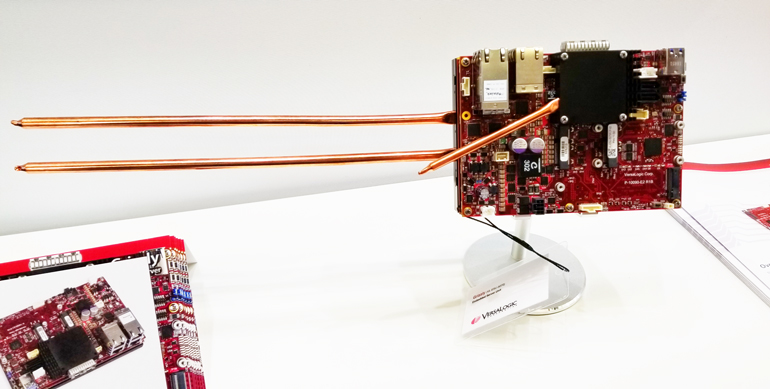 2. Versalogic’s Grizzly is shown here with a set of optional heatpipes that can be useful in deeply embedded systems.

The board stack includes up to 128 GB of ECC memory. There are four SODIMM sockets, but only a pair are field-upgradeable. The other two are factory-installed since they’re in the middle of the stack.

Also in the mix are two Mini-PCIe sockets and an M.2 site that allow for expansion and on-board storage. VersaLogic has a bunch of peripheral boards that plug into the Mini-PCIe sockets; a number of vendors have delivery boards in this form factor. Likewise, M.2 with PCIe x4 support has become the storage form factor of choice for rugged applications, although this board still has SATA 3.0 ports for SSDs and hard drives. Serial ports, USB 3.0 ports, and digital ports round out the peripheral interfaces.

The COM Express Extended form factor board features on-board power conditioning that handles input voltages from 10 to 30 V. It is MIL-STD-202H qualified for high shock and vibration operation.

I’ve covered and done hands-on reviews for most of the BeagleBoard boards to date. The latest is the BeagleBone AI (Fig. 3). The module is based on Texas Instruments’ AM5729 SoC. It has a pair of 64-bit Arm Cortex-A15 cores, dual C66x floating-point VLIW DSPs, two Cortex-M4s, and four Embedded Vision Engines (EVEs) designed to distribute machine-learning (ML) chores. 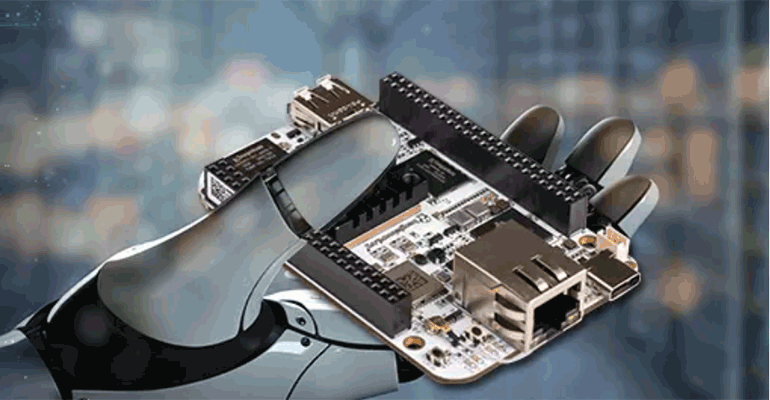 3. The BeagleBone AI can run neural-network models on different processor and hardware accelerators depending on how a developer wants to balance power use, performance, and headroom.

The display subsystem can drive 1080p displays at 60 frames/s. This includes a video-processing engine and support for an HDMI 1.4a- and DVI 1.0-compliant HDMI encoder, 2D (Vivante GC320 core) and 3D (dual core PowerVR SGX544) graphics support, plus multiple input ports including three video input ports (VIP) and output ports. The DMA engine manages up to three pipelines. The IVA-HD subsystem and 4K encode at 15 frames/s with H.264 codec support. It handles other codecs at 1080p up to 60 frames/s.

The demo at the show was driving a robot arm that picked up and moved blocks with photos on the front. The images were being captured by a USB camera and analyzed by on-chip ML models. The software can handle models from popular frameworks like TensorFlow.

Octavo Systems was showing off its STMicroelectronics STM32MP1-based OSD32MP1, which is now shipping. It uses Octavo’s system-in-package (SIP) technology. The 18- × 18-mm SIP adds 1-GB of DDR3L memory and 4 kB of EEPROM. The SoC includes a dual-core, 650-MHz Cortex-A7 and a 209-MHz ARM Cortex-M4. STMicro also has certified the STM32MP1 with Arm’s Platform Security Architecture (PSA).

I didn’t originally schedule a meeting with MIOTY Alliance, but I had a few open slots due to cancellations, so I got to hear about their ETSI-compliant Massive IoT protocol for long-range, low-power WANs (LPWANs). We will be covering this standard in more detail in future articles. It’s designed for large-scale deployments that have millions of nodes. These nodes are designed to emit a few bytes over decades from battery-powered devices. It competes with the likes of NB-IoT and LoRaWAN. Range is 5 km in urban areas and up to 15 km in open areas.

MIOTY is based on work done by Fraunhofer. It uses forward error correction along with telegram splitting to spread data across time and frequencies. That means only the transmitted data needs to be received to recover the data stream.

We still need to wait to see the initial platform, but Seeed and Altium are working to make Altium’s Gumstix Geppetto a web-based design-to-order (D2O) system. I’ve covered Geppetto in the past. It allows a developer to create a board design using a drag-and-drop framework. The result, after a $2K investment, is a stream of completed boards within a week or so. By complete, we mean documentation, packaging, and PCBs with all of the components installed. Board costs are based on quantity, but that can be under a dozen or hundreds. The Geppetto is a bargain by the way.

The Seeed partnership will allow Seeed to build your Geppetto-designed boards. “Exciting new electronics are being conceived by programmers who are putting their innovative software in specialized devices,” said W. Gordon Kruberg, M.D., head of Modular Hardware, Altium LLC. “We are thrilled to be working with Seeed to put Geppetto’s power of authorship and design in the hands and minds of this new generation of makers.”

I also got to talk with LDRA about its latest announcements. This includes integration of the LDRA tools with Atlassian’s Jira Software agile development tools. LDRA is also joining forces with Intland to address critical embedded software development and verification.

What I was mainly interested in, though, is the added support for MISRA C:2012 and the newly mandated compliance guidelines. If you really need to program in C, then please take advantage of this type of support. C inherently lacks a way to reduce errors, unlike Ada or SPARK. Even C++ offers more tools to reduce programming errors, such as better type enforcement. MISRA C can significantly reduce common errors.

On today’s agenda is a host of meetings with test-and-measurement companies. It may take me a little longer to write up those announcements, but stay tuned—there’s still lots more to come from the show.