Nearly 100 years ago, a patent was filed on the forerunner of today’s miniature circuit breakers commonly used by industry today. Fuses date back even further to the early days of electric lighting and telegraphy, with first patent on one filed by Thomas Edison in 1890.

Since then, both types of electrical circuit safeguards have evolved into thousands of different makes and models, depending on their application requirements. These including amperage/voltage ratings, i2t (motor overload/thermal) protection, breaking capacity, and time-current speeds.

Unfortunately, as much as these circuit protections have proven themselves over many decades of use, their features and capabilities aren’t keeping pace with the growing electrical complexities of modern production facilities and other increasingly sophisticated industrial and commercial applications. That’s especially true in the case of plants adopting and implementing the advanced electrification, automation, and digitalization concepts of Industry 4.0.

For example, with a fuse or miniature circuit breaker installed in a multi-circuit system powering different device loads, an overload or short circuit in just one circuit can interrupt the entire power supply, resulting in a current undersupply or failure of the entire 24-V power-supply system. This can shut down connected production systems, with impacts on a producer’s costs, quality, cycle times, and delivery commitments to customers.

Now consider the case of miniature circuit breakers with high current consumption. In order to trip within a few milliseconds, they require several times the circuit’s rated current. This momentary high current demand means that electrical engineers must account for a circuit’s line resistance, which is proportional to its length and diameter. As a result, fast tripping is only possible up to certain cable lengths and larger cable cross-sections. In addition to the line resistance, the overall circuit design (e.g., contact resistances at terminals) must be considered when configuring miniature circuit breakers.

Figure 1 shows how a power supply and miniature circuit breaker can behave in the event of a fault. The short circuit in the third load circuit prompts the power supply to deliver maximum tripping current to that circuit—but with a delayed trip in the faulty circuit while also causing an undersupply to the other circuits. Problem is, even a few milliseconds of undersupply can bring a system to a standstill. With a programmable logic controller (PLC) as part of a control circuit, current interruptions as low as 20 ms can be critical.

1. Miniature circuit breakers may be insufficient to prevent system shutdowns because tripping current can cause adjacent branch circuits to be critically undersupplied.

In contrast, selectivity protection modules, such as Siemens’ SITOP PSE200U or the recently introduced SITOP SEL1200/SEL1400 models, can distribute load currents independently across several 24-V dc load circuits, then monitor those circuits for overload and short-circuit conditions. The selectivity modules were designed specifically with power supplies in mind.

So, in case of an overload or short circuit, only the affected circuit is electronically tripped. This protects its load from the potentially destructive impacts of excessive current, while continuing to provide 24-V power and reliable protection to the other load circuits. This reduces downtime and ensures high availability of production assets. These devices facilitate integration in system diagnostics, along with common signaling contact capabilities, single-channel signaling, and remote reset capabilities.

Selectivity protection modules also provide flexibility in managing inrush currents during the switch-on of individual circuits. In effect, this can reduce total current peaks that can cause voltage dips, potentially resulting in system faults.

Sequential connection delays of individual 24-V dc load circuits that reduce inrush current spikes can be either time- or load-dependent (Figs. 2 and 3, respectively). In both cases, power supplies with lower-rated current outputs can be used. 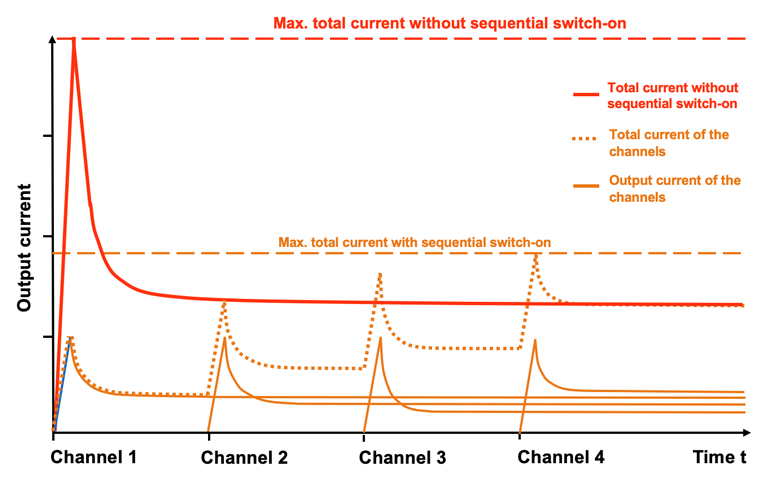 2. Time-dependent circuit-connection delays can avoid output current spikes that could lead to voltage dips, which may result in system faults. 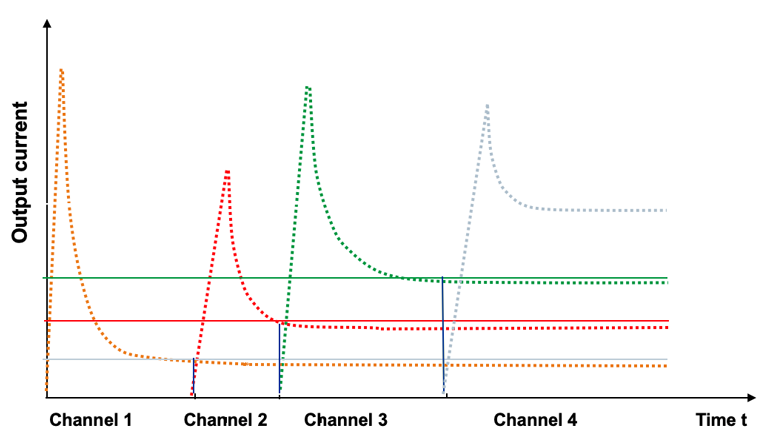 3. Load-dependent circuit-connection delays can avoid output current spikes, automatically connecting each subsequent channel as soon as the inrush current of the channel falls below the set value.

Selectivity protection modules can also be deployed in compliance with NEC Class 2 (UL 508A § 2.7) standards to protect 24-V dc individual load circuits supplied by switched-mode power supplies. The individual setting of the tripping current enables optimum adaptation to the respective control circuit. The configuration work is minimal since the cutoff characteristic always guarantees reliable tripping—even with high line impedances. The output power is also limited to a maximum of 100 W per channel even with a short circuit.

Using selectivity protection technology to engineer and implement NEC Class 2 control circuits delivers one big benefit: Instead of having to use multiple NEC Class 2-rated power supplies that are 100 W (e.g., a 10-A Siemens SITOP PSU8200). That’s because the PSE200 selectivity module downstream of the power supply is NEC Class 2-rated, which will distribute and limit the current to each load circuit within the NEC Class 2 requirements. As a result, this leads to fewer components, less complexity, less wiring time, and possibly a smaller control panel enclosure, all of which can lead to potential cost savings (Fig. 3, again).

The NEC Class 2 selectivity module also has another important function: The electronics continuously monitor the 24-V dc input voltage. As soon as the 24 V dc threatens to fail, the path with a higher current than the set current is disconnected immediately. All other circuits continue to be supplied without interruption. Even PLCs, which can only bridge power failures for a few milliseconds, continue to run without problems.

As an advanced centralized digital power source, the Siemens SITOP PSU8600 power-supply system offers a NEC Class 2 expansion module with the same functions as standalone selectivity protection modules. It has eight outputs with a rated current of 2.5 A at 24 V. In addition to the typical control voltage of 24 V, each output can be adjusted between 4 and 28 V, thus supplying loads with other rated voltages while complying with NEC Class 2. The power-supply system features an Ethernet/PROFINET interface that makes a wide range of settings and diagnostics possible, including those for the NEC Class 2 outputs.

Siemens indicates that its selectivity modules provide easy integration into S7 diagnostics as well as in higher-level control, operator control, and monitoring systems. Downtimes can be reduced by the direct assignment of faulty channels using SIMATIC S7 function blocks in Step 7 or TIA Portal programming frameworks.

This remote diagnostic capability can be especially valuable in identifying circuit issues—wire breaks or connection interruptions, for example—in large and complex plants where doing so can be especially difficult and time-consuming. In addition, plant operators can save wiring costs and efforts because only one digital input of the PLC is required.

Profitability and competitive pressures are compelling more and more plant operators to upgrade their production assets—and OEMs to upgrade their machines—to the Industry 4.0’s advanced concepts of electrification, automation, and digitalization. Many operators and OEMs may continue to use industrial fuses and miniature circuit breakers to protect electrical circuits.

Forward-thinking operators and OEMs, however, should weigh the costs of inadequate circuit protection—downtime of their production assets and resulting disruptions to work-in-progress and delivery schedules—and consider the advantages of upgrading to selective electronic circuit protection technology with fast-fault detection.

Gregory Kateb is a SITOP power-supply business developer for Siemens.