Marvell Technology, trying to further transform itself into one of the world’s largest vendors of network infrastructure chips, rolled out its latest line of Octeon networking chips to meet the throughput and latency demands of 5G telecom equipment. Marvell said it hammered out deals with telecom gear vendors, including Nokia and Samsung, to supply the Octeon chips for use in 5G base stations.

The company introduced the first chip in its latest generation of Octeon Fusion chips, the CNF95xx, which is targeted at the 5G infrastructure market. The chip incorporates a range of hardware accelerators for secure networking, baseband processors, and programmable DSP cores, ideal for 5G networks that offer far faster data transfers than 4G technology. Marvell said it is currently the only merchant silicon on the market for 5G base stations.

Marvell said the new Octeon Fusion chips pump out more performance per watt than its predecessors while also supporting the millimeter waves bands used in 5G networks. The chip can be used in macro base stations with antennas and other hardware that beam out signals over long distances. The chip can also be used for massive MIMO, which is used to transfer data through targeted 5G beams, speeding up data rates and lifting throughput.

The Santa Clara, California-based company is attempting to become a global powerhouse in chips used in 5G networking gear. Marvell is looking to gain ground with the world’s top players, including Ericsson and Nokia, which accounted for more than 50% market share in 2018, according to Omdia. Ericsson and Nokia have largely built chips in-house in recent years or partnered with Broadcom, Marvell, or other firms to build base station silicon.

Marvell is competing against Intel, which is looking to become the global leader with 40% of the market share in base station chips by 2021. Intel has hammered out contracts with three major vendors of telecommunications equipment to supply its 10-nanometer Snow Ridge chip for 5G networking gear. Intel plans to start supplying it to Ericsson, Nokia, and ZTE, which hold the No. 2, No. 3 and No. 4 positions in the telecom market, respectively.

The baseband modem is based on 42 programmable DSP cores that are crammed into the networking subsystem and connected to a range of hardware accelerators that handle the encoding and decoding of 4G LTE and 5G transmissions. The cores and accelerators are interlaced with a high-speed, multi-ported interconnect fabric and linked to 24 MB of memory cache shared over the company’s high-speed crossbar interconnect (XBAR).

Marvell said the six-core Arm CPU is based on its TX2 architecture and clocked at 2.6 GHz. Each core contains more than 100 KB of internal memory to cache instructions or other information. Clusters of cores are attached to 1.25 MB of shared MLC cache. High-speed crossbar interconnects are used to connect all the cores to the memory subsystem, which integrates up to 3.5 MB of LLC cache and 2x memory controllers for DDR4 DRAM.

The chip incorporates 6x25G SerDes cores to connect the baseband processor and other accelerators to the radio components using the Radio-over-Ethernet (RoE) standard. The chip contains 4×25 SerDes cores that support up to 100 Gbps Ethernet as well as a range of other I/O interfaces. Marvell said it would roll out semi-custom Octeon Fusion to fit its customer’s exact needs. It also allows customers to license the IP for custom ASICs.

The Silicon Valley company said it is supplying Octeon Fusion chips to Samsung, which plans to use it in 5G base stations. Marvell has a long-term partnership with Samsung to build out new generations of radio and control plane processors for both 4G LTE and 5G networks. Samsung has been one of the underdogs in the telecom equipment market in recent years, winning around 5% of the sales in the segment in 2018, according to Omdia.

But it is looking to leapfrog Ericsson, Nokia, Huawei, and others in rolling out the latest 5G networks. Samsung hopes to command 20% of the global market by the end of the year. 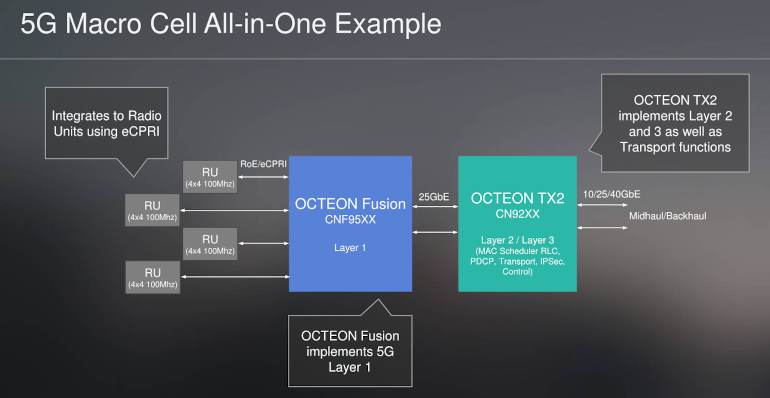 Marvell is also giving its customers another weapon to wield in the fight against Huawei, the world’s largest vendor of telecommunications gear with more than 30% market share in 2018, according to Omdia. Huawei has maintained its global lead in 5G technology in the face of the relentless pressure from the United States to suppress the rollout of its 5G network hardware. Huawei also depends on in-house chip designs for 5G base stations.

Marvell is winning over other major customers for its Octeon Fusion processors. Nokia, one of the global leaders in the telecommunications gear market, said that it plans to roll out base stations with its Octeon Fusion family of chips, which can handle the global range of frequency bands used by 5G technology, including millimeter waves. In March, Marvell also agreed to help plot out future generations of Nokia’s 5G baseband ASICs.

“Marvell provides the industry’s most comprehensive set of 5G silicon solutions,” said Raj Singh, corporate vice president of the infrastructure and server processor business at Marvell. “And the Octeon Fusion family is the cornerstone of our architecture, providing a comprehensive, software-compatible, and customizable base station compute platform.” More than 7 million Octeon Fusion chips are used in current 3G, 4G and 5G base stations.

Marvell also recently rolled out latest generation of infrastructure processors, Octeon TX2, which can be used in 4G and 5G networking devices as well as switches, gateways, routers, and other gear drilled into data centers and cloud servers. The Octeon TX2 chips feature a range of programmable accelerators for moving massive amounts of data faster and more securely. The processors also use Marvell’s TX2 64-bit CPU microarchitecture. 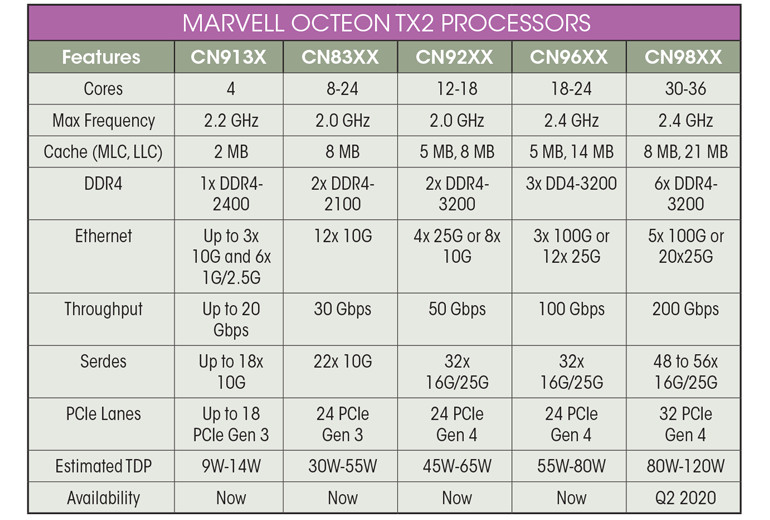 The chips are used to handle networking chores—the Layer 2 and Layer 3 protocols—that coordinate data transfers between nodes on the same network as well as between nodes on different networks. Marvell said the Octeon TX2 processors can be installed in 5G base stations with its Octeon Fusion chips, which are charged with carrying out physical layer (PHY) protocols: processing RF signals captured and released from the cellular antennas.

Marvell said the Octeon TX2 processors more than double the performance of its previous generation of chips and have integrated packet processing that scales from 10 Gbps to 200 Gbps of total throughput. The chipsets also feature up to 56 lanes of 25 Gbps SerDes and contain 3x 10G or 6x 2.5G and 5x 100G or 20x 25G Ethernet ports. They are designed to burn through only 9W to 120W of power. They also offer up to 36 PCIe Gen4 interfaces.

The chips incorporate up to 36 compute cores based on the Arm v8.2 architecture and clocked at 2.4 GHz speeds. The hardware accelerators are used to handle secure packet processing and data management chores. Marvell plans to sell a range of different SKUs , ranging from the CN91xx and CN92xx to the CN96xx and CN98xx lines. Marvell said the flagship CN98xx chip would be shipped to early customers in the second half of 2020.

The memory subsystem scales with the the number of processors core in the chips. Clusters of cores are provisioned with up to 8 MB of shared MLC cache, while the shared LLC cache ranges up to 21 MB. The chips also incorporate up to 6 lanes of DDR4 DRAM and general purpose I/O interfaces, including USB 3. Marvell said it has also rolled out a range of programming tools and libraries, including firmware, for the Octeon TX2 family. 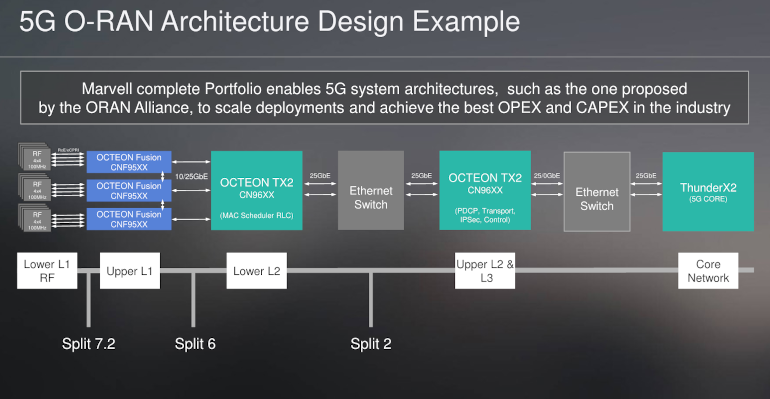 Marvell said that the Octeon Fusion and Octeon TX2 chips are tailored for the latency and throughput demands of 5G networks. But they also deliver “a degree of programmability” so that they can be upgraded as 5G standards change. Marvell said its latest generation of Octeon processors slash the cost and the power consumption of other solutions based on FPGAs that telecom equipment vendors are using to build and test out 5G base stations.

The Silicon Valley company’s strategy is to start selling complete solutions for use in 5G networking infrastructure. The Octeon Fusion family of chips can be used as baseband processors, and the Octeon TX2 chips can handle transfer and control plane protocols. At the same time, Marvell’s Prestera Ethernet chips can be used for both fronthaul and backhaul, while its Thunder X2 CPUs can be added to data centers and core networks.

Marvell has also started to roll out ASICs for 5G networks through its $650 million deal for Avera Semiconductor in 2019. The company believes the networking chips it sells for 5G technology are worth four times more per 5G base station compared to 4G.

“Marvell has continued to innovate around the Octeon Fusion architecture,” said Caroline Gabriel, principal analyst at wireless market researcher Analysys Mason, in a statement. “The ability to address today’s 5G network rollout while offering future design flexibility makes lots of sense in an evolving market. There will be several different 5G networking configurations, and Marvell processors will be capable of addressing each one of them.”