The use of robots in factory automation continues to expand because they clearly improve efficiency, cut costs, and improve quality. Fixed-arm robots do most of the work with machine-vision video cameras watching everything. However, the use of autonomous robots called logistical robots or automating guided vehicles (AVGs) is on the rise. Autonomous robots are mobile vehicles that navigate their space safely and perform assigned duties without human intervention.

Creating such competent independent machines is no easy task. But with the advanced technology today, it can be done. You should know that off-the-shelf products are available to help you produce a competent intelligent world-class autonomous robot right now.

The Heart of an Autonomous Robot

The modern autonomous robot is a mix of superior sensors, fast multiple processors, and artificial-intelligence (AI) software. The processor is not only the heart of the robot, but also its brain. Identifying that processor is one of your key design challenges. However, once discovered, this processor requires senses.

The quality, capability, and safety of the robot will depend on how well it can sense the environment and respond to it. The secret to a successful autonomous vehicle is providing that necessary computing intelligence with appropriate sensing support.

Let’s start with the processor. Its main function is to implement the various robot control functions. The processor should also give the robot some native intelligence that will allow it to function on its own. Artificial intelligence in the form of machine learning can make that happen.

Handling ML software requires major computing capability of the robot’s microcontroller (MCU). With that feature, the robot will be able to learn and adapt on its own. But don’t forget the processor’s need for I/O to deal with external sensors like video cameras, ultrasonic sensors, and millimeter-wave (mmWave) radar.

If available, a reference design gives you a set of hardware and software that immediately gets you close to your design objectives while speeding up and simplifying your design. A good example of an available autonomous-robot reference design is Texas Instruments’ TIDEP-01006. This reference design combines TI’s Sitara processors and mmWave radar sensors to enable a new generation of intelligent robotic designs. By merging these two technologies, you can now evaluate fully autonomous robotics and enable rapid development of your robotic application.

The reference design features a TI Sitara AM57x processor running a Linux SDK and a robot operating system (ROS). The IWR6843 mmWave sensors provide the “visual” input. That’s not all, though. You can add TI’s Deep Learning (TIDL) reference design that illustrates how the Deep Machine Learning capability is used on a Sitara AM57x system-on-chip (SoC).

This reference design will work in almost any application that can benefit from deep-learning/machine-learning inferencing capability. Now let’s dig a little deeper and take a more detailed look at the processor and sensors.

Choosing a processor is a tricky process. But if you’re going with the reference design, that choice has been made, namely TI’s AM574x Sitara line. This processor family is based on the popular Arm RISC architecture. It consists of two Arm Cortex-A15 CPUs plus two TI C66x VLIW floating-point DSP cores. In addition, the chip includes another couple of Arm Cortex-M4 coprocessors. Figure 1 shows a block diagram of this multifunction chip.

1. The Sitara processor contains a massive amount of circuitry in a 23- × 23-mm package.

An interesting feature of this IC is that it contains a massive amount of video-related computing power. Its two embedded vision engines (EVEs) support any video input developed by the application. Also included are secure-boot and cryptographic-acceleration security features. Finally, the chip offers just about any I/O interface you need. Of course, a complete set of development software is provided so that you can create your own application.

Autonomous robots, like self-driving cars, have a mix of different sensors that gives the autonomous vehicle different views of the same thing to ensure they know what they’re really seeing. These include short range radar, video cameras, and ultrasonics.

As the automotive industry has discovered, one of the best short-range sensors is a mmWave radar. Operating in the high mmWave range, these single-chip radars are widely deployed in vehicle ADAS and the soon-to-come self-driving cars. These advanced wireless chips are generally easy to use, but one obstacle encountered in some designs is adding an antenna. Designing an antenna for a sophisticated mmWave RF device requires special background and experience that may just not be available.

This problem has been solved with TI’s mmWave antenna-on-package (AoP) sensors, which bring intelligence to the robotics space. The sensor’s small form factor allows it to be used in various robotic applications from factory to home robots. And since it features an integrated antenna, RF-design challenges have been eliminated, allowing you to get to market faster with a superior sensor.

The TI radar ICs operate in the 60- to 64-GHz range and use a frequency-modulated continuous wave (FMCW) waveform (Fig. 2). The devices typically have three transmitters and four receivers that let the designer capture the data needed for the application. 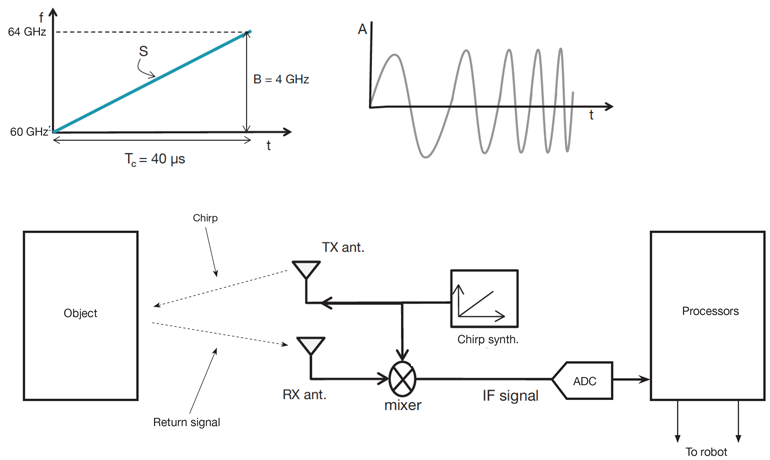 2. How the radar sensors work: They transmit an FMCW signal (chip), which is reflected back from remote objects and mixed with the original chirp. The time difference between the two is used to calculate distance.

The radar transmits the FMCW signal, called a chirp, which is a short burst of a sine wave continually increasing in frequency. The transmitted chirp is reflected back to the radar from remote objects and mixed with the original chirp. The time difference between the two signals provides enough information to calculate distance to the object and its speed. The angle of arrival can also be determined.

The AoP device delivers a 130-degree field of view both in azimuth and elevation, making it possible to provide a 3D view of a scene for safety and accurate navigation. An internal processor handles that computation.

To make industrial robots even smarter, designers are turning to AI software. One particularly helpful variation of that AI software is machine learning (ML). ML is a branch of artificial intelligence that uses neural networks to extract information from data supplied to it. ML is software that learns from the data it’s given during a “training” session. Then with actual experience, the hardware and software will enable the robot to make decisions on its own. ML makes a product intelligent. In the case of an autonomous robot, ML makes the robot more independent so that it doesn’t require human intervention.

Because ML is computationally intensive, it needs considerable processor power. In that respect, the AM57x processor has proven itself as ML-capable. A ML reference design package (TI TIDEP-01004) is available to help you deploy the deep-learning variant of machine learning.