Providing power to implanted medical devices is a major challenge. Obvious approaches such as using a rechargeable battery or supercapacitor and “wireless” charging, or even external wires, have various problems in addition to size. Wireless charging using RF energy, ultrasound, or magnetic fields brings issues of inefficiency due to absorption, disruptive localized heating, transducer size, and reliability.

Now, in research supported by the National Science Foundation and the National Institutes of Health, a team at Rice University developed what they say is the first energy-capture and conversion device driven by external magnetic fields in a manner that’s largely unattenuated by the body-tissue mass. They tested it by implanting it along with needed drive circuitry into a rodent’s brain to invoke various types of neural stimulation. Different waveforms and patterns of such stimulation are already used to treat or reduce conditions such as Parkinson’s disease, depression, pain, and obsessive-compulsive disorders.

Magnetic-power transfer is a technique that has been used, but it doesn’t function in the clinical “high-frequency” ranges above 50 Hz. The Neuroengineering Initiative project enables miniature magnetically powered neural stimulators that can operate up to clinically relevant high frequencies. The result of the project was a combination of magnetic energy capture/conversion and stimulus electronics the size of a grain of rice that was implanted and tested in rodents (Fig. 1) (we’ll also skip how and what they live-tested).

The power-transfer technique avoids the issues of absorption by the body or differences in impedance at interfaces between air, bone, and tissue associated with use of RF, ultrasound, light, and even magnetic coils. These have been evaluated in other projects and products for powering tiny wireless implants, but they have difficulties due to living tissue acting as a path impediment or producing harmful amounts of heat.

The tightly integrated Rice project has two electronic aspects: the power transducer and source function along with the neural-stimulation electronics. We’ll focus on the former function here and bypass the complicated physiologic topic of neural stimulation itself, which stimulus patterns affect which conditions, and their actual rodent-based clinical tests. Their very detailed and highly readable paper “Magnetoelectric materials for  miniature, wireless neural stimulation at therapeutic frequencies” covers all of those, along with an interesting up-front explanation of the challenges posed by alternative power-transfer techniques (published in Neuron but behind a paywall; fortunately, the identical pre-print is posted).

The power-transfer arrangement merges two diverse physical phenomena: the magnetostrictive  effect and the piezoelectric effect to transform a magnetic field to an electric field and voltage. Rather than use an implanted coil, they employed a material that generates a voltage via mechanical coupling between magnetostrictive and piezoelectric layers in a thin film. The imposed varying magnetic field creates strain in the magnetostrictive layer as the magnetic dipoles align with the applied field. That strain, in turn, exerts a force on the piezoelectric layer, which generates a voltage. The combined magnetoelectronics (ME) don’t suffer from the same miniaturization issues that affect coils and can be driven by weak magnetic fields on the order of a few millitesla (Fig. 2). 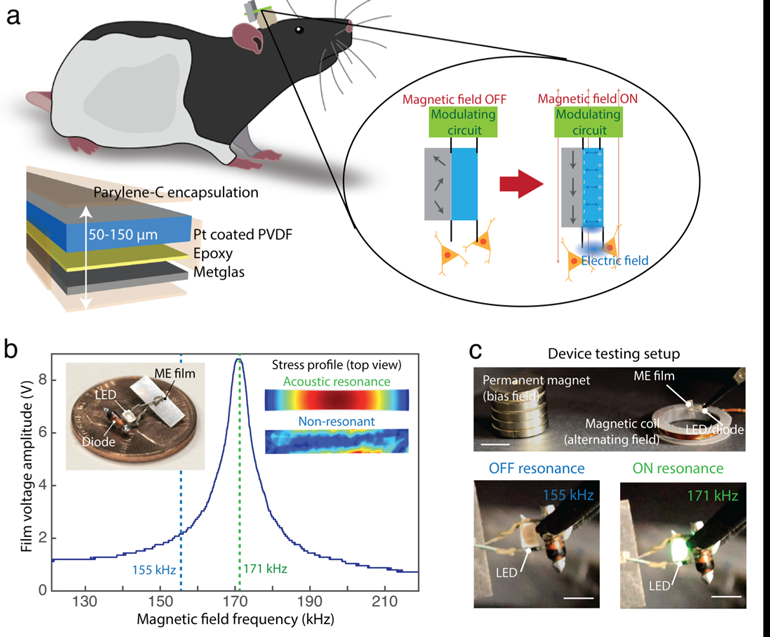 2. Magnetostrictive (ME) films convert alternating magnetic fields into a voltage: (a) Diagram of a ME device on a freely moving rat for wireless neural stimulation. The active ME element consists of piezoelectric polyvinylidene difluoride (PVDF) film (blue) and Metglas (gray) laminate encapsulated by Parylene-C. The inset shows the operating principle whereby the strain produced when magnetizing the gray magnetostrictive layer is transferred to the blue piezoelectric layer, creating a voltage across the film. (b) Example of a resonant response curve for a ME film showing that the maximum voltage is produced when the magnetic-field frequency matches an acoustic resonance at 171 kHz. The photograph inset shows an example of an assembled ME stimulator. The “stress profile” inset shows a top view of the stress produced in a ME film as calculated by a finite element simulation on and off resonance (COMSOL). (c) Device testing setup with a permanent magnet to apply a bias field and an electromagnetic coil to apply an alternating magnetic field (scale bars: upper = 1 cm, lower = 2 mm) (Source: Rice University)

To further improve energy-transfer efficiency, a constant-bias field with a permanent magnet or an electromagnet was applied. Since the strain in the magnetostrictive material is a sigmoidal function of the magnetic-field strength, the change in voltage produced by the alternating field is largest when the field oscillates about the midpoint of the sigmoid (Fig. 3). 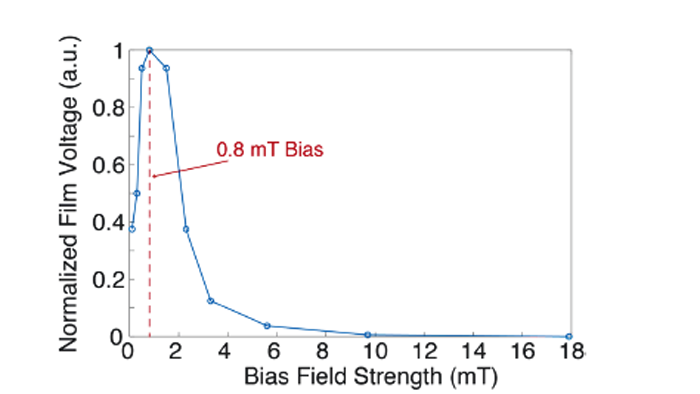 3. Film output voltage as a function of bias field: The peak resonance voltage is significantly increased by a modest bias field that can be produced by a permanent magnet. (Source: Rice University) 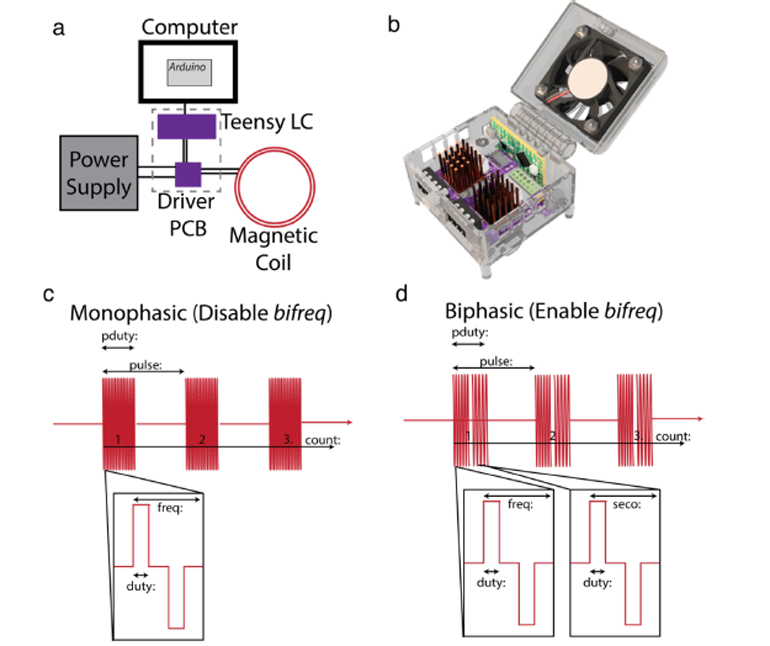 While the power “side” of the project was a major effort, it was closely linked to the stimulator and electronic portions. Caleb Kemere, paper co-author and Neuroengineering Initiative member, led the effort along with applied physics student Amanda Singer, in addition to a large project team (as seen by the paper’s author list). Overall, the project took more than five years, largely because Singer had to make virtually everything “from scratch,” plus clinical tests also had to be performed.

As explained by Kemere, “There is no infrastructure for this power-transfer technology. If you’re using radio frequency (RF), you can buy RF antennas and RF signal generators. If you’re using ultrasound, it’s not like somebody says, ‘Oh, by the way, first you have to build the ultrasound machine.’“

He noted that “Amanda had to build the entire system, from the device that generates the magnetic field to the layered films that convert the magnetic field into voltage and the circuit elements that modulate that and turn it into something that’s clinically useful. She had to fabricate all of it, package it, put it in an animal, create the test environments and fixtures for the in vivo experiments, and perform those experiments. Aside from the magnetostrictive foil and the piezoelectric crystals, there wasn’t anything in this project that could be purchased from a vendor.”