Researchers at the Department of Energy’s SLAC National Accelerator Laboratory and Stanford University have invented an emergency ventilator that could help save the lives of patients suffering from COVID-19. It uses standard parts that cost less than $400, making the SLAC ventilator an affordable option when more sophisticated technology is unavailable, in short supply or too expensive.

Neither SLAC or Stanford will make or distribute the ventilator, but they are offering the technology at no cost to those who want to build and use it after getting regulatory approvals.

A ventilator’s operating principle is simple: It compresses oxygen-rich air and pushes it through tubes into a patient’s lungs, expanding them and helping the patient take up oxygen. The lungs contract on their own, pushing the air back out. Then the cycle starts over.

In the simplest version, doctors squeeze a self-inflating bag by hand to pump air into the lungs. High-end automated versions compress the air in other ways and use complex electronics to control pressure, volume, air flow and other parameters.

SLAC’s emergency ventilator is based on a simple model, but it adds a mechanism that automatically squeezes the self-inflating bag. The system also incorporates modern, inexpensive electronic pressure sensors and microcomputers with sophisticated software that precisely controls the squeeze. The microcomputers also drive a small control panel, and operators can control the system with that or with a laptop computer. The rest is standard hospital parts.

Other groups have developed emergency ventilators in recent months, often by simplifying fancier machines. “Our invention stands out for the opposite approach: We made a fancier version of the simplest ventilator design,” said SLAC project scientist Christina Ignarra, who helped build the device.

The simple design allowed the team to develop, build and test the device in about four months. It also made the ventilator very inexpensive —less than $400 per unit, compared to $20,000 or more for a professional-grade system with field support. This should make the ventilator especially helpful for countries with scarce medical resources. 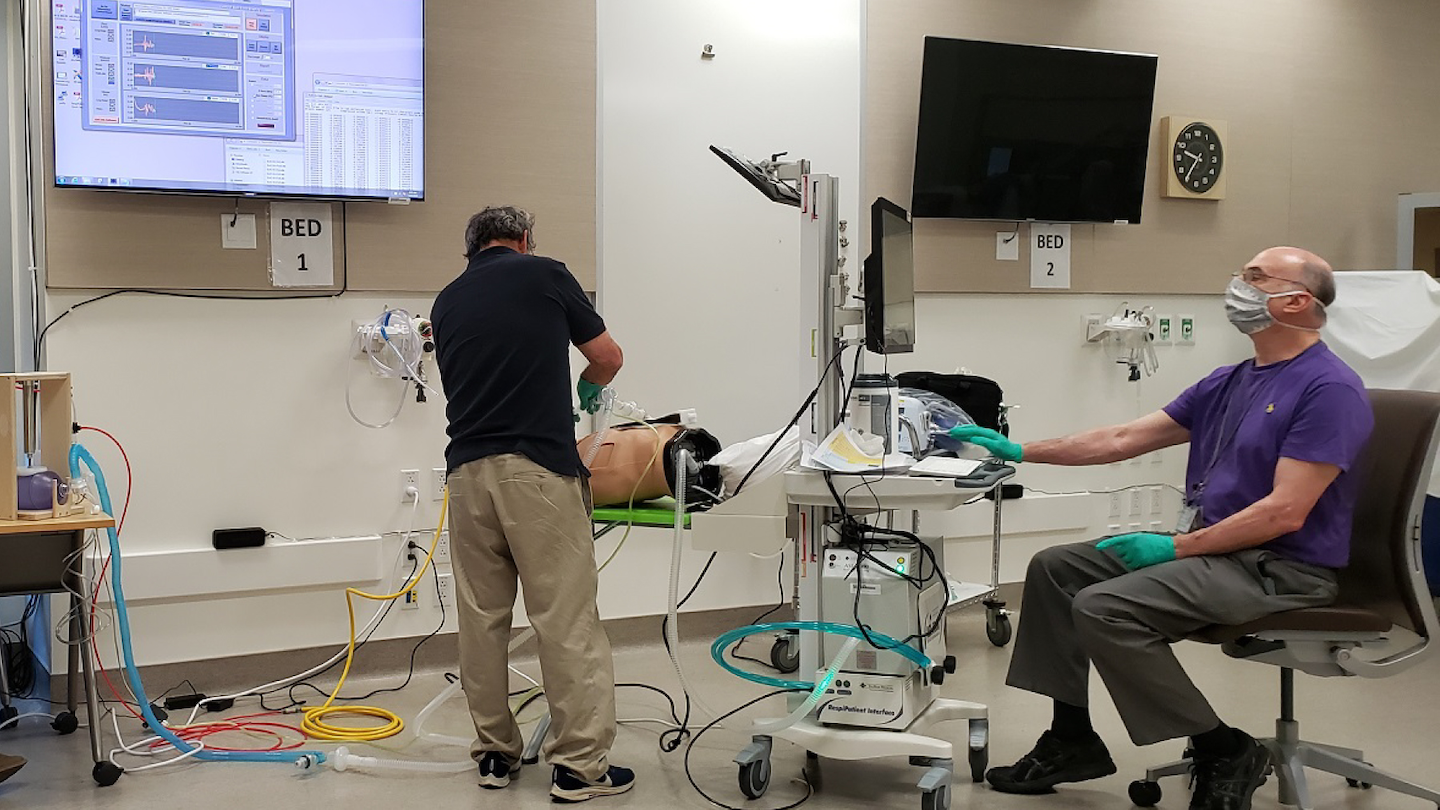 SLAC’s acute shortage ventilator project started in the home workshop of Martin Breidenbach, a professor at SLAC and Stanford. He was sheltering at home during the COVID crisis and began building several prototypes in his home workshop. He used materials around the shop, ventilator parts from high-tech distributors and other components dropped off by SLAC colleagues. He tested his prototypes on Michigan Instruments Lung Simulator that replicates the behavior of sick and healthy human lungs. With additional support from the DOE and Stanford, the project expanded and the team set up four more prototypes at SLAC once scientists were allowed back into the labs.

They also took the ventilator to the VA Palo Alto Health Care System for more advanced tests to ensure the device met requirements from the Assoc. for the Advancement of Medical Instrumentation for simplified ventilator designs.

“We’re now soliciting proposals from companies willing to take the technology from the lab and put it in the field,” says Evan Elder from Stanford’s Office of Technology Licensing. “When we find corporate partners that are a good fit, we’ll be offering royalty-free licenses for at least a year.” Based on the state of the pandemic, this approach will then be reevaluated.

To find out more about the project or contact the ventilator team, click here. A video showcasing the project is below: