Ethernet has become a mainstream communications protocol and sits atop the control pyramid in building automation. Recently, the Institute of Electrical and Electronics Engineers (IEEE) defined an Ethernet standard, IEEE 802.3.cg, for 10 Mb/s operation and associated power delivery over a single balanced pair of conductors. Because a single-pair cable can now support both data and power, adoption of the standard can lead to significant cost savings and easier installation in building automation applications.

Reasons for the existence of various communication networks include the need for longer distances, multidrop connectivity, powering scheme, and support for unique protocols. Single-pair Ethernet can address many of these reasons. Having Ethernet to the edge devices offers benefits such as direct accessibility for the control system, status updates, predictive maintenance, standardized hardware, and interoperability across various systems.

This article covers use cases for 10BASE-T1L, which offers up to a 10-Mb/s data rate over 1,000-m distances in building automation systems.

SPE uses echo cancellation to achieve full duplex communication, along with multilevel signaling and equalization to improve signal quality and achieve the required data rate over a single-pair cable (Fig. 2). There’s no difference in the interface between the processor and the PHY; however, within the PHY, the transmit and receive sections of the Medium Dependent Interface require modification as outlined above to enable single-pair operation.

SPE also enables sending power over data lines (PoDL) along the same single-pair cable through a low-pass filter like the one shown in Figure 3.

3. SPE enables sending power over data lines (poDL), as in this example.

The table lists the various power classes supported by the IEEE 802.3.cg standard. The maximum power deliverable to the load is 52 W and is defined under Class 15. Power classes below 10 are covered by IEEE 802.3.bu.

Transitioning to SPE has multiple benefits, starting from installation to managing an entire building using a single communication network. Its benefits result in a lower total cost of ownership and a better return on investment in building automation systems. For example:

The following section explains how SPE can be implemented and the associated benefits for various building automation applications.

Fire alarm control panels (FACPs) connect to various heat, smoke, and gas detectors. These sensors, connected together in the signaling loop, generate an alarm in case of accidents, and FACPs may communicate to fire stations through a telephone network. An FACP often supports multiple signal loops to facilitate splitting into various zones or floors for easy identification.

Each building can have multiple FACPs, depending on the number of floors and sensors. When a facility like a large residential complex, office, school, or shopping mall expands, there’s often a need to interconnect FACPs across buildings as far as 3 to 4 km apart through Ethernet, using either copper or fiber wires.

Ethernet based on 100BASE-TX/10BASE-T) require multiple repeaters to bridge such distances; as a result, powering them can be a challenge. Another option is to transition to fiber cables, which require media converters (copper to fiber) at both ends. Figure 4 depicts an example system. 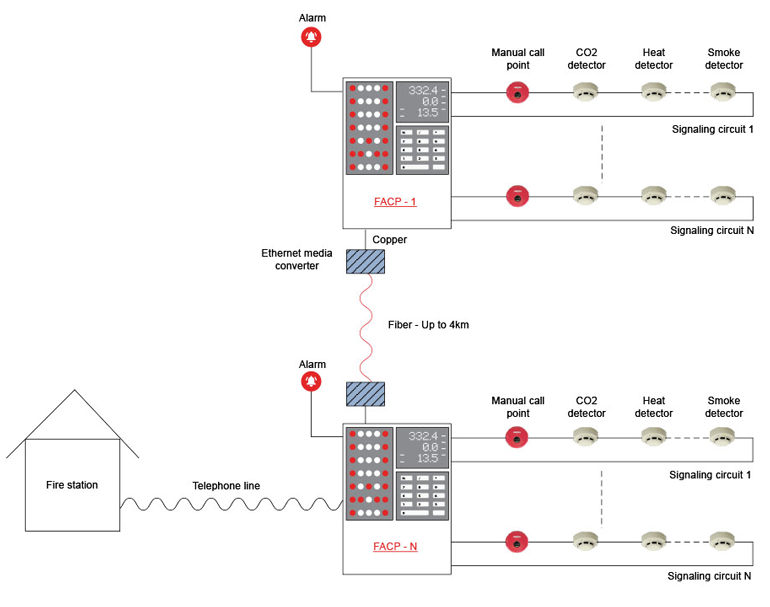 Both of the options described above result in expensive systems. SPE can solve both challenges for distances up to 1 km. For systems with greater distances, you can use repeaters powered through PoDL. PoDL eliminates the need for an external power supply, further simplifying the system. Figure 5 depicts a fire safety system using SPE. 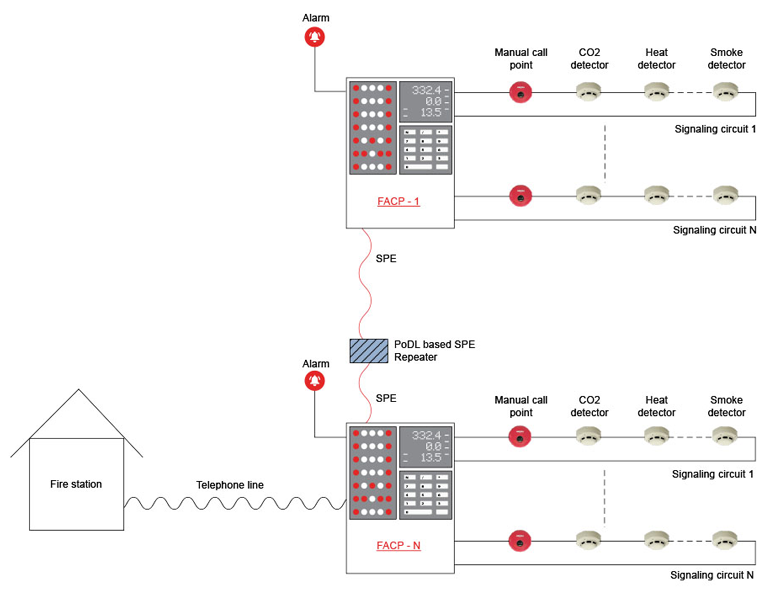 5. This architecture uses SPE between FACPs.

Elevators are a complex system. The main communication link between a moving elevator car and the machine-room controller is through a traveling cable. The length of this cable can be anywhere from 10 to 500 m or longer, depending on the height of the building. Controller area network (CAN) and LonWorks are common protocols used for elevator systems, given their low-speed requirements and required cable distances.

Cable reliability over a period of several years is important due to the amount of stress it experiences during operation. As the elevator moves up and down, the cable needs to bend, which isn’t ideal for optical fiber cabling. Therefore, most elevator cables are made of copper. And given the cable length, standard Ethernet isn’t suitable because it can’t work beyond 100 m.

Now, with SPE offering 1-km distances and speeds up to 10 Mb/s, it’s a good choice for next-generation elevator designs. The need for higher data rates between the elevator car and elevator controller arises from:

One example of predictive maintenance is monitoring the movement of an elevator door’s opening and closing by measuring the door’s motor current during its acceleration, steady-state, and deceleration periods, and analyzing any abnormality. The ability to predict potential failures would avoid elevator downtime and passenger inconvenience.

Upgrading existing elevators is equally as important as designing new elevators with more advanced features. One way to resolve retrofitting challenges is to have media converters like CAN to SPE inside the elevator car and SPE to standard Ethernet or CAN for the elevator controller (Fig. 6). 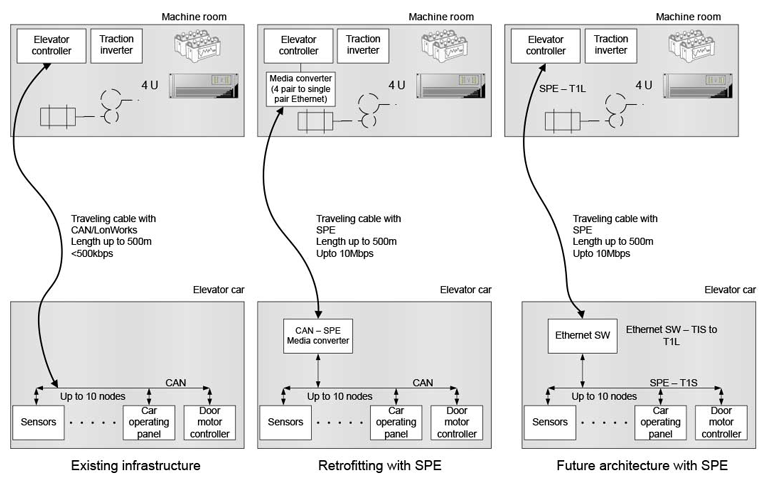 HVAC controllers are being unified in order to control a rooftop unit, chiller control unit, air-handling unit, and more. HVAC controllers use standard Ethernet to interface with higher-level building automation systems such as the building management system, as well as to daisy-chain multiple HVAC controllers. To maintain network connectivity when powering off any of the HVAC controllers, electromechanical relays short the Ethernet signals at the input and output ports.

HVAC controllers have multiple analog, digital, or fieldbus interfaces to communicate or control multiple sensors that measure parameters like temperature, humidity, and pressure (Fig. 7). The sensors could be analog output with loop power, or support 0- to 10-W/4- to 20-mA output with separate power. HVAC controllers can also connect to actuators like dampers, fans, and stepper-motor drives through communication interfaces or analog connections. Having SPE connectivity from the controller to the sensors and actuators would simplify installation with only two wires and enable access to devices at the edge. 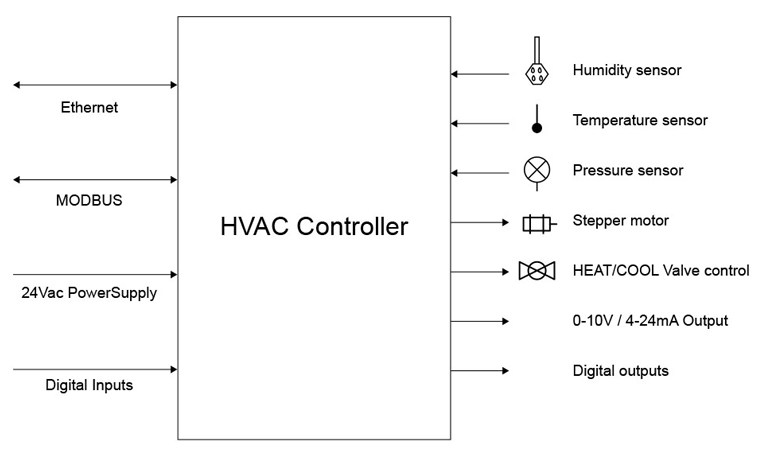 7. An HVAC controller interface will control or communicate to multiple sensors.

Figure 8 illustrates one example implementation using a humidity sensor, where the I2C interface connects to a microcontroller (MCU) with built-in media access control (MAC). SPE PHY (10BASE-T1L or 10BASE-T1S) interfaces to the built-in MAC of the MCU, while PoDL with a dc-dc converter powers the entire circuit. This architecture offers multiple benefits, including standardization of sensor connectors, reusable hardware, sensor and hardware diagnostics, and calibration.

Having multiple SPE ports within a HVAC controller to interface various sensors and actuators would require an application-specific integrated circuit to implement Ethernet switch functionality, which is readily available.

Outdoor Internet Protocol (IP) network cameras are often installed at the perimeter of buildings to ensure the continuous capture of video and generate alarms when security is breached quickly enough to give security officers sufficient time to react. The distance from these cameras to a network video recorder could be 1 km or more. Bridging this distance with standard Ethernet involves repeaters or the use of fiber cabling. With efficient encoding systems like H.264 and H.265, the data-rate requirement drops to under 10 Mb/s, even with 4-Mpixel sensors that have a 30-fps rate.

Future IP camera products are expected to support SPE, which will facilitate easier installations, as will network video recorders offering a power-sourcing equipment port (Fig. 9). Classes 8 and 9 (48-V regulated power-sourcing equipment) or Classes 14 and 15 (50 to 58 V maximum) could support the required power levels for an IP camera, which might require as much as 52 W of power to operate. This power would be sufficient for most camera systems, even those with built-in heaters. For buildings that need upgrades, an intermediate solution would be to use standard Ethernet-to-SPE converters. 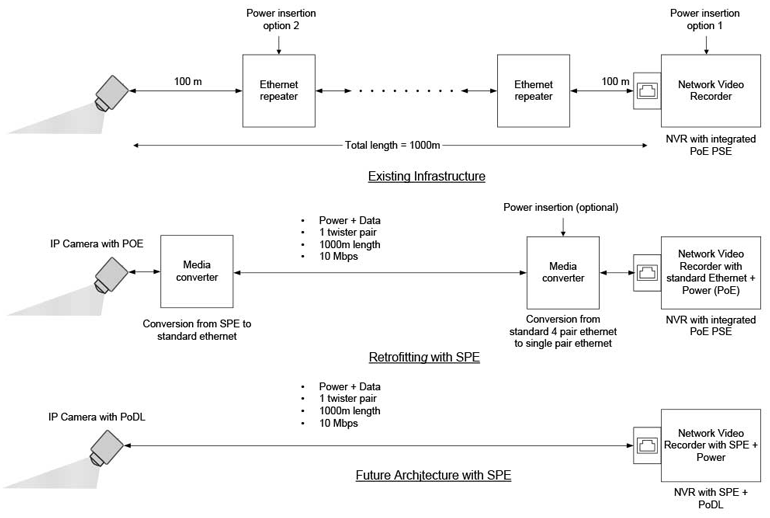 SPE, either standalone (data only) or together with power, offers numerous opportunities in building automation. Until the ecosystem is fully developed, though, there’s still a need for media or protocol converters to upgrade existing systems, as well as challenges associated with the reuse of existing cables (unshielded, no twisting, wire gauge) and connectors, which may not offer the full distance or speed as defined in 802.3cg. But this will not be a major hindrance, as the future benefits outweigh the constraints.

Power-sourcing equipment and power-delivery devices for SPE are expected to be released in the coming years. Until then, an engineered link will power devices at the edge. You can also expect to see building automation products supporting SPE with seamless integration.