It may seem like a holdout against the solid-state world, but the vacuum-tube magnetron is still at the heart of every consumer microwave oven and many commercial ones used for cooking or drying. Developed during World War II in the highest secrecy by the British, then brought to the U.S. to be optimized and made manufacturable in volume, this 500-MHz magnetron was key to early radar units.

Now, it has largely been replaced by solid-state power-amplifier (SSPA) devices except in two areas: very high-power applications, and the standard consumer microwave oven. The magnetron has gone from being among the most highly classified secrets to where you can buy a replacement for an oven, including the waveguide, for between $50 and $100 (Fig. 1). It’s now a highly refined, tightly engineered, cost-effective solution with standardized input, output, and power connections to generating 500 to 1000 W of RF energy in the 2.4- to 2.5-GHz range.

1. The consumer magnetron has become a standardized, low-cost, commodity 2.4- to 2.5-GHz RF source, orders of magnitude removed from its WWII origins.

However, the magnetron for ovens has limitations, primarily in controllability and lifetime. In fact, when the oven is set for an intermediate heating-power level, this is accomplished not by analog throttling back of the output, but by duty-cycle pulse-width modulation over a baseline of several seconds. Further, as with any vacuum tube, the magnetron will degrade and burn out, typically after five to ten years of consumer use. (If you want to get a better understanding of the multiple issues related to microwave cooking, whether using a magnetron or an SSPA, Ampleon has a detailed, insightful, 13-page application note “RF Solid State Cooking White Paper” that looks at ovens from RF, thermal, and cooking perspectives.)

Seeking to replace the home-microwave magnetron with a smaller, more controllable solution, Ampleon introduced the BLP2425M10S250P, a 250-W LDMOS RF power transistor for solid-state cooking as well as industrial, scientific and medical (ISM) applications in the 2400- to 2500-MHz frequency band. Key to its lower cost and thus suitability for higher-end consumer applications is the changeover from the traditional ceramic package to a four-lead, thermally enhanced, overmolded plastic-flanged package (Fig. 2). 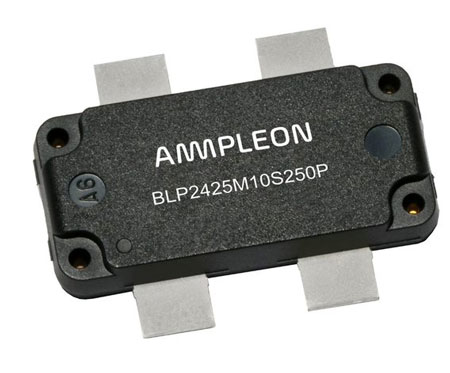 It’s based on Ampleon’s 10th-generation LDMOS process, operating with 67% drain efficiency and 15-dB gain, thus saving energy and simplifying the cooling requirements in higher-power systems that use multiple devices. The device enables accurate, continuous adjustment of output power and frequency over the band, making it a good fit for industrial applications such as plasma generation, as well as for the emerging solid-state cooking market. In addition, as a transistor rather than a vacuum tube, it operates from a lower-voltage 32-V dc supply rather than the more-dangerous high voltages needed by magnetrons—an important requirement for medical and consumer applications.

Details on the BLP2425M10S250P are in the datasheet, which includes graphs showing power gain and drain efficiency as function of output power at various frequencies with the band, temperatures, quiescent drain current IDq, and drain-source voltage VDS, along with a table of load-pull impedance data. The datasheet also shows a 60- × 90-mm test circuit, including bill of materials (BOM) built on a Rogers TC350 (sorry, no FR-4) printed-circuit board as substrate (0.762 mm thickness) (Fig. 3). 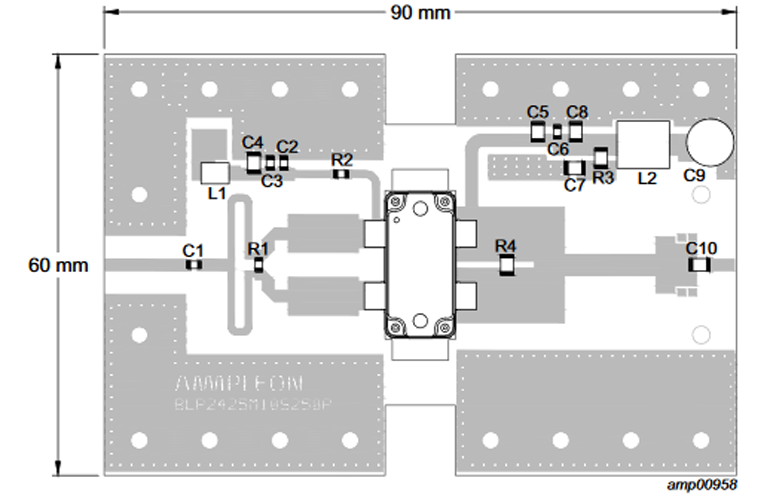 3. This test board with marked components and detailed BOM enables users to evaluate the BLP2425M10S250P under the same conditions as used by Ampleon.

The datasheet and other support documents, including design tools and simulation model, can be accessed via the BLP2425M10S250P home page.