Nearly all lighting applications today use LEDs. In a relatively short amount of time, they have become established as the preferred choice of illumination. However, in most applications, an LED can’t fulfill its function by itself. The LEDs must be operated with a suitable power supply. Such a driver circuit should naturally be as efficient as possible to reduce energy consumption, which is why switch-mode power supplies are primarily used for this purpose.

For all power supplies, regardless of the type, electromagnetic compatibility (EMC) should be considered. This is especially true in the case of LED lights. Various standards for measurement, evaluation, and documentation of the interference generated by LED lights have become established over time.

Uncontrolled electromagnetic interference (EMI) can have serious consequences. Just recently I had a firsthand experience with one of them. An old E27 incandescent light bulb on my electric garage-door opener burned out. After I replaced it with a modern LED light bulb, the light worked again. But I could no longer open the garage door with the remote control. Thus, the radiated emissions from the LED light must have caused interference in the radio electronics of the garage door.

The emissions generated by a switch-mode power supply are partly conducted and partly radiated emissions. Electromagnetic emissions from an LED driver thus can be transferred via the power-supply lines as well as magnetically or capacitively coupled into adjacent circuit segments. These emissions aren’t usually destructive, but they can lead to improper functioning of adjacent circuit components.

Thus, it makes sense to minimize the generated emissions, but what requirements must be met in this regard? All electrical and electronic products in the European Union require CE marking. The CE mark proves that a product complies with EU rules on safety, health, and environmental protection. As a result, transport of such compliant devices within the European Economic Area is permitted. In other parts of the world, there are other important requirements pertaining to radiated emissions. Examples include UL, CSA, etc.

Numerous standards are specifically related to the safety of, and emissions from, LED lights. A major one is CISPR 11. CISPR stands for International Special Committee on Radio Interference. Many other rules and regulations, including ISO, IEC, FCC, CENELEC, SAE, and more, are based on the CISPR standards.

Conducted emissions can be reduced predictably with the appropriate measures using additional supply-line filters. These filters are designed to address common- or differential-mode noise. The frequency range that usually plays a role here is below 30 MHz.

However, developing these filters is not all that simple. A filter is usually optimized for a particular frequency range. In other frequency ranges, parasitic effects and the resulting changes in behavior of the components used can cause problems. For example, a filter may reduce the emissions generated by a switch-mode power supply at 100 kHz very well. Still, power supplies usually generate emissions in a wide frequency range, especially above 10 MHz. Here, the filter optimized for 100 kHz could even increase the emissions through parasitic effects and resonances.

The radiated emissions cannot be predictably reduced in this way. Here, the energy content of parasitic inductances and capacitances from the PCB traces, as well as passive circuit components, plays a decisive role. The frequency range usually lies above 30 MHz up to an upper limit that’s laid down in the respective standards. Reducing these radiated emissions is very difficult—it requires a great deal of experience and background knowledge.

This is especially the case when driving LED lights, because the level of radiated emissions can be extremely high. Usually a chain of LEDs is driven. Such a series circuit often requires a large amount of space on the board. Thus, the geometrical arrangement has the properties of an antenna and generated emissions are radiated particularly effectively. Shielding electrical circuits is complex, expensive, and, in the case of LEDs, not even possible in part because the desired light could not pass through a sheet metal shield. Thus, the solution lies in generating only a small amount of radiated emissions.

When designing LED bulbs with a power supply, be aware of the following possibilities regarding EMC:

Most LED drivers are boost (step-up) converters. Figure 1 shows a schematic circuit diagram of this type of converter. Boost converters usually have lower conducted emissions on the input side. The input currents are non-pulsating (blue current loop). On the output side, though, there are very high emissions because pulsed currents flow through the flyback diode (red current loop). During the on-time—that is, when the switch connected to ground is on—the inductor is charged and there’s no flow of current through the flyback diode. The total energy to supply the load in this time section comes from the output capacitor.

1. Shown is the circuit diagram of a boost converter, a very common topology for LED drivers.

Switching-regulator ICs that generate much lower radiated emissions due to innovations have recently become available. The critical paths are laid out so symmetrically that the generated magnetic fields largely cancel each other out because of different directions of current flow.

Figure 2 shows the symmetrical arrangement of this topology. The magnetic field generated in the top red loop is the same magnitude as the field in the bottom red loop, but points in the opposite direction. This yields the effect of field cancellation. At Analog Devices, this technology is marketed under the name Silent Switcher. In addition to this innovation, there’s a strong reduction in the parasitic inductance in all critical line segments, considerably reducing the radiated fields. 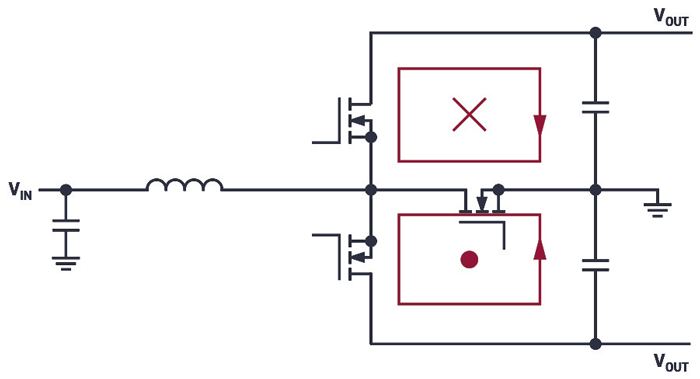 2. The Silent Switcher concept is applied to a boost converter with magnetic fields that cancel each other out.

In Silent Switcher 2 technology, the length of the path is substantially reduced. This is accomplished through flip-chip technology. Here, the silicon in the switching-regulator IC is connected to the IC housing not with bond wires, but rather with copper pillars. These pillars have a much lower inductance. Therefore, for the same current switching speed, there’s a much lower voltage offset and, through this, a lower radiated emissions level. In turn, it’s very possible to significantly lower EMI by using optimized LED driver ICs. In some cases, it’s even possible to stay within certain EMI limits without using EMI filters.

A practical circuit with very low radiated emissions is shown in Figure 3. Here, the LT3922-1 LED driver is operated in a boost circuit. A chain of 10 LEDs with 333 mA is driven with an input voltage of 8 to 27 V. For this constellation, switching is done at a switching frequency of 2 MHz and the generated emissions are minimal.

3. Here’s an example circuit for an LED driver optimized for minimal emissions and the best EMC behavior.

Figure 4 reveals the average radiated emissions from the circuit in Figure 3. The red lines show the respective limits from the CISPR 25 specification. As can be seen, this specification is easily met (i.e., undershot). 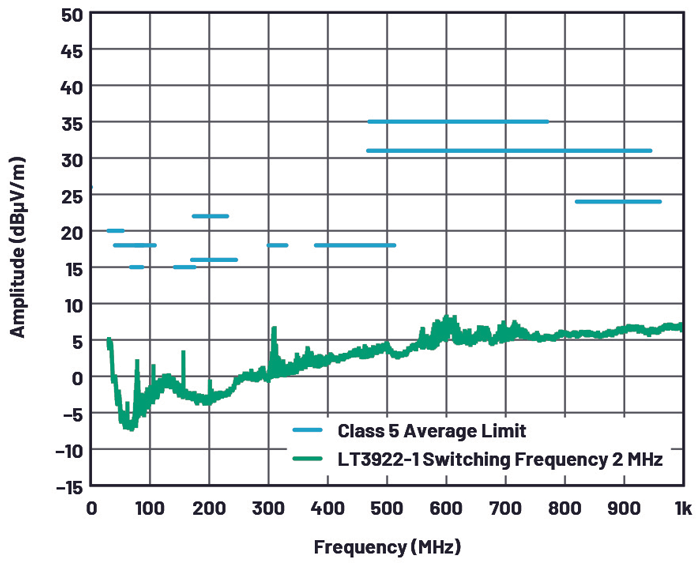 An LED driver such as the LT3922-1, which is designed for low emissions, frequently also offers the option of activating a spread-spectrum frequency-modulation (SSFM) function. This may not reduce the real emissions generated, but it spreads the emissions over a wider frequency range. Through this, better results can be obtained in the measurements for individual EMC standards.

The LT3922-1 offers such a function between the respectively set switching frequency and 125% of this value. Spread spectrum can also have a very significant effect in the VHV and UHV bands, reducing the emission of any given frequency below the level that would affect radio communication.

As is the case for every switching regulator, for LED drivers, board layout design is very critical. Modern innovations such as silent-switcher topologies help dramatically improve EMC behavior, but it’s still important to avoid any mistakes with the printed-circuit-board layout. Proper placement of critical components that conduct rapidly switched currents is especially decisive for minimizing radiated emissions. As little parasitic inductance as possible should be included in these paths. The current loops should also be designed as compactly as possible.

Some of today’s modern LED drivers are specialized in minimizing electromagnetic emissions. For this, they use some key innovations in the field of switching regulators, such as a silent-switcher topology. When designing with these ICs, the effort required to comply with EMI limits is relatively low.