JESD204B is a recently approved JEDEC standard for serial data interfacing between converters and digital processing devices. As a third-generation standard, it addresses some of the limitations of the earlier versions. Among the benefits of this interface are reductions in required board area for data-interface routing, reductions in setup-and-hold timing requirements, and the enablement of smaller packages for converter and logic devices. New analog/digital converters from various vendors, such as the AD9250 from Analog Devices, use this interface.

There’s a tradeoff to realizing the benefits of the JESD204B interface, due to the complexities and subtleties that distinguish it from existing interface formats and protocols. As with any standard, it’s clear that the interface must function seamlessly to gain popularity and traction versus more common interfaces, such as single-data-rate or double-data-rate CMOS or LVDS.

Although the JESD204B standard is documented by JEDEC, some specific information about it is subject to interpretation or may be spread over multiple references. It also would be extremely helpful if there were a concise guide that provided an overview of the standard, how it works, and how to troubleshoot it if issues arise.

This article explains the interface from an ADC to an FPGA for JESD204B, how to identify when it’s working correctly, and, perhaps more importantly, how to troubleshoot it if something isn’t quite right. The troubleshooting techniques discussed can use commonly available test-and-measurement equipment including oscilloscopes and logic analyzers, along with software tools such as the ChipScope from Xilinx or SignalTap from Altera. Interface signaling is explained as well, allowing for a single approach or multiple approaches to visualize the signaling.

The JESD204B standard provides a method to interface one or multiple data converters to a digital-signal-processing device (typically, an ADC or DAC to an FPGA) over a higher-speed serial interface compared to the more typical parallel data transfers. The interface, which runs at up to 12.5 Gb/s/lane, uses a framed serial data link with embedded clock and alignment characters.

The interface eases implementation of the data interface of high-speed converters by reducing the number of traces between devices, thus reducing trace-matching requirements, and removing setup-and-hold timing-constraint issues. Since a link needs to be established prior to data transfer, new challenges arise and techniques are required to identify that the interface is working properly—and, if not, what to do.

The JESD204B interface uses three phases to establish the synchronized link: code group synchronization (CGS), initial lane synchronization (ILAS), and data-transmission phase. The required signals for the link are a shared reference clock (device clock), at least one differential CML physical data electrical connection (called a lane), and at least one other synchronization signal (SYNC~ and possibly SYSREF). The signals used depend on the subclass:

Subclass 0 is adequate in many cases and will be the focus of this article. Subclass 1 and Subclass 2 provide a method to establish deterministic latency. This is important in applications wherein synchronizing multiple devices or system synchronization or fixed latency is required (such as when a system needs a known sampling edge for an event, or an event must react to an input signal within a specified time).

Figure 1 shows a simplified JESD204B link from the transmit device (ADC) to the receive device (FPGA), with data from one ADC going over one lane.

1. JESD204B link diagram for one ADC to an FPGA through one lane.

Although many variables exist within the JESD204B specification, some have particular importance when establishing a link. These key variables from the specification are (note that these values are typically represented as “X − 1”):

As noted above, many applications can use the relatively simpler Subclass 0 mode of operation. This is also the easiest mode to establish and for which to verify a link. Subclass 0 uses three phases to establish and monitor synchronization: CGS phase, ILAS phase, and data phase. The figures associated with each phase present the data in different formats, because they might be seen on an oscilloscope, logic analyzer, or FPGA virtual I/O analyzer such as the Xilinx ChipScope or Altera SignalTap.

The most significant parts of the CGS phase that can be observed over the link are shown in Figure 2, along with a description of the five highlighted points of the figure.

The /K28.5/ character, also just known as /K/, within the JESD204B standard can be exhibited as shown in Figure 3. The standard requires a running neutral disparity. The 8B/10B coding allows for a balanced sequence that, on average, contains an equal amount of 1s and 0s. Each 8B/10B character can have a positive (more 1s) or negative (more 0s) disparity, and the parity of the current character is determined by the current sum of the previous characters sent. This is typically accomplished by alternately transmitting a  positive parity word, followed by a negative parity word; the figure shows both polarities of the /K28.5/ symbol.

3. Logic output of /K28.5/ characters and how it propagates through the JESD204B Tx signal path.

In the ILAS phase, four multiframes allow the receiver to align lanes from all links and the receiver to verify the link parameters. Alignment is required to accommodate trace–length differences and any character skew introduced by the receivers. Each successive multiframe immediately follows the previous one of four (Fig. 4). Whether or not the scrambling link parameter is enabled, ILAS is always transmitted without scrambling.

The ILAS phase begins after SYNC~ has been deasserted (goes high). After the transmit block has internally tracked (within the ADC) a full multiframe, it will begin to transmit four multiframes. Dummy samples are inserted between the required characters so that full multiframes are transmitted (Fig. 5).

The four multiframes consist of the following: 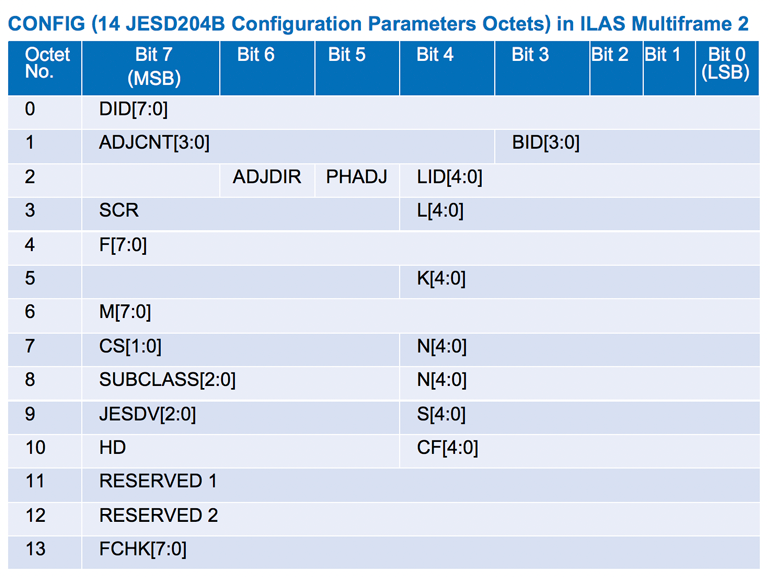 The frame length can be calculated for the JESD204B parameters:

A converter running at 250 MS/s that has one sample per converter per frame (note: “S” is 0 in this case, since it’s encoded as binary value –1) has a 4-ns frame length:

The multiframe length can be calculated for the JESD204B parameters:

A converter running at 250 MS/s that has one sample per converter per frame and 32 frames per multiframes has a 128-ns multiframe length.

In the data-transmission phase, frame alignment is monitored with control characters. Character replacement is used at the end of frames. There’s no additional overhead to accommodate data or frame alignment during the data phase. Character replacement allows an alignment character to be issued at a frame boundary if and only if the last character of the current frame may be replaced with the last character of the last frame. This facilitates (occasional) confirmation that the alignment hasn’t changed since the ILAS sequence.

Character replacement in the transmitter occurs in the following instances:

Transmitters and receivers each maintain a local multiframe counter (LMFC) that perpetually counts to (F × K) − 1 and then wraps back to “0” to count again (ignoring internal word width). A common (sourced) SYSREF is issued to all transmitters and receivers that use the SYSREF to reset their LMFCs, after which all LMFCs should be synchronized (within one clock) to each other.

At the release of SYNC (seen by all devices) the transmitter begins ILAS at the next (Tx) LMFC wrap to “0.” If F × K has been properly set to be greater than the (transmit encode time) + (line propagation time) + (receiver decode time), received data will propagate out of the receiver’s SERDES before the next LMFC. The receiver will pass the data into a FIFO, which will begin outputting data at the next (Rx) LMFC boundary. This known relationship between the transmitter’s SERDES input and the receiver’s FIFO output are known as the deterministic latency.

What Can Go Wrong?

JESD204B can be a complicated interface standard, with many operational subtleties. Finding out why it’s not working requires a good understanding of likely scenarios:

Stuck in CGS mode: if SYNC stays at logic low level, or pulse high for

Checking the board, unpowered:

Checking the board, powered:

Can’t get beyond ILAS mode if SYNC pulses high for approximately four multiframes:

Get into data phase but occasionally link resets (returns to CGS and ILAS before returning to data phase):

Other general tips when troubleshooting link:

This troubleshooting guide can’t be all inclusive, but it provides a good basic baseline for an engineer working with and wanting to learn about a JESD204B link. Hopefully, engineers getting involved with this latest high–performance interface standard will find it informative and helpful if troubleshooting is required.