An anonymous source within Tesla (allegedly a VP) has confirmed the persistent rumors that the company is moving forward with a highly ambitious and unconventional plan for expanding its battery manufacturing capacity.  If successful, the project has the potential to end the bottleneck that’s threatened to prevent the company from meeting the explosive demand for its cars and trucks. The highly placed Tesla insider said, in order to avoid any further delays to his plan for world domination, Tesla CEO Elon Musk, has ordered the creation of a floating battery-manufacturing complex that incorporates its own lithium mining operations.

Tesla’s dilemma is not unique. In these early days of the electric-vehicle (EV) boom, every auto manufacturer has had difficulty sourcing enough lithium batteries. Some, like General Motors, have inked priority supplier agreements where they “pull” as many batteries as they need from LG Chem for production of the Chevy Bolt EV, leaving the likes of Volkswagen, Hyundai, and others to pick up whatever excess cell production is available. This has caused vehicles like the Kona to be limited in supply and Volkswagen to slide the introduction of its ID3 EV to a point in time where LG’s manufacturing capacity expansion can pace their needs.

Tesla has acquired three mothballed freighters from the Navy’s Reserve Fleet and converted them into a floating, vertically integrated production facility for its lithium batteries. (Credit: By Earthpig – Own work, CC BY-SA 3.0, https://commons.wikimedia.org/w/index.php?curid=15900615)

Tesla’ partnership with Panasonic that resulted in the original “Gigafactory” concept has helped keep those shortages at bay—at least for the short term. The first GigaFactory, located near Reno, Nev., is a massive operation, where raw materials, cells, modules, and battery packs (and, according to locals, assemblies for an undisclosed secret project) are made under the same roof.

Tesla expanded its vertical integration strategy to include assembly of the vehicles themselves in Shanghai’s Gigafactory 3, Berlin’s Gigafactory 4, and a yet-to-be-selected Cybertruck & Semi Gigafactory 5 that Elon Musk has tweeted will be somewhere in the U.S. Midwest. According to this story’s primary source, Gigafactory 5 will also be the first high-capacity facility for manufacturing dry-cell battery packs based on the technology it acquired in its purchase of Maxwell technology. This corroborates the observations of several industry observers who say that the new batteries are essential for giving the Semi and the pickup an acceptable range when they are heavily loaded.

Although Tesla’s manufacturing initiative solves one problem, it puts an even greater strain on the raw materials supply chain it needs to make several billions of 21700 cells required annually. It’s been previously rumored that Musk has been trying to solve this problem by partnering directly with one or more lithium mining operations.

While accompanying Musk on a tour of one of those lithium mines, our source reports to have heard Musk remark that there might be a better way to obtain the vital element. Upon being told that the lithium deposits being mined were not veined minerals, but rather deposits from ancient inland seabeds that once covered North America and China, he began to quietly investigate mining the ocean itself.

Under the guise of being in port for “rework,” Musk ordered the refit of SpaceX’s fairing-recovery ships, GO Ms Tree and GO Ms Chief, with lithium nodule mining equipment, beginning with the modification of their catcher arms (basically pieces of pipe). For the past several months, the ships would use launches for cover as they’d sail to loitering positions to catch SpaceX rocket fairings, all the while mining lithium nodules from the ocean bottom. Happy with the results, Musk ordered GO Ms Tree to the West Coast, with the cover story that it needed to be near SpaceX’s Hawthorne headquarters.

According to the Tesla source, Musk used his SpaceX military connections to exchange a Falcon Heavy mission for the mothballed Navy vessels Cape Breton, Cape Blanco, and the Borda, which had been anchored in the Suisun Bay Reserve Fleet storage facility, near Benicia, Calif. These vessels are presently being retrofitted by Tesla and Maxwell engineers to produce lithium batteries, modules, and packs.

According to the source, the fleet would be anchored in international waters off the coast of San Francisco, where ocean-mined lithium nodules would be offloaded from GO Ms Tree and GO Ms Chief to the Cape Blanco, which is being refitted as a lithium refinery. The refined ore (now 99.314% pure lithium) would then be transferred for cell production to the Cape Breton. From there, modules and battery packs would be assembled on the Cape Borda, with finished goods being moved by barge to the Port of Oakland to offload and clear U.S. Customs and, subsequently, by Tesla Semi to Tesla’s Fremont car plant.

Electronic Design’s source also said that as an unexpected bonus, the engineers, technicians, and workers involved with the offshore commissioning of the refinery and manufacturing ships over the past couple of months had been isolated from the mainland and weren’t exposed to the coronavirus. As such, they’ve been able to ramp up the three-ship “Mini-Gigafactory” to pilot production levels over the past month without fear of the COVID-19 virus.

To prevent infection, any new production employees and engineers are being “airlocked” for 14 days prior to boarding the ships. To ensure no interruptions in production, this procedure is expected to remain in place well beyond the 18 months its expected for a COVID-19 vaccine to become available. The Tesla insider said, at the time this is being written, that the first ocean-lithium-based batteries are scheduled for delivery to Tesla’s Fremont plant on April 1st, 2020. 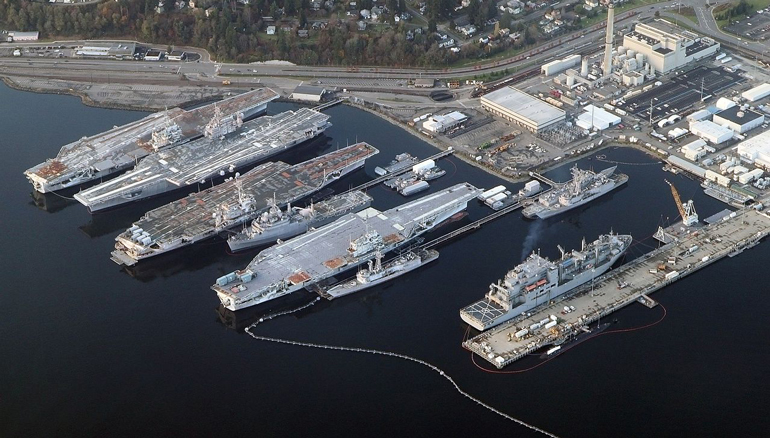 Musk is also rumored to be looking to barter several Falcon missions for a retired aircraft carrier (ideally with its nuclear power reactor fully operational) from the Puget Sound Naval Shipyard’s Reserve Fleet, or elsewhere. The converted carrier would serve as a floating factory for Model 3 and Model Y vehicles. A PowerPoint slide leaked from another source illustrated how the carrier’s crew quarters could be used to house and feed the workforce, while the ship’s integrated aircraft elevators would be used to transfer parts and finished vehicles between levels of the multi-deck manufacturing operation.

If the deal goes through, the decommissioned carrier will be anchored with its three support ships in international waters to form Gigafactory 6, escaping California and federal taxes completely, as well as dodging “red tape” with, as Musk terms them, “silly things” like OSHA regulations, minimum wage laws, and corporate governance requirements.

Unconfirmed reports of a project to launch a Tesla Roadster into low Earth orbit using the carrier’s catapult system are likely to be simply rumors.

Andy Turudic is a special correspondent for Electronic Design.