Industrial vs. Professional Cameras: Reconsidering the Tradeoffs in B2B Apps

The move to digital imaging sensors has created several options for system developers. For example, during the past 15-20 years, as digital technology improved, several industrial and B2B organizations started to switch from industrial cameras to professional (DSLR/mirrorless) cameras.

So where are we now? To answer this, we look at some of the big tradeoffs faced by system developers and the recent technological advances for each to determine which industries should consider a shift.

Industrial and professional cameras differ in several ways, and each is (or should be) designed holistically to be more than just a sensor. A well-engineered camera—be it an industrial camera like the XCG-CG510 or a full-frame mirrorless camera like the Alpha ILCE 7R—will select/design every component to deliver the best possible image from the sensor: adapting the housing, the lens, the processor, the transmission standard…

But there are tradeoffs. Some of the biggest are resolution vs. sensitivity, ruggedness vs. size/weight, the need for automation and synchronization, as well as cost, speed, and the lenses available.

Resolution is typically the first requirement specified in an imaging system. Indeed, most (albeit not all) applications want as large a resolution as system cost and processing capabilities allow.

A higher-resolution system can capture a larger area without losing essential details. For example, in ITS and security applications, a single wide area shot would still clearly distinguish the number plate, or an individual’s face. In drones used for mapping or archaeological surveys, this allows for fewer images to be taken while still capturing an entire area, and still provide the fine detail to enable an individual region of interest to be zoomed in on to see greater detail.

However, image quality isn’t just about the overall pixel count. There’s a limit to how far you can take this approach.

By decreasing pixel size, you decrease the amount of light reaching each pixel, which reduces the sensitivity of the camera and increases the noise. Take it too far and images become less usable.

Just such a scenario has played out in the evolution of global-shutter CMOS (GS CMOS) sensors used in industrial cameras. When moving from the first to the second generation, pixel size shrunk by 41% (from 5.86 µm to 3.45 µm). This delivered the improved resolution required by some industrial manufacturers, but it also decreased sensitivity that could negatively impact other applications. As a result, the third generation of sensors looked to find a middle ground, increasing pixel size to 4.5 µm to better balance resolution and sensitivity.

And while new technologies are addressing this balance—for example, process technologies that flip the photosensitive and wiring layers to allow more light to reach the pixel—a larger sensor will deliver a better image quality. This is particularly evident if used outdoors at night and in poor conditions, where lighting conditions vary.

This means the 1-in. format (12.8 × 9.6 mm) or smaller formats used in industrial cameras designed for standardized lighting conditions aren’t ideal in other settings. Instead, APS-C (23.6 × 15.6mm) or better still, full-frame (36 × 24 mm) sensors found in professional mirrorless cameras, will produce much higher image quality.

To put these measurements in context, a full-frame camera has roughly twice the sensor area of an APS-C camera, and roughly 7 times that of a 1-in. sensor (Fig. 1).

1. Using a larger sensor improves sensitivity and enables a larger area to be captured, speeding up applications like mapping. The image shows the difference in what’s captured for a 1-in., APS-C, and full-frame camera.

Industrial cameras are typically placed under significant stress and thus are designed to cope accordingly. A camera designed to be on the factory floor will be should be able to cope with vibrations of 10 G (at 20 to 200 Hz) plus, and shocks of up to 70 G.

However, this adds weight and bulk to the camera, making it inapplicable for a drone used for mapping (it would significantly shorten flight time).

This means professional cameras, such as the Alpha ILCE 7R, which are considerably lighter than their industrial counterparts, are used instead. And by utilizing the smaller APS-C sensors, camera size and weight can reduce further—albeit with reduced resolution and/or sensitivity.

If we look at drones again, and especially an application like mapping that needs long flight times, weight can be critical. Indeed, in a handful of cases, we’ve been given a maximum camera weight of just 600 g. And drones are not the only market where size matters. Multi-camera capture systems, such as those used in e-commerce, can have 20 or 30 units, making small increases in unit size significant at a system level.

As such, in applications where size matters, APS-C cameras like the Alpha 6600 tend to be integrated.

However, the weight of full-frame camera systems has dropped considerably to the point where they too fall below 600 g. For example, this past September saw the launch of what’s currently the lightest full-frame camera system (body and lens). It weighs a mere 510 g, which is just 1% more than the Alpha 6600 APS-C camera commonly used with drones.

That’s not to say ruggedness isn’t an issue for B2B applications. ITS and security cameras are designed to be left outdoors in all weathers, in casings that are subject to vibrations from wind and passing road traffic. Hence, they have often used industrial and/or block cameras, connecting them via the Gigabit Ethernet interface.

This is also being addressed (albeit not to industrial levels), though. Professional cameras are beginning to use monocoque constructions, moisture-resistant designs, and more rugged housings that better protect the unit’s electrical contacts and better absorb the shock from vibration and physical impacts.

The Need for Automation and Synchronization

Automation is vital in many B2B applications; it’s been a major driver in industrial applications. The latest sensors are capable of being triggered not just on an external trigger such as a laser sensor or GPS timing chip, but by the camera itself monitoring a region of interest and firing at the right time.

This has been particularly useful in applications such as traffic (speed/red-light) cameras. While software development kits (SDKs) for DSLR and mirrorless cameras have been available for well over a decade, they were, until recently, relatively basic. This is changing, too—they now allow for control of virtually every facet of the camera.

A good example of how they can be used is for a mapping drone. Here, it’s possible to pre-plan a route and have the SDK control the trigger based on timing or GPS location, and to adjust the aperture of the lens according to the light levels. Therefore, upon landing, the SD card is removed, and the images subsequently can be stitched together on a computer.

SDKs are frequently only available for use with higher-end (industrial/ full-frame professional) cameras, though, rather than for APS-C-based cameras. It should also be noted that not all SDKs are created equally, and companies are using them to gain a competitive edge in a fast-growing industry

For instance, in Europe, we estimate that the B2B market for mirrorless and DSLR cameras is in the region of €300 to 350 million. This means that as well as simplifying the automation process, SDKs include application libraries to speed development and support is given—in some cases with engineering resources available. As such, the standard of the SDK (and its application library/support) should be considered when selecting a camera.

One example of such increasing functionality is Sony’s version 1.03 SDK. It’s the only SDK for mirrorless full-frame cameras to enable multi-camera triggering.

Applied to ITS, this means images from multiple angles can be captured, providing the ability to prove that both a traffic offense happened, and who was driving.

However, a single image showing both often isn’t enough. Data from the German state Baden Württemberg has stated that two-thirds of its offenses go unprosecuted because the driver can’t be reliably (and cost-effectively) identified. And in New South Wales, Australia, a system to detect mobile-phone use while driving nearly didn’t go ahead because it was feared the time and cost of prosecution would be too high (Fig. 2). 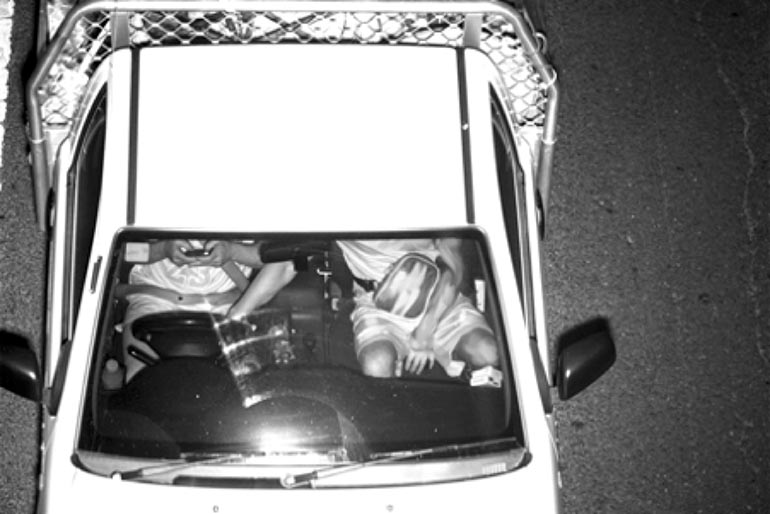 2. The New South Wales government has rolled out automated mobile-phone detection cameras to reduce fatalities on its roads. This requires multiple discrete cameras to take images from above (capturing mobile phone use), and from the front/side (capturing the number plate, driver’s face, and illegal behavior without being affected by glare).

The aforementioned factors obviously aren’t the only tradeoffs to make when considering a camera for a B2B application.

Cost is arguably among the biggest factors affecting each of the tradeoffs. It’s the reason industrial modules use smaller sensors. Deploying full-frame cameras that meet the ruggedness requirements of industrial cameras would be prohibitively expensive for most applications.

The lens lineup is also a significant consideration, with industrial modules having very few options and rarely allowing for an integrated lens design without significant expense. Conversely, a good full-frame professional camera will, in some cases, have 50+ lens options that can be deployed.

Another is focus speed, which is faster in professional cameras than in industrial units. It can be essential in applications where the camera or subject is moving quickly, such as drones or ITS.

Conclusion: Which Industries Have Reached the Tipping Point?

Several tradeoffs will dictate the camera selected by an organization. However, recent technological advances have meant the camera that best balances the resolution, sensitivity, ruggedness, weight, automation, and, of course, cost requirements of any given project is likely to have changed.

For some, the advances in ruggedness and automation in professional cameras means they can replace the more-expensive, less-sensitive industrial versions. For others, the low-weight construction methods will allow them to migrate from APS-C to a higher-resolution full-frame camera. Each industry is unique and balances each of these tradeoffs. As we’ve touched on above, some of the sectors that are at or reaching that tipping point are: