Electronics for “personal” medical devices is an area of great research interest, especially when the device can be shrunk down to a minuscule size and is easily wearable. Pursuing a well-traveled objective but with a different tactic, a team based at the Georgia Institute of Technology (Georgia Tech) has gone after the “mechanical” and vibrational signals from the heart and lungs rather than more-common electrocardiogram (EKG or ECG) and pulse-related waveforms. The project recognizes that the mechano-acoustic signals originating from the heart and lungs contain valuable information about the cardiopulmonary system.

The Georgia Tech team built a hermetically sealed high-precision vibration sensor that combines the characteristics of an accelerometer and a contact microphone to acquire wideband physiological signals. This enabled simultaneous monitoring of multiple health factors associated with the cardiopulmonary system, including heart and respiratory rate, heart sounds, lung sounds and body motion and position of an individual. It detects vibrations that enter the chip from inside the body while minimizing the pickup of distracting noise from outside the body’s core, such as airborne sounds (Fig. 1).

1. (a) The hermetically sealed sensor with nanogaps for cardiopulmonary health monitoring—a conceptual representation of the encapsulated sensor positioned on the on the chest wall (blue circle) to simultaneously monitor heart rate, heart sounds, respiratory rate, breath sounds along with body motion and position. The microsensor (2 × 2 × 1 mm) and its cross-sectional view highlight the enabling technology of high aspect-ratio (>150), ultra-thin 270-nm capacitive gap. (b) SEM image of the uncapped accelerometer contact microphone (ACM) device. The proof mass is anchored on the side using torsional tethers. (c) COMSOL Multiphysics simulation illustrating the operational mode shape of the sensor and showcasing the location of torsional tethers and sense electrodes. (d) Transducer response to normally applied acceleration with measured sensitivity of 76 mV/g and cross-axis sensitivity lower than 3%. (e) Allan-deviation plot exhibiting low-noise performance of 127 μg/√Hz.

Why bother to do this? “Right now, medicine looks to EKGs for information on the heart, but EKGs only measure electrical impulses,” said Farrokh Ayazi, Ken Byers Professor in Georgia Tech’s School of Electrical and Computer Engineering. The heart is a mechanical system with muscles pumping and valves opening and shutting, and it sends out a signature of sounds and motions, which an EKG does not detect. EKGs also say nothing about lung function.”

The core of the 2-mm2 device, which they call an Accelerometer Contact Microphone (ACM), uses two layers separated by 270 nm and a complex, sophisticated, multistep fabrication process (Fig. 2). “That very thin gap separating the two electrodes cannot have any contact, not even by forces in the air in between the layers, so the whole sensor is hermetically sealed inside a vacuum cavity,” said Ayazi. “This makes for that ultra-low signal noise and breadth of bandwidth that are unique.” 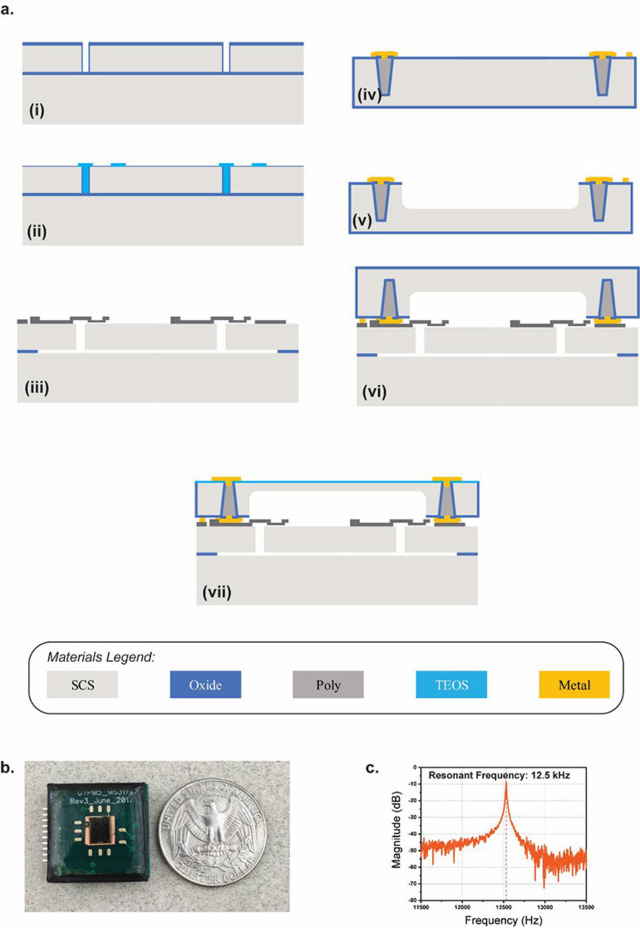 2. (a) Cross-sectional view showing fabrication of the ACM. (i) The (100) silicon-on-insulator (SOI) wafer with 40-μm device layer as the base layer. Trenches are etched using deep reactive-ion etching (DRIE) in the device layer. (ii) The trenches are then filled using low-pressure chemical-vapor deposition (LPCVD) tetraethyl orthosilicate (TEOS). The exposed region is thermally oxidized to form the top sacrificial oxide layer (270 nm in thickness) for the sense electrodes. (iii) Polysilicon is deposited and patterned for the sense electrode. The wafer is released in hydrogen-fluoride (HF) solution using a supercritical point drier. (iv) The capping wafer is on a silicon wafer; through-silicon vias (TSV) are formed using deep polysilicon pillars with oxide isolation. (v) A deep cavity is etched using DRIE, whose depth is engineered to control the package pressure level. (vi) The capping wafer is then bonded using high-vacuum eutectic bonding. (vii) The capping wafer is ground to expose the TSV, which is followed by plasma-enhanced chemical vapor deposition (PECVD) oxide and metal electroplating to form the electrical routing on the packaged device. (b) Vibration sensor interfaced with readout electronics on a miniature circuit board (2 × 2 cm) with protective epoxy coating. (c) Measured resonance frequency of 12.5 kHz of the microsensor under vacuum conditions.

The ACM provides an interesting and unconventional “seismocardiogram” perspective of the patient’s situation via new perspectives; it’s especially useful when its signals are also correlated those of the traditional EKG (Fig. 3). For example, among the results of their clinical tests on a select group of patients, the researchers successfully recorded a “gallop,” the faint third sound after the “lub-dub” of the heartbeat. These gallops are normally elusive clues of heart failure. 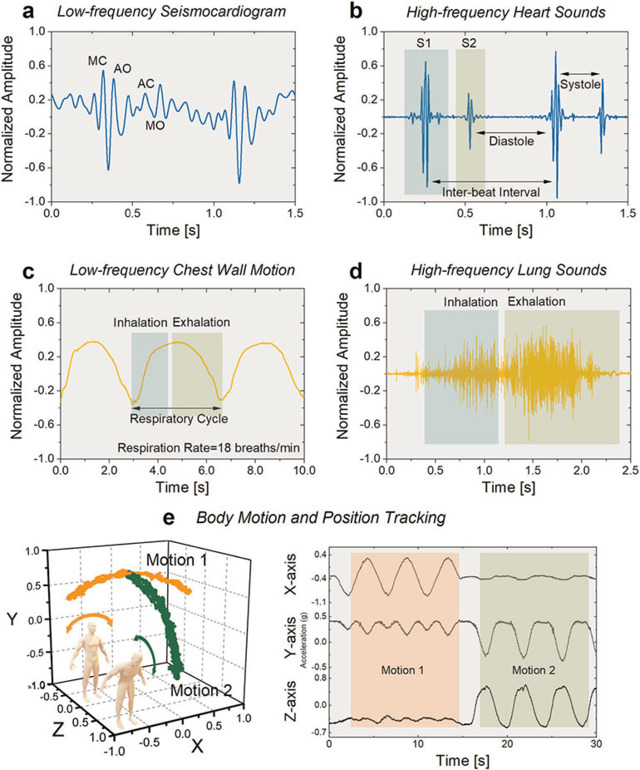 The researchers published their results in the Nature journal njp Digital Medicine, “Precision wearable accelerometer contact microphones for longitudinal monitoring of mechano-acoustic cardiopulmonary signals,” along with detailed Supplementary Notes that look in more detail at the raw data, noise, ambient effects, test arrangements and analysis of acquired data. The research was funded by the Georgia Research Alliance, the Defense Advanced Research Projects Agency (DARPA), the National Science Foundation and the National Institutes of Health.