Many Americans can relate to the weight challenge that faced Branch Technology in a project at Field Museum in Chicago. Instead of shedding a few extra pounds after the holidays, the 3D printing company worked with engineers from Chicago Flyhouse to face a task that involved safely supporting approximately 28 tons in a facility that attracts more than 1.65 million visitors annually.

Branch Technology’s solution involved the use of its patented additive manufacturing process to create unique architectural products. Chicago Flyhouse devised a solution that included the use of an energy chain manufactured by igus, the Germany-based manufacturer of motion plastics.

“We have done many projects of this scale and larger,” said David Millard, the project manager for Chicago Flyhouse. “We specialize in the unique and difficult. This fits the criteria of a unique and difficult project that requires immense attention to detail and aesthetics.”

The project centered on the task of showcasing plants from a prehistoric era in a hanging garden called Nature Clouds. The four clouds are part of the Griffin Dinosaur display, which stretches across 21,000 sq ft at the museum’s Stanley Hall. It includes the world’s largest dinosaur, a 122-ft-long cast from the fossil bones of a prehistoric beast from Argentina.

The clouds, created by Branch Technology, make up the world’s first freeform 3D-printed garden. The clouds are assembled from 279 parts that weigh 4,000 lb. The clouds contain 12,000 lb of vegetation and support 9,600 lb of steel. The largest cloud system of the installation weighs around 17,500 lb.

The clouds would have weighed significantly more; however, Branch employed its patented Cellular Fabrication (C-FAB) method to create the form and structure of the clouds.

“This project was possible due to our unique direct digital production process,” said John McCabe of Branch Technology. “We create precise volumes using 20 times less material than traditional 3D printing methods, which fundamentally reduced the weight of the project.”

Instead of layering material in a fused deposition approach, the most common method for 3D printing, Branch’s freeform printing technology uses minimal materials to build the intended form. For the Nature Clouds project, Branch Technology created a matrix of fiber-reinforced polymers that solidify in the air as they are extruded to create lightweight shapes.

While reduced weight is the most significant advantage of this method, the system provides design flexibility with speeds faster than traditional printing methods.

“The parts are created like Lego blocks,” McCabe said. “We begin by analyzing any logistical constraints. Will it fit through the available doors? Can it fit in the elevator? We have to identify where the pinch points are to make sure the parts are not too big. These final ‘panelized’ parts typically align to a scale appropriate for the on-site teams to quickly assemble.” 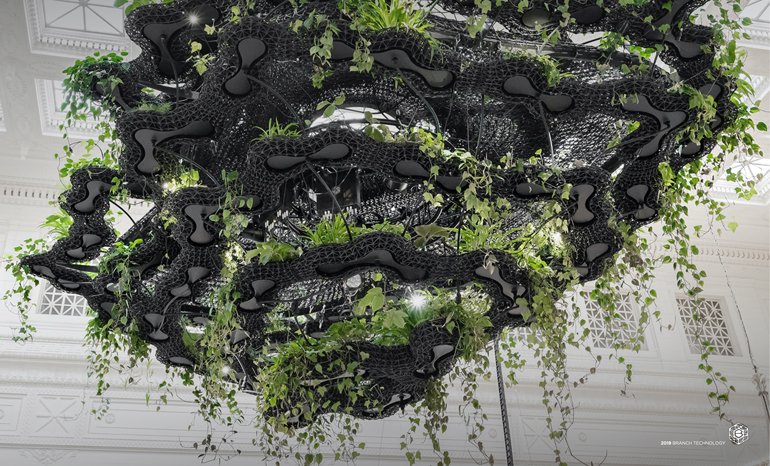 By any standard, the clouds are exceptionally heavy, but Branch made them as light as possible due to the museum’s age—the structure was built in 1921—and Chicago Flyhouse needed to devise a solution for safely raising and lowering the clouds.

“We did all the rigging during regular hours while no part of the museum was closed to visitors,” Millard said. “This required us to develop a custom suspended floor structure that was capable of supporting 28 tons over a 1,250 sq ft surface that acted as a hoist and as a protective layer between our work and the general public 75 ft below us.”

The hoists for the clouds were custom-designed and manufactured by Flyhouse. More specifically, they are wire rope hoists with custom double helix groove zero fleet drums. Flyhouse designed a system that includes three hoists—two large capacity and one medium capacity. The hoists have redundant braking and cable management systems, with a lift capacity ranging between 5,000 and 19,000 lb. 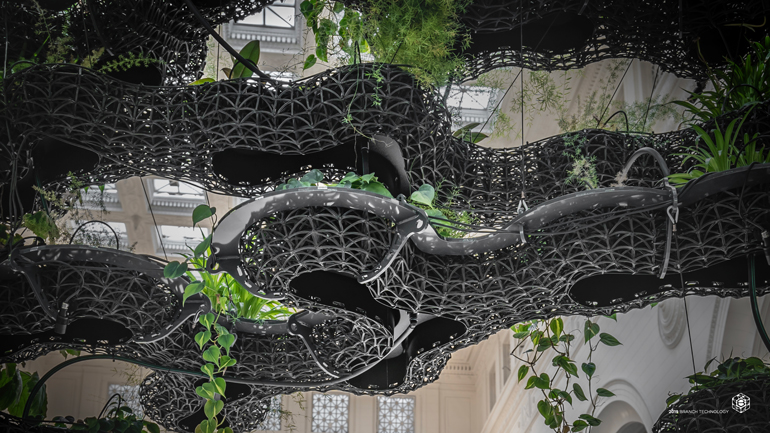 Besides the hoists, Flyhouse workers also needed to devise a cable management solution with an energy chain from igus. The solution they implemented included a 75-ft energy chain. They created a pulley that pulled the chain at the bend instead of the pushing or pulling from the end. The chain also carried data cables from igus to help sustain the plants.

“Since we are moving the middle of the chain, it moves at twice the speed of the pulley at the bend in the chain, making in sync exactly with the moving cloud,” Millard said.

While the energy chain is standard for igus, what is unique is the way in which it was used.

“Supporting it at the center with our custom pulley and controlling its movement from there instead of one of the ends is what makes this unique,” Millard said.

An important feature of the energy chain from igus is its capacity to include igus’s chainflex cables. The cables provide water, power and fiber optics to the plants. Four of the chainflex cables, such as those for fiber optics and air line for water, are 100 ft long. There is also a 300-ft cable, which is typically used in heavy-duty indoor applications and in high-bay warehouses, packaging machines and indoor cranes. The cables have a long service life and require little maintenance.

“It has been our experience that cable reels are unreliable in the long term, and we needed a solution that was going to mechanically move the cable and hoses in sync with the hoists,” Millard said. “The key was to prevent the system from adding complexity, such as synchronized motors.” 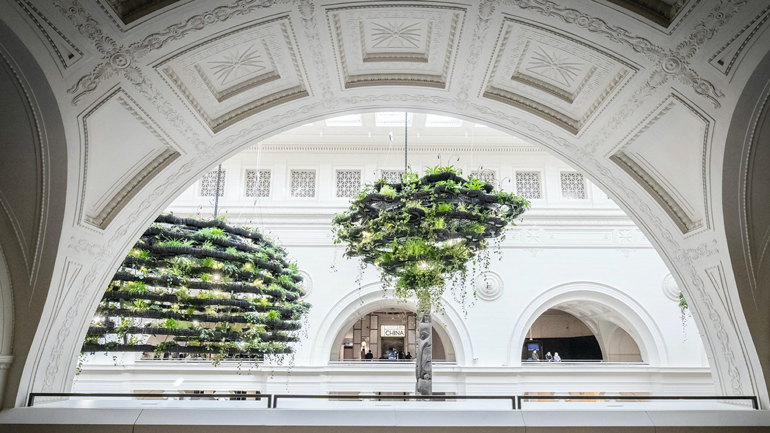 Tied Together by Teamwork

The level of coordination and communication for the project exceeded what is usually required for all of the teams involved. It took over a year of planning before Branch Technology, Chicago Flyhouse and igus could start work in the museum.

“Integrating all of the other contractors was one of the biggest challenges we faced,” McCabe said. “The lighting, the audio hardware, the energy system, that all had to be coordinated. We did a few physical mock-ups to make sure everything worked. There were a lot of building codes that had to be met, as well.”

It is hard to make such an expansive area—the square footage is more than four times that of a basketball court— feel cozy and welcoming. Yet, that is exactly what the project required. The building is one of Chicago’s premier event spaces for weddings, galas and more.

“The plants make the hall come alive—they look beautiful and underscore our mission to study and preserve the natural world,” said Hilary Hansen, Senior Exhibition Project Manager for the Museum, in an article by Curbed Chicago. “They’ll break up the imposing scale of Stanley Field Hall and soften its hard materials, making it a welcoming place to sit and enjoy nature.”

Dan Thompson is the energy chain product manager for igus.