How to Design an Optimal Electronic Load for High-Current, Low-Voltage Power Supplies (Part 1)

Part 1 of this series focuses on high-performance electronic loads for testing power supplies that have low output voltage and high current. It describes the necessity for special electronic loads, such as special electrical characteristics that are required, including a comparison between “off-the-shelf” test equipment and specially designed load circuits.

Electrical power requirements for modern CPUs, GPUs, FPGAs, and ASICs continue to increase, both in magnitude and performance. Supply-current requirements have risen to the hundreds of amperes, and power-supply bandwidth needs to be above 100 kHz to meet stringent transient-response requirements. At the same time, supply voltages are trending downward, with most core voltages now below 1 V and some as low as 300 mV. These trends make it more difficult to characterize the performance of a suitable power supply using conventional “benchtop” electronic loads.

Commercially available electronic loads combine excellent precision with sophisticated control interfaces and are generally capable of sinking very high current at high power. A good example is the Chroma 63600 series. Several different models are available in this series, each tailored to a different range of voltage, power, and current. The model with the lowest headroom requirement is the 63640-80-80, which can sink about 80 A from a 400-mV supply (Fig. 1). This operating point reveals that its lowest achievable resistance is near 5 mΩ. Each of these loads can sink up to 80 A, limited to 400 W.

This is impressive performance. But to test a 300-A, 0.8-V power supply, at least four 63640-80-80 load modules must be combined in parallel—both to achieve an effective on-resistance below 2.7 mΩ and to handle the total current. The Chroma 63600-5 Load Mainframe allows us to do that: It combines up to five load modules in a single chassis, with coordinated control and measurement functions.

However, despite those specifications, the overall performance of an array of benchtop loads is fundamentally limited by its electrical connection to the supply under test. For example, Figure 2 shows how a high-current power supply might be connected to a bank of electronic loads for testing. 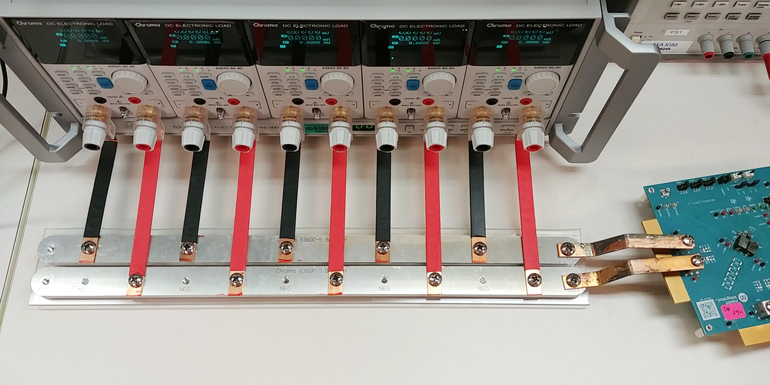 2. Shown is a parallel array of benchtop electronic loads with bus bar connections to an evaluation kit.

Copper and aluminum “busbar” conductors are used to make the connection, with five electronic load modules operating in parallel to handle the current and power. Unfortunately, the form factor of this test setup requires high-current conductors to span 40 cm or more, and this path length imposes significant resistive loss between the supply under test and the load modules. This added resistance cuts into the voltage headroom at the load, and parasitic inductance LP in the conductors sets an inescapable upper limit on the maximum load transient slew rate that can be achieved:

Vexingly, the more individual loads that are combined in parallel, the larger the test setup becomes and, accordingly, more resistive and inductive losses are incurred in the connection bus. Clearly, to achieve the highest slew rate and lowest total resistance, a more specialized electronic load solution is required.

To emulate the behavior of the semiconductor device being powered, we need an electronic load with all of the following characteristics:

The simplest load we can conceive is a power resistor. If sized and cooled correctly, it could satisfy the requirement for high power dissipation, and current can be monitored directly (by measuring the voltage across the known resistance). Adding a switch in series makes it possible to generate a load transient. However, the load will either be fully on or completely off, and the current would depend on the voltage under test. The current slew rate is neither controlled nor adjustable. Clearly, this isn’t a flexible solution that can be adapted to a wide range of testing requirements.

To provide variable load and controllable current slew rate (the rate at which the load current rises and falls), it’s necessary to construct an active current-sink circuit based around an operational amplifier. The topology of this circuit is shown in Figure 3. An op amp drives the gate of a power MOSFET to establish a controlled voltage across a sense resistor. This results in a controlled load current that flows from the drain to the source of the MOSFET and through the sense resistor to ground. The power MOSFET adds current gain but doesn’t add voltage gain because it’s operating as a common-drain amplifier, also known as a source-follower. 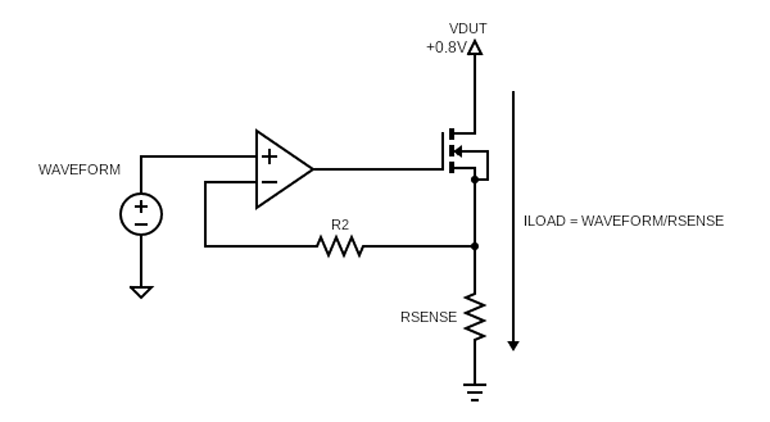 3. This is a basic active current-sink circuit.

A practical implementation of an active current-sink circuit with an n-channel MOSFET is shown in Figure 4. This circuit is a marriage of the simple current sink of Figure 3 and a differential amplifier. This topology improves precision by accounting for dynamic and static differences in ground potential between the input signal (SGND) and the low side of the sense resistor (GND).

The load current developed by this circuit is proportional to the voltage of a control signal (labeled Load Waveform in Figure 4), with gain set by the ratio of the input and gain-setting resistances. For example, using the principle of superposition to analyze the circuit of Figure 4, we see that the current follows the input signal, scaled by the gain of 1/2 and the sense resistance.

Figure 5 shows one way that a second amplifier can be added to report the load current. In this case, it’s configured as a transconductance amplifier to allow for easy summing of the current-measurement signals from multiple current-sink circuits. 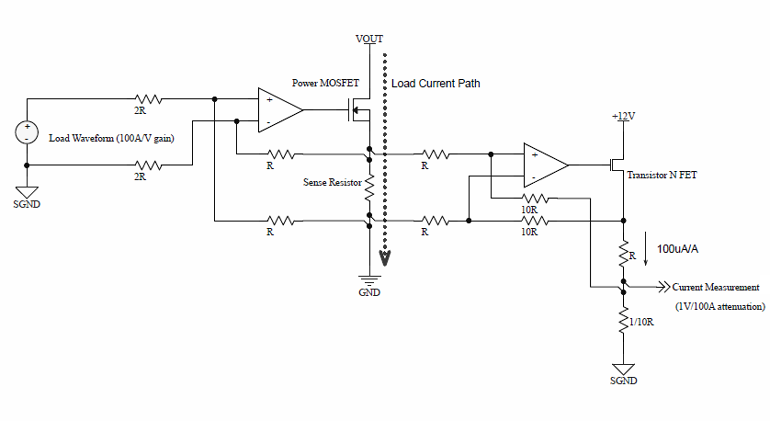 5. A transconductance amplifier is used for current measurement.

With the fundamentals of the active electronic load circuit in hand, the next part of a successful design is component selection and circuit layout. Please watch for the second part of this three-part series for more insights.