Strain—the response of a material to an applied stress due to an applied force or weight—is an important physical parameter in any application ranging from bridge monitoring to IC die packaging and even human-body measurements. The challenge is that most strain sensors and gauges have sensitivity limits at the lower ranges as well as limited dynamic range, so the quest continues for innovative approaches to strain sensors.

Addressing this challenge, a team at University of Sussex (Brighton, U.K.) led by Marcus O’Mara developed a unique process for incorporating a graphene nanosheet coating with a silicon rubber-like polydimethylsiloxane (PDMS) core in a structured, controllable material. The resulting composite has excellent electromechanical properties and can be used as an extremely sensitive, wide-ranging strain gauge, yielding what the researchers maintain is the world’s most sensitive strain sensor.

Note: PDMS is widely used in many healthcare, aerospace, food, and microfluidics applications due to its many desirable attributes. It’s biocompatible, elastic, transparent, durable, has minimal shrinkage on curing, and its specific formulation can be tailored to trade off some of its properties.

Standard strain gauges have relatively low sensitivity and strain range, with gauge factors (the ratio of relative change in electrical resistance to the associated mechanical strain) typically ranging from 2 to 5 with maximum strains of 5% or less. As a result, the measured resistance increases by a modest amount of less than 25%, thus preventing high-strain sensing required for bodily motion monitoring.

The new sensors are able to detect strains of less than 0.1% due to their higher gauge factor of approximately 20 along with up to 80% strain, with an exponential response leading to the resistance changing by a factor of more than one million. In this case, nonlinearity and exponential characteristics are a virtue. Such characteristics are commensurate with needs of both high-sensitivity low-strain medical-related sensing for pulse monitoring and high-strain measurement of chest motion and joint bending as a result of the record resistance change.

Alan Dalton, Professor of Experimental Physics, said, “Our research has developed cheap, scalable health-monitoring devices that can be calibrated to measure everything from human joint motion to vitals monitoring. Multiple devices could be used across the body of a patient, connected wirelessly and communicating together to provide live, mobile-health diagnostics at a fraction of the current cost.”

To create these strain-sensitive devices, the researchers developed a process for preparing structured nanocomposites of graphene and PDMS. They identified a solvent system that enables the production of high-quality oil-in-water emulsions, in which graphene nanosheets assemble to stabilize PDMS-containing droplets (Fig. 1).

1. Emulsion formation and characteristics: (A) Schematic diagram of an interfacial nanosheet within the present system. The interfacial energies are labeled at the three-phase boundary. (B) Schematic of oil-in-water (o/w) and water-in-oil (w/o) emulsions, where the droplet phase is stabilized by a layer of nanosheets and the relative magnitudes of γsw and γso determine the orientation. (C) Photograph of o/w and w/o emulsions where phase transition was brought about by altering the ratio of ethylene glycol (EG) to water, and therefore γw. Scale bar is 5 mm. (D) Optical micrograph of a w/o emulsion with 0.44 vol% graphene relative to the droplet phase. Scale bar is 1 mm. (E) Phase diagram highlighting the parameter space for the system, where the phase inversion threshold marked (Equation 1) is defined using the surface energy of graphene, γs = 66 mJ/m2. The surface tensions of water, EG, dichloromethane (DCM), ethyl acetate (EA), and PDMS are marked. (F) Relationship between graphene content φ and droplet size distribution. Inset: Average droplet diameter ⟨d⟩ versus φ. (Note: γ is the surface energy of a given phase or between phases where subscripts o, w, and s refer to oil, water, and surface stabilizer, respectively.) (Source: University of Sussex)

Further, by modifying the processing conditions, these emulsions can be cured, resulting in various configurations including microspheres and nanocomposite films. The specifics are discussed in their detailed paper “Ultrasensitive Strain Gauges Enabled by Graphene-Stabilized Silicone Emulsions” published in the journal Advanced Functional Materials, and is enhanced by Supplementary Material that also covers some of the associated electronics. (The work was made possible thanks to the support of U.S.-based Alliance Rubber Co.)

In addition to the formal tests to evaluate the performance of the sensor, they also performed “live” on-subject tests (Fig. 2), where they placed a sensor on both the neck and chest while the electrical response was recorded. The pulse was clearly detectable when the sensor was gently pressed against the carotid artery with a narrow peak at 59 beat per minute (bpm) extracted from the Fourier transform. When placed on the chest, the sensor was able to sense both the high-strain, low-frequency modes associated with breathing and high-frequency, low-strain modes associated with a pulse. 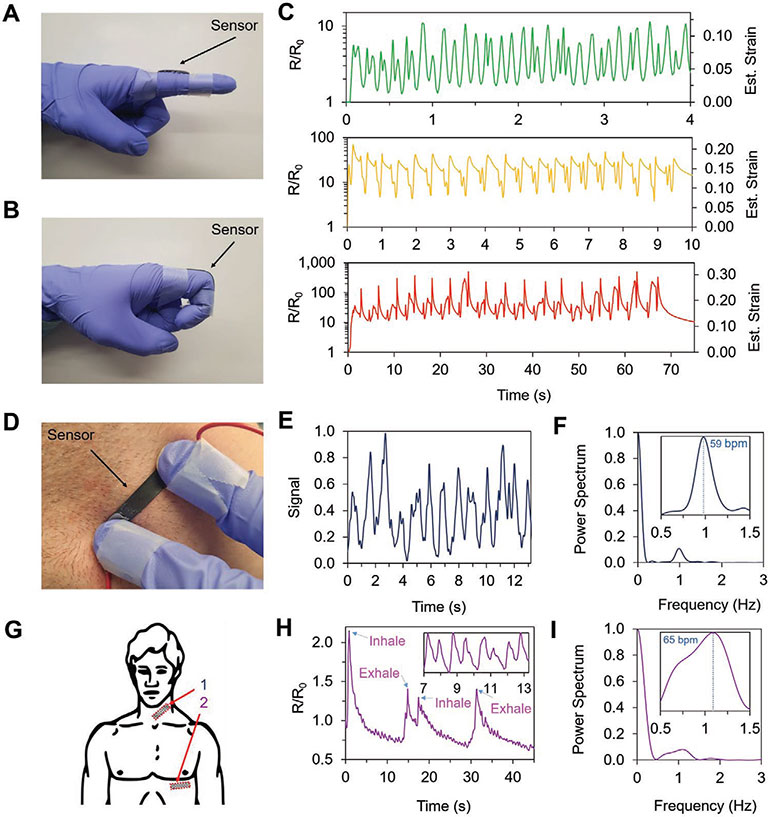 Dr. Sean Ogilvie, Research Fellow in Materials Physics at the University of Sussex, added, “Commercial strain sensors, typically based on metal foil gauges, favor accuracy and reliability over sensitivity and strain range. Nanocomposites are attractive candidates for next-generation strain sensors due to their elasticity, but widespread adoption by industry has been hampered by nonlinear effects such as hysteresis and creep due to the liquid-like nature of polymers at the nanoscale, which makes accurate, repeatable strain readouts an ongoing challenge. Our sensors settle into a repeated, predictable pattern, which means that we can still extract an accurate read-out of strain despite these effects.”